Accessibility links
Hillary Clinton Picks Tim Kaine As Her Vice Presidential Running Mate The Virginia senator and former governor is a loyal ally who can help reach out to Hispanics and may be able to woo disaffected independents or moderate Republicans who are turned off by Donald Trump. 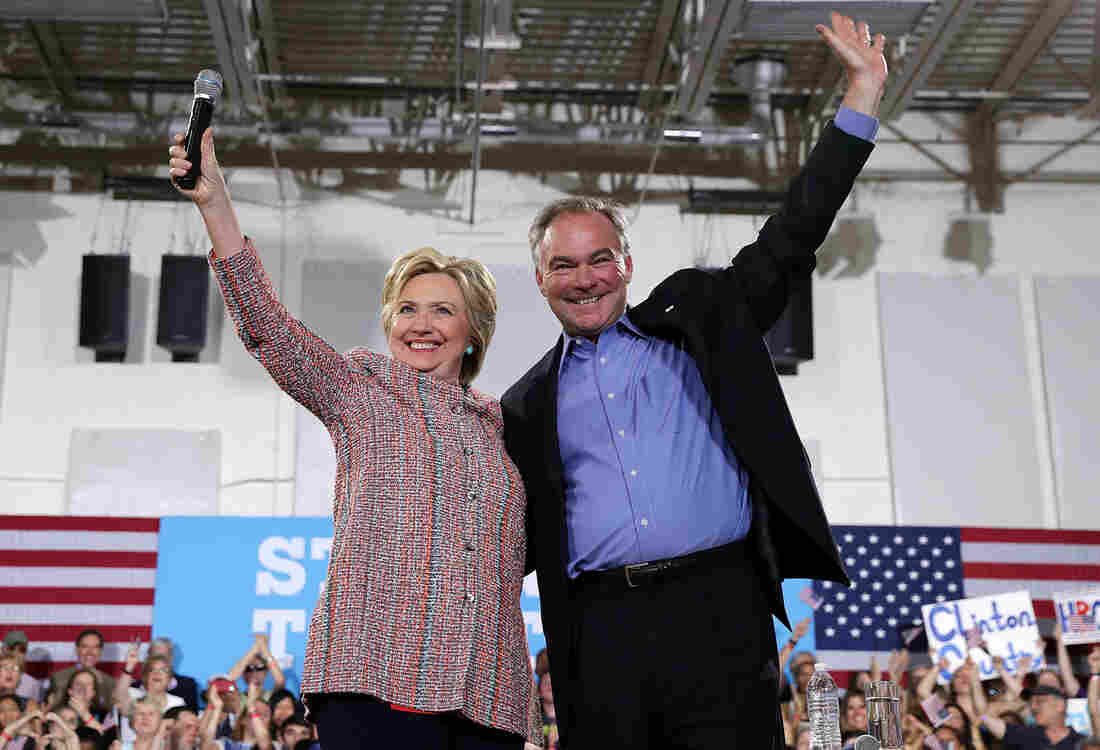 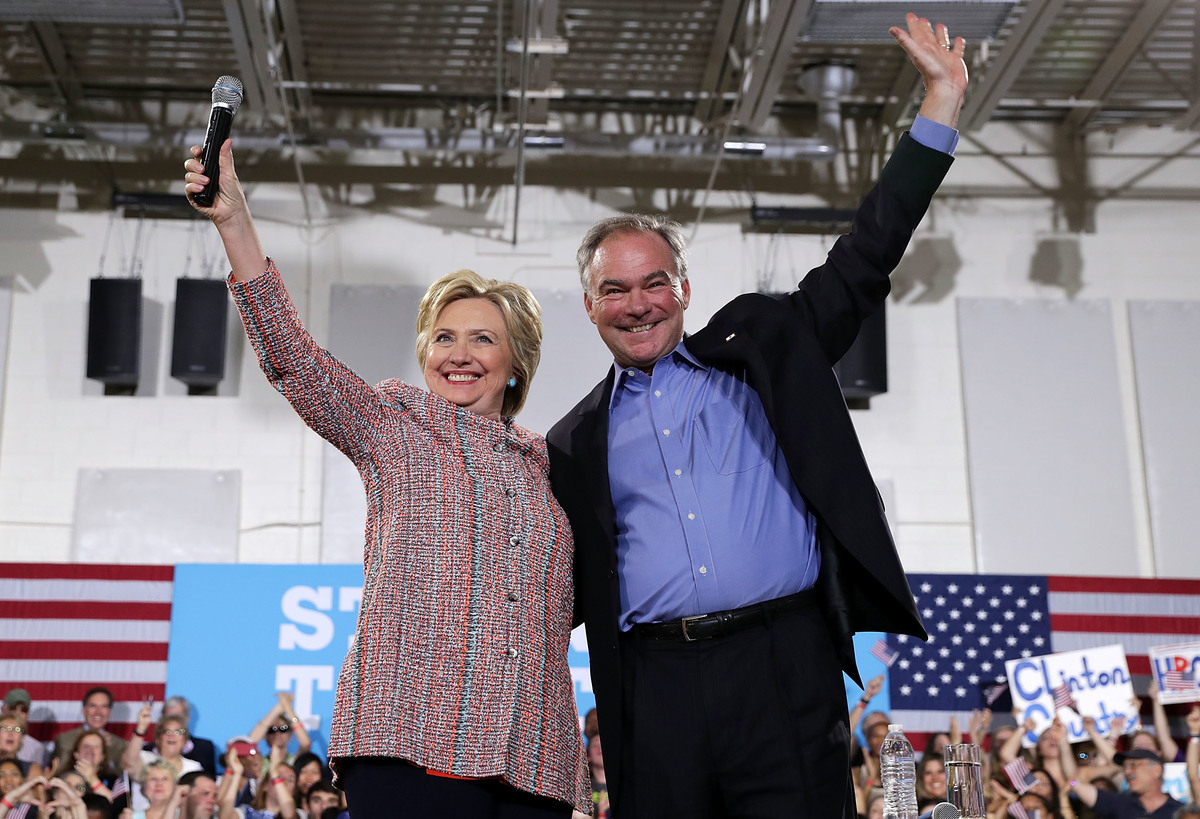 Democratic presidential candidate Hillary Clinton and Sen. Tim Kaine of Virginia greet the crowd during a campaign event on July 14 in Annandale, Va.

Virginia Sen. Tim Kaine is Hillary Clinton's choice for her vice president, giving her a running mate with experience at all levels of government to round out the Democratic ticket.

Clinton told supporters the news in a text message and a tweet on Friday evening just after 8 p.m. ET. According to a Clinton campaign official, the former secretary of state called Kaine this evening to make the formal offer.

In recent days, Kaine had emerged as the favorite — albeit safe — pick for Clinton, over other finalists such as Agriculture Secretary Tom Vilsack, Labor Secretary Tom Perez and New Jersey Sen. Cory Booker.

According to the Clinton campaign official, their vetting process first began back in April with more than two dozen potential running mates. Kaine and Clinton campaigned last week in Northern Virginia as a tryout of sorts, and Clinton walked away impressed and comfortable with him as a partner. The two met with aides and then one-on-one for a total of about 90 minutes that night.

Last Saturday, Kaine and Clinton met together with their families for lunch at the Clintons' home in Chappaqua, N.Y. She remained comfortable with Kaine as someone who could do the job, and the alliance was made.

Kaine's addition to the ticket gives her a loyal ally who can help reach out to the Hispanic community and possibly woo disaffected independents or even some moderate Republicans turned off by Republican nominee Donald Trump.

He is a low-risk pick, comes from a swing state that has become increasingly crucial in presidential elections, has a reputation as a moderate who works across the aisle, and doesn't overshadow the top of the ticket. In fact, in an interview last month on NBC's Meet the Press, Kaine even admitted, "I am boring."

Kaine was a finalist eight years ago in President Obama's vice presidential search, and he had endorsed the then-Illinois senator early on. This time, he joined the "Ready for Hillary" bandwagon before she even announced.

The 58-year-old is a former housing lawyer who took off time from law school to work with Jesuit missionaries in Honduras, during which he became fluent in Spanish. Kaine got his start in politics on the Richmond City Council and later became the mayor of the Virginia capital. In 2001, he was elected the commonwealth's lieutenant governor.

In 2005, he won a hard-fought race against then-Republican Attorney General Jerry Kilgore, helped by strong margins in the Northern Virginia suburbs and exurbs. His father-in-law is also a former Virginia governor.

Kaine's tenure as governor (Virginia is the last state that still limits its governors to a single four-year term) was marked by the deadly shooting at Virginia Tech in April 2007. He was praised for his response to the shootings, gathering a panel to investigate the school's response and push for more mental health reforms.

He struggled as governor, though, as the recession hit in 2008, and he unsuccessfully tried to push through a tax hike to fund his budget proposals. He was an early supporter of President Obama in the 2008 primary over Clinton.

After Obama won, he tapped Kaine to lead the Democratic National Committee, and Kaine served as both chairman and governor for a year — something that drew some criticism within the state. He was chairman of the DNC during the disastrous 2010 midterm elections for Democrats that saw them lose the House. And his time atop the party committee may have chipped away at some his moderate credentials.

He left the DNC in 2011 but jumped back into politics in 2012 to run for the Senate. He easily defeated former Republican governor and Sen. George Allen. In the Senate, he has been praised for building relationships on both sides of the aisle, and he could help Clinton with her legislative priorities in Congress.

Kaine sits on the Senate Foreign Relations and Armed Services committee and has been less hawkish than Clinton in some instances. He has said the Obama administration needed to get authorization from Congress to use force against ISIS, and he has been critical of Congress for not granting an Authorization for Use of Military Force.

Some of his more centrist positions have upset some past supporters of Clinton's former rival Bernie Sanders, many of whom wanted her to make a more progressive pick. Kaine is a supporter of free trade deals, and as his vice presidential stock began to rise, many progressive groups voiced their displeasure. But, as other observers have noted, the Minnesota native, who was raised in Kansas City, Mo., could help Clinton appeal to one of her weakest demographic areas — white, working-class men in the Rust Belt, a group where Trump has an advantage.