Accessibility links
'Multiple Choice' Is A) A Novel, B) In Test Form, C) Fascinating, D) All Of The Above Alejandro Zambra's playful new novel is fashioned in the format of Chile's Academic Aptitude Test, the standardized exam high school students there take — complete with multiple choice questions.

'Multiple Choice' Is A) A Novel, B) In Test Form, C) Fascinating, D) All Of The Above

'Multiple Choice' Is A) A Novel, B) In Test Form, C) Fascinating, D) All Of The Above 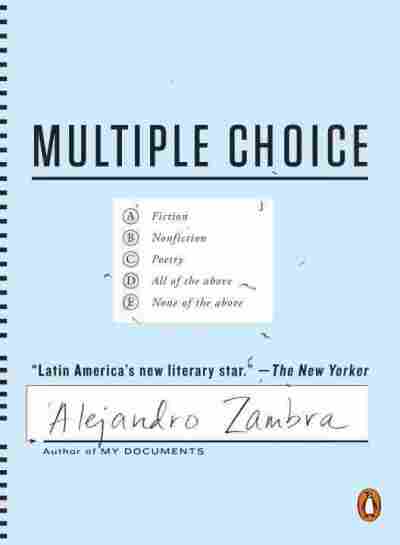 There are some books that make you acutely aware that you are Reading a Book.

In The Game of Literature and Some Literary Games, Elizabeth Bruss explains that, when readers engage with books like that, they make many choices that in turn affect the overall experience. "Literary games," she writes, "exist wherever praxis and strategy provide the principal meaning of the work."

A higher level of give and take between reader and writer is what gives specific works of literature a more "game-like" quality than others. They are not unlike chess, or even the basic principles of a sword fight. They are a complex exchange, made up of various moving parts of which a discerning reader is well aware.

Jorge Luis Borges was a genius at this kind of experimentation; his philosophical literature is one of labyrinths and secret doors, mazes and libraries. Julio Cortázar's Hopscotch, another singular force, is comprised of chapters which can be read in any order, leaving much up to the individual reader. A more recent example of achievement in experimentation is Rivka Galchen's Little Labors, a dazzling book whose enchanting structure makes the reader aware that they are engaged in the activity of reading.

For years now, the Chilean novelist Alejandro Zambra has been staking out a place in the game of literature. While many of his novels err on the short side, they are consistently ambitious and captivating, almost cleansingly so. His sentences can be at once dynamite and quietly disarming. And they are at their best when lingered over and given the necessary time to grow, like a plant in winter.

In Multiple Choice, Zambra's latest novel, his game is at its most direct. Translated by Zambra's longtime translator Megan McDowell, Multiple Choice is fashioned in the format of the Chilean Academic Aptitude Test, a standardized exam which students take prior to applying to university. The book is broken up into five numbered sections, totaling 90 questions. If that sounds off-putting, if you despised exams in school and have doubts about how such a book might actually be enjoyable, allow me to quell your doubts. Although Multiple Choice gets off to a slow start — the first section, titled "Excluded Term," is laid out like a round of word association — the patient reader will benefit from that great virtue. The sections that follow, which range from the hilarious to the deftly serious, include cerebral exercises on Sentence Order, Sentence Completion and Sentence Elimination.

Throughout 'Multiple Choice,' Zambra traffics in a depth of imagination and playfulness that is akin to a guessing game.

Reading Comprehension is the longest section, and includes three short stories. In "Text #1," the smarter of the Covarrubias twins takes the exam for his brother so that he too can be accepted to study law at the University of Chile. "Luis Covarrubias registered, presenting his brother Antonio's ID card, to take the test for the second time. And he gave it his all. He tried so hard that he got even better scores than he had the year before: In fact, he received the nation's highest score on the Social Studies test."

Then the "Questions" section following the text presents eight questions to measure the reader's overall comprehension. Question 68 asks the reader what the best title of the story would be. "(A) "How to Train Your Twin" (B) "To Sir, with Love" (C) "Me and My Shadow" (D) "Against Lawyers" (E) Against Twin Lawyers""

"Text #2," a story about a young couple who married at a time when divorce was still illegal in Chile, is as much about Chilean identity and booze and Pinochet as it is about love and broken relationships. It begins: "I suppose we were happy on our wedding day, though it's hard for me to imagine it now."

One follow-up question asks: "In your opinion, who is the victim and who is the victimizer, respectively, in this story?" "(A) The bride / the groom (B) The poet / Maite (C) Chile / Chile (D) Liver / concoction (E) Liquor / beer"

Throughout Multiple Choice, Zambra traffics in a depth of imagination and playfulness that is akin to a guessing game. As with many of his earlier works, he is content to play with, prod, and shake up the reader, confirming once again that the questions we ask about the world and about ourselves are oftentimes far more telling than the answers.