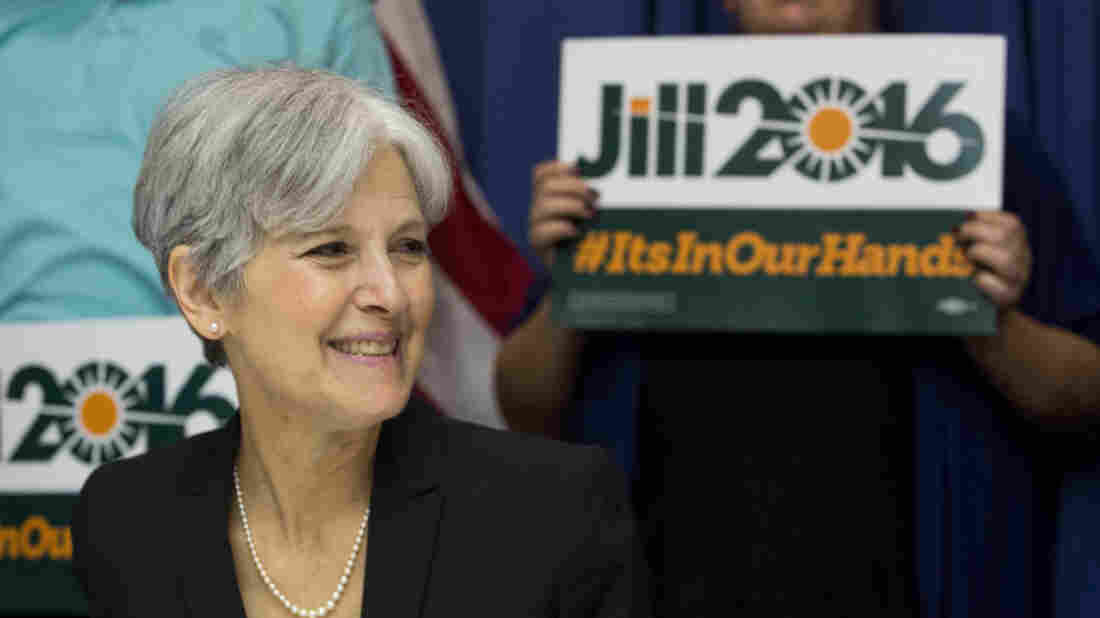 Jill Stein is leading the Green Party ticket. She hopes to capitalize on the wave of support for Bernie Sanders. Drew Angerer/Getty Images hide caption 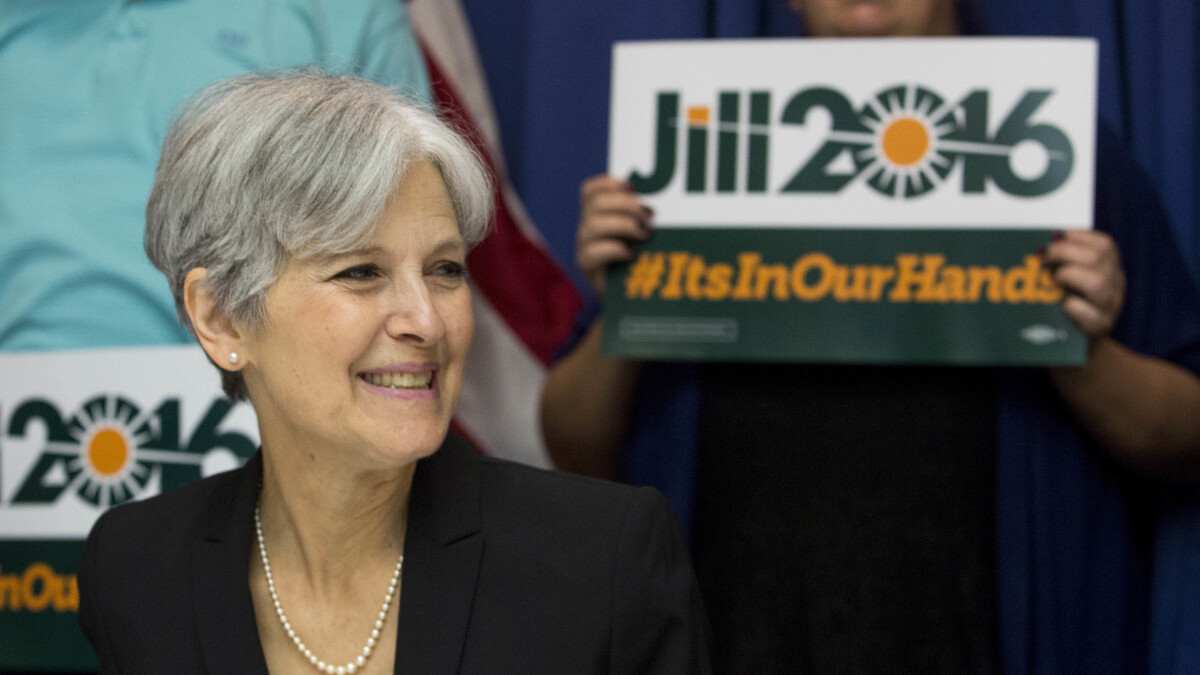 Jill Stein is leading the Green Party ticket. She hopes to capitalize on the wave of support for Bernie Sanders.

Third parties are not new to American politics. The Anti-Masonic Party emerged in the 1820s to campaign against the Freemasons, which its members viewed as corrupt. The Free Soil Party opposed the expansion of slavery in the years before the Civil War. Others throughout history have emerged to champion various causes, like the Know-Nothings, the Progressives, the Prohibition Party, the Reform Party and many others.

In a country that's been dominated by iterations of the Republicans and Democrats for more than a century and a half, 58 percent of respondents told Gallup pollsters in 2014 that "a third party is needed."

Today the biggest third party in the U.S. is the Libertarian Party, which has taken a new prominence as it courts Republicans who have refused to fall in line behind the party's nominee, Donald Trump. Gary Johnson, the Libertarian nominee in 2012 and again this year, amassed 1.27 million votes in the last presidential election.

On the other end of the spectrum is the Green Party. The party traces its history to 1984. Its platform focuses on environmental issues and "social justice, peace and non-violence, local and regional self-management and grassroots democracy." In 2000, 2.8 million people voted for Ralph Nader as the Green Party presidential candidate — leading to accusations of "spoiling" the election for Al Gore, a charge Nader has rejected.

This year Dr. Jill Stein is leading the Green Party ticket for president. She has run before — Stein garnered almost 470,000 votes in 2012 running as a Green.

Stein is hoping to capitalize on the wave of support Bernie Sanders experienced over the past year in his challenge to Hillary Clinton from the left. Stein told The Guardian she would even be willing to let Sanders run in her place as the Green candidate. Sanders didn't respond and has now endorsed Clinton.

Stein is heading to Philadelphia to go to the Democratic National Convention — or at least to be outside of it. She is planning to take part in protests on the street in support of "economic justice" and a "Green New Deal," among other causes.

She talked with NPR's Michel Martin about why she's crashing the party in Philadelphia and responds to criticism from columnist Dan Savage.

On what the Green Party stands for

In a nutshell, the Green Party is the one national party that does not accept corporate money, lobbyist money, or have a superPAC. So we have the unique liberty to stand up for everyday people. We are basically a party that puts people, planet and peace over profit. And we put forward the real solutions that everyday Americans are just clamoring for.

On why they're going to Philadelphia

We'll be in Philadelphia to be at the convention in the streets — the people's convention. I will be marching in the "March for Our Lives." We'll conclude that march with a "Power to the People" rally, which is sponsored by my campaign. And we are here especially for the Bernie Sanders movement that does not want to go back into that dark night, into the Hillary Clinton campaign, that for so many people represents the opposite of what Bernie was building and what they were building.

5 Things To Watch In Philadelphia This Week

We are here to provide the support for that campaign. I think so many people learned that you cannot have a revolutionary campaign inside of a counter-revolutionary party. So we are here as plan B for Bernie to ensure that this fight will go on.

I do not say there is no difference between the parties. What I say is that there's not enough difference to save your job, to save your life, or to save the planet. And the scary things, the horrific things that Donald Trump says, Hillary Clinton has already done. Whether it's massively deporting immigrants, whether it's threatening nuclear warfare. ...

We have hundreds of candidates, and unfortunately the media pays no attention to them, so of course the likes of Dan Savage have no clue. Not only do we have candidates, but we have had scores of elected officials. Including, for example, the mayor of Richmond, Calif., who was the Green mayor, Gayle McLaughlin, for eight years, where they did incredible, transformative things.

This is why the corporate media and the corporate political parties don't want you to know that in fact, this revolution is alive and well. And it's especially alive in the Green Party, because all of the other noncorporate parties that have challenged power — whether you're talking about the Progressive Party or the Labor Party — they have been wiped off the map. They've been absolutely wiped off the map. So it's only the Green Party that survives as a noncorporate, truly people-powered challenge. And we are challenging all over the place. So Dan Savage doesn't have a clue about the fight that is going on. And if I weren't running for president, no one will know.

This is why Frederick Douglass said, "Power concedes nothing without a demand. It never [did] and it never will." We have to bring that demand up into the highest headliner as possible.

Why give them a pass to conduct these wars? Hillary Clinton cannot challenge Donald Trump, because she agrees with him on too many things. Like these outrageous wars, like nuclear weapons, like devoting half of our budget and more to militarism. Half of your income tax is going to militarism — $75,000 per American household has been spent when you include the health costs of the Afghanistan and Iraq wars. ... These wars on terror that have done what? Created more terror, have created failed states, have created mass refugee migrations.

We both support open debates, for example. We share two lawsuits between our two parties — we are both suing the Commission on Presidential Debates. Because Americans have a right not only to vote, but to know who we can vote for. So we are suing to open debates.

But where we differ: The Libertarians, one of their first candidates was one of the Koch brothers. And their agenda is in some ways, it is the wish list of big corporate America — to get government out of the way. They would like to eliminate all controls on campaign finance. They would like to go to Citizens United on steroids, provided there is a corporate logo that is put on the politicians and policies who are bought. We say it's not enough to put a corporate logo on it. That's the area where we differ. We think we need to get money out of politics so we can get the people back in.

On the possibility of all third parties uniting

Americans have a right to more than three choices. Americans deserve to hear from the whole political spectrum. Particularly when the two major parties are funded by the same predatory banks, fossil fuel giants and war profiteers. And the prison-industrial complex. And they have put an entire generation into debt. My campaign is the one campaign that will cancel that student debt and liberate a generation to move us forward as a society. We think people have a right to hear about this as much as they have a right to hear about the Libertarian vision.

On what would make a success in Philadelphia

I could not conscience sitting this one out and just letting politics as usual continue to throw people, planet and peace under the bus. So for me, success is showing up, building a movement and moving forward as hard and fast and loud as we can. And right now the American public is screaming for exactly that. ...

If we get to 5 percent, it's a whole new ballgame. Then we don't have to spend the whole election just getting on the ballot. We are in ballot fights right now. We have had to put all of our money that we've raised into the ballot access struggles. We could actually begin without a huge handicap and begin to really get the word out in a much bigger way.