Accessibility links
As Democratic National Convention Begins, Not All Bernie Sanders Supporters Support Hillary Clinton Bernie Sanders speaks Monday night at the Democratic convention. What was a sign of party unity has been dampened by the DNC's recent email leak showing leaders tried to undercut his campaign. 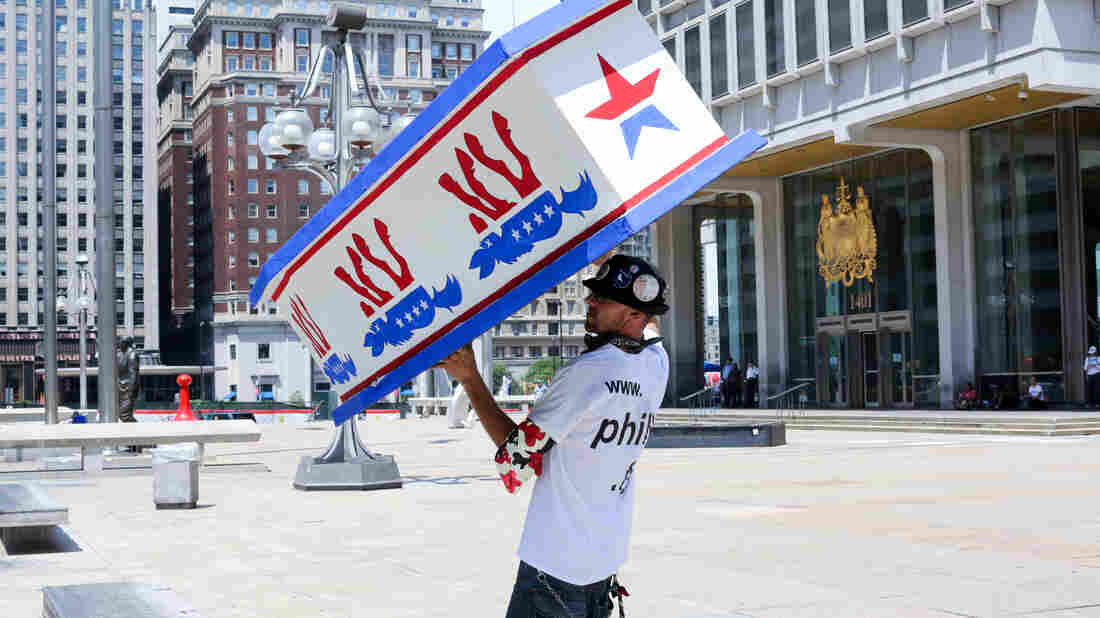 Bernie Sanders supporter and organizer Billy Taylor held a coffin painted with donkeys during a march Sunday in Philadelphia. He told NPR he applied for protest permits to "stop any Hillary supporters from obtaining permits." Meg Kelly/NPR hide caption 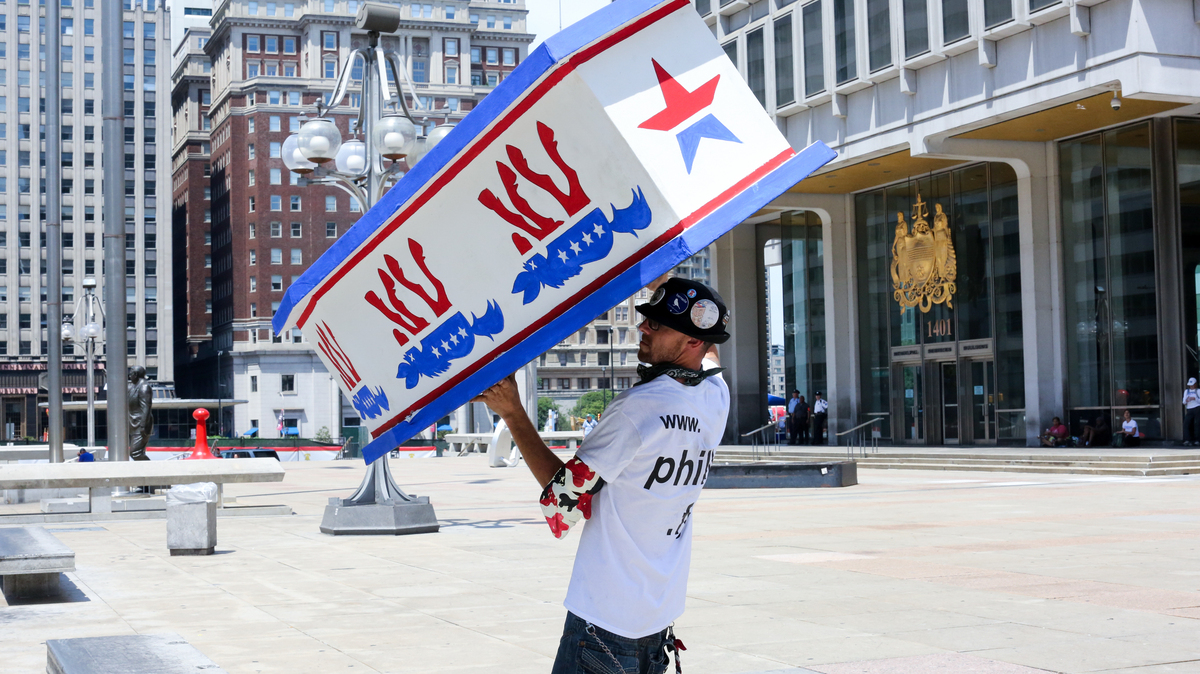 Bernie Sanders supporter and organizer Billy Taylor held a coffin painted with donkeys during a march Sunday in Philadelphia. He told NPR he applied for protest permits to "stop any Hillary supporters from obtaining permits."

If there was ever a time to show party unity, this would be it. This week's Democratic convention is supposed to be about showing a party standing behind its presumptive nominee, Hillary Clinton — and it was headed in that direction by featuring a speech from Bernie Sanders on opening night Monday.

5 Things To Watch In Philadelphia This Week

But it puts a damper on that whole unity feeling now that party Chairman Debbie Wasserman Schultz will resign after the convention — not to mention that her reason for stepping down is that leaked emails showed DNC staffers favoring Clinton during the primaries, and even discussing ways to help her defeat Sanders.

The controversy is an unpleasant distraction for a party launching into a four-day sales pitch to voters (and a response to last week's Republican convention). Just two weeks ago, after Sanders endorsed Clinton, Democrats seemed to be coming together after a bitter, divisive primary season.

But then, Clinton chose Virginia Sen. Tim Kaine as her running mate — many Sanders supporters and other progressives feel he is too moderate to advance their interests.

Now, yet another email scandal has added to Democrats' woes. And it has handed the GOP more ammunition to use after their own convention, which featured a plagiarism scandal and a high-profile snub from Ted Cruz. On Sunday, Donald Trump took to Twitter to gloat over the Democrats' new problems.

The Democrats are in a total meltdown but the biased media will say how great they are doing! E-mails say the rigged system is alive & well!

Bernie Sanders on Sunday cast the email revelations as unsurprising, telling CNN that the emails were "not a great shock."

He added later in a statement: "The party leadership must also always remain impartial in the presidential nominating process, something which did not occur in the 2016 race." 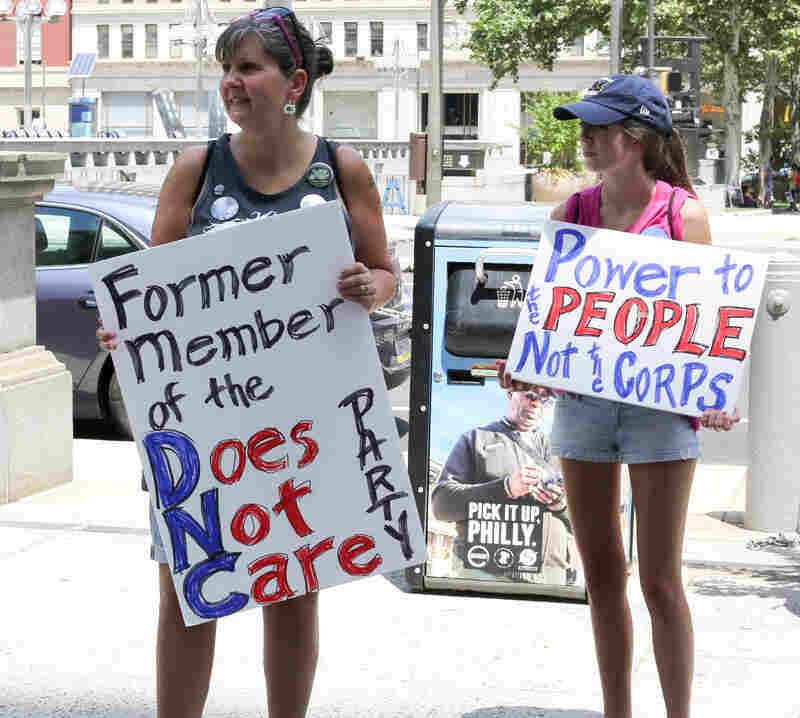 "I knew it already. I knew it," Laura Hockenberry said of news that DNC officials tried to undercut Sanders' campaign. She held a sign reading "former member of the Does Not Care party" during Sunday's march in Philadelphia. Meg Kelly/NPR hide caption

Throughout the campaign, Sanders often painted the DNC as unfairly weighting the scales in favor of Clinton. For example, the party's debate schedule — featuring two on Saturday nights and one during a holiday weekend — created the impression to Sanders (and many others) that the DNC had been trying to boost the well-known Clinton over her lesser-known rivals by keeping the debates few and viewership low.

For his part, Sanders emphasized on Sunday that he will still support Clinton, and he urged his supporters to do the same.

Sanders supporters who rallied in Philadelphia on Sunday weren't there yet. At least a thousand protesters marched ahead of the DNC. Their stalwart support for the Vermont senator, even after he has endorsed Clinton, is a sign that the party still isn't unified as the convention starts. To many, the emails were merely evidence for something they already suspected

"I knew it already. I knew it," said Laura Hockenberry, a Sanders supporter from Grand Rapids, Mich. Hockenberry held a sign proclaiming herself to be a "Former member of the Does Not Care party" (and sported Sanders earrings and a tattoo of a bird, in honor of the bird that landed on his podium during a May speech).

"I was aware that there was all kinds of corrupt rigging and stuff going on from the beginning," she said, mentioning a class-action lawsuit filed against the DNC in June that alleged fraud (among other things) on the part of the party in supporting Clinton over Sanders.

Conventions have lost some of their former importance — they are no longer the nomination contests they once were. But the four-night advertisements are still important, as the New York Times' David Leonhardt argued recently, in the sense that they reach millions of Americans — indeed, they are when many voters first start paying earnest attention to the presidential campaign. And after conventions, he explains, voters' opinions rarely swing much.

Plenty of Sanders supporters do support Clinton now that he has dropped out of the race; a late-June poll from Reuters-Ipsos, for example, found that 40 percent of Sanders supporters said they would vote for Clinton. Another Bloomberg poll found it around 55 percent. Still, that leaves potentially around half of his supporters who told pollsters they couldn't aid Clinton in her campaign against Trump.

"Our belief is that she is not necessarily the lesser of two evils," said Polly Vivirito of Syracuse, N.Y., who attended the protest with her husband. Speaking of Trump and Clinton, she added, "They're both evil. They're both horrible choices."

Vivirito said she would either write Sanders' name in or vote for the Green Party's Jill Stein — and she's not the only Sanders supporter considering those options for November. As for Sanders' Clinton endorsement, some Sanders supporters have mixed feelings.

Hockenberry said she feels "not good" about Sanders' choice to back Clinton, but she doesn't blame him.

"I feel like he's been pushed into a political corner," she said. "He hasn't been able to navigate in any other reasonable way."