Sanders Closes A Night Of Disunity By Encouraging Support For Clinton

Sanders Closes A Night Of Disunity By Encouraging Support For Clinton 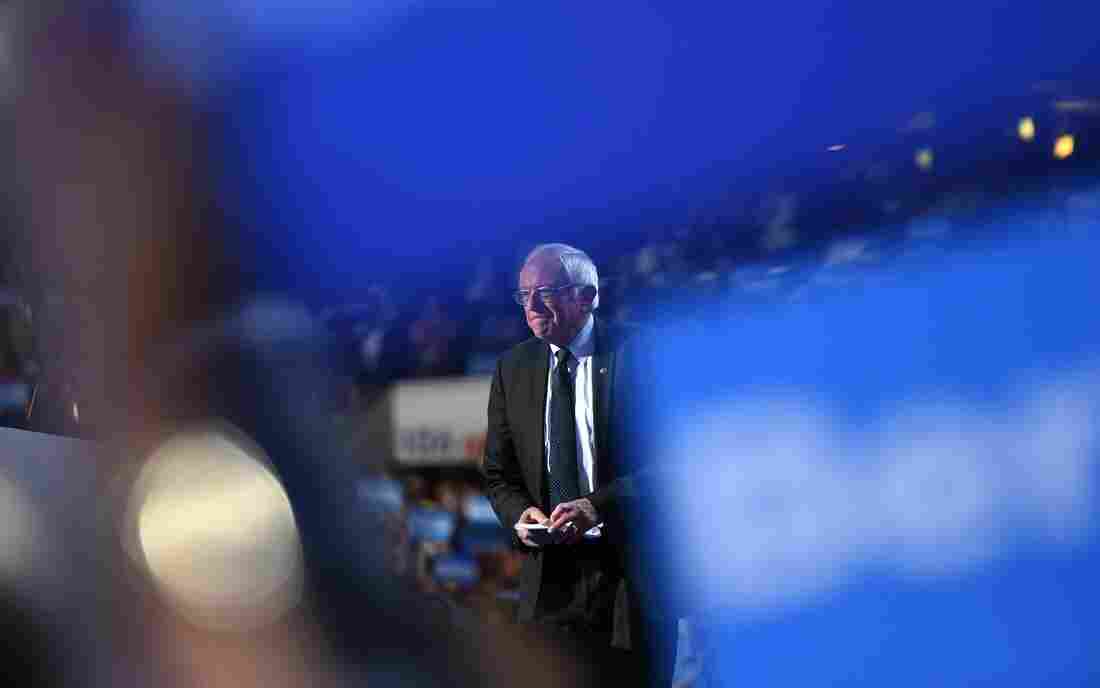 Sen. Bernie Sanders takes the stage on the first evening of the Democratic National Convention in Philadelphia on Monday. Timothy A. Clary/AFP/Getty Images hide caption 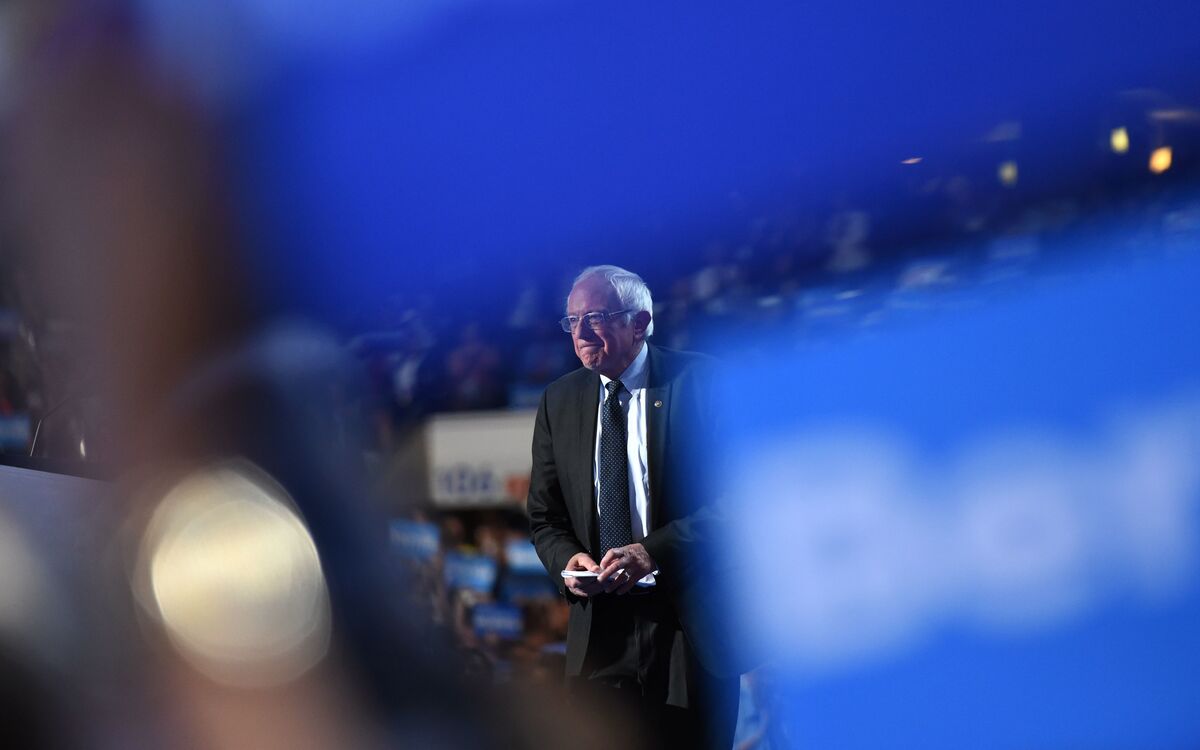 Sen. Bernie Sanders takes the stage on the first evening of the Democratic National Convention in Philadelphia on Monday.

The first night of the Democratic National Convention in Philadelphia was marked by acrimony despite constant calls for unity by party leaders.

Still reeling from the revelations of an email leak, supporters of Sen. Bernie Sanders disrupted the proceedings throughout the night with boos and jeers. A night that was supposed to mark the beginning of a party coalescing behind its presidential nominee was instead punctuated by acts of division.

The opening invocation was interrupted with chants of "Bernie! Bernie!" Rep. Elijah Cummings was interrupted by chants against the Trans-Pacific Partnership. Some in the crowd shushed Sanders supporters when they began chanting during first lady Michelle Obama's speech.

It was no surprise, then, that the night belonged to Sanders, who came onstage at the end to rapturous applause.

"By these measures, any objective observer will conclude that — based on her ideas and her leadership — Hillary Clinton must become the next president of the United States. The choice is not even close," Sanders said.

In the crowd, Sanders supporters booed, and some shed tears. But after a night of division, the cheers won out.

First lady Michelle Obama spoke right before Sanders. She extolled the virtues of the United States, and without naming him, she made the case against GOP nominee Donald Trump. 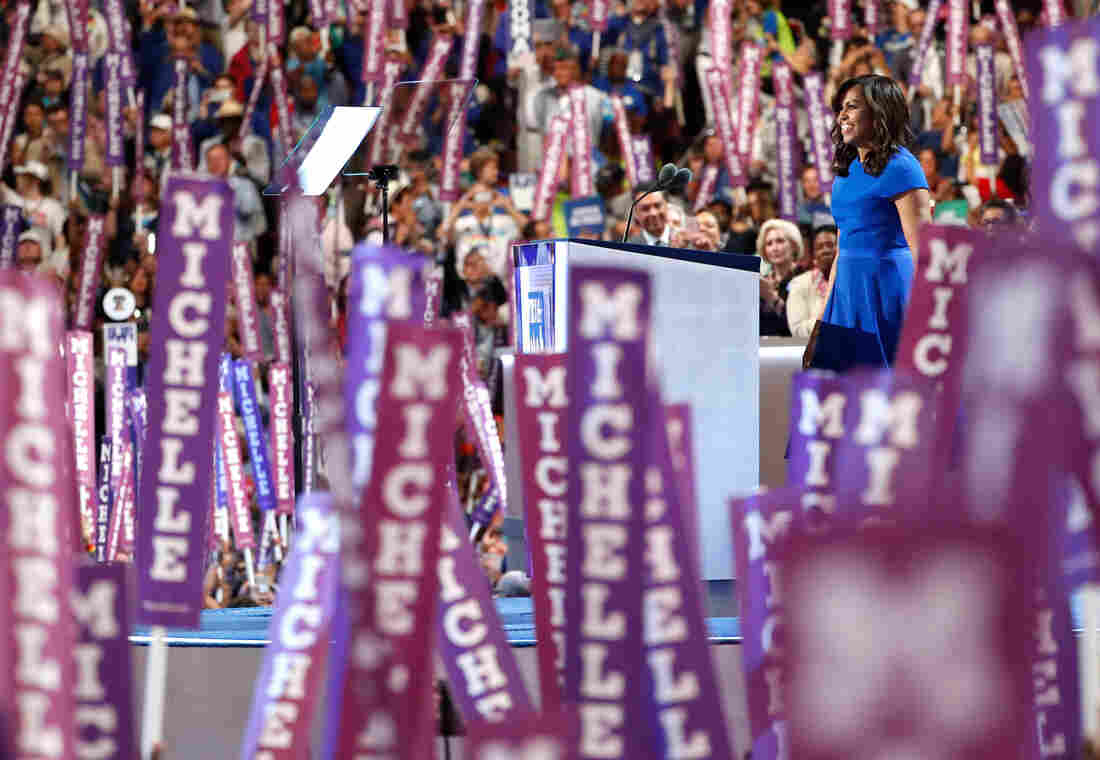 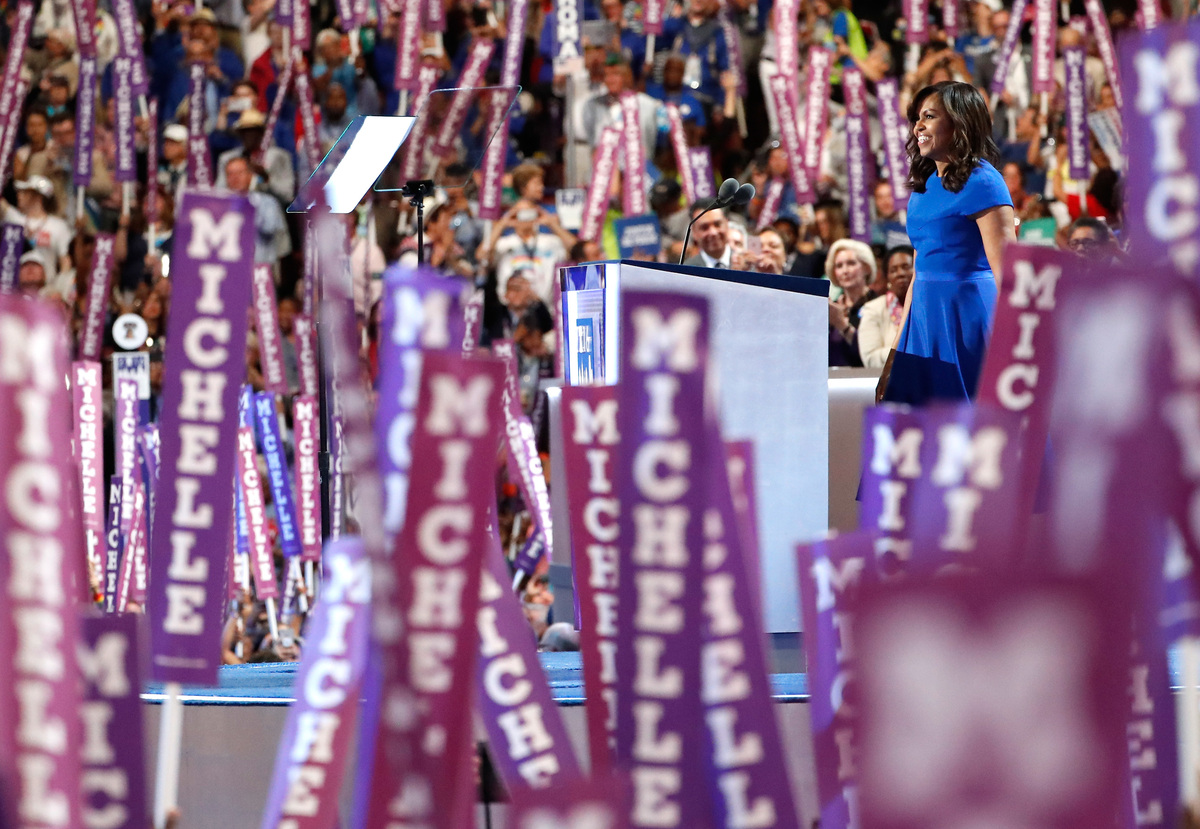 And then she declared that she was "with her."

Obama seemed to acknowledge them, saying that when Hillary Clinton lost against her husband in 2008, she didn't get "angry or disillusioned."

"Hillary did not pack up and go home, because as a true public servant, Hillary knows this is so much bigger than her own desires and disappointments."

Why Would Vladimir Putin Want To Leak The DNC Emails?

But Obama managed to unify the arena by taking on big themes, by portraying the United States as a country that strives to better itself, as country still on the ascent.

"That is the story of this country, the story that has brought me to this stage tonight," Obama said. "The story of generations of people who felt the lash of bondage, the shame of servitude, the sting of segregation but who kept on striving and hoping and doing what needed to be done so that today, I wake up every morning in a house that was built by slaves — and I watch my daughters — two beautiful, intelligent, black young women — playing with their dogs on the White House lawn. And because of Hillary Clinton, my daughters — and all of our sons and daughters — can take for granted that a woman can be president of the United States."

The prime-time portion of the convention began with comedian Sarah Silverman, who came onstage with Sen. Al Franken of Minnesota in an attempt to unify the crowd. It backfired.

They are a Clinton supporter (Franken) and a Sanders supporter (Silverman), who were there to tell the crowd a tale of how they overcame their differences.

Silverman made it clear that she was a Sanders supporter from the beginning, but now it was time to get behind Clinton.

"She's like the only person ever to be overqualified for being president," Silverman said. Plus, Sanders had gotten Democrats to embrace progressive ideas like universal health care and college education. 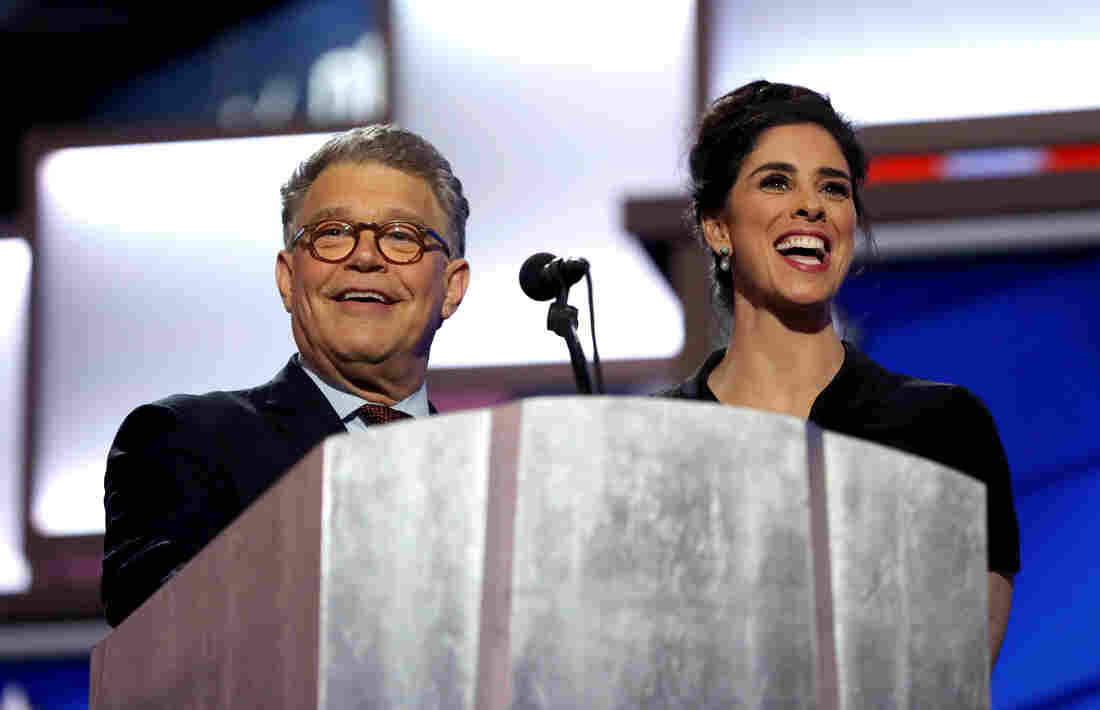 Silverman finally said: "I will vote for Hillary with gusto, as I continue to be inspired and moved to action by the ideals set forth by Bernie."

Sanders' supporters were still reeling from emails published by WikiLeaks earlier this week that appear to show Democratic officials had favored Clinton over Sanders during the primaries.

So they continued to loudly boo and chant "Bernie, Bernie!" as Silverman continued her speech.

Silverman finished and stood next to a stunned Franken.

"Can I just say?" Silverman said. "To the 'Bernie or Bust' people, you're being ridiculous."

Moments later, it was clear that despite all the vocal political differences present in the arena, attendees were able to unite over one thing — folk singer Paul Simon. The mood changed as if a switch had been flipped as Simon sang "Bridge Over Troubled Water" to a thrilled crowd.

Some of that unity dissipated quickly, but the crowd mostly continued to cheer as one as New Jersey Sen. Cory Booker spoke about big themes like empowerment and patriotism, hitting Trump, calling him a "bully."

"In times of crises, we don't abandon our values. We double down on them," he said. 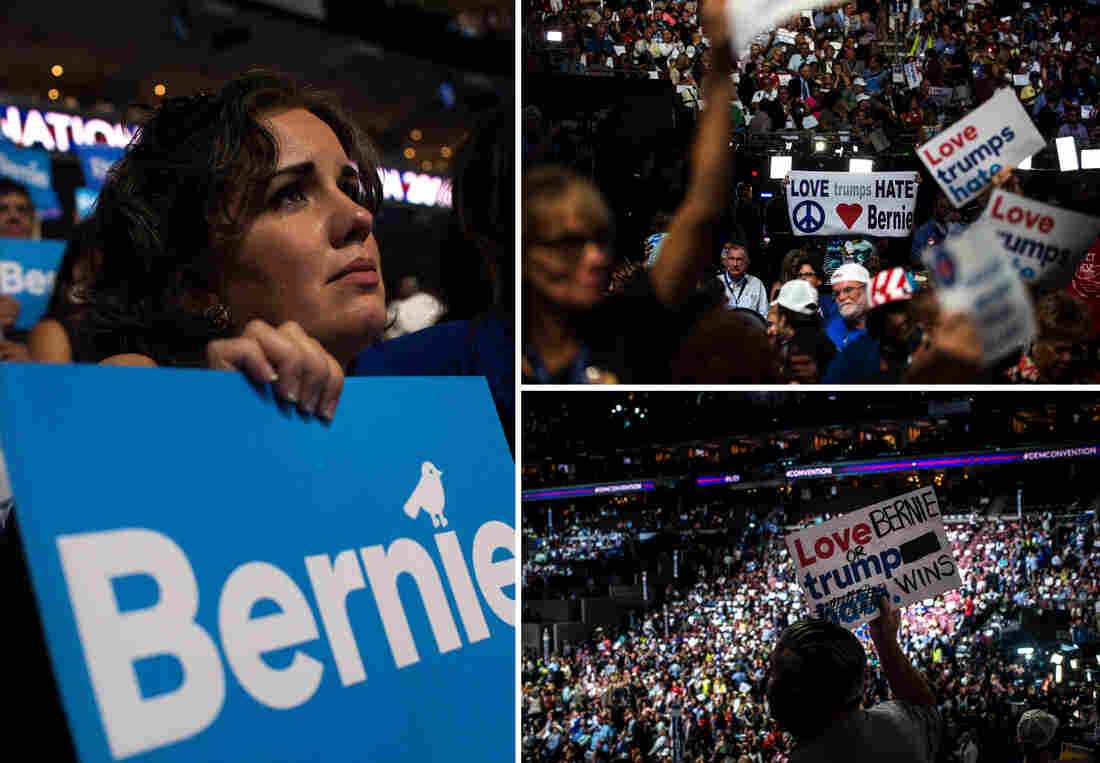 The crowd first erupted into chaos Monday shortly after the proceedings began amid controversy over leaked emails from the Democratic Party's organizing committee.

Baltimore Mayor Stephanie Rawlings-Blake, who took over for Rep. Debbie Wasserman Schultz after she announced her forthcoming resignation over the email scandal, gaveled the proceedings into order without any incident. But that was not to last.

When the Rev. Cynthia Hale mentioned Hillary Clinton for the first time during the invocation, the floor erupted into boos.

Clinton supporters began chanting "Hil-la-ry, Hil-la-ry," but they were quickly drowned out by chants of "Bernie, Bernie!"

NPR's Tamara Keith reports that Sanders' delegates received a plea from the candidate earlier today to keep protests off the floor. 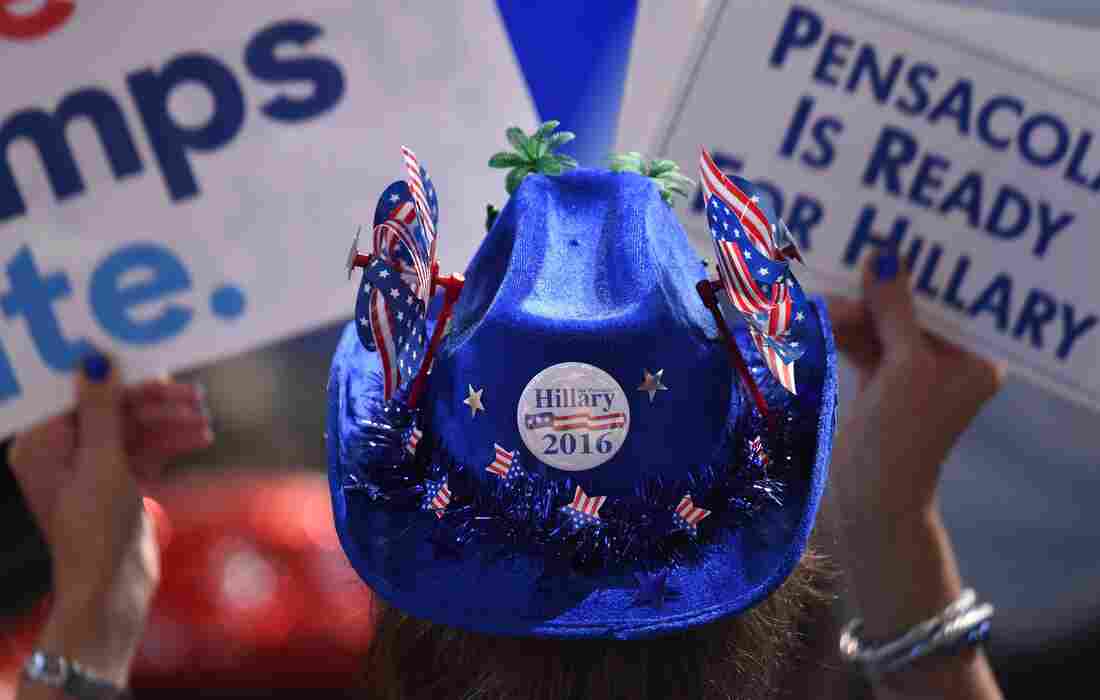 "It's of utmost importance you explain this to your delegations," the text read.

A Democratic Party official tells Tamara that the Sanders and Clinton campaigns have tried to work together to present a united front. As the night wore on, it was clear those talks and the message from Sanders had not swayed the delegations.

The day began as Rep. Marcia Fudge, from Ohio, was shouted down many times as she tried to get through some procedural motions.

As Cummings talked about how proud his late father would be of the people in the room, Sanders supporters shouted "No TPP, No TPP," in reference to the Trans-Pacific Partnership agreement. 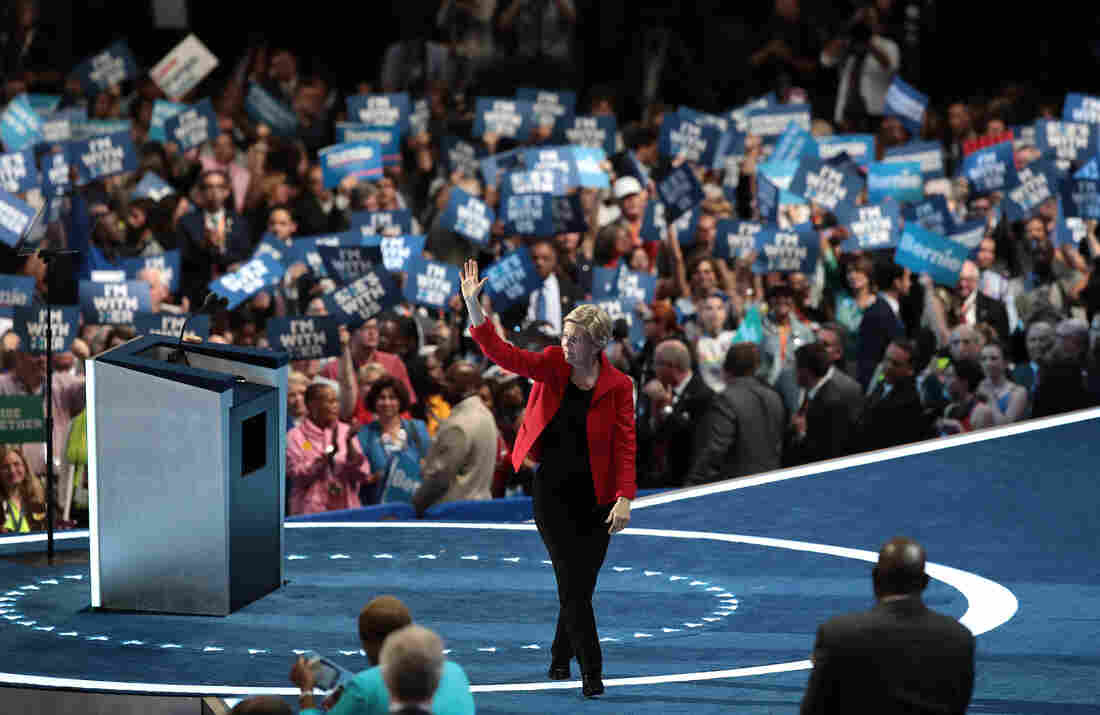 Sen. Elizabeth Warren leaves the stage after giving her remarks. "We are not going to be Donald Trump's hate-filled America," she said. Drew Angerer/Getty Images hide caption

Sanders delegate Diane Russell, a state representative from Maine, spoke directly to the supporters of the Vermont senator.

She talked up the Unity Reform Commission, which was set up, she said, to "build a fairer process going forward." And she called for Sanders supporters to get in line with Clinton.

"I want to be clear, we did not win this by selling out. We won this by standing together," Russell said.

Wasserman Schultz had announced earlier in the day that she would not gavel open the convention. And a bit after the proceedings began, the Democratic National Committee issued a formal apology to Sanders.

"The DNC does not — and will not — tolerate disrespectful language exhibited toward our candidates," the apology read. "Individual staffers have also rightfully apologized for their comments, and the DNC is taking appropriate action to ensure it never happens again."