Accessibility links
After His Assassination, A Pakistani Artist's Family Keeps His Song Alive The famed qawwali singer Amjad Sabri was shot down last month in Karachi, Pakistan, apparently by the Taliban. The vocalist's family is pledging to keep his home a refuge of, and for, music. 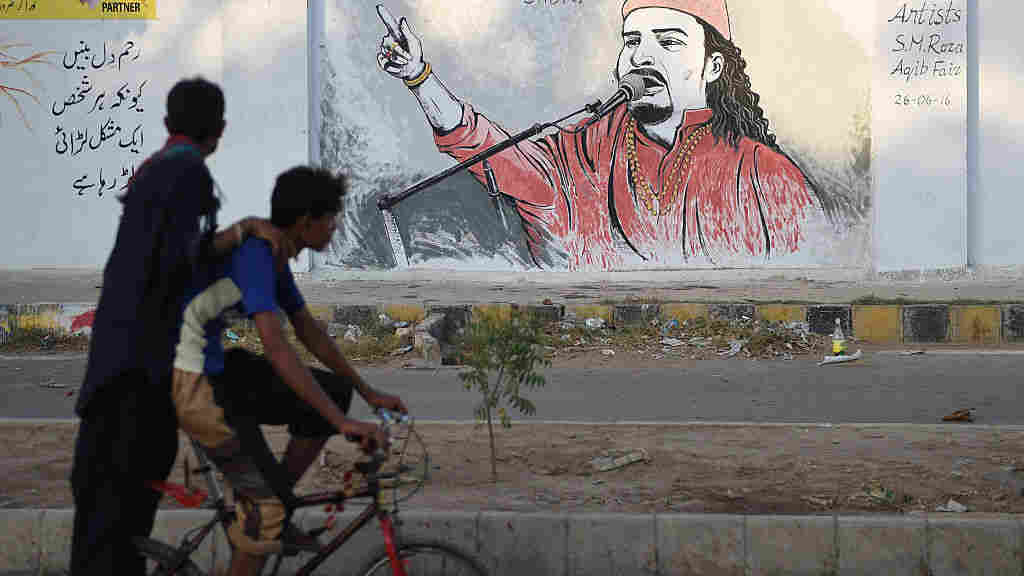 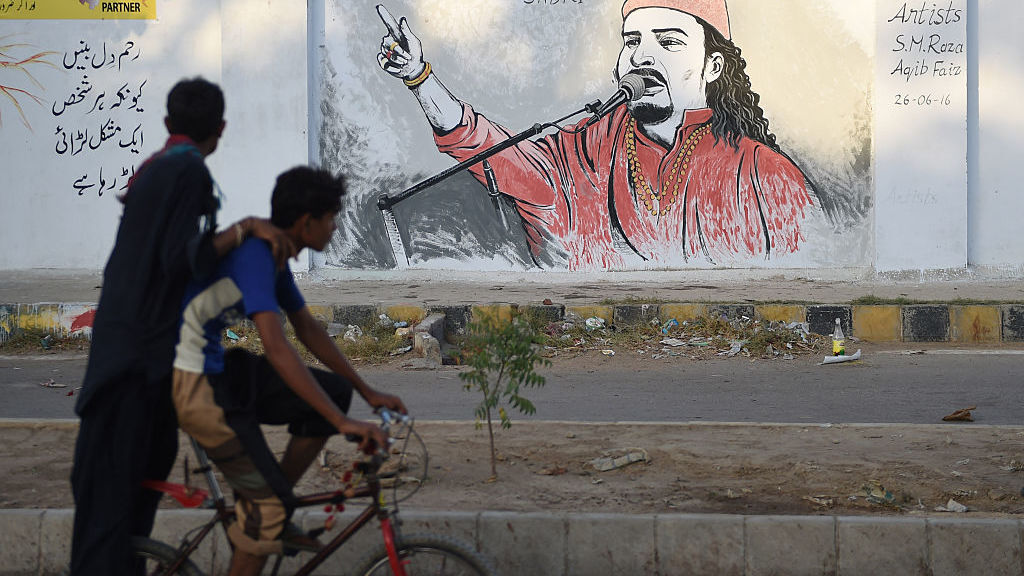 Pakistani cyclists ride past a wall image of late Sufi musician Amjad Sabri alongside a street in Karachi on June 27, 2016.

It's been about a month since Amjad Sabri's voice was silenced. He was shot dead in his home city of Karachi by two men on a motorcycle, and his millions of fans are still in shock and anger.

So are his family. Sabri's oldest brother, Sarwat, hopes the police will soon arrest the culprits. He has many questions for his brother's killer: "Why did you do it? Are you doing it for God? For evil? Or for a man? For money? And he has to give the answer to the whole nation — not only the nation, the whole world now, because the whole world is listening."

Why Was A Prominent Muslim Musician Gunned Down In Pakistan?

Qawwali is what made Amjad Sabri world-famous. It's devotional music linked with Sufism, a mystical variant of Islam deeply entwined with the traditions of South Asia.

Sabri was a brilliant performer and a pioneer. At his family home in the back streets of Karachi, visitors still flood in every day to pay their condolences. An entire wall is devoted to a portrait of Amjad's father, also a legendary qawwali singer.

We're met by Amjad's brothers, including Talha Fareed, who performed alongside Amjad for many years.

"He was like my father," Talha says. "I am still in shock. I feel as if he is coming in here. I feel he is just coming."

Relatives have come from far and wide. "We are proud that we were related to him," says Mohammad Taha, 15, who flew in from his home in London to mourn his Uncle Amjad. "We are proud to be his family. The thing I don't get is, who would want to hate him? He loved the world, the world loved him. But there is always a hater. Where there's friends, there's always enemies as well."

Those enemies include the Taliban. For years now, the Taliban and other Islamist fundamentalists have fought a war against music. In Pakistan, they've burned down CD shops and attacked musicians. Soon after Sabri was shot, a splinter group of the Pakistani Taliban took responsibility. Sabri's family aren't sure that's true, yet there's no doubt their form of Sufi Islam, with its emphasis on spreading faith through music, is anathema to hardline Islamists like the Taliban.

Then, as we're sitting and talking, something strange happens. The Sabri family starts singing. We didn't ask them to; it was spontaneous. Amjad's brother, Azmat, starts; his younger brother Talha Fareed joins him for a duet; and then it's Amjad's uncle Mehmood's turn.

There is a message behind this. Amjad's home is a house of mourning right now, but it will always be a house of music that will not be silenced by violence. The next generation of Sabris also don't seem scared.

Amjad's sons and nephews are busy learning qawwali, according to Sarwat. "How many of them are learning to sing? All of them!," he says. "And all of them are very talented!"

Twelve year-old Bilawal Sabri, singing one of his Uncle Amjad's songs, is happy to prove that point.