Accessibility links
Bill Clinton At Democratic Convention: Hillary Clinton Is The 'Best Darn Change-Maker' He Has Met The former president painted a portrait of Hillary Clinton as a fighter who works relentlessly to make the world better.

If the first day of the Democratic National Convention focused on Bernie Sanders, the second day focused solely on Hillary Clinton.

The delegates made history early, nominating Clinton to be their candidate for the presidency — making her the first woman to top a major-party ticket in the United States.

Throughout the night speakers endorsed Clinton for being a fighter. They said she fought for New York after Sept. 11, for universal health care, for civil rights and for the little guy.

In the headline speech, former President Bill Clinton made the case for the woman he called the best "darn change-maker" he has ever met.

Hillary Clinton's husband spoke about his wife's life journey — from the young woman with "thick blond hair and big glasses" he met in law school to her experiences as a mother and a senator and as secretary of state.

Sometimes Bill Clinton got personal: He detailed how Hillary left him speechless and how he proposed two times before she said yes the third.

But most of his speech was focused on Clinton's accomplishments as a public servant.

Bill Clinton painted a portrait of Hillary Clinton as a fighter who works relentlessly to make the world better.

"You could drop her in any trouble spot, pick one, come back in a month and somehow ... she will have made it better," Clinton said. "That is just who she is."

Clinton closed by contrasting the woman he knows — the "real" Hillary Clinton — with the cartoon character he accused the Republicans of running against her. 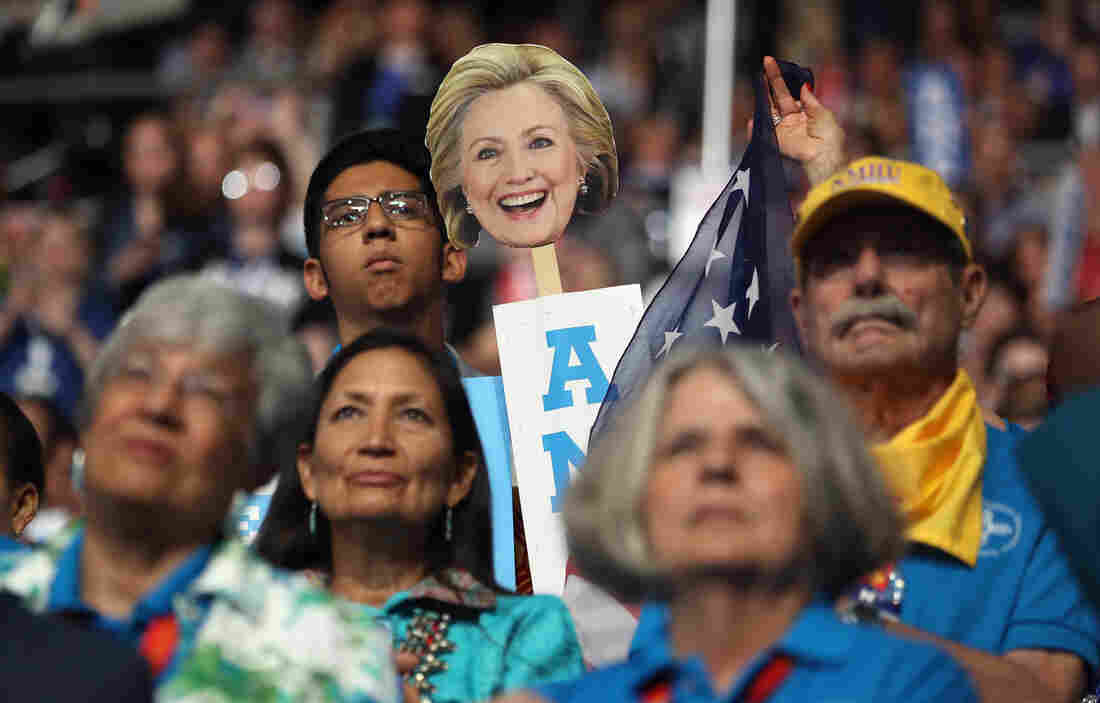 The night did include echoes of the discontent that plagued the first night of the convention. After Clinton was officially nominated, some Sanders supporters staged a walkout and a silent sit-in to protest what they say is a rigged system.

But the proceedings continued and Hillary Clinton made an appearance on the big screen at the end of the night.

"I can't believe we just put the biggest crack in that glass ceiling tonight," Hillary Clinton said. And then she turned her attention to any little girls who had stayed up to watch.

"I may become the first woman president but one of you is next," she said.

We touched on the historic nature of tonight in a separate post. And we live-blogged the prime-time speakers. So if you want a blow-by-blow, keep scrolling.

The night ended with a dramatic nod to history being made Tuesday night in Philadelphia. Singer-songwriter Alicia Keys played "Superwoman" as photographs of all previous 44 presidents were shown on-screen.

After President Obama was shown, Hillary Clinton appeared via a live feed from New York. 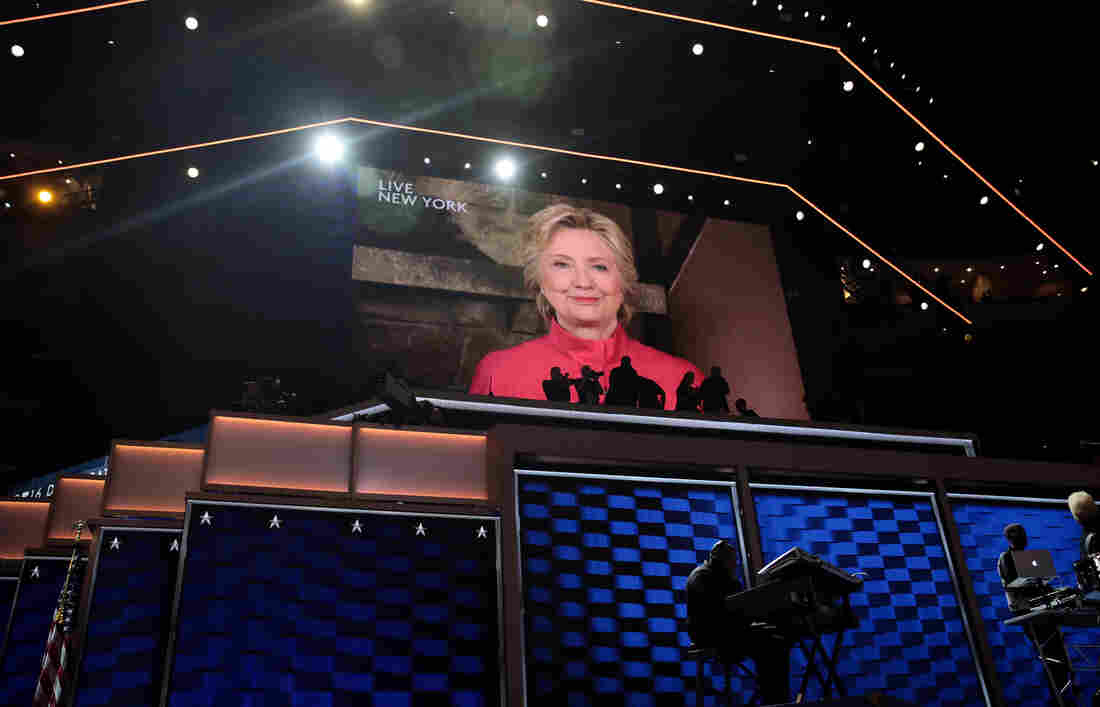 At the end of the night, Hillary Clinton addresses the convention via live feed from New York. Drew Angerer/Getty Images hide caption 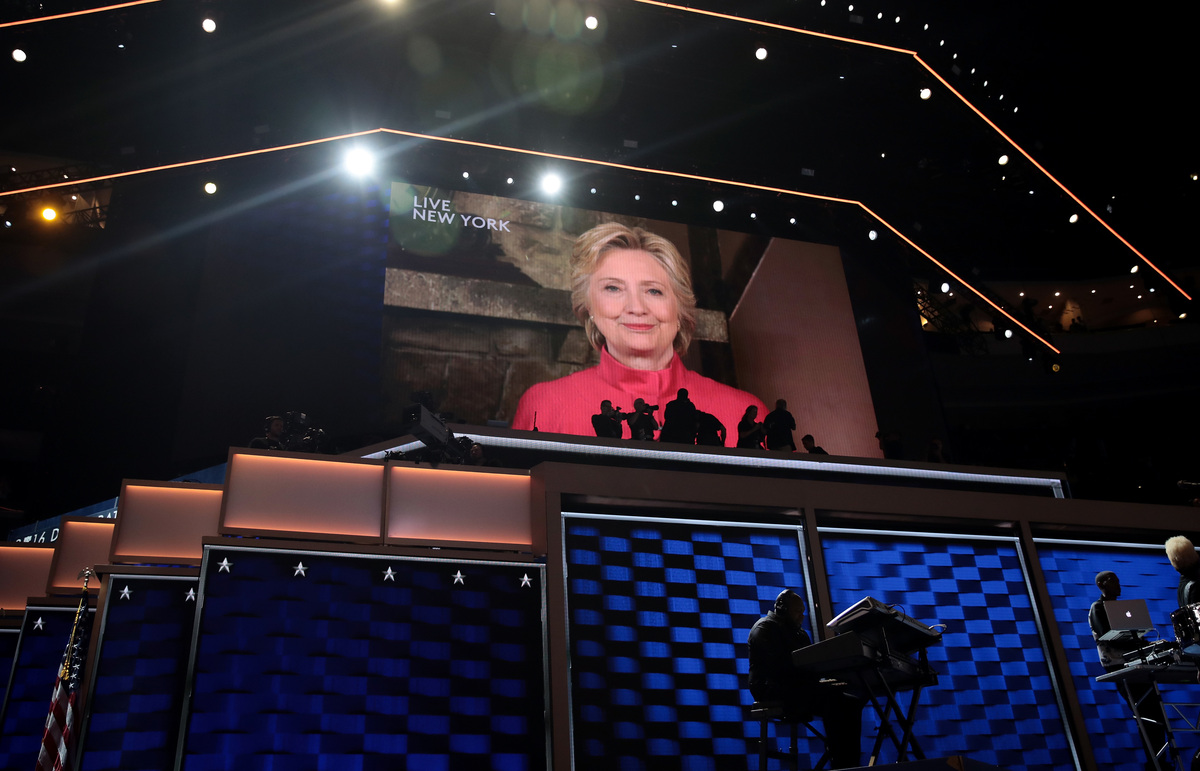 At the end of the night, Hillary Clinton addresses the convention via live feed from New York.

"I can't believe we just put the biggest crack in that glass ceiling tonight," Clinton said. And then she turned her attention to any little girls who had stayed up to watch.

"I may become the first woman president but one of you is next," she said.

Clinton spoke about his wife's journey — from a young woman with "thick blond hair and big glasses" he met in law school to her experiences as a mother and a senator and a secretary of state.

Sometimes he got personal: He detailed how she left him speechless and how he proposed two times before she said yes the third. But most of the speech was based on Clinton's accomplishments as a public servant.

Bill Clinton painted a portrait of Hillary Clinton as a fighter who works relentlessly to make the world better.

Hillary Clinton's husband, former President Bill Clinton, opened his speech with this line: "In the spring of 1971, I met a girl." 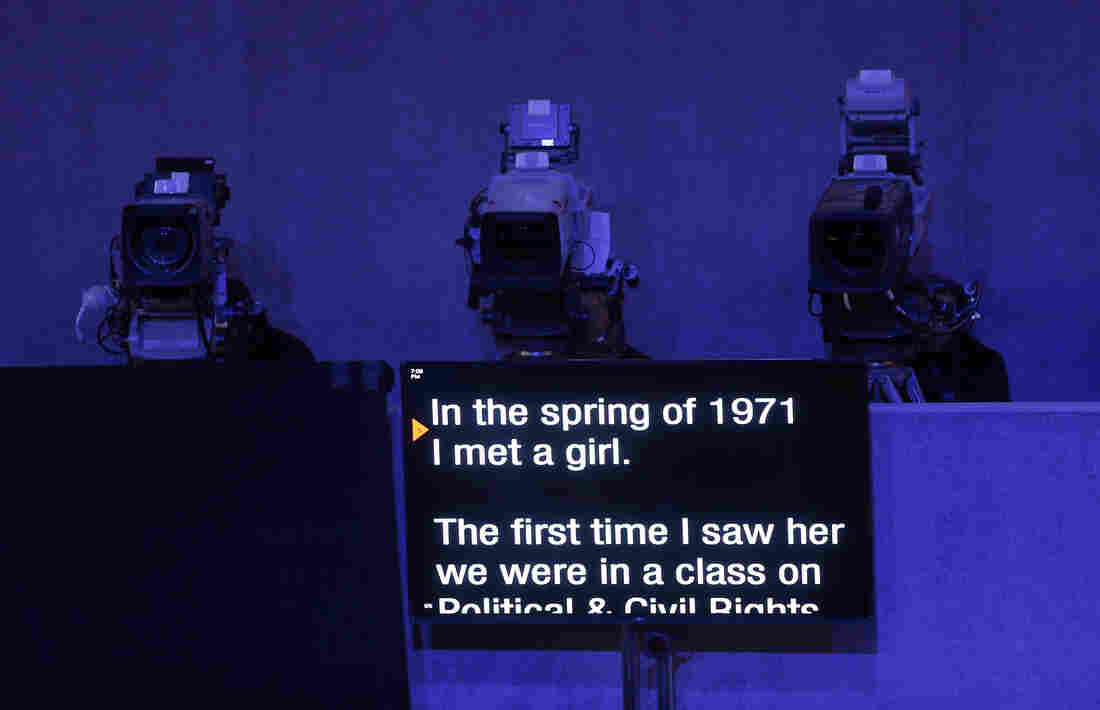 The former president then launched into a story of how he met Hillary Clinton, how he wooed her and asked her to marry him.

Former Secretary of State Madeleine Albright really wrapped up what has been the theme of the night: Hillary Clinton is a fighter. She has fought for New York after Sept. 11, speakers said, for universal health care, for civil rights and for the little guy.

Albright said that when she first came to the United States, Harry Truman was her first American president.

Howard Dean, the former governor of Vermont, delivered a very formal speech in which he detailed the policy differences between Clinton and Trump

"Donald Trump will take us back to a time when insurance companies can deny you coverage if you have a pre-existing condition, or he will take you back to a time where insurance can charge you more just because you were a woman," he said. "And what is he going to replace this with? Quote — 'Something so much better. Yuge,' no doubt. That's it. That's the whole plan right there. Six-word plan for health care."

Dean said that Clinton would "finish the job" on health care.

But Dean finally got the crowd excited when he did what he is known for: He screamed.

"This race is going to be won on the ground: in Colorado, and Iowa, and North Carolina, and Michigan, and Florida, and Ohio, and Pennsylvania," he screamed. "And then we're going to the White House."

We're catching up a bit with a speech delivered by former Attorney General Eric Holder, who made the case for a president who can deal with complicated problems with nuance.

"At a time when the bonds between law enforcement and communities of color have frayed — when assassins target police in heinous attacks, and peaceful citizens have to question whether black lives truly matter, and they do, we need a president who understands the reality that I saw in my travels across our country as our nation's 82nd attorney general," Holder said. 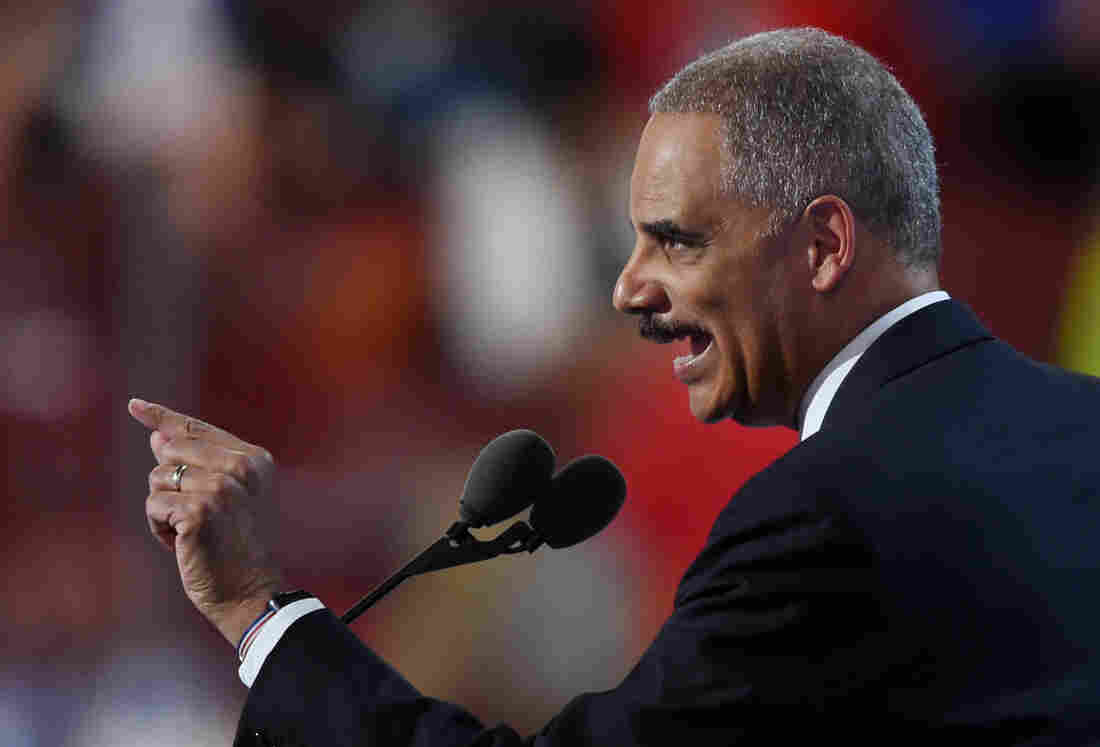 Hillary Clinton, Holder said, will be the candidate who can end the mass incarceration of black men and who will take on what he called "systemic racism."

"This election is about much more than politics," Holder said. "It's about the arc we are on, as a nation; the composition of our character, as a people; and the ideals — of equality, opportunity and justice — that have always made America great."

Cecile Richards, president of Planned Parenthood, took on Donald Trump by saying that women would be his undoing come November.

"We're going to be the reason you're not elected," Richards said.

And Richards conjured up the women who came before her.

Her great-grandmother grew up at time when women could not vote. But she saw her daughter, the late Ann Richards, be elected Texas governor.

"Tonight, we are closer than ever to putting a woman in the White House," she said. "And I can almost hear Mom saying, 'Well, it sure took y'all long enough.' "

With a darkened arena and to a standing ovation, nine mothers whose children died in high-profile incidents, many involving police officers, came onstage.

They all wore red flowers on their lapels and stood in a semicircle. 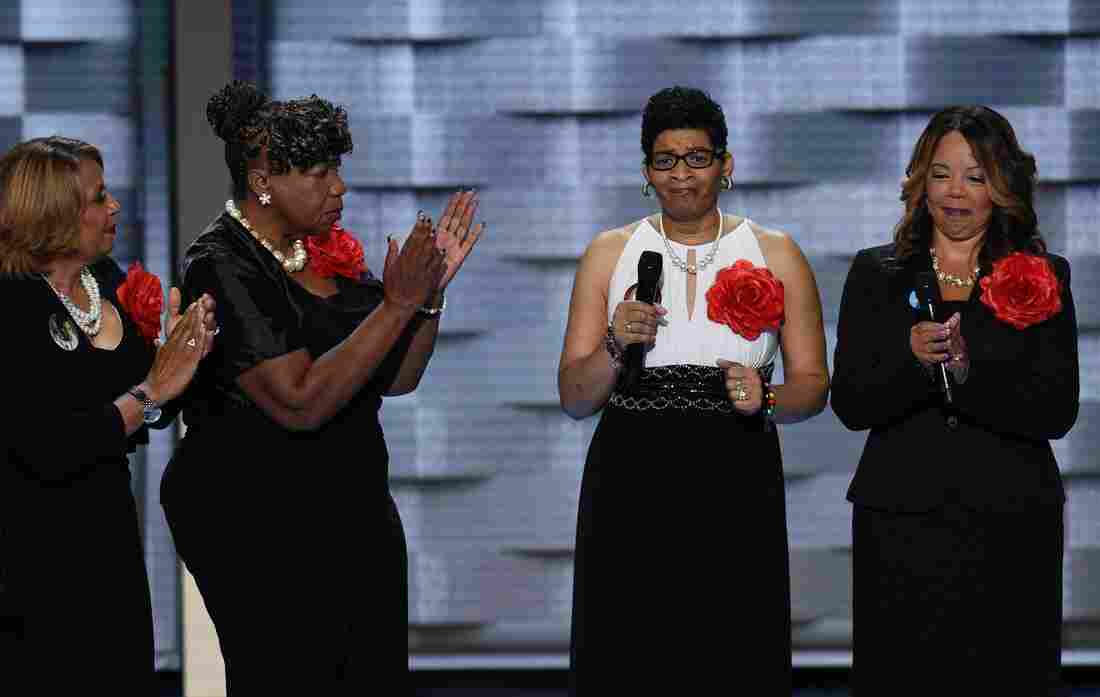 Geneva Reed-Veal (second from right) speaks about her support for Hillary Clinton and about her daughter, Sandra Bland, who was found dead in her jail cell last summer. Saul Loeb/AFP/Getty Images hide caption

"I am here with Hillary Clinton because she is a leader and a mother who will say our children's name," Geneva Reed-Veal, the mother of Sandra Bland, said.

"She isn't afraid to sit at a table with grieving mothers and bear the full force of our anguish. She doesn't build walls around her heart," McBath said.

"This isn't about being politically correct," Sybrina Fulton, Trayvon Martin's mother, said in reference to Donald Trump. "This is about saving our children."

In a tone that is markedly different from the law-and-order one set at the Republican National Convention, Pittsburgh Chief of Police Cameron McLay made a case for dialogue.

He referenced both the killings of police and the killing of black men by police officers.

"We can support our police officers while at the same time making criminal justice reforms," he said. "We can do both and we will do both."

Actress Elizabeth Banks provided the light moment of the evening, when she walked onstage the same way that Donald Trump did at the Republican National Convention in Cleveland — backlit and to the sound of Queen's "We Are the Champions".

Much like first lady Michelle Obama did yesterday, Donna Brazile, the incoming interim chair of the Democratic National Committee, put this election and Clinton into historical context.

"My friends, as a child, I sat in the back of the bus; I was told, time and time again, that God's potential did not exist in people like me," she said. "I've spent my life fighting to change that. And from the first day when I met Hillary Clinton, I've known that she's someone who cares just as much and will fight just as hard for children."

Scene from the media tent outside of the arena, where Bernie supporters have gathered post walkout #DNCinPHL: pic.twitter.com/KdrUYfprKc

NPR's Sam Sanders followed some of the Bernie Sanders supporters out of the arena and into the media tent where they staged a silent sit-in.

"I think this is a great opportunity for us to show solidarity, No. 1," said Melissa Michelson, a delegate from Los Angeles. "And No. 2, to get the message out that we still have a lot of work to do in this country and the political revolution is not over."