Accessibility links
Visitors To A Shrinking Alaskan Glacier Get A Lesson On Climate Change On a busy day, thousands of tourists visit the Mendenhall Glacier in Juneau. The U.S. Forest Service wants those people to take in the dramatic views but also consider why the glacier is receding. 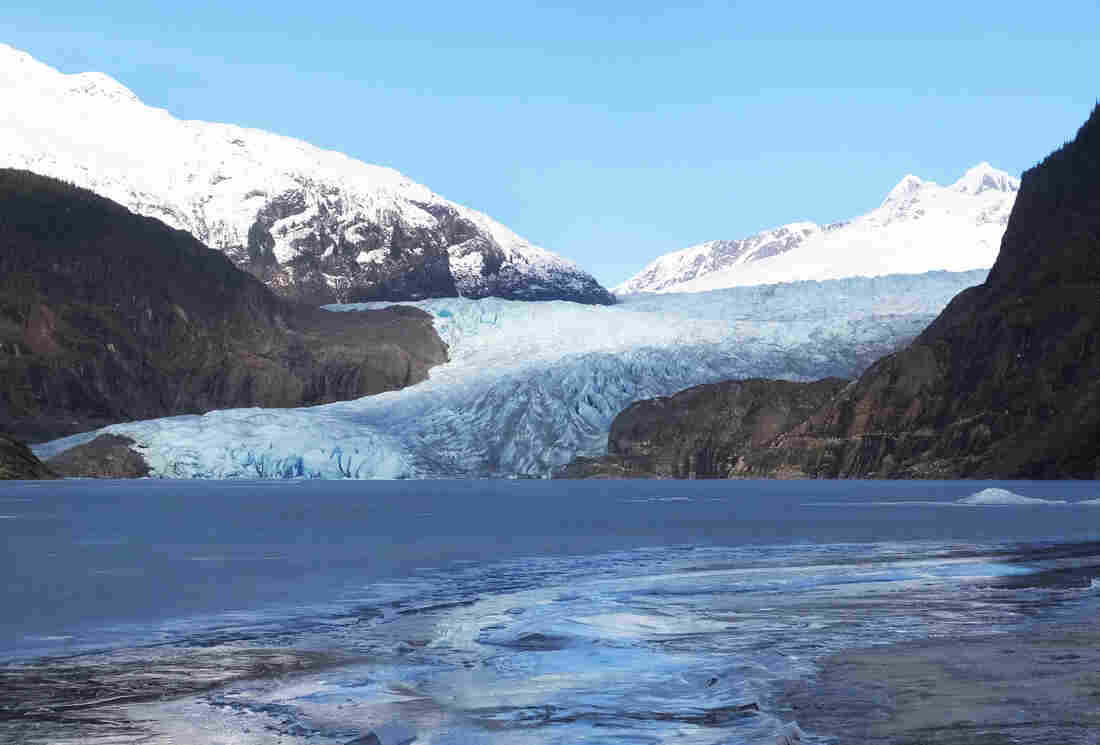 Light shines on the mountains behind the Mendenhall Glacier in Juneau, Alaska. Guides are using the glacier's rapid retreat as a stark lesson on the effects of climate change. Becky Bohrer/AP hide caption 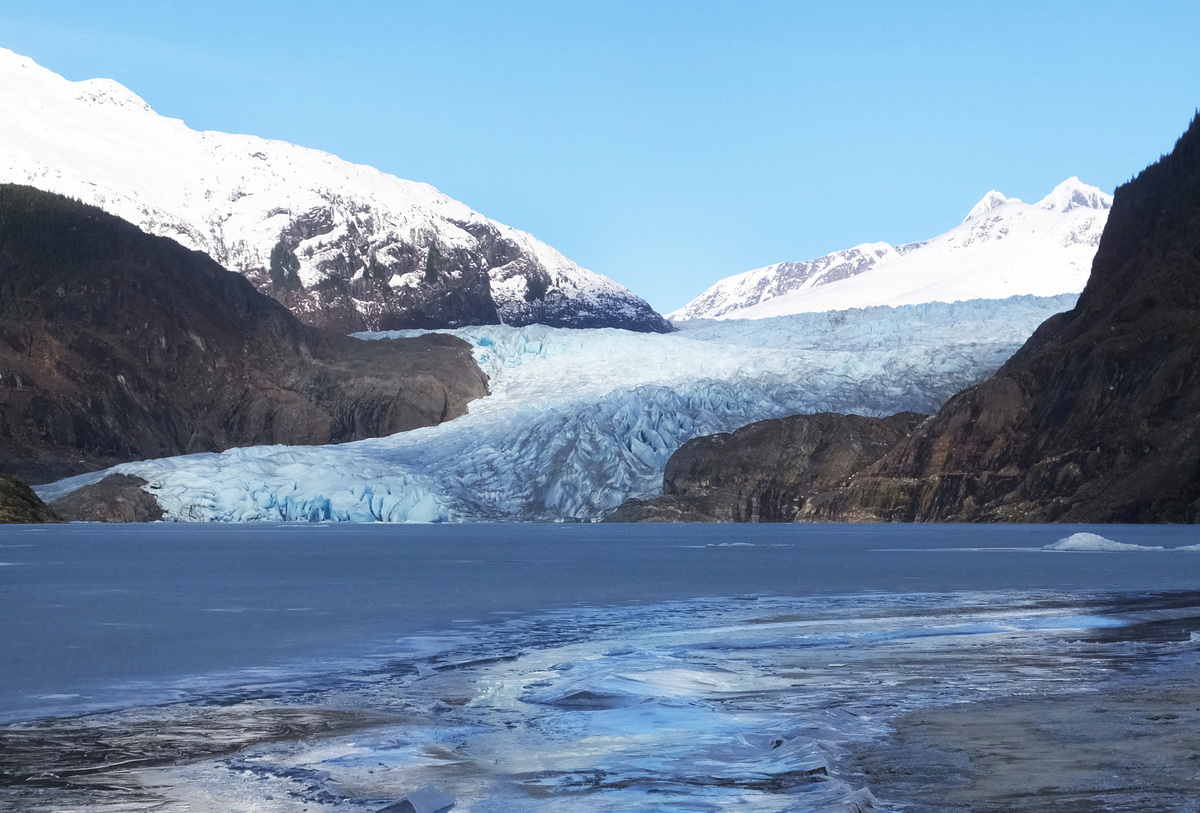 Light shines on the mountains behind the Mendenhall Glacier in Juneau, Alaska. Guides are using the glacier's rapid retreat as a stark lesson on the effects of climate change.

The Mendenhall Glacier is visible from the visitor center parking lot. But it's still pretty far and if you traveled all the way to Juneau, Alaska, you probably want to get up close to the blue tinted ice.

Touching the face of the glacier can be tricky. You're separated by cold, silty water, and a hike over the ridge could take hours.

Visitor center staff know that. And inside, they use it to prove a point.

Stand At The Edge Of Geologic Time

John Neary, director of the glacier's visitor center, wants the more than 500,000 people who visit the Mendenhall Glacier each year to know that it's rapidly retreating due to climate change.

The 18 staffers who work for him are prepared to talk about it. Tod Kahn, a Forest Service employee, lures a crowd over to touch a slick hunk of glacial ice.

"Have you had a chance to shake hands with the Mendenhall Glacier yet?" Kahn asks them.

She pulls out a stack of photos.

"Would you like to see some photos of the glacier in the past?" she asks.

The photos start in the 1950s and show the progression of how much the glacier has changed.

"You can't replace it, right?" asks Wilmer Balatbat, a tourist. Kahn says no. Balatbat asks how to stop it — exactly the kind of reaction the Forest Service wants.

The Sacred Glacier Is Melting But The Festival Goes On

Oregon's Mile Of Glacier Caves: A Hidden, And Disappearing, World

"We didn't know it's deteriorating that fast," Balatbat says. "We believe it's for everybody to see. For generations and generations."

Initially, Neary says, not everyone was game for the new programming.

"There was resistance and I think it's because people view it as a negative thing," Neary says. "And you know, people on vacation, they don't want to hear about negative things. They want to think about positive, really exciting — watch the whales, see the eagles, that sort of thing."

But he says it's all connected. For instance, nutrients from the glacier feed plankton in the ocean. Those plankton feed the whales.

Over the past 30 years, Neary has noticed an extreme visible change in the glacier. But Forest Service staff say — at least once a day — they get someone who disagrees with the climate change spiel, like Joe and Sarah DeRosier, a Minnesota couple in their 20s. 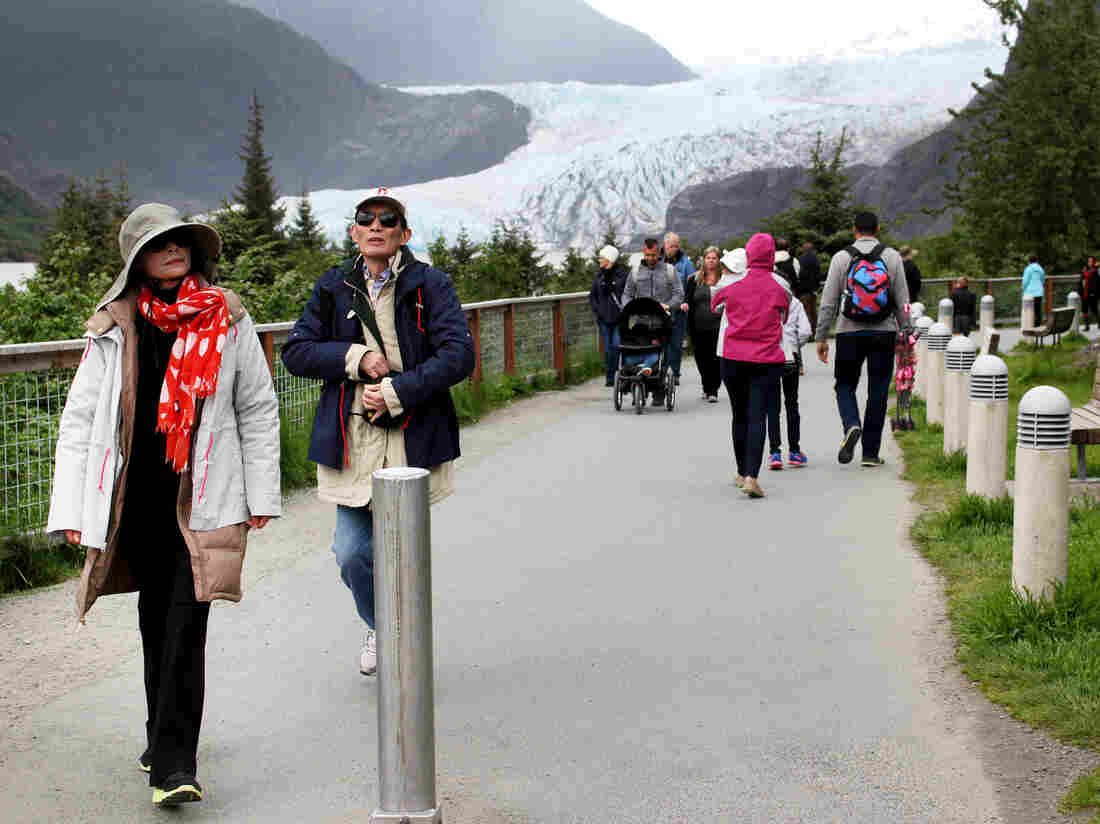 About 80 percent of the people who come to the Mendenhall Glacier in the summer are tourists. Elizabeth Jenkins/KTOO hide caption 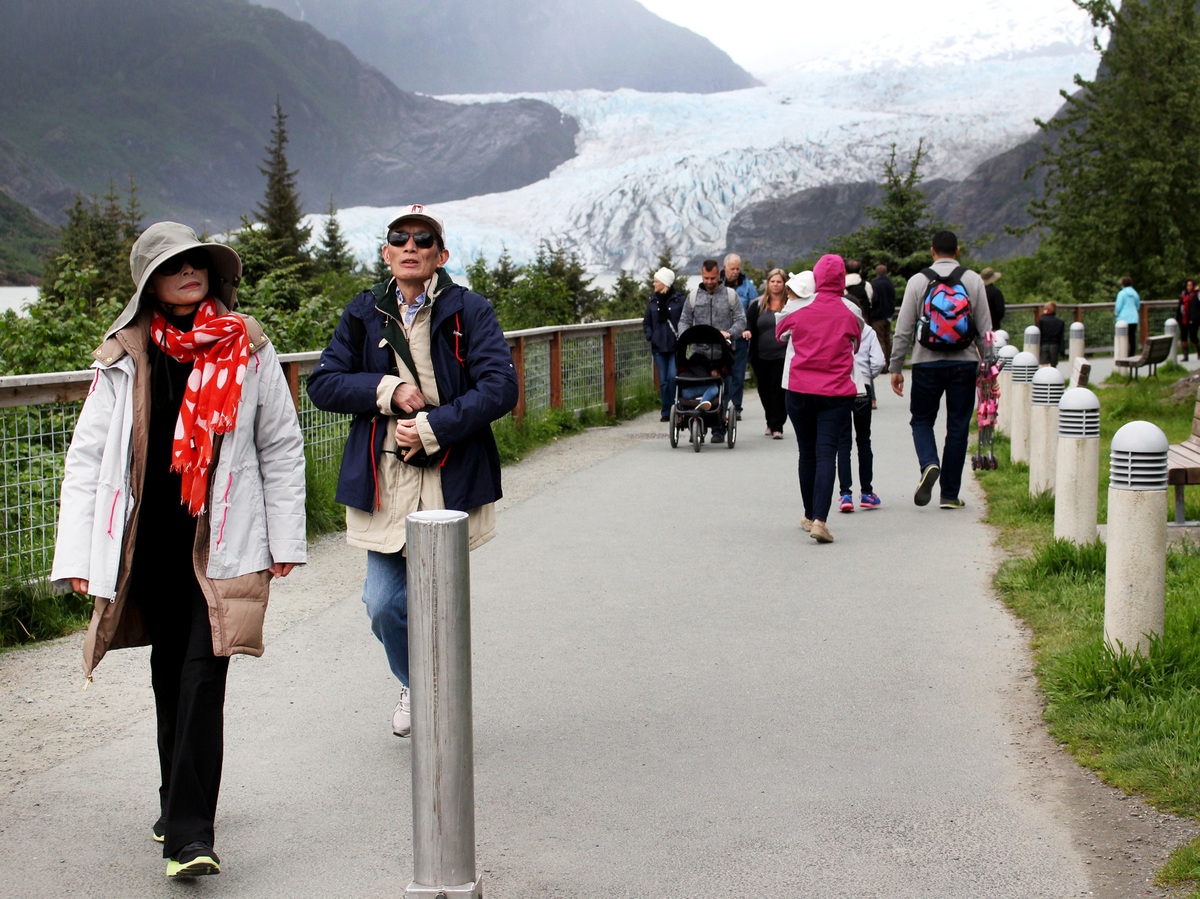 About 80 percent of the people who come to the Mendenhall Glacier in the summer are tourists.

"The last time we were in Alaska we were high school sweethearts," Sarah says. "We were 16 years old, so it's nice to come back almost 10 years later and see how the landscape has changed."

It's changed a lot: The glacier has retreated over 100 feet since then. Still, they say they're not worried about what's causing it.

"I think everything is just pure speculation," Joe says. "We don't truly know. Obviously, it's receding and it's changing but it's just one of those natural cycles. Some years they recede. Some years they grow."

Actually, most of the world's glaciers are losing ice. And most of the tourists are engaged in that conversation.

Why Our Brains Weren't Made To Deal With Climate Change

Anna Laing traveled all the way from Scotland to be here. She said she had no idea she'd learn so much about climate change.

"It's just a statement that's out there, normally," Laing says. "And it doesn't really mean much to you until you really see the physical evidence of it. Especially since we're able to touch the glacier there and know what we're losing."

By the end of the century, according to The University of Alaska Fairbanks Geophysical Institute, the Mendenhall Glacier won't even be visible from the visitor center.

This report comes from Alaska's Energy Desk, a public media collaboration focused on energy and the environment.