Accessibility links
Kaine En Español: Pandering Or A Symbol Of Understanding For Latinos? "Speaking Spanish doesn't mean that he understands the issues," one DNC attendee said. Other Latinos say his second language reveals a deeper ability to understand issues important to them.

Kaine En Español: Pandering Or A Symbol Of Understanding For Latinos?

Kaine En Español: Pandering Or A Symbol Of Understanding For Latinos? 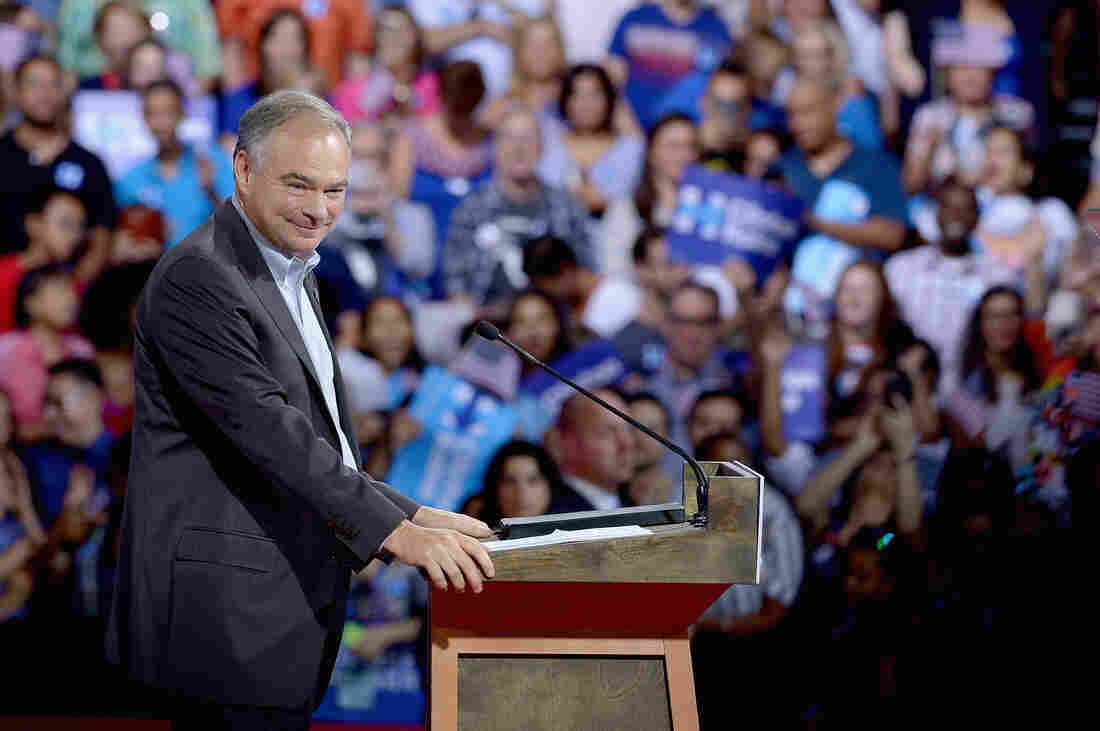 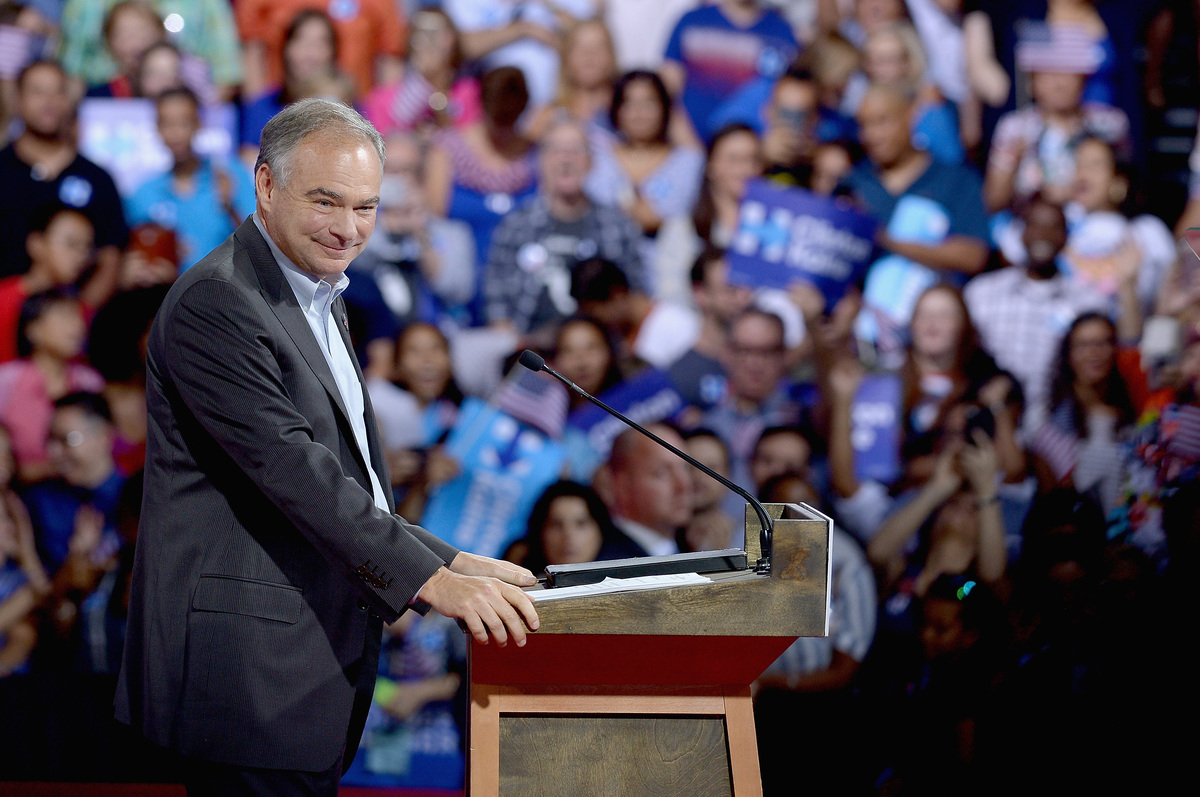 Sen. Tim Kaine spoke Spanish at a rally earlier this month in Miami, where he was announced as Hillary Clinton's vice presidential running mate.

Hilda Solis, former U.S. labor secretary, took the stage at a meeting of the Hispanic caucus in Philadelphia this week and immediately launched into Spanish.

Solis, who is the first Latina to have served in a Cabinet position, issued a ringing endorsement of the vice presidential candidate on the Democratic ticket.

"We are here to support Tim Kaine, our next vice president," she said. "Que habla muy bien Español. Mejor que yo!" (Who speaks good Spanish, she said, better than I do.)

Solis is a superdelegate from California who supports Clinton.

She believes that Kaine's Spanish abilities are matched by his understanding of the Latino community — she cites his time in Honduras, and support for immigration reform.

But some Latinos here at the Democratic National Convention in Philadelphia feel that Kaine's ability to speak Spanish doesn't actually translate into understanding and advocating for Latinos.

The Hillary Clinton campaign has made no secret that they believe Kaine's Spanish will help them with Latino voters across the country. Kaine was introduced in Miami and welcomed the crowd in Spanish. Since then, he gave an interview in Spanish to Telemundo. And it is almost guaranteed that when he takes the stage Wednesday evening to accept his party's nomination, he will speak at least some words in the language of Cervantes. 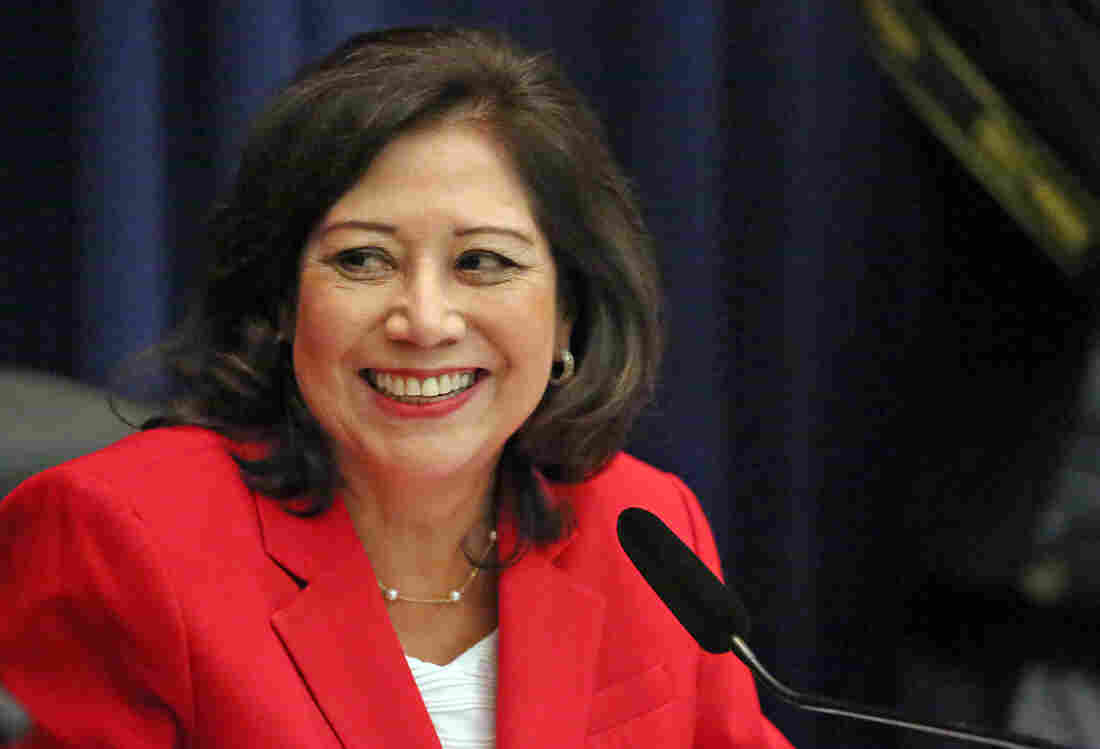 Los Angeles County Supervisor Hilda Solis on her first day as chairman of the Board of Supervisors in 2015. Al Seib/LA Times via Getty Images hide caption

And, of course, it's not all about Latinos — the Democratic Party prides itself on showcasing its diversity, as evidenced on stage this week at the DNC.

In any case, Solis' enthusiasm wasn't shared by everyone in the room. Latinos' relationship with the Spanish language, after all, is complicated and rife with historical baggage.

Rocky "Roque" de la Fuente, who ran against Clinton during the primaries and is now running for Senate against Sen. Marco Rubio in Florida, called Clinton's pick of Kaine "terrible."

He points out that Kaine probably speaks better Spanish than the two Latinos who were thought to be in the running for VP: Housing and Urban Development Secretary Julián Castro and Secretary of Labor Tom Perez.

Polling also tells us that most Latinos don't believe that Spanish is essential to their Latino identity.

Earlier this year, the Pew Research Center found that 87 percent of U.S. born Latinos and 81 percent of registered voters said speaking Spanish is "not necessary to be considered Latino."

What's more, most Latinos in the country speak English. And most — 68 percent — of those who speak Spanish at home, Pew found, also speak English proficiently.

Solis said she believed that Kaine does have an understanding of the Latino community beyond his language skills.

"He spent time in Honduras," she said. "I have seen him speak up about immigration reform and support unaccompanied minors. He has a following that is very big, and I think once the community, the Latino community, the immigrant community and other communities understand what his values are, they will come and they will understand why he was chosen." 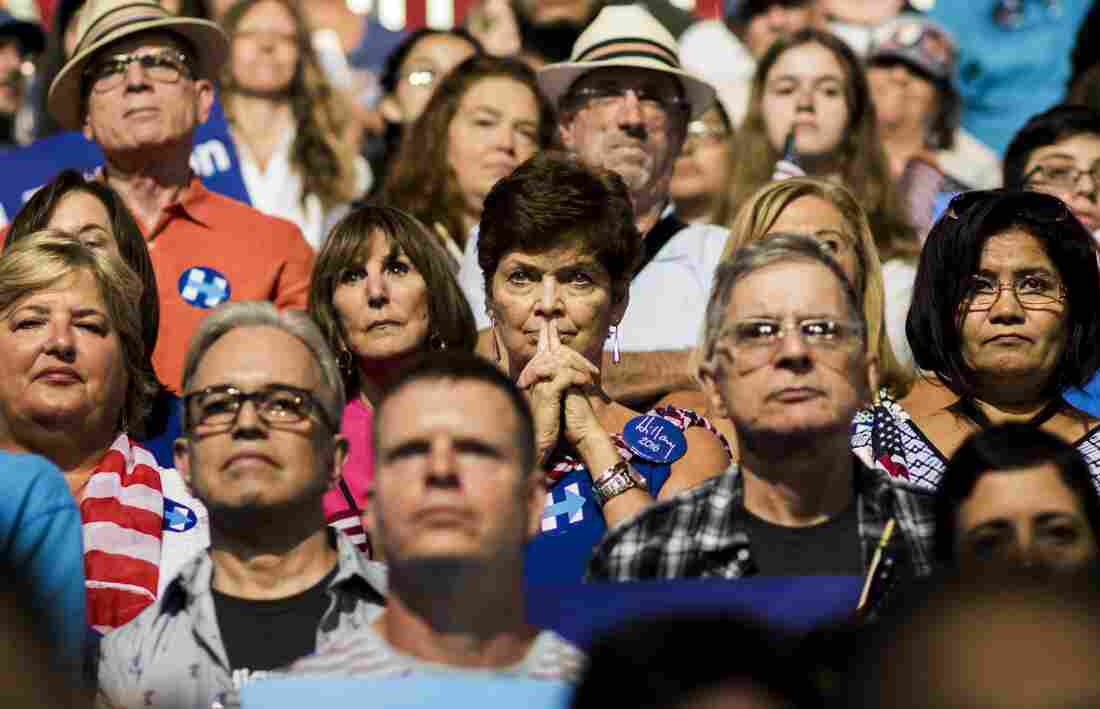 Celina Vasquez and Saúl González lingered in the hall after the Hispanic caucus meeting concluded.

They're Latinos from Texas — González wore a lonestar button-up and Vasquez wore a sequined cowboy hat.

Both of them speak Spanish and both grimaced at the mention of Kaine speaking Spanish. Though Vasquez wasn't completely dismissive.

Any person, she said, who speaks two languages is worth two.

"We're very happy about that. I know that is important and I know how hard it is to acquire another language, so kudos to Mr. Kaine for that," she said.

González said he was disappointed that none of the people of color in the running got the job. Kaine's Spanish seems inconsequential, he said, because "it isn't the same to be able to speak two languages than being bi-cultural."

"I will get on board," he said. "I just need a little time to wrap my head around the choice."

Vasquez said one of the things that bothers her about Kaine using his ability to speak Spanish to reach the Latino community is that Kaine will never face the kind of discrimination that Latinos have faced for speaking Spanish.

In Texas, for example, students were barred for decades from speaking Spanish in school. Many during the period lost the language, and it wasn't until the 1970s that Texas legalized bilingual education. Since then, news reports are often punctuated by news of individual schools across the country barring the use of Spanish.

"Our culture and our history, it has been one of discrimination specifically to our language," Vasquez said. "And I know that Kaine doesn't have experience."