Accessibility links
'You Will Know Me' Says No, You Won't Megan Abbott's novel about a talented young gymnast and her mother starts with a mysterious death, but the real mysteries are the characters themselves: You never really know the people close to you. 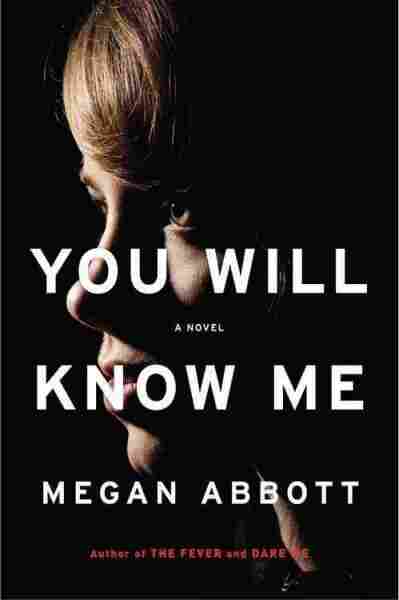 You Will Know Me

Title
You Will Know Me
Author
Megan Abbott

Megan Abbott's novel You Will Know Me, like her other books, thrums with the edge and energy of teenage girlhood; the wild want, the wild daring, the wild selfishness that — as one of the girls' moms says — you're only really allowed when you're young. "Remember that kind of wanting? That kind that's just for yourself? And you don't even have to feel guilty about it? You wouldn't know to."

Devon Knox is a gymnast, a good one. Her dream is the Olympics, and her parents make it theirs, too — practices and equipment and a second mortgage to pay for it all. And then, the handsome boyfriend of her coach's niece, who always helped around the gym, holding doors for the moms, digging retainers out of the foam pit, is killed in a hit-and-run.

Devon's mom Katie, who narrates most of the book, begins to take a harder look at her family: Her blank-eyed daughter, 4'10" and muscled with legs like the trunks of trees. Her overworked husband, who does everything for Devon, for her chance at the Olympics. Why does her young son have dreams of Devon flying, Devon sneaking out at night, Devon with claws for feet, Devon filling his mouth with stones?

Katie knows her daughter's every knot and cord, and that gives a false sense of closeness, of her knowability. That is the book's central, eerie theme: You can't know the people close to you, even if you spend your days focused on the minute details of their bodies, rubbing out muscle aches or adjusting leotards. "But your child's privacy, what did it even mean after you'd spent so many years with your daughter's body as the center of your life?"

Megan Abbott has written a book with the taut and muscular ruthlessness of a gymnast, a book that disorients with eerie countermelodies, constant reminders of the vulnerability of bodies, even in its festive moments: at a party, a glistening ham is "pink as a newborn."

Megan Abbott has written a book with the taut and muscular ruthlessness of a gymnast, a book that disorients with eerie countermelodies, constant reminders of the vulnerability of bodies, even in its festive moments.

She describes the bodies of the gymnasts with eerie, sinister precision; they become muscled machines, not the property of the girls but of everyone. Devon is almost like a prize-winning horse — her family's connection to the extraordinary. Even in the womb, her parents feel her body "arching and minnowing and promising itself to them both."

The gymnasts feel doubly the mortification of flesh: The ordinary overwhelming awareness and embarrassment that washes over many teenagers at puberty, but also the knowledge that adulthood, inevitable and encroaching, will wreck all of their ambitions. The girls on the gymnastics team talk about it like an unimaginable horror; they see the expiration date and they try to ward off hips, breasts, periods. "We need to get to her before she changes," says Devon's coach.

"It aged girls and kept them young forever at the same time." Abbott writes. "Ages thirteen, fourteen, fifteen, sixteen, even seventeen came and went for the [gymnasts], and their bodies remained flat and smooth and scythes except their perky muscled behinds."

"No one ever tells you there'll be so much blood." Devon murmurs in her sleep after her first period. Or does this line, with its echo of Lady Macbeth's sleepwalking remorse, suggest something else altogether? "Art not without ambition," Lady Macbeth chides her husband, "But without / The illness should attend it." Devon's whole life is gymnastics; The gym "gray, severe, powerful," is her austere temple. And she knows she's supposed to do anything to get to the Olympics. If ambition is an illness, Devon is sick. They all are.

Devon's inscrutability — on the beam, she is a "stone Artemis" — makes it hard to care too much what happens to her. And the answer to the book's puzzle — who killed Ryan? — is clear from far away. But the novel's draw is not really the mystery itself but Katie's slow realization that her life is not what she thought it was. That is, after all, what frightens us most: Not unknown monsters but known ones.

Good gymnasts seem to flip effortlessly as coins. They make it look easy. Good writers do, too. Like it isn't all chalk and blood, or laptop glow and paragraphs rewritten endlessly, but a natural expression of weightlessness, drive, flight. You Will Know Me takes swift, unsettling, apparently effortless flight.