Accessibility links
Taking On A U.S. Senator As A Student Propelled Clinton Into The Spotlight Hillary Clinton has given hundreds of speeches in her political life, but we're going to dig deep into the first time she entered the national spotlight as a student at Wellesley College. 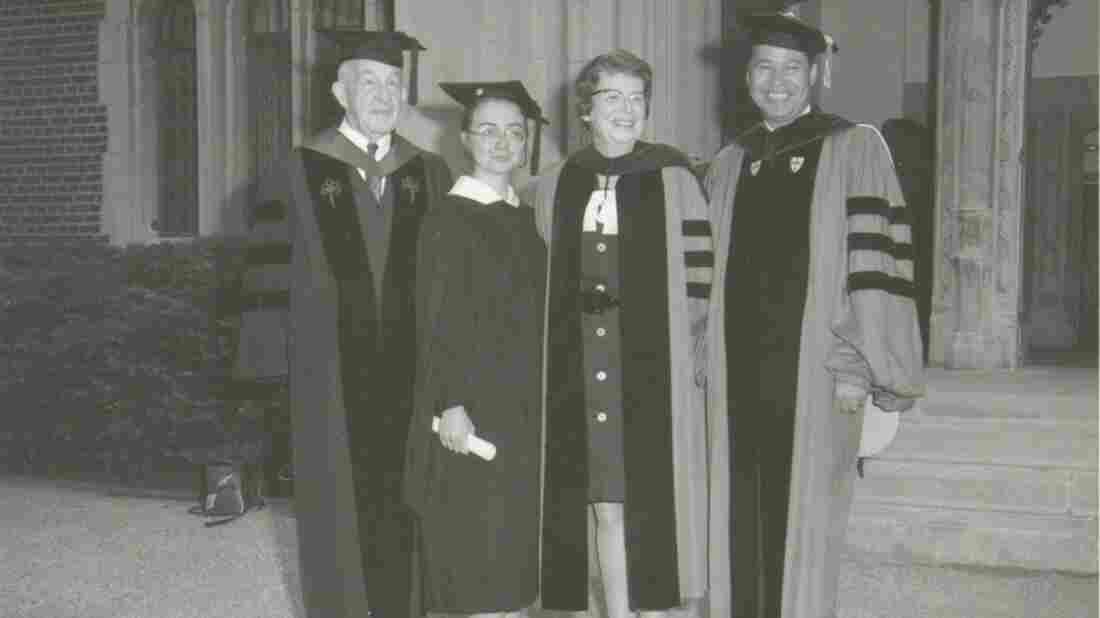 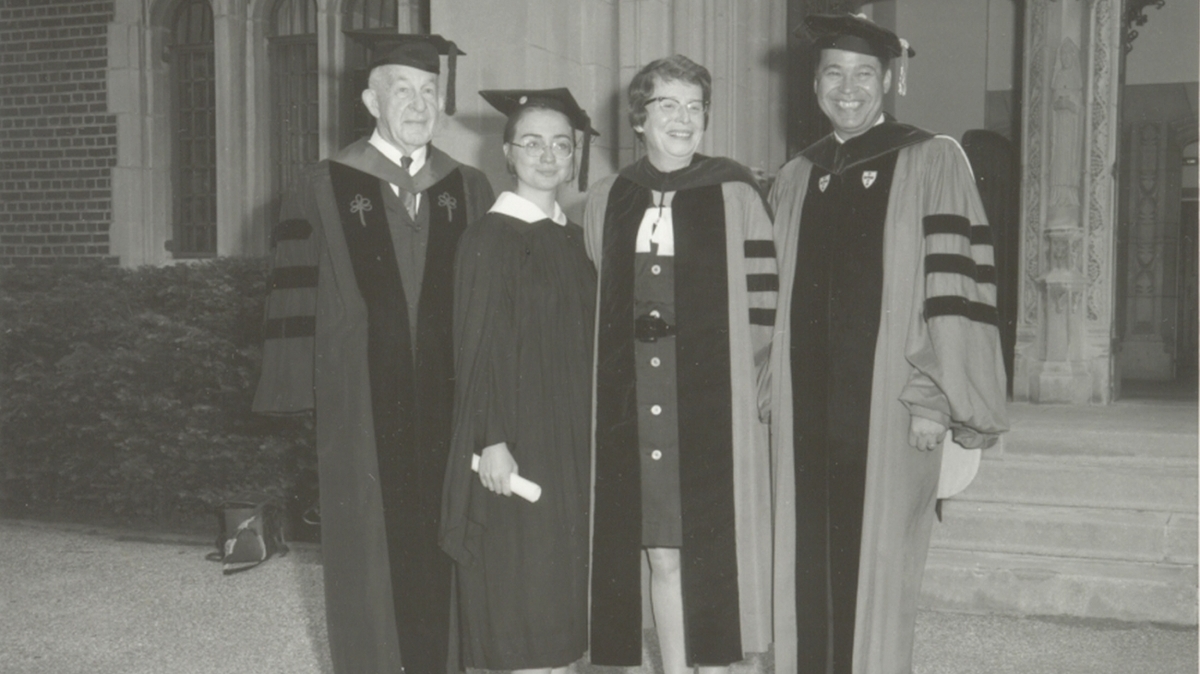 Hillary Clinton (second from left) during her 1969 commencement at Wellesley College.

Hillary Rodham's 1969 commencement address at Wellesley College did not stand out because of what she said.

It stood out because of how she said it, and because she said it at all. This is a story not about words, but about context.

Before 1969, Wellesley had never had a student speaker at commencement. Administrators spoke and special guests spoke, but students at this women's college didn't have a voice on graduation day.

Eldie Acheson, a classmate of Hillary Clinton, then Hillary Rodham, led the effort to have a student speak at their commencement. She says the fact that they had never before had a student speaker seemed crazy. But it wasn't easy.

The class of '69 had been through a lot together. When they started college, there was still a hint of the innocence of the early 1960s. By the time they were set to graduate, the Vietnam War and protests against it were in full swing; college campuses had become centers of activism and conflict; and both Martin Luther King Jr. and Bobby Kennedy had been assassinated.

Acheson says she and her classmates wanted to mark that and the transition to their adult lives. And eventually, Acheson says, the administration relented.

"The administration switched its position," she recalled. "The president of the college said, 'OK, we will afford that opportunity to the graduating class of '69.' " 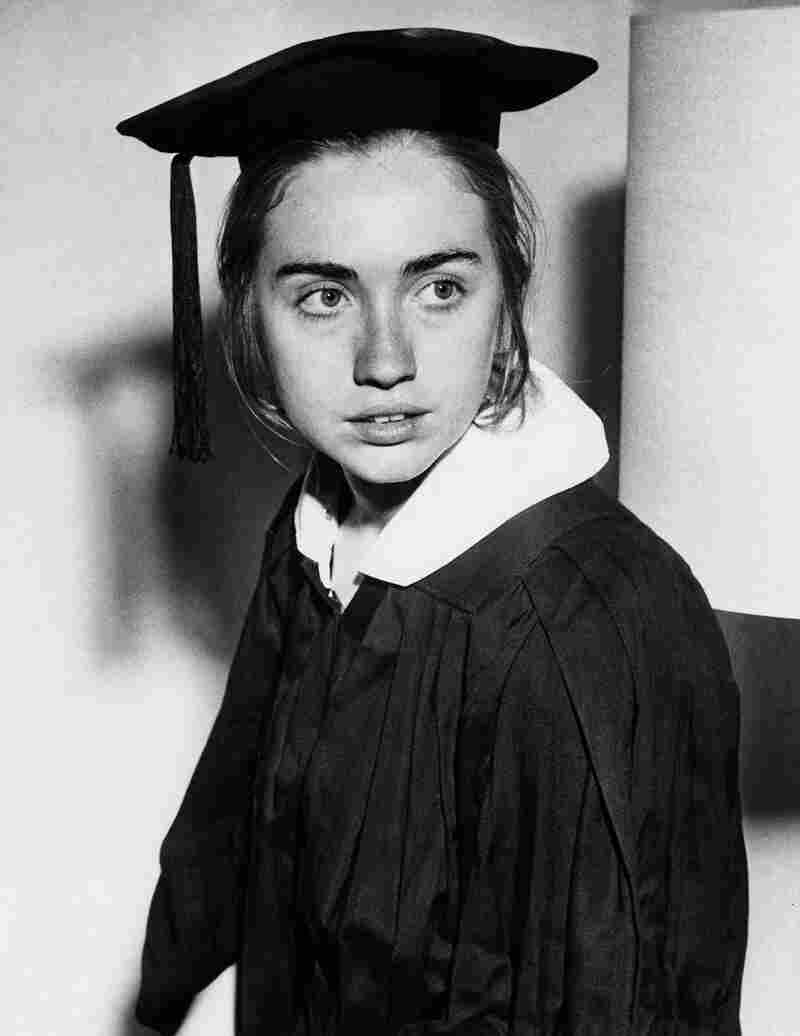 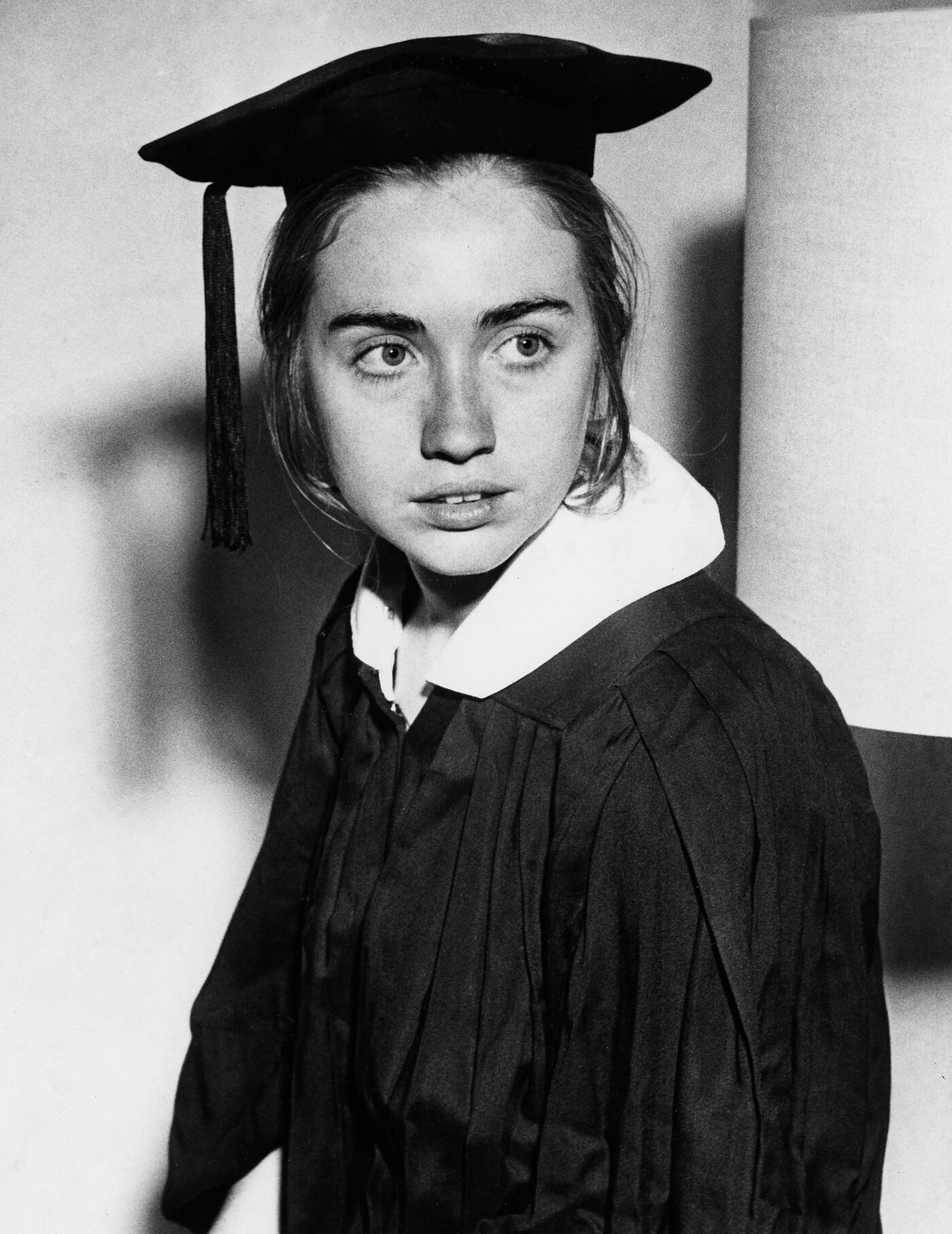 Clinton was the first student to deliver a commencement speech at Wellesley College in 1969. Her criticism of Sen. Edward Brooke's speech received national attention.

Acheson doesn't remember how it came to be that Rodham was chosen to give the speech. But she was the student body president and was well-known by students and faculty alike.

Hillary Clinton wrote in her book Living History that she fretted over the remarks, worrying about how she could fit their tumultuous four years into a single speech. She wrote that classmates came by offering her ideas and often conflicting advice.

Her professor and adviser at the time, Alan Schechter, says he remembers it clearly.

"Hillary had read the speech to me beforehand. Not for my approval, but to get my reaction to it," Schechter said, "and I thought it was a perfect example of youthful idealism at the time, where young people were dissatisfied with what was happening in our society."

The Day Of The Speech

But the speech Rodham read to Schechter is only part of what she delivered at the commencement ceremony. And it's the part that wasn't planned that drew all the attention.

The special guest speaker that day was Sen. Edward Brooke. A moderate Republican from Massachusetts and the first African-American popularly elected to the U.S. Senate. His speech celebrated incremental progress and spent a lot of time arguing against protest. Ultimately, he said, he believed "the overwhelming majority of Americans will stand firm on one principle: Coercive protest is wrong, and one reason it is wrong is because it is unnecessary."

After Brooke, it was time for Rodham to speak. The school's president, Ruth Adams, introduced her with praise.

"There was no debate so far as I could ascertain as to who their spokesman was to be, Ms. Hillary Rodham," Adams said. She went on to describe Rodham as "good-humored, good company and a good friend to all of us." 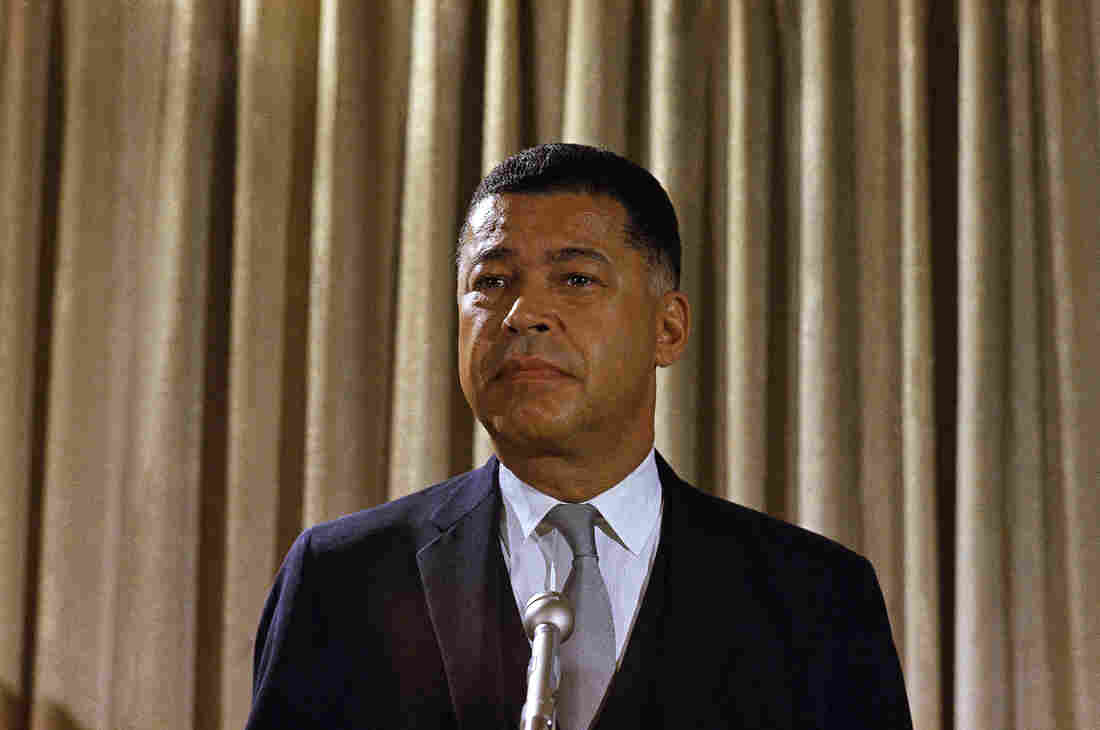 Sen. Edward Brooke, R-Mass., delivers a speech in 1968. He was the special guest speaker for Wellesley's commencement in 1969. AP hide caption 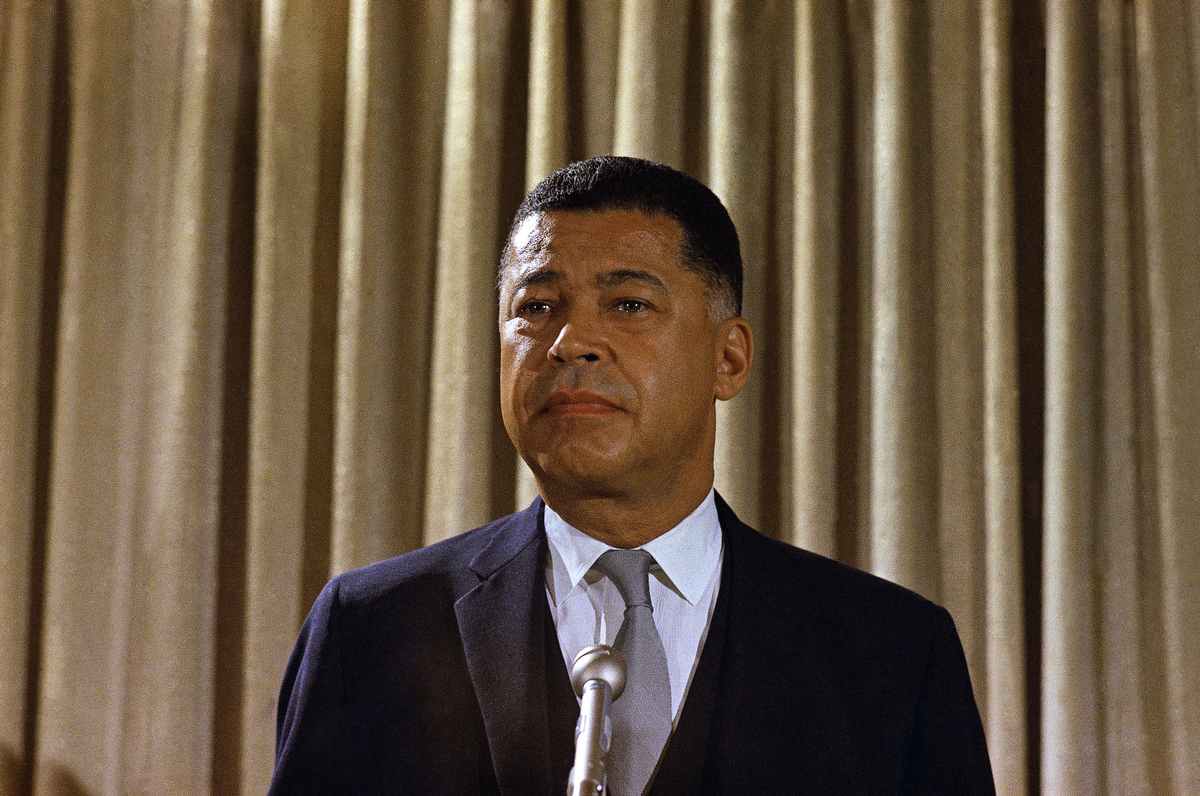 Sen. Edward Brooke, R-Mass., delivers a speech in 1968. He was the special guest speaker for Wellesley's commencement in 1969.

When she stepped to the lectern, Rodham didn't go directly to her prepared remarks. She spoke extemporaneously instead:

"I'm very glad that Ms. Adams made it clear that what I am speaking for today is all of us. The 400 of us. And I find myself in a familiar position, that of reacting. Something that our generation has been doing for quite a while now. We're not in the positions yet of leadership and power, but we do have that indispensable element of criticizing and constructive protest."

She broke from her script to react to Sen. Brooke's remarks.

"This has to be very quick because I do have a little speech to give. Part of the problem with just empathy with professed goals is that empathy doesn't do us anything. We've had lots of empathy; we've had lots of sympathy, but we feel that for too long our leaders have viewed politics as the art of the possible. And the challenge now is to practice politics as the art of making what appears to be impossible possible."

Schechter, her adviser, was surprised and impressed with how Rodham ad-libbed and then seamlessly moved back into her prepared remarks.

"She was able to go from one to the other without pausing at all," Schechter said. "I was particularly impressed with the skill, with the articulateness that she demonstrated."

And when it was over, others were impressed too. She got a standing ovation, from her classmates at least.

"And that was both in support of the speech and in support of her for going up there and taking it on for us," her classmate Acheson recalled.

But Schechter says not everyone was so pleased with Rodham's performance.

"The administration was not happy afterwards, or at least some people were not happy," Schechter said, "because they felt it was inappropriate for a student to criticize the commencement speaker."

Acheson says Rodham felt she had a responsibility to call out the senator's remarks as insufficient to the moment. But in 1969, it was surprising that a student, a young woman, would break protocol and openly disagree with the remarks of a U.S. senator on a public stage.

And it was news. It made the New York Times and the Washington Post. United Press International, a news wire, circulated a blurb about Rodham's remarks to papers around the country. The Chicago Tribune wrote "Miss Rodham's discourtesy to Senator Brooke was unjustified."

And this all led to Rodham's inclusion in a spread in Life magazine about the class of '69. The article has the subhead "With eloquent defiance, top students protest right through commencement."

Compared to other commencement speeches at the time, Rodham's words weren't all that defiant. It's the context that made them remarkable.

Time, which owns the Life magazine archives, dug up some notes from the photographer and reporter who worked on the story. Rodham said press accounts had been "vastly different from what she actually said," and she was "quite concerned that it be made clear she was not attacking Senator Brooke personally."

It would seem Hillary Clinton's first moment in the limelight was also the beginning of her difficult relationship with the press.