Accessibility links
Chelsea Clinton Looks To Help Her Family Return To The White House The once shy preteen is now a mother of two who has become one of her mother's closest political advisers. On Thursday night, she'll introduce Hillary Clinton as she accepts the Democratic nomination. 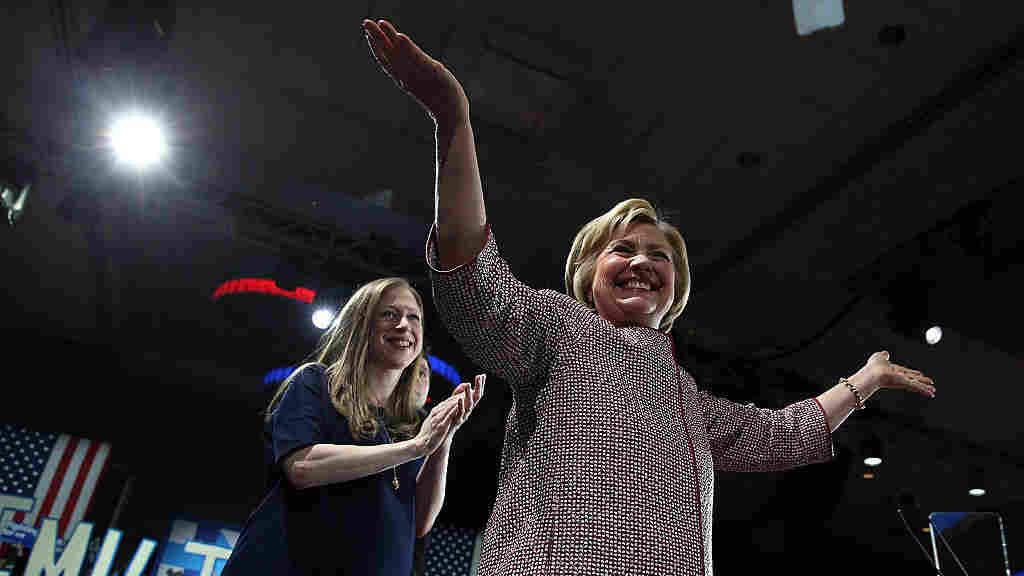 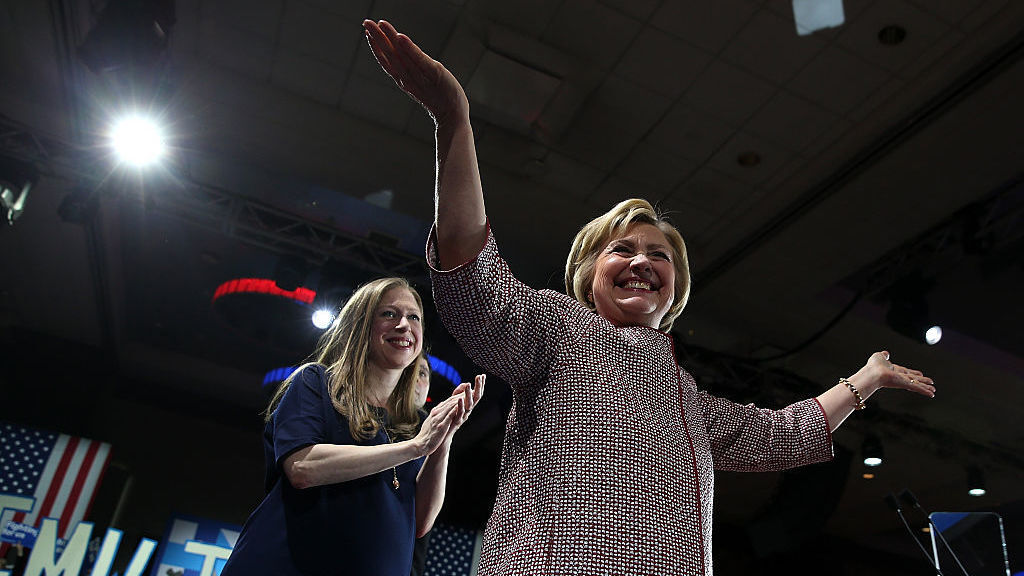 America's first image of Chelsea Clinton was as a curly-haired preteen girl with braces who shied away from the public stage while her father was president in the 1990s.

More than two decades later, the now 36-year-old mother of two will voluntarily step into the spotlight to introduce her own mother as her family seeks a return to the White House.

The only daughter of Bill and Hillary Clinton, Chelsea has never seemed completely comfortable with public life the way her parents have. But now she's embraced the role as a surrogate for her mother, taking on a major part in her family's foundation. And she hasn't ruled out her own political bid one day. 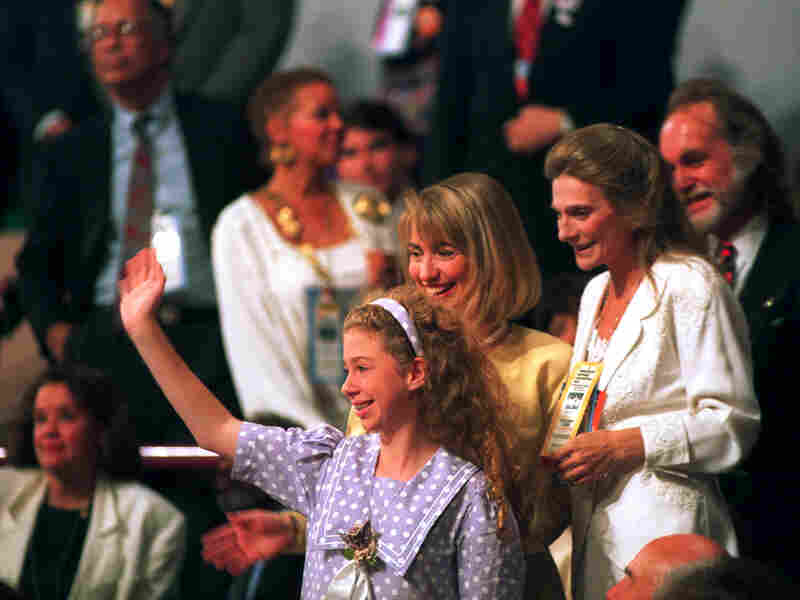 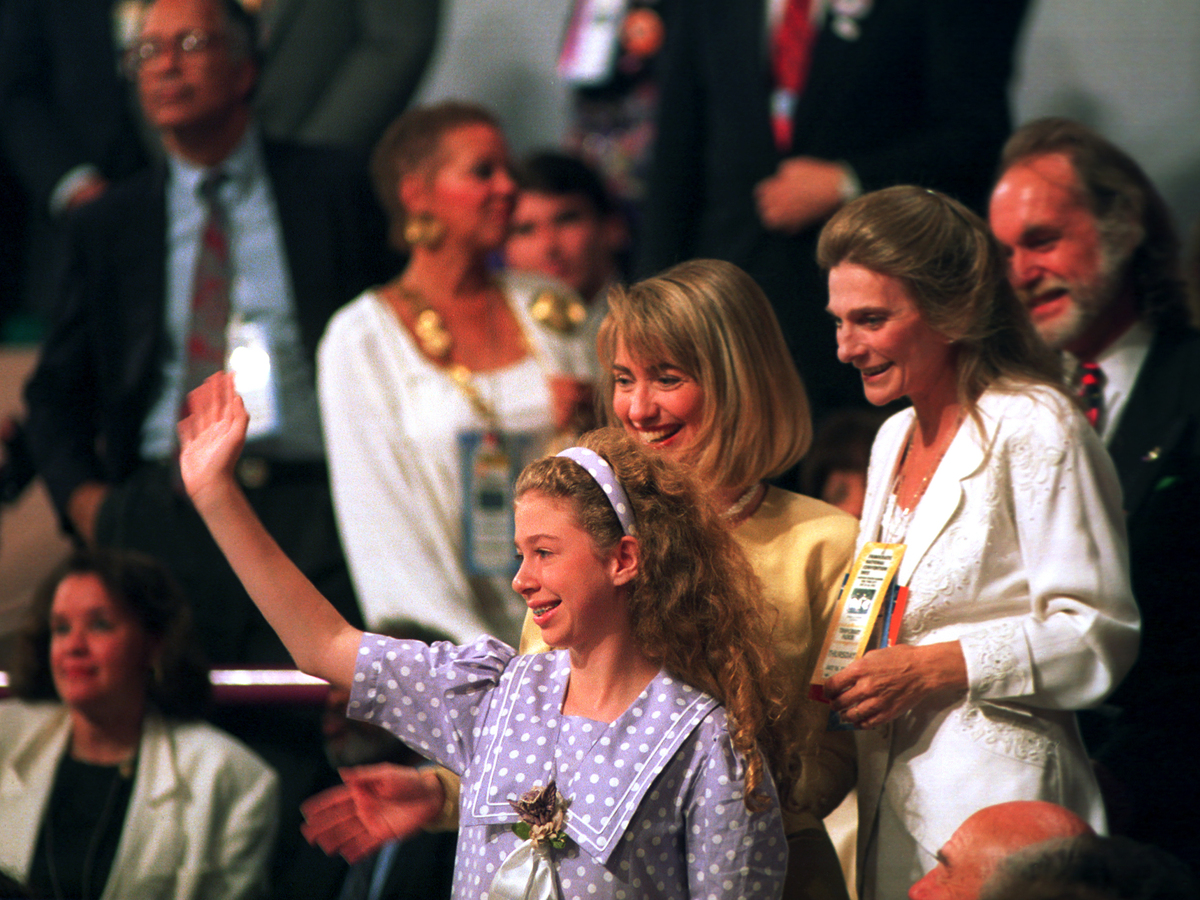 Chelsea Clinton with her mother, Hillary Clinton, at the 1992 Democratic National Convention in New York City where her father accepted the Democratic nomination.

"Gone is the Chelsea who tried to blend in as just another Stanford-educated grind. She has fully embraced being a Clinton and is now deliberately, willfully, on the road to greatness," Vanity Fair wrote in a profile last year.

During her father's second term — and just as the controversy over his affair with Monica Lewinsky and subsequent impeachment was happening — Chelsea decamped to college clear across the country in California. At Stanford University, she toyed with the idea of studying medicine but eventually majored in history.

It was there she reconnected with her now-husband Marc Mezvinsky, whom she started dating in 2005 and married in 2010. He knew a little about being a political scion, too, but nothing on the level Chelsea had to endure. Both of his parents were Democratic members of Congress — his mother, Marjorie Margolies, D-Pa., and his father, Edward Mezvinsky, who represented Iowa but went on to chair the Pennsylvania Democratic Party. His mother had even fallen on her political sword for Chelsea's father, casting the deciding vote for President Bill Clinton's 1993 budget that helped lead to her ouster the next year after a single term.

After graduation from Stanford, Chelsea Clinton headed across the pond for graduate studies at Oxford University, like her father had. She later returned to New York City, making it her home ever since, and embarked on some disparate career interests.

First, she worked for the consulting firm McKinsey & Co. for three years and went to Wall Street for another three years to work for a hedge fund. She returned to school at Columbia University, where she got a Master of Public Health. She dabbled in academia next, working for New York University and then teaching graduate classes at Columbia. She also began pursuing a Ph.D. in international relations back at Oxford, which she completed in 2014.

One of the most scrutinized, and puzzling, career choices she made was to join NBC News as a special correspondent in 2011. Reportedly earning an initial annual salary of $600,000, she contributed to the now-defunct Rock Center with Brian Williams and NBC Nightly News. She worked mostly on feature stories and the network's "Making a Difference" series. She ended up getting negative press for what seemed like a cushy job she got because of her famous last name. She eventually moved to a month-to-month contract and cut ties with the network completely in August 2014, as it became clear her mother was moving to another run for the White House.

Her latest major endeavor has been working alongside her parents at the Clinton Foundation, where she serves as the group's vice chair. She's traveled to Africa with her father and worked on the organization's initiatives to improve international public health, reduce HIV/AIDS and increase opportunities for women and girls in the developing world. 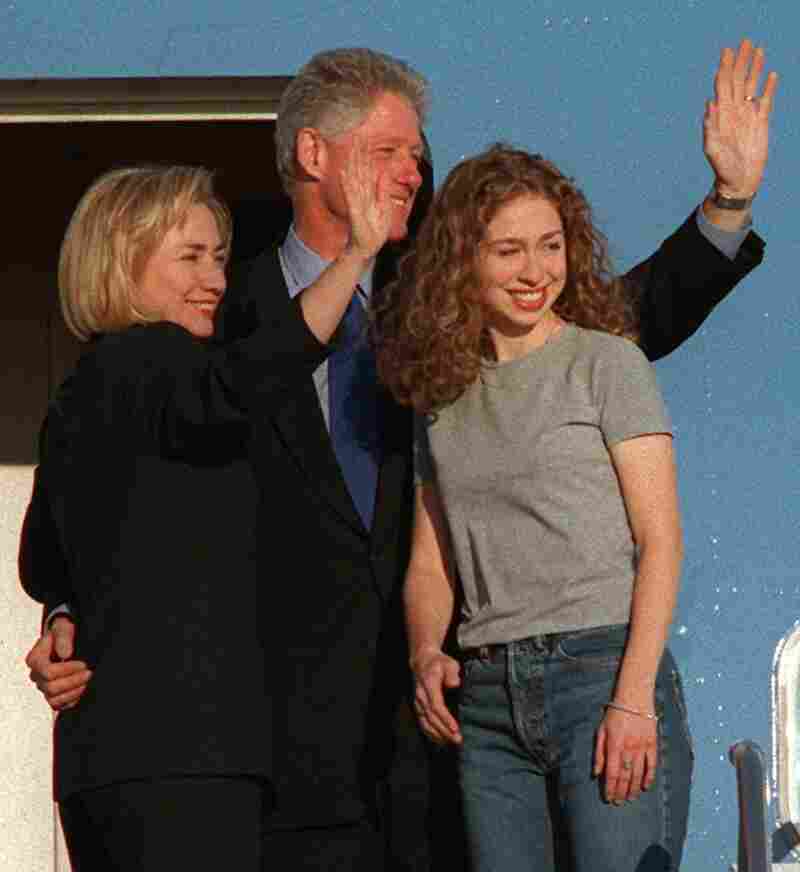 President Bill Clinton and first lady Hillary Clinton wave as they depart from Andrews Air Force Base with Chelsea on her way to starting her freshman year at Stanford University. Tyler Mallory/AP hide caption

Those close to the Clintons said working there made Chelsea realize the legacy she'll be tasked with carrying on. She embraced her role as a close adviser to both her parents, referred to in Politico as "the invisible hand of Chelsea."

"As she's been exposed to the foundation and to what her father's doing with his post-presidential life," top Hillary Clinton aide Huma Abedin told Vogue in 2012, "I think a light switched on: This is the legacy I'm going to inherit. To say it is an incredible one is an understatement. She now knows that in 20, 30 years, everything about her father's legacy is in her hands. It's going to be Chelsea's responsibility to carry that torch. This is the core of what her grandmother encouraged her to do: embrace her inheritance."

She brought the skills she'd honed in the private sector and the finance industry to the organization. In a Fast Company profile in April 2014, the magazine said she was hands-on with the foundation and helped beef up its infrastructure.

"My father has always been such a doer. He had never focused on ensuring that we had the functions that not only enabled [other] doers to focus on doing, but also to help us keep systematic track of all the work that was being done," she told Fast Company.

Of course, plenty of controversy has arisen from the foundation's inner workings and its funding, especially the foreign donations it accepted while Hillary Clinton was secretary of state.

Chelsea finally gave her parents the title they had both been coveting for a long time — grandparents — in September 2014 with the birth of her daughter, Charlotte. Her son, Aidan, was born in June. In 2015, she published her first book, titled It's Your World: Get Informed, Get Inspired & Get Going! aimed at inspiring children to get involved in their communities and the world.

But now, after trying to straddle a delicate balance of her own path and yet still upholding her familial obligations, she has returned to the starring role of political daughter. 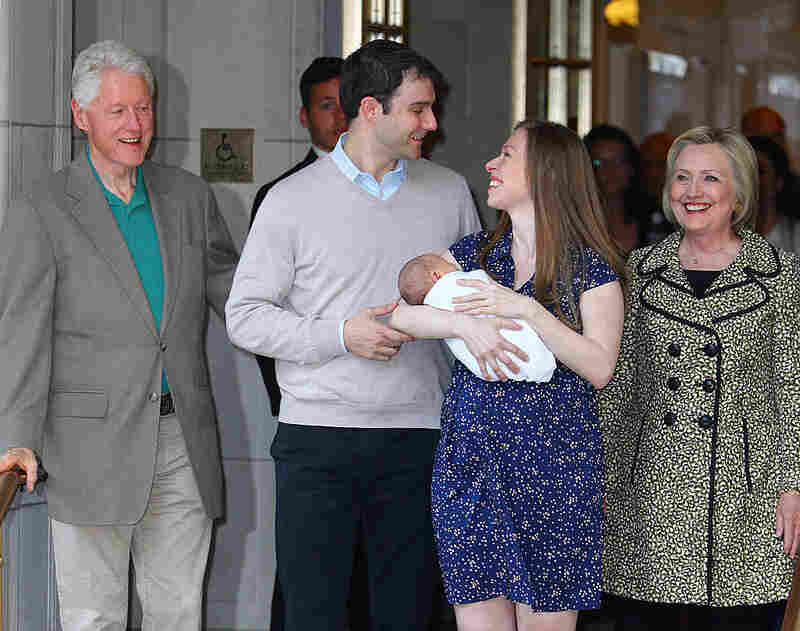 Chelsea Clinton and her husband, Marc Mezvinsky, leave the hospital after the birth of their son, Aidan, last month, along with her parents Bill and Hillary Clinton. James Devaney/Getty Images hide caption

In both of her mother's presidential runs, she has appeared frequently on Hillary's behalf and alongside her. That's come with increased scrutiny and a departure from the private life she'd worked hard to protect. Politico media critic Jack Shafer wrote earlier this year that it was "time for Chelsea Clinton's easy ride to end" after she launched a "reckless" attack on Bernie Sanders over his health care plan.

For a candidate criticized as too rigid, cold and calculating, the best thing Chelsea can do is work to humanize her mother and break those stereotypes. On Tuesday night, her father painted a heartwarming picture of a doting mother who fussed about Chelsea's college dorm room, putting down drawer liner paper.

Expect Chelsea to build on that with more anecdotes in the same way that Ivanka Trump did for her father last week. It's a speech her spokeswoman has said she's been working on for a couple of weeks. And while Chelsea also introduced her mother at the 2008 convention, this time she will likely draw on her own new experiences as a mother to try to reintroduce Hillary Clinton to a public all too familiar with her famous family.

"[O]ne of our core values in this country is that we are the land of equal opportunity, but when equal hasn't yet included gender, there is a fundamental challenge there that, I believe, having our first woman president— whenever that is — will help resolve," Chelsea told ELLE magazine last year.

On Thursday night, she'll help her mother take the steps to try to become that first female president — and break what the candidate has called the "highest and hardest" glass ceiling.