Accessibility links
'We Are Not Afraid': Clinton Delivers Grounded, But Not Soaring, Speech Clinton's nomination completes the field for an American political campaign without precedent. She has now officially become Republican Donald Trump's Democratic rival for the presidency.

'We Are Not Afraid': Clinton Delivers Grounded, But Not Soaring, Speech

'We Are Not Afraid': Clinton Delivers Grounded, But Not Soaring, Speech 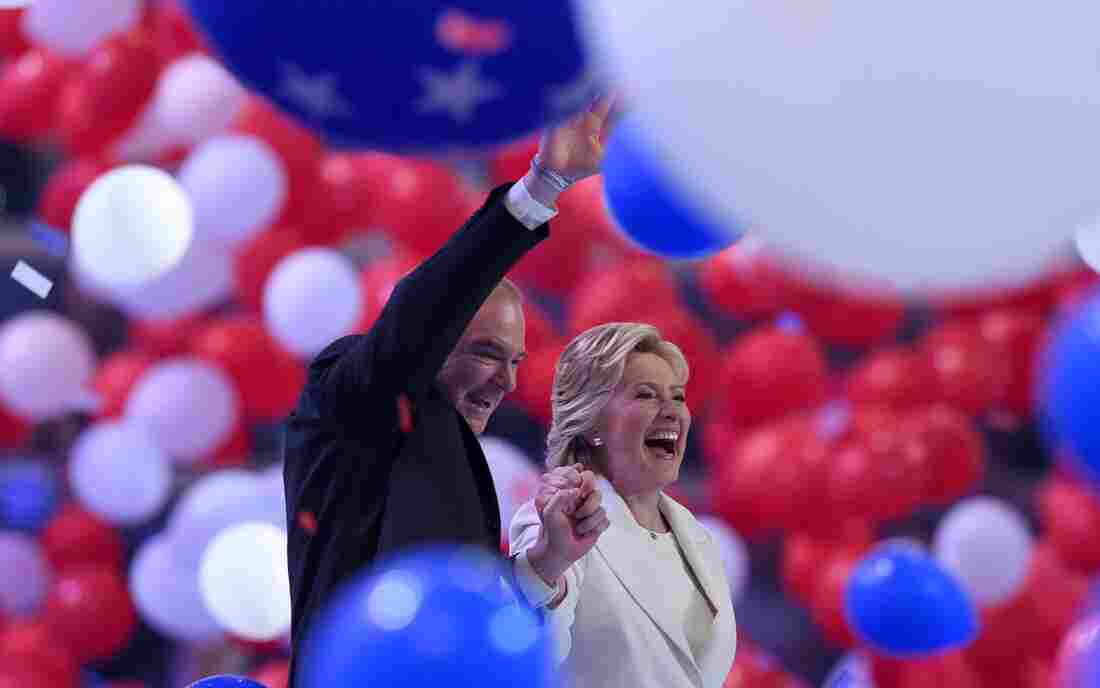 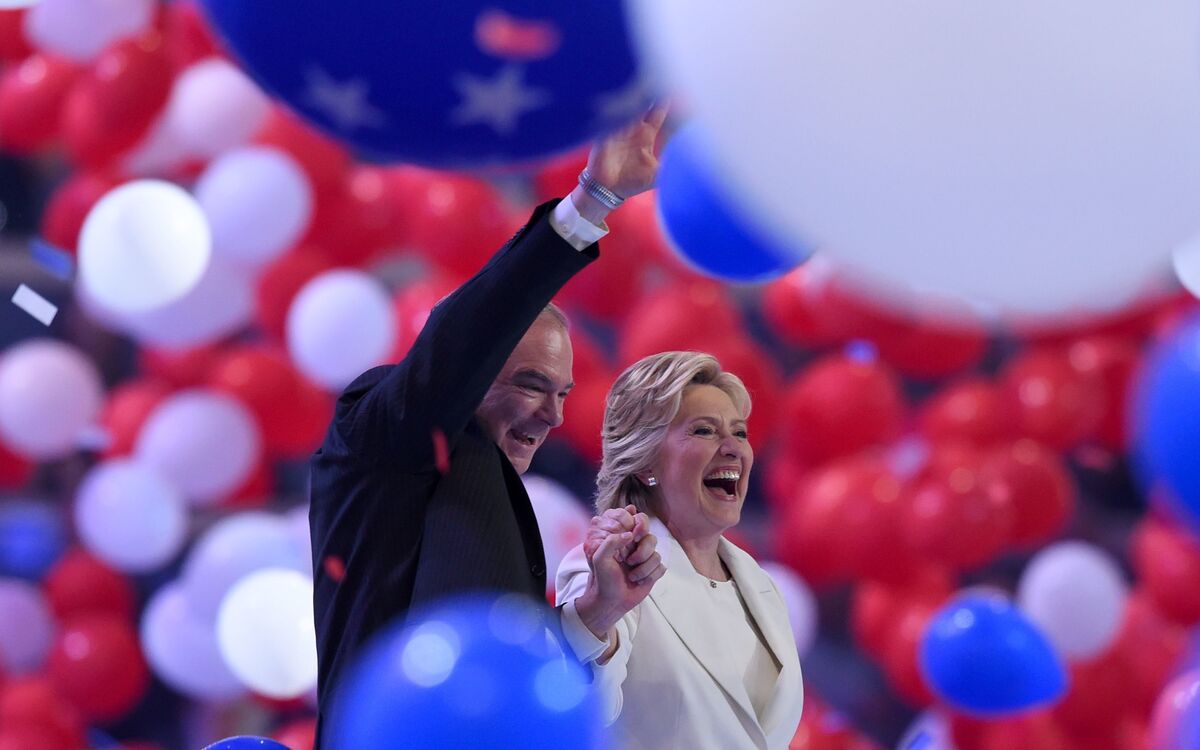 Hillary Clinton accepted her party's nomination on Thursday, completing the field for an American political campaign without historical precedent.

"It is with humility, determination and boundless confidence in America's promise that I accept your nomination for president of the United States," Clinton said.

It was one of the themes that flared often during the four days of the Democratic National Convention in Philadelphia. Sanders supporters disrupted the first invocation on Monday and then disrupted other proceedings with chants against war and the Trans-Pacific Partnership free trade agreement. Both former Defense Secretary Leon Panetta and retired Gen. John Allen were disrupted by chants of "No more war! No more war!" 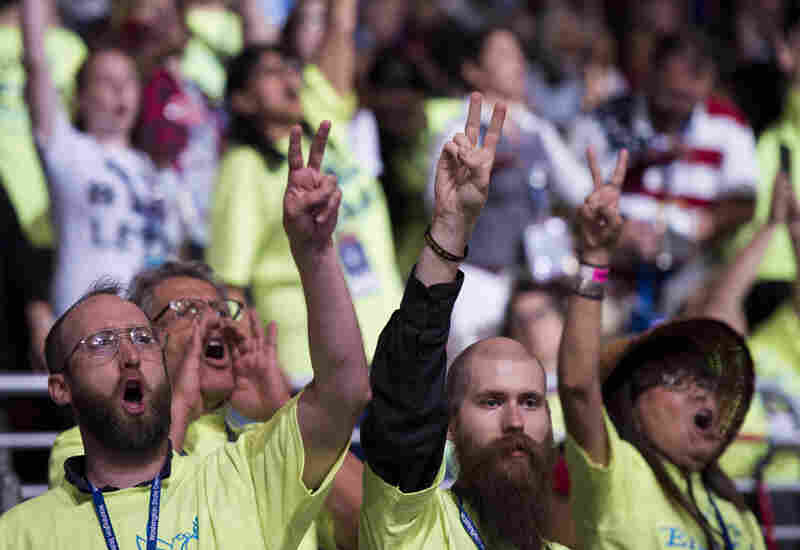 "I want you to know, I've heard you," she said. "Your cause is our cause. Our country needs your ideas, energy and passion."

Clinton summoned the early days of the nation, when the Founding Fathers met in Philadelphia. They were divided, she said, but soon they began "finding common purpose."

"And by the time they left Philadelphia, they had begun to see themselves as one nation," she said. "That's what made it possible to stand up to a king. That took courage."

Clinton's speech was not soaring like speeches Democrats have grown accustomed to with President Obama. Instead, Clinton gave a speech grounded in specific policy proposals: She promised to overturn Citizens United — "with a constitutional amendment if necessary" — and reform the criminal justice system She promised to fight for a living wage, tuition-free college for the poor, equal pay for women, comprehensive immigration reform, gun control, and to make Wall Street and corporations "pay their fair share" in taxes.

Clinton contrasted her proposals to what she said was the vagueness of Trump's plans and, as she has done before, went after Trump's temperament and vision for America.

"He's taken the Republican Party a long way from 'Morning in America' to 'Midnight in America,' " she said. "He wants us to fear the future and fear each other."

She added: "Now we are clear-eyed about what our country is up against. But we are not afraid."

Clinton closed by calling for unity beyond her party. She called for Americans to come together to find solutions to the big problems facing American society.

"We have to heal the divides in our country," Clinton said. "Not just on guns. But on race, immigration and more. That starts with listening to each other, hearing each other, trying, as best we can, to walk in each other's shoes."

We live-blogged the last night of the Democratic National Convention. If you want a blow-by-blow keep scrolling:

Clinton took a few swipes at the Republican presidential nominee Donald Trump. This is one of the most cutting:

"Donald Trump can't even handle the rough-and-tumble of a presidential campaign.

"He loses his cool at the slightest provocation. When he's gotten a tough question from a reporter. When he's challenged in a debate. When he sees a protester at a rally.

"Imagine him in the Oval Office facing a real crisis. A man you can bait with a tweet is not a man we can trust with nuclear weapons."

Chelsea Clinton introduced her mother, saying she was onstage tonight as a "very, very proud daughter."

Clinton said her mother's defining trait is that "regardless of what was happening in her life, she was always there for me." 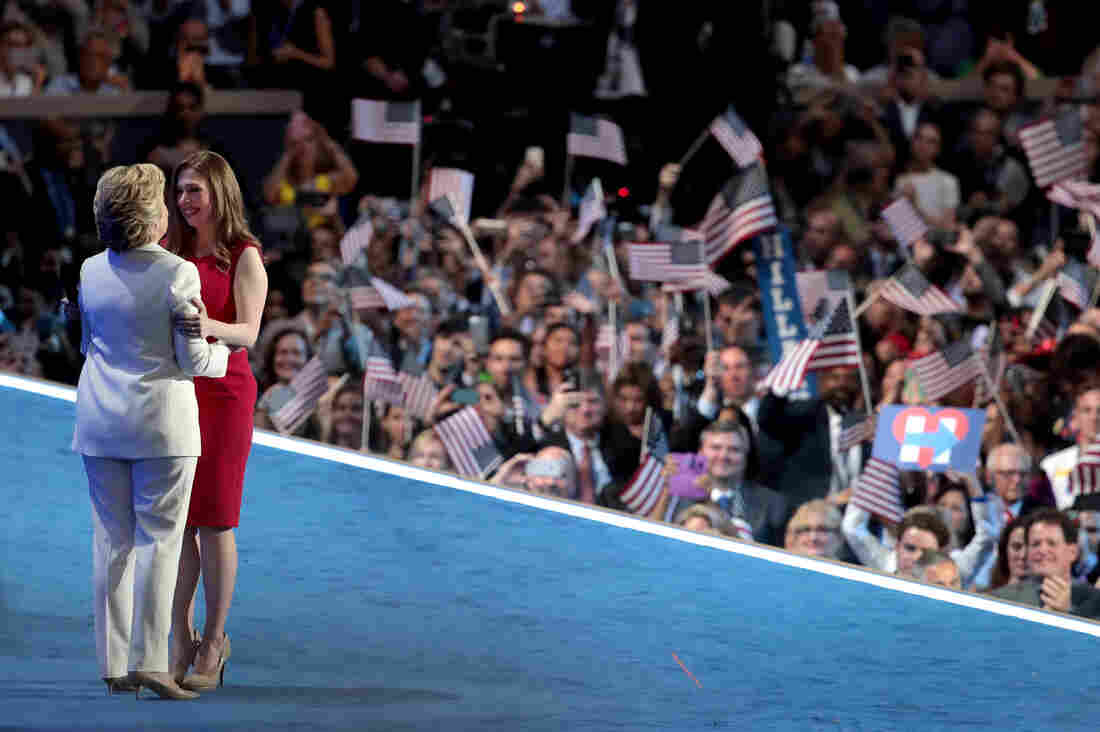 Clinton said that her mother would leave her notes when she went on trips and that her parents always gave her the chance to talk first at the dinner table.

"I always, always knew how deeply they loved me," she said. "That feeling of being valued and loved — that is what my mom wants for every child. It is the calling of her life."

Allen was trying to make the case that Clinton was the best choice for commander in chief.

"I ... know that with her as our commander in chief, our international relations will not be reduced to a business transaction," Allen said. "I also know that our armed forces will not become an instrument of torture, and they will not be ordered to engage in murder or carry out other illegal activities."

But as he spoke, Sanders supporters shouted, "No more war! No more war!" The rest of the arena drowned them out with chants of "USA! USA!"

Sometimes Allen's speech could barely be heard in the arena.

Khizr Khan, whose son was killed serving in Iraq in 2004, delivered a powerful indictment of Donald Trump. He said: "Donald Trump, you're asking Americans to trust you with their future. Let me ask you, have you even read the United States Constitution? I will gladly lend you my copy. In this document, look for the words 'liberty' and 'equal protection of law.' " 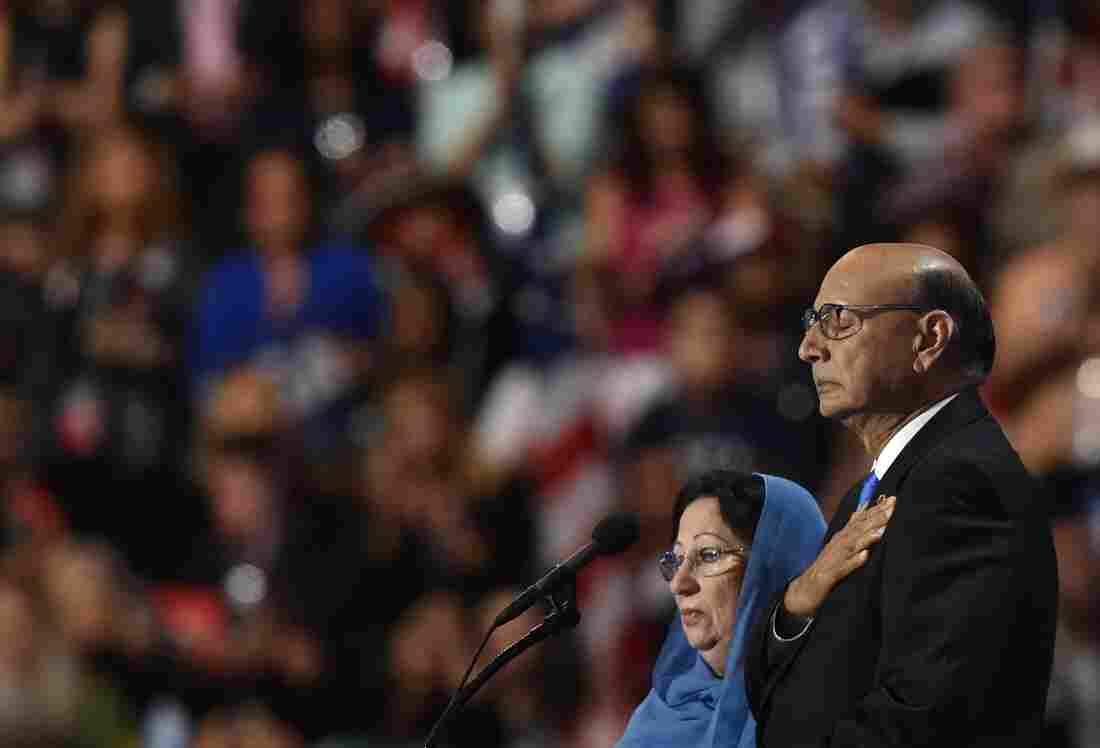 Khizr Khan, father of Humayun S. M. Khan, who was killed while serving in Iraq with the US Army, gestures as his wife looks on during the fourth and final day of the Democratic National Convention. Nicholas Kamm/AFP/Getty Images hide caption

Khan continued to address Trump directly: "You have sacrificed nothing and no one. ... We cannot solve our problems by building walls, sowing division. We are stronger together, and we will keep getting stronger when Hillary Clinton becomes our president."

In some ways, Khan's speech was reminiscent of a speech given by Pat Smith, the mother of diplomat Sean Smith, who was killed in the 2012 attacks on the consulate in Benghazi, at the Republican National Convention.

"I blame Hillary Clinton personally for the death of my son," Smith said.

The Rev. William Barber II, president of the North Carolina NAACP, brought the crowd to its feet when he called for Americans to "fight for the heart of this nation."

Update at 8:46 p.m. ET. A Moment Of Silence For Fallen Officers:

Dallas County Sheriff Lupe Valdez made a call for police and communities to work together.

She said that she was still trying to make sense of the police shootings that happened in Dallas.

"Violence is not the answer," she said. "Yelling and calling each other names is not going to do it. Talking within your own group in your own language only where your groups understands leads nowhere. We have to start listening to each other."

Then she called for a moment of silence. As it came to an end and before Valdez introduced the families of fallen officers, two people in the crowd screamed, "Black lives matter!"

Jennifer Granholm, the former governor of Michigan, just received the biggest applause of the night.

She began by saying she wanted to talk to disillusioned Americans. 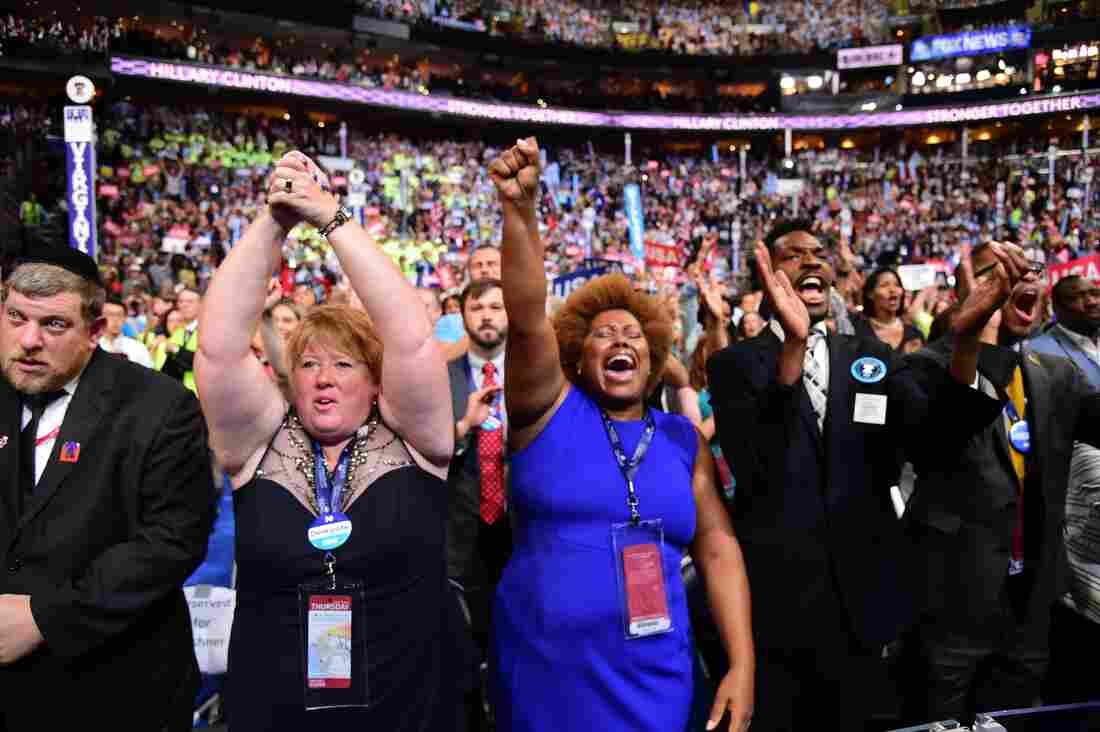 Granholm said the only way to overcome big problems like the loss of manufacturing jobs is to do it as one people.

Donald Trump, she said, doesn't understand that, but Clinton "gets it."

"Our great country spans a continent, but we are all connected to each other, no matter where we live," she said. "So when a miner in Virginia has the dignity of a new job in the advanced steel industry, we all have dignity. When the engineering student in the Sunshine State builds the solar panels of the future, we all succeed."

According to excerpts of the speech released by the Clinton campaign, Hillary Clinton will say that the United States is at "a moment of reckoning."

"Powerful forces are threatening to pull us apart," she will say. "Bonds of trust and respect are fraying. And just as with our founders there are no guarantees. It's truly is up to us. We have to decide whether we're going to work together so we can all rise together."

Clinton will also outline her agenda. Here's another excerpt:

"My primary mission as President will be to create more opportunity and more good jobs with rising wages right here in the United States. From my first day in office to my last. Especially in places that for too long have been left out and left behind. From our inner cities to our small towns, Indian Country to Coal Country. From the industrial Midwest to the Mississippi Delta to the Rio Grande Valley." 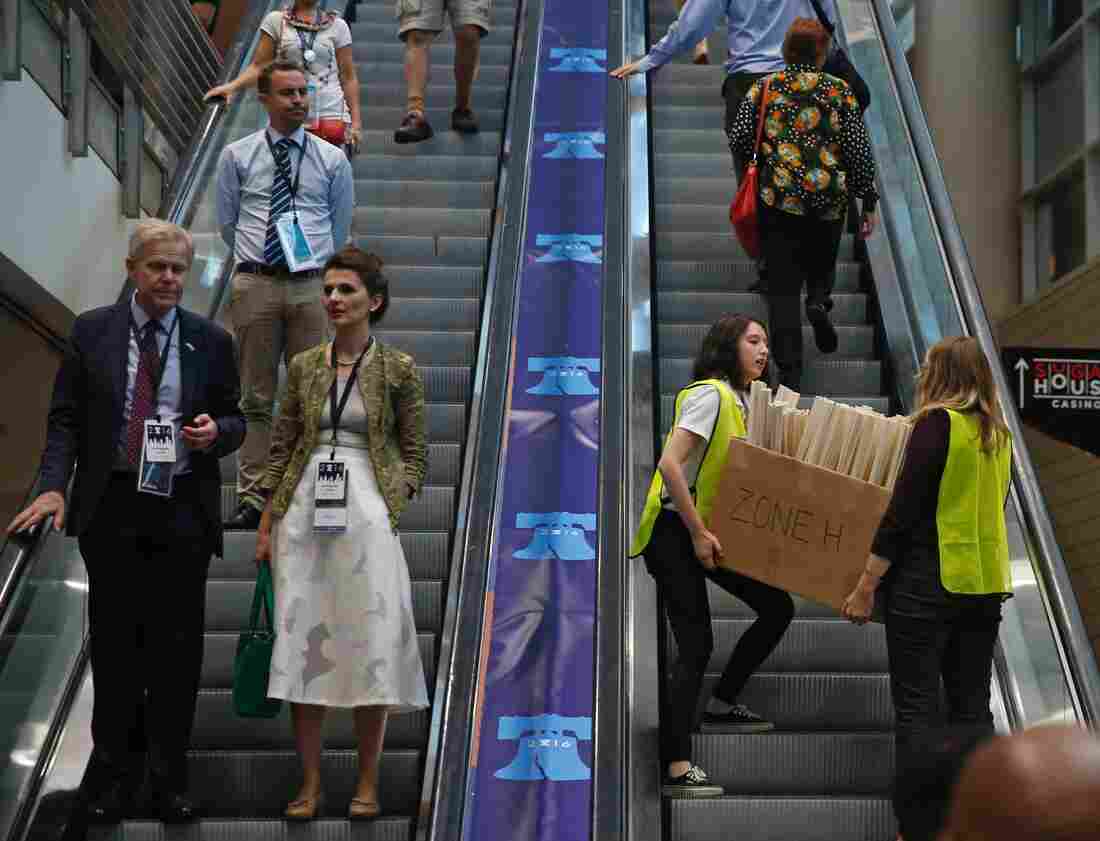 Convention staff carry a box of signs to the upper levels of the Wells Fargo Center to hand out to the crowd. Patrick T. Fallon/AFP/Getty Images hide caption

"In 1922, the only grandparent that I would ever know came to the United States from Mexico," Castro said. "She wasn't a rapist or a murderer. She was a 6-year-old orphan. But as a girl, she walked past storefront signs that read 'No Dogs or Mexicans Allowed.' Her life wasn't easy. And she didn't always feel welcomed. But she never stopped believing in America's sacred promise that her sacrifices would be rewarded with opportunity for herself and her family. She kept up her part of the promise by working her whole life: baby-sitting, cooking, and cleaning houses. And the fact that her grandson is standing here on this stage tonight is proof that America kept its promise, too."