Accessibility links
Photos: Fashion At The Democratic And Republican Conventions Tried-and-true red, white and blue stood out these last two weeks of political convergence. Here are some looks that also tell a story about the parties and the people who sported them. 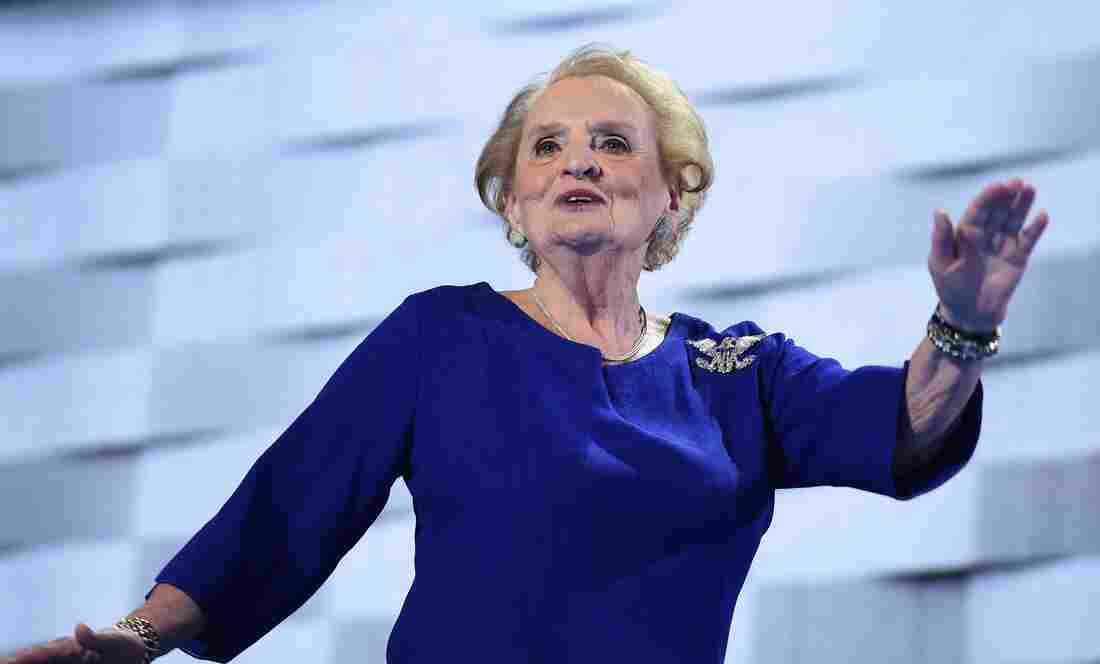 No, we weren't just looking at the women. The fashion at the Republican and Democratic conventions gave us clues about everyone — men, women, politicians and celebrities. Don't even get us started on the delegates (really, that's a photo essay of its own).

The most simple and obvious theme was the pervasiveness of red, white and blue. The colors conveyed the mood of the speakers and reminded us that it is indeed summertime and the weather is hotter than Hades out here.

White stood out. The most prominent wearers were Hillary Clinton and Melania Trump. Clinton's snowy suit matched her speech's optimism and let's-get-to-work attitude. 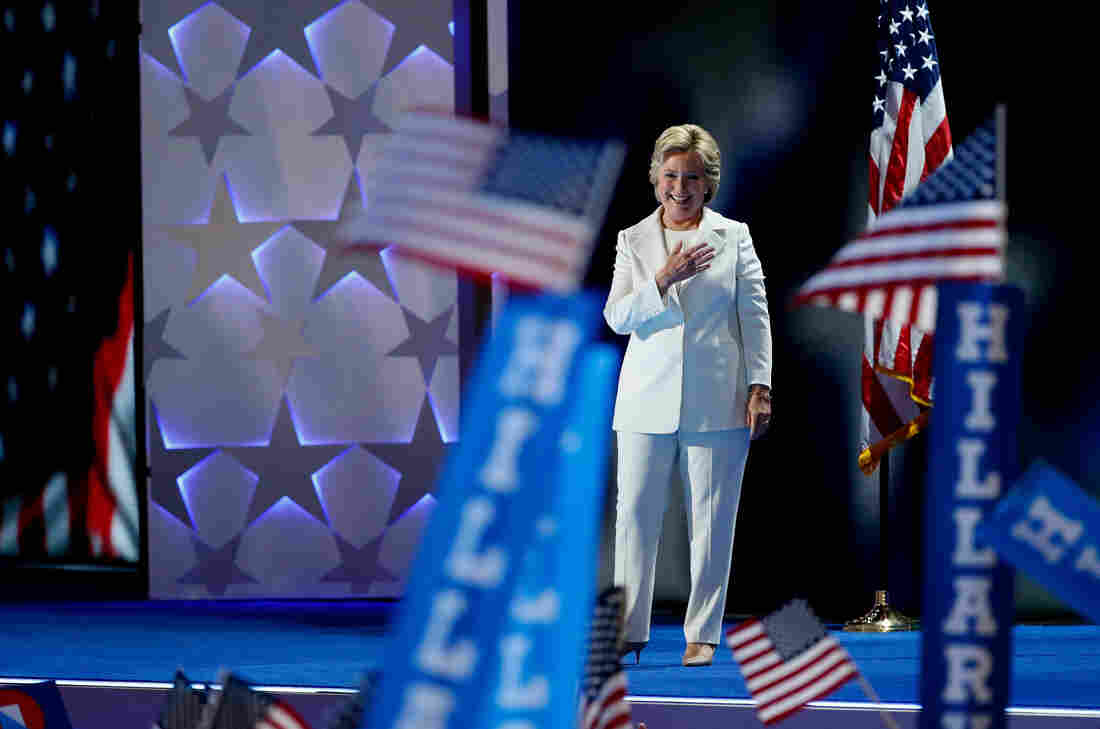 Ms. Trump's outfit at the Republican National Convention also made quite a statement — before people figured out that her speech mirrored Michelle Obama's 2008 remarks. Like Trump, the designer — Roksanda Ilincic — is an immigrant from the former Yugoslavia, Time notes. You could buy a version of the Ilincic piece for yourself, but it'll cost you a couple thousand bucks.

That was basically the end of the Melania Trump dress story. UNTIL ... Thursday night at the Democratic National Convention, when Ohio Rep. Joyce Beatty wore what appeared to be nearly the exact same dress. There are key distinctions: no back zipper and different pleats (we checked the tape).

Who wore it best? 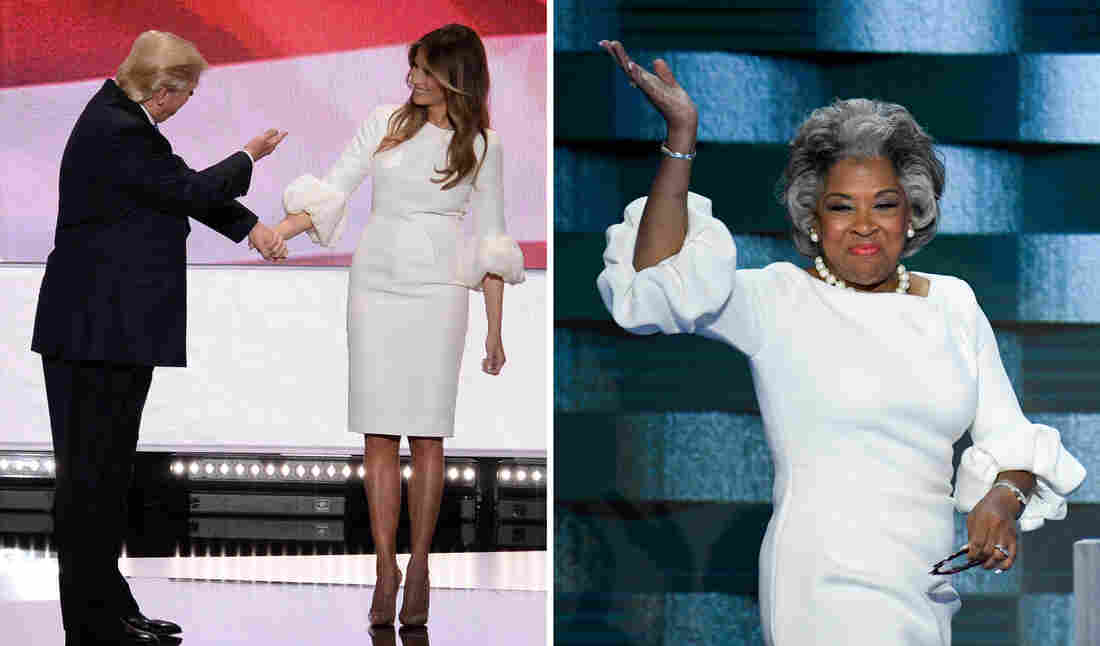 Elizabeth Banks, Lena Dunham, Eva Longoria and Jill Biden each staked her territory in the white department, too.

At the RNC, Donald Trump's daughter Ivanka wore a dress that wasn't quite white, but it's worth talking about because she tweeted about her look, linking to a similar dress from her clothing line, on sale at Macy's.

This, friend, was an opportunity.

Ivanka's entrepreneurial spirit also came through in her speech introducing her father, during which she advocated for working mothers, saying her father "will focus on making quality child care affordable and accessible for all," a topic she will be writing about in her forthcoming book. Also, CAN WE TALK ABOUT THE SUBTLE BREEZE? Wisps of hair blew gently around her as she spoke. Brilliant.

Donald Trump also has a fashion line — the Donald J. Trump Collection — but it's not clear if he wears the stuff himself. In his book, Trump: Think Like a Billionaire: Everything You Need to Know about Success, Real Estate, and Life, the candidate cites Brioni suits as his favorite, Town and Country reports. Whatever The Donald chooses to wear, his clothing line has been the source of some controversy. For all his rhetoric about China and trade, much of the Trump Collection is manufactured abroad. When confronted with that fact, Trump incorrectly responded that clothing items such as his are not made in the U.S., according to FactCheck.org.

We cannot confirm whether Trump wears his line, but it appears that Donald Jr. does, based on a search of ties from the collection's website. Son Eric's tie could be part of the collection, too. The young men broke ranks with their color scheme, and, as The Atlantic noted in its live blog, Eric sported a "very un-Trumplike four-in-hand tie knot." 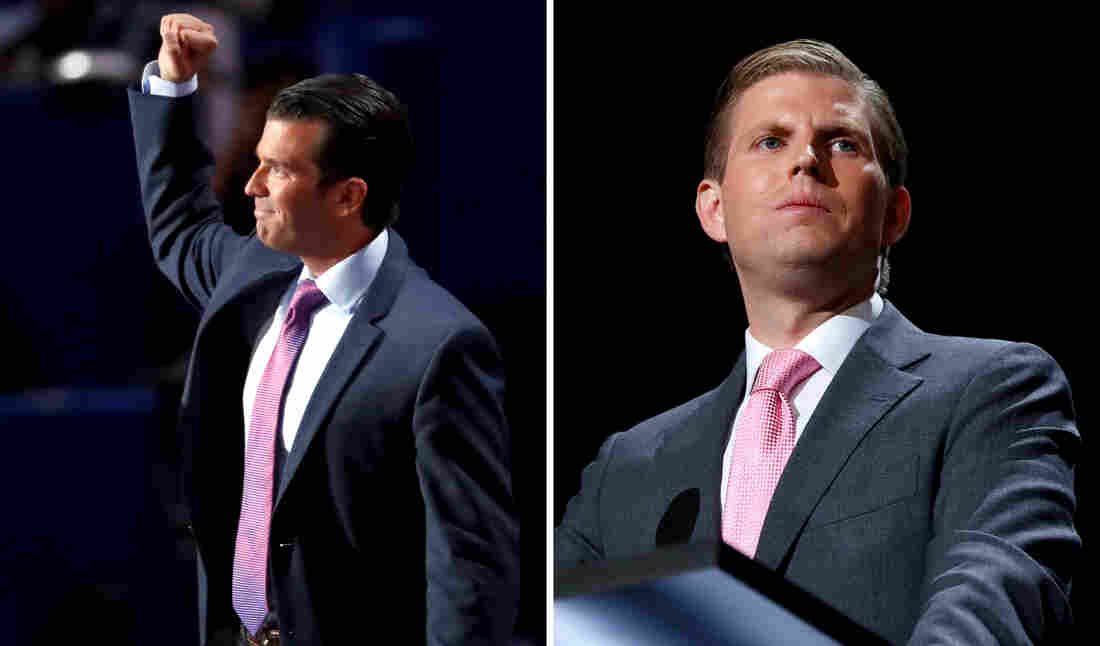 For his acceptance speech, the Republican presidential nominee stood before an image of dozens of American flags and sported a bold red tie. The look matched the tone of his remarks, filled with urgency and "law and order." 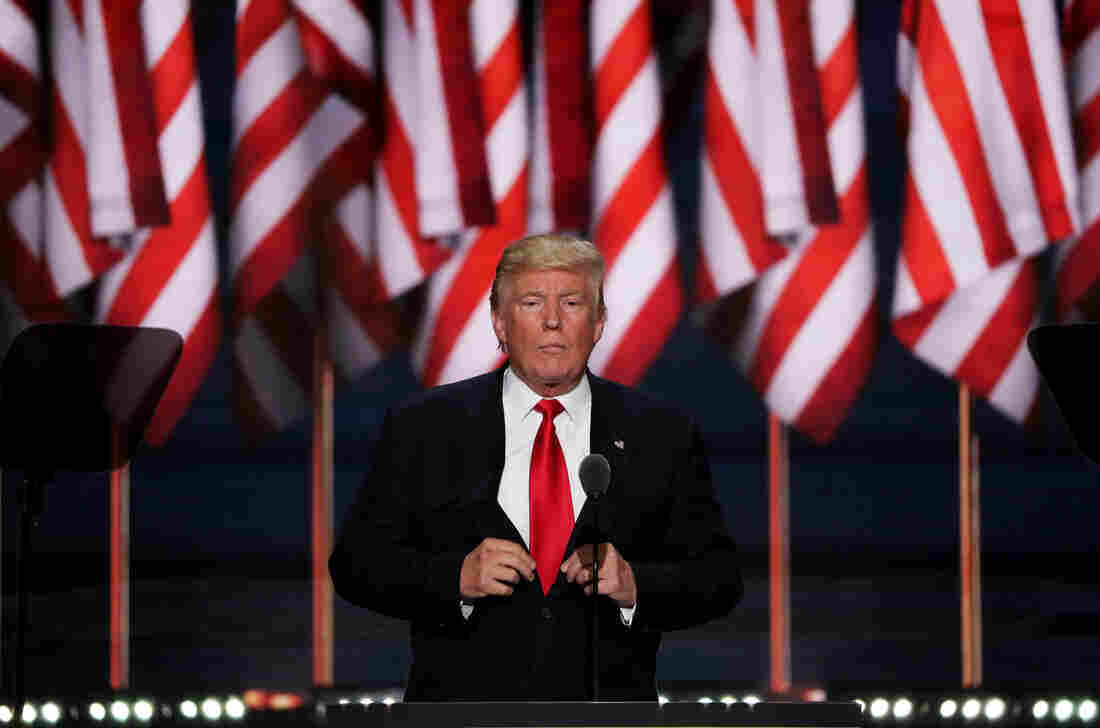 At the DNC, Massachusetts Sen. Elizabeth Warren wore a bold red blazer. Often the target of Trump's name-calling, Warren responded with a passion that complemented her color (watch the video here). Matching Warren's fire — and her red top — was former Michigan Gov. Jennifer Granholm, who also gave a "high energy" speech in 2012.

Republican Jennifer Pierotti Lim may have turned against her party's nominee, but she stayed true to its traditional color, wearing red for her DNC appearance to endorse Hillary Clinton. 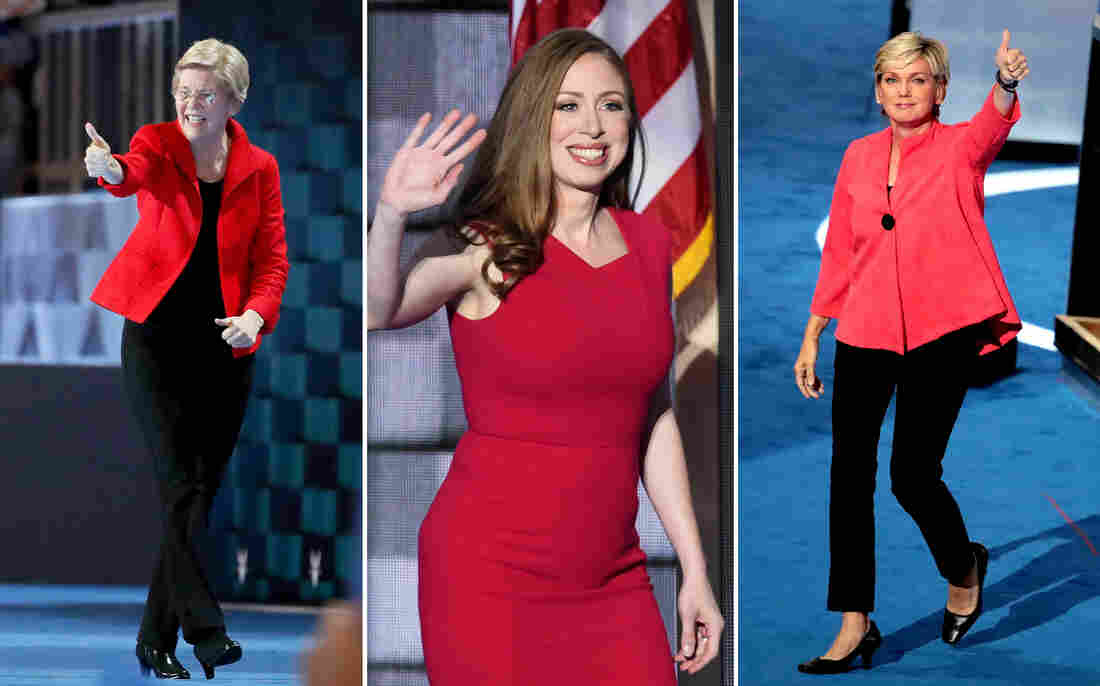 Chelsea Clinton also stood strong in red on Thursday night, delivering an emotional speech about Hillary Clinton being her role model as a mother and a public servant.

Much was said about Bill Clinton's blue "pantsuit" during his headlining night earlier in the week. Here's how Quartz put it: "Bill's stately-but-approachable appearance and middle-of-the-road fashion choices make him a terrific candidate for the supporting role of first spouse of the United States. (He was also the 42nd president of the United States.)" 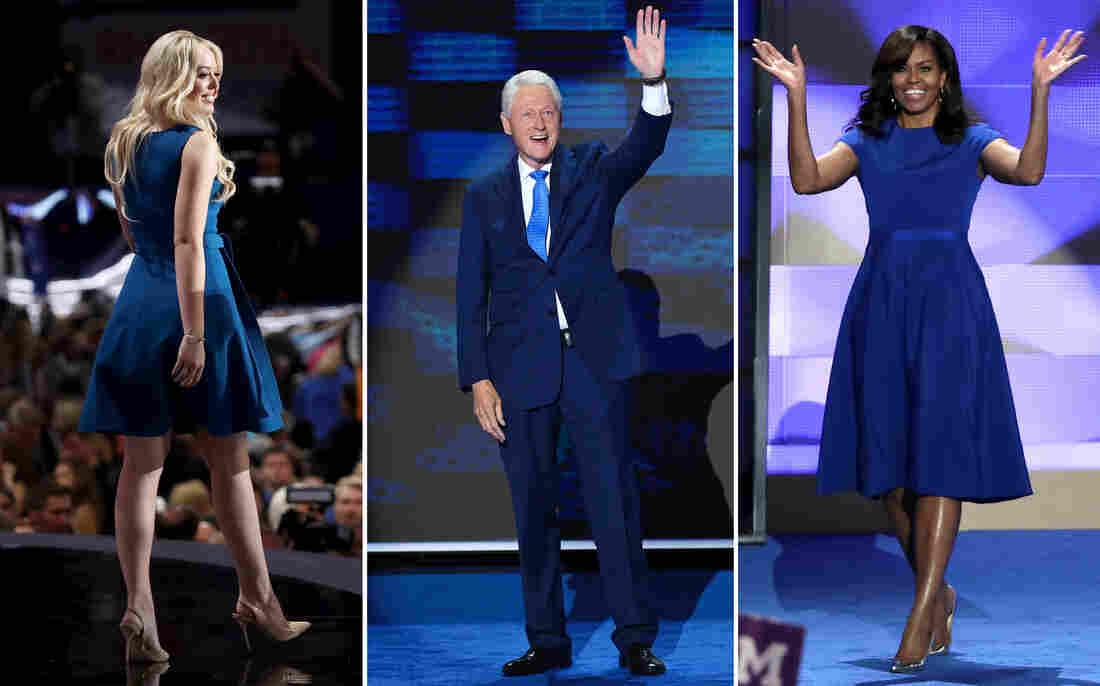 Michelle Obama, often lauded for her sharp fashion sense, made a statement perhaps by not wearing something flashy. A deep-blue Christian Siriano dress designed just for her, The New York Times reports, seemed to hold Obama above the fray, matching the strength and frankness of her speech.

Tiffany Trump, who wore a similar blue, notably described a personal side of her father that went beyond the politics and policy mentioned in her siblings' speeches.

Former Secretary of State Madeleine Albright, who told NPR it was "almost too hard" to express her excitement about Hillary Clinton's nomination, also chose a stately blue. But it was her brooch that captured attention. A beautiful, big, bold eagle — exceedingly patriotic — a message she no doubt intended (she uses jewelry to emphasize her points, she says).

Clinton's running mate, Virginia Sen. Tim Kaine, sent a message with a pin of his own (though you'll be forgiven for missing it — it is far less sparkly). He wore a Blue Star Service lapel pin to honor his son, whom he mentioned in his speech, a Marine who deployed to Europe this week. 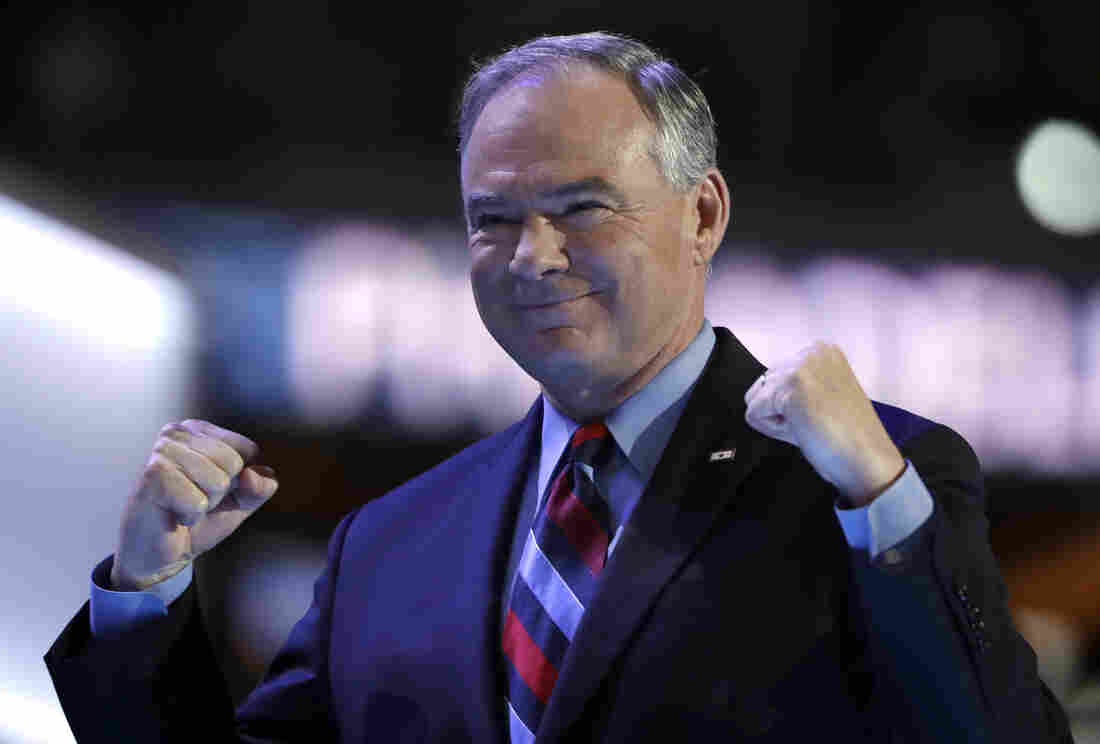 Democratic vice presidential candidate Virginia Sen. Tim Kaine skipped the white and went for a blue shirt with a striped tie for his speech on Wednesday. Matt Rourke/AP hide caption

The North Carolina GOP mistakenly tweeted that the pin was the Honduran flag and called such a display "shameful," according to The Hill. Kaine is quick to mention his time in Honduras volunteering with Jesuit missionaries, where he learned Spanish (though one could debate how much that will persuade Latino voters). For the record, this is not what the Honduran flag looks like. This is. The Hill says the state party's tweet has since been deleted, and it has apologized for the error.

We would be remiss if we did not mention perhaps the most patriotic dress of them all: Meryl Streep's. No subtlety to decipher here: The dress is covered in American flags. The Internet/Vanity Fair discovered that Streep also wore the dress in 2009 for the opening of her film Doubt — and for an unknown number of Fourth of July picnics. Ms. Streep, we salute you. 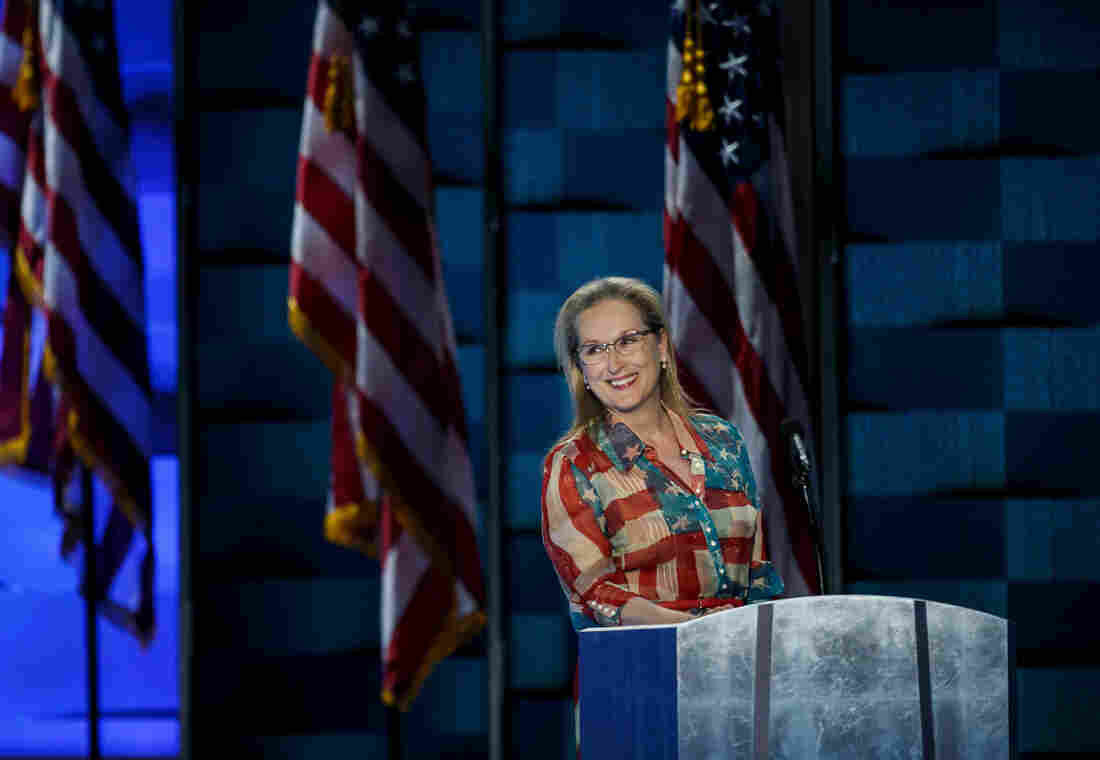 Actress Meryl Streep in what is quite possibly the most patriotic outfit of both conventions. Marcus Yam/LA Times via Getty Images hide caption