Accessibility links
'Meat Cake Bible' Is Packed With Frills, Chills And ... Pez? Graphic artist, fortuneteller, musician and mischief maker Dame Darcy published the comic Meat Cake from 1993 to 2008. This new compilation is packed full of all the things that obsessed her.

'Meat Cake Bible' Is Packed With Frills, Chills And ... Pez?

'Meat Cake Bible' Is Packed With Frills, Chills And ... Pez? 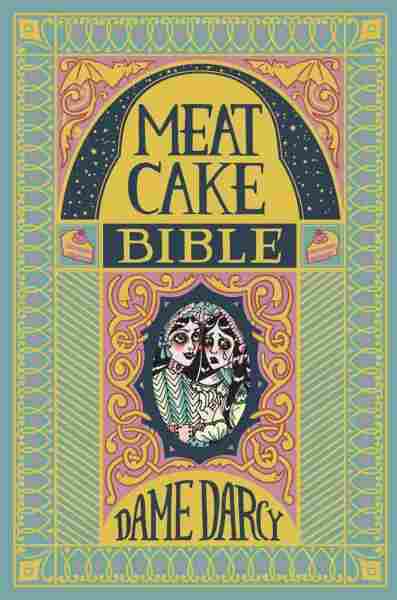 The free-floating, perverse mischief of Dame Darcy — graphic artist, musician, fortuneteller and worldmaker extraordinaire — is on display in the title of her big new book. Meat Cake Bible isn't the same book it would be if it were called The Meat Cake Bible. The latter would be a straightforward thing: Simply, a collection of the comic Dame Darcy published from 1993-2008. Take away the "the," though, and Meat Cake Bible can be read as "Meat, Cake, Bible!" — a parade of potent delicacies, possibly a children's chant. Or it could be "Meat. Cake. Bible." That has a ritualistic sound, like a recital of some occult philosophy.

That's perfect for an artist whose vision is as weird as it is engulfing. Meat Cake helped set the aesthetic tone of the hothouse 1990s zine scene, with countless self-publishers dipping into Dame Darcy's grab bag of obsessions: death, retro femininity, pirates, circus freaks, vintage fashion (in her case, a lust for ensembles from Victorian times through the 1920s) and, under it all, a sense of irony as dry as the Gobi.

Also, there was Pez. Remember that candy? Plenty of zinesters latched onto Pez dispensers as a kitsch symbol, but only Darcy created a human Pez dispenser — a character who, ghoulishly, extrudes the stuff from a bleeding gash in her neck. She's called Strega Pez. Then there are conjoined twins Hindrance and Perfidia, Effluvia the mermaid and a beautiful blonde girl called Richard Dirt. The ladies poison, shoot and stab each other, steal each other's dolls, dig up graves to wear the corpses' dresses to a party, swallow swords, knit, and go on picnics.

The compositions are chaotic, the rules of human anatomy are treated with breathtaking carelessness and the drawings shift from poised to scribbly from panel to panel — and even within panels. But it's all part of the plan.

The dizzying effect of these antics is heightened by Dame Darcy's freaky, virtuosic artwork. At first glance almost every page seems to seethe. The compositions are chaotic, the rules of human anatomy are treated with breathtaking carelessness and the drawings shift from poised to scribbly from panel to panel — and even within panels. But it's all part of the plan. The Dame's skill is clear when she draws a set piece like an undersea scene or a nineteenth-century morgue. When she switches between styles — as she does adroitly in "Hungry is the Heart," a collaboration with Alan Moore — it's to keep the reader off-balance.

The one thing Dame Darcy doesn't do in this sprawling book is evolve. In 2008, Richard Dirt and her friends are still getting up to the same hijinks they were in 1993. Darcy herself seems to tire of her own shtick: The final issues of Meat Cake include a knitting lesson and a recipe for hummus. Even Effluvia is over it. "Sailors down, ship sunk by siren song," she reads from the newspaper. "How boring, this always happens."

But however static Dame Darcy's world, within that world she can be relied on to provide engaging, unsettling delectations. That's saying something, considering that all her favorite themes have become mainstream over the past couple of decades. Neo-Victorian ensembles, whether goth or steampunk, are paraded at every fan convention — not to mention on the runways of Gucci, Rochas and Rodarte. Arch creepiness is the order of the day on American Horror Story and in Pride and Prejudice and Zombies. The former even had a whole season set at a freak show. In literature, "there has been a vogue in the last 25 years for the 'neo-Victorian novel,'" writes author Charles Palliser in the Guardian. "It lets the writer exploit [a] cozy/menacing ambivalence."

Replace "cozy" with "girly," and you've got a pretty good description of Dame Darcy. Her imagery and style may have caught on in the wide world, but the originals are as menacing as ever.