Accessibility links
Trump Responds To Slain Soldier's Father, Who Appeals To GOP Leaders Khizr Khan gave an emotional speech at the DNC in Philadelphia. Donald Trump accused Khan of being scripted by the Clinton campaign and wondered if Ghazala Khan was unable to speak for herself. 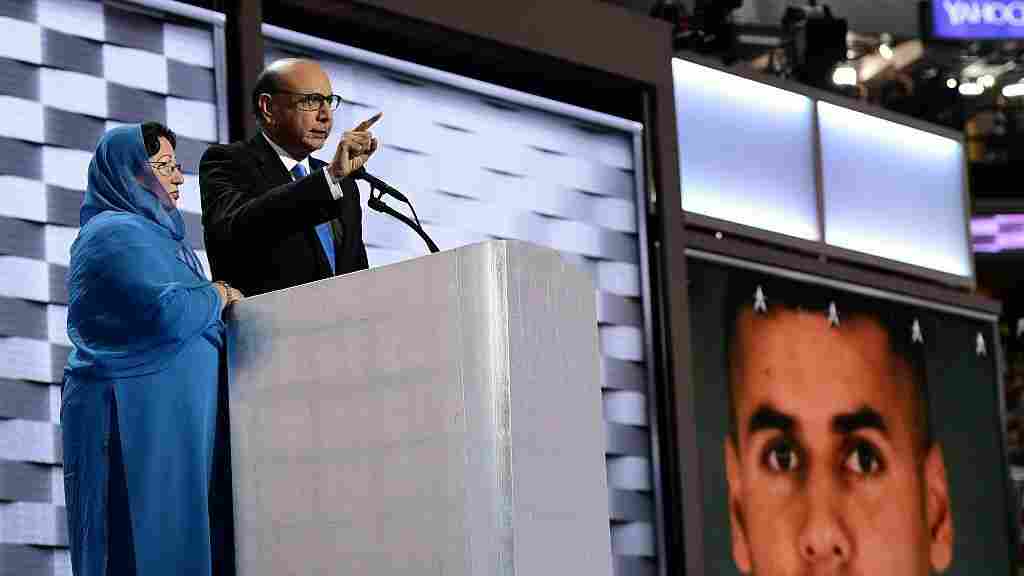 Khizr Khan, whose son was killed in Iraq, speaks directly to Donald Trump at the Democratic National Convention in Philadelphia on Thursday. His wife Ghazala Khan stands beside him. Robyn Beck/AFP/Getty Images hide caption 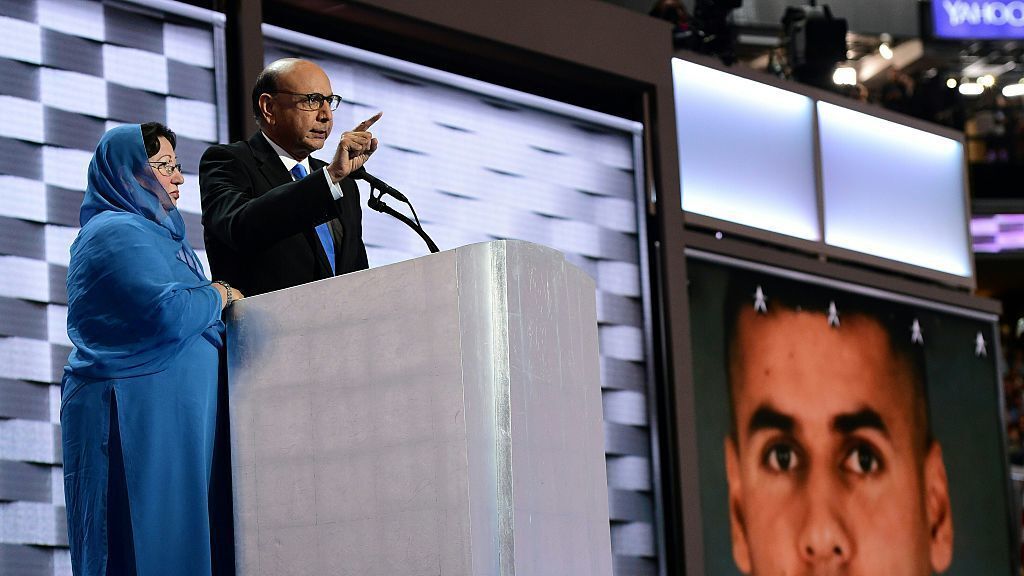 Khizr Khan, whose son was killed in Iraq, speaks directly to Donald Trump at the Democratic National Convention in Philadelphia on Thursday. His wife Ghazala Khan stands beside him.

Updated at 6:30 p.m. ET with a reaction from Hillary Clinton provided by her campaign.

In one of the most powerful moments at the Democratic National Convention, a Muslim father of a fallen U.S. soldier took the stage with his wife beside him and spoke directly to Donald Trump.

That father, Khizr Khan, condemned the Republican presidential nominee for proposing a ban on Muslims entering the United States.

"Let me ask you, have you even read the United States Constitution? I will gladly lend you my copy," he asked Trump, pulling a copy of the document out of his suit coat. "Look for the words 'liberty' and 'equal protection of law.'"

Khan's son, Humayun Khan, was an Army captain. In 2004, the 27-year-old was killed by a suicide bomber in Iraq after having warned his fellow soldiers to stand back. He was awarded the Bronze Star and Purple Heart posthumously.

Khan told Trump that Arlington cemetery is filled with soldiers of "all faiths, genders and ethnicities."

"You have sacrificed nothing and no one," Khan said.

In an interview with New York Times columnist Maureen Dowd Friday night, Trump didn't zero in on Khan's accusations but rather on his wife, Ghazala Khan, who stood beside her husband silently. His response to Dowd was brief.

"I'd like to hear his wife say something," Trump said.

Trump expanded on that sentiment in an interview with ABC News Saturday.

There comes a time in the history of a nation where an ethical, moral stand has to be taken regardless of the political cost.

Khizr Khan, in a plea to Paul Ryan and Mitch McConnell

"If you look at his wife, she was standing there," Trump said. "Maybe she wasn't allowed to have anything to say, you tell me."

In an interview on MSNBC the previous night, Ghazala Khan explained why she chose to remain silent on stage.

"I cannot see my son's picture. I cannot even come in the room where his pictures are," she said. "That's why when I saw the picture on my back, I couldn't take it and I controlled myself at that time. So, it is very hard."

Her husband added that she served as his "coach" while writing the speech and said she gave him the strength to speak on stage.

"Forty years of marriage has brought us in a position where we are strength for one another," Khan said. "Her being there was the strength so I could hold my composure. I am much weaker than she is in such matters."

In a statement this afternoon, Hillary Clinton said:

Khizr Khan, in his comments to MSNBC, added that his remarks at the DNC were "only half of the speech." The other half, he said, is for Senate Majority Leader Mitch McConnell and House Speaker Paul Ryan.

"There is so much at stake and I appeal to both of those leaders, this is the time," Khan said. "There comes a time in the history of a nation where an ethical, moral stand has to be taken regardless of the political cost."

He added that no one has been able to convince Trump otherwise on his views of Muslims and other immigrants.

In that Saturday ABC News interview, Trump was also asked to respond to Khizr Khan's assertion that Trump has sacrificed nothing. The GOP nominee first asked if Clinton's speech writers scripted Khan's remarks (Khan has claimed to have rejected such help), then said, "I think I've made a lot of sacrifices. I work very, very hard. I've created thousands and thousands of jobs."

He added that he, along with others, was "very responsible" for getting the New York City Vietnam Veterans Memorial built. According to the Washington Post, Trump attended only a few of the 20 planning meetings for the memorial.

Trump's views on Muslims also remain unchanged. When asked how he would respond to Khan in general, he said:

"We've had a lot of problems with radical Islamic terrorism, that's what I'd say."