Accessibility links
Marriage And Motherhood Are A 'Source Of Power,' Says Comic Ali Wong Wong was 7 1/2 months pregnant when she filmed her first comedy special, Baby Cobra. She says that the birth of her daughter changed her career for the better. 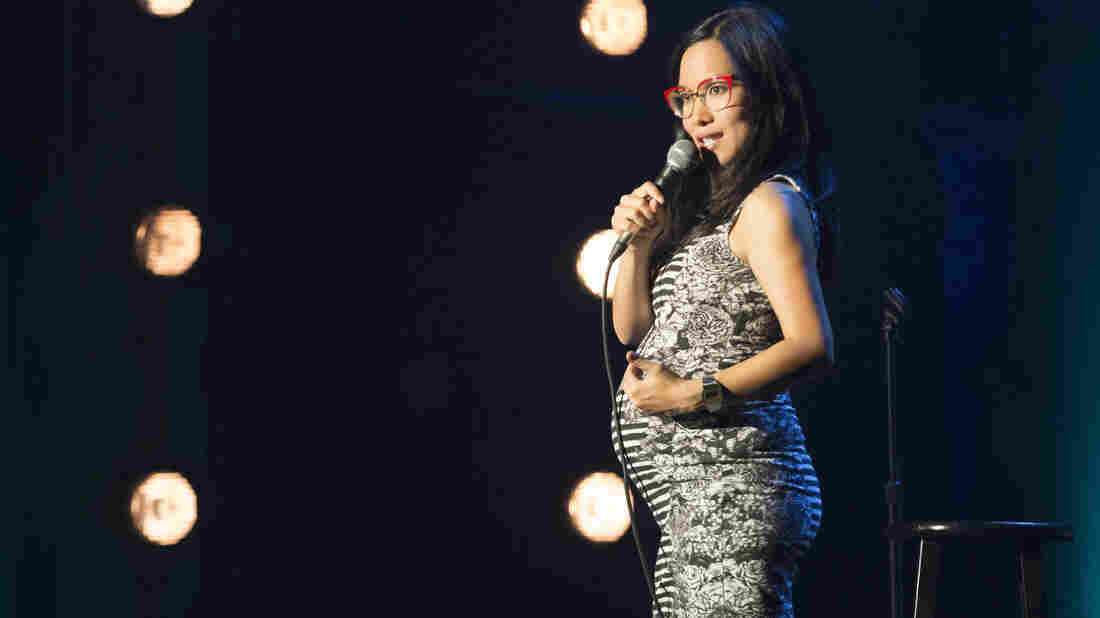 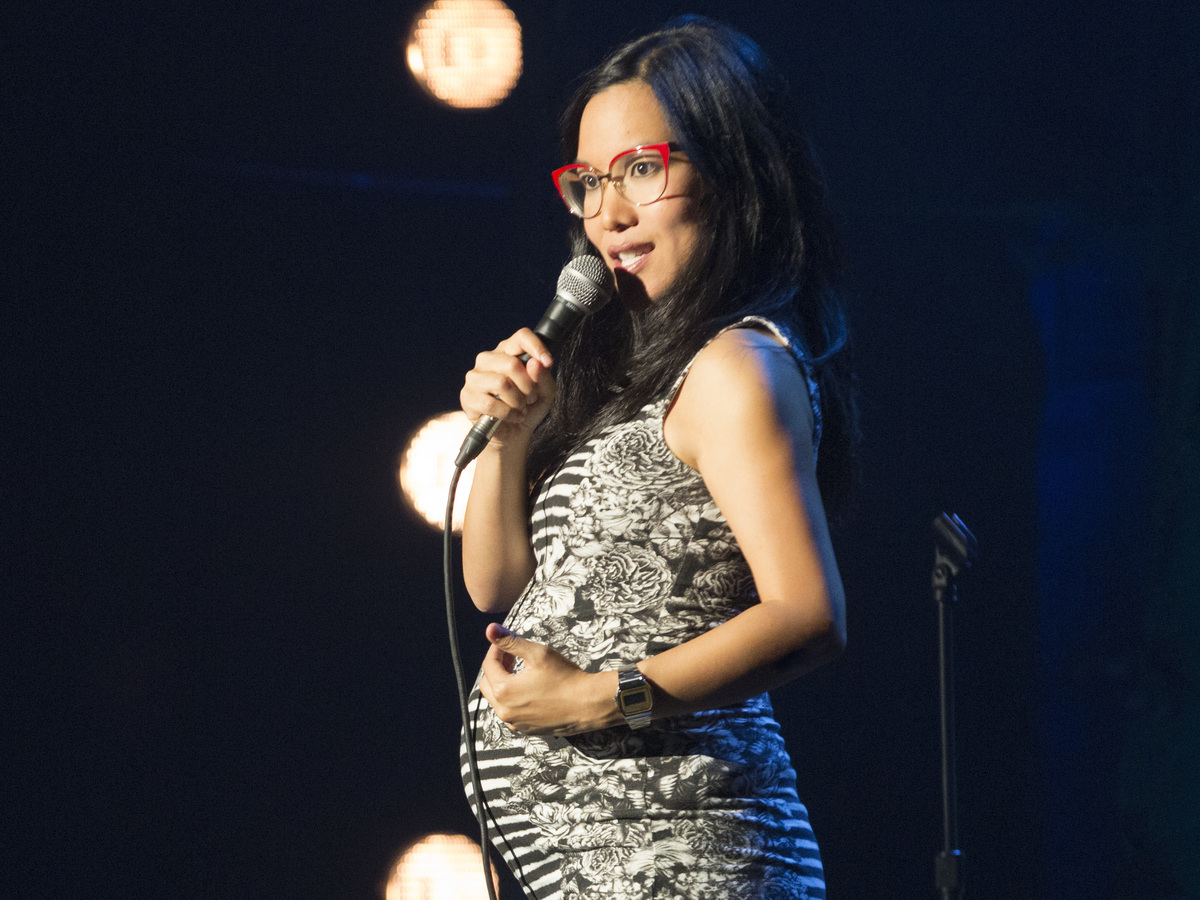 Comedian Ali Wong is so committed to her work that she estimates that she performed on stage almost every day for 11 years before her daughter was born. In fact, she was 7 1/2 months pregnant when she filmed her first comedy special, Baby Cobra, for Netflix.

Wong tells Fresh Air's Ann Marie Baldonado that she feared that getting pregnant and having a baby would make her disappear from the stand-up scene. "[Stand-up is] an art form where you have to really go up every single night, and it's not very forgiving if you take a break," she says. "If you skip a week you really revert, you get worse."

In Baby Cobra, Wong speaks frankly about sensitive topics, including prejudice within the Asian-American community, interracial dating and her own miscarriage. She says her decision to film the special while pregnant was a personal one.

"I had all this anxiety about how the baby would change my career," Wong says. "I wanted to associate her with changing it for the better, and she absolutely has."

On balancing motherhood with the demands of stand-up

I've seen many female comics that a lot of people haven't heard of who are so funny, and I saw them come up and they were working so hard, and then all of a sudden they had a baby and they just got tied up in motherhood and eventually they kind of just stopped doing stand-up, and I thought it was such a shame.

Even now when I go out people are like, "What are you doing here? Didn't you just have a baby?" But people never ask a male comic when he's out a week later, like, "Oh my god, you're so irresponsible! What are you doing out? Who is taking care of the baby?" ...

In giving birth, I knew that I would have to take a break after I had a baby, I just didn't know that it would be, like, six weeks long. Taking a six week break was a very big deal for me. I have never taken that long of a break from stand-up other than my honeymoon, which was 14 days long.

On getting encouragement from comedian Chris Rock

What was really encouraging was I had a talk with Chris Rock about getting married and having kids, and I expressed to him that I was really anxious about it, and I was really worried about how it would affect my career, and he said to me, "You know what Ali? I think that if you do get married and have kids, that you will actually have a real shot at being truly famous, and I'm talking about the kind of famous where your mother knows who you are ... like a mother, like a household name. ... because most of America is married and has kids."

And that really changed my perspective, because then it was kind of the beginning of me thinking about how to use my marriage and my pregnancy as — not a source of downfall and weakness — but instead as a source of power and relatability.

On working on new material since the baby has been born

I could go on and on and on about breastfeeding. I thought it was supposed to be this beautiful bonding ceremony, where I would feel like I was sitting on a lily pad in a meadow and bunnies would gather at my feet. ...

But really it's like this savage ritual that just reminds you that all of us, we're nothing but mammals. We ain't special. You know? When she gets hungry, my baby girl, she yanks my nipple back and forth like that bear effing up Leonardo DiCaprio in The Revenant. It's frightening.

My perspective has changed about my body and sex, a lot. It can't help but change, because your body has gone through the most drastic transformation in the world.

When I was breastfeeding and I got a clogged duct, ... that's when you get, like, a traffic jam on the 405 in your breast, and you have to call a white hippie witch, a lactation consultant, to come over to your house ... [who] you pay, like, $200 to behave like the Wolf from Pulp Fiction, who tells you to gather, like, a bowl of hot water and a towel and a fresh diaper, telling you to gather all this stuff, and she had me on my hands and knees dipping my boob in and out of a bowl of hot water, and then punching my breast with a fist. I was like, "This is ridiculous. I can't be doing this at work."

And then my body, how is my husband supposed to see me as a sexual being anymore when he sees all this going on? ... My perspective has changed about my body and sex, a lot. It can't help but change, because your body has gone through the most drastic transformation in the world.

On joking about different kinds of Asians — as she puts it in her comedy special, "fancy Asians" — Japanese and Chinese — and "jungle Asians" — Vietnamese and Filipinos

My husband and I went to Japan for our honeymoon, and you look at, like, the presentation of the food and it's ridiculous. It looks like a Mondrian painting, or something. Everything looks like a bunch of little Hello Kitty erasers when you eat a little bento box in Japan. It's so precise and beautiful and processed and neat.

Some of my Japanese American friends will see me going to town on a bowl of pigs feet and they'll be like, "Oh my god, you jungle Asian." It's like, "We're the same! I'm not supposed to feel bad about what I'm eating in front of you guys, but I do!" Because it's different, you know?

With my husband, I do really appreciate the fact that we, even though we're different kinds of Asian, there is a cultural shorthand between us and I don't have to explain anything. I've dated guys before who weren't Asian-American and it frustrated me when I would have to defend why beans belong in a dessert.