Accessibility links
What Would Donald Trump's Department Of Justice Look Like? Some Justice Department veterans said they worry about the possibility of political interference in law enforcement decisions if Trump wins the White House. 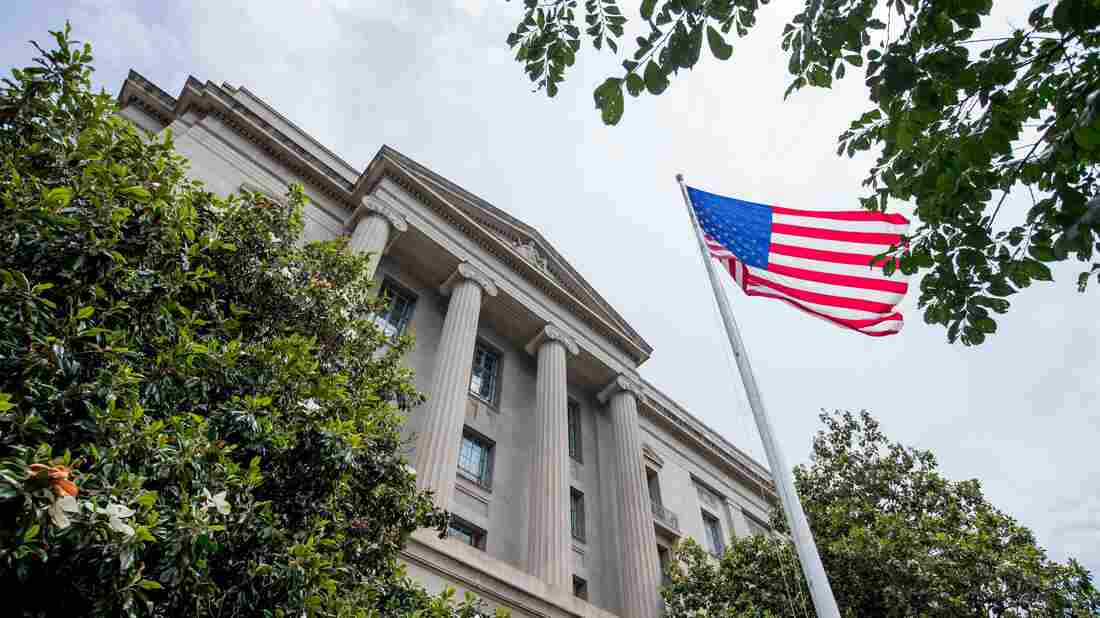 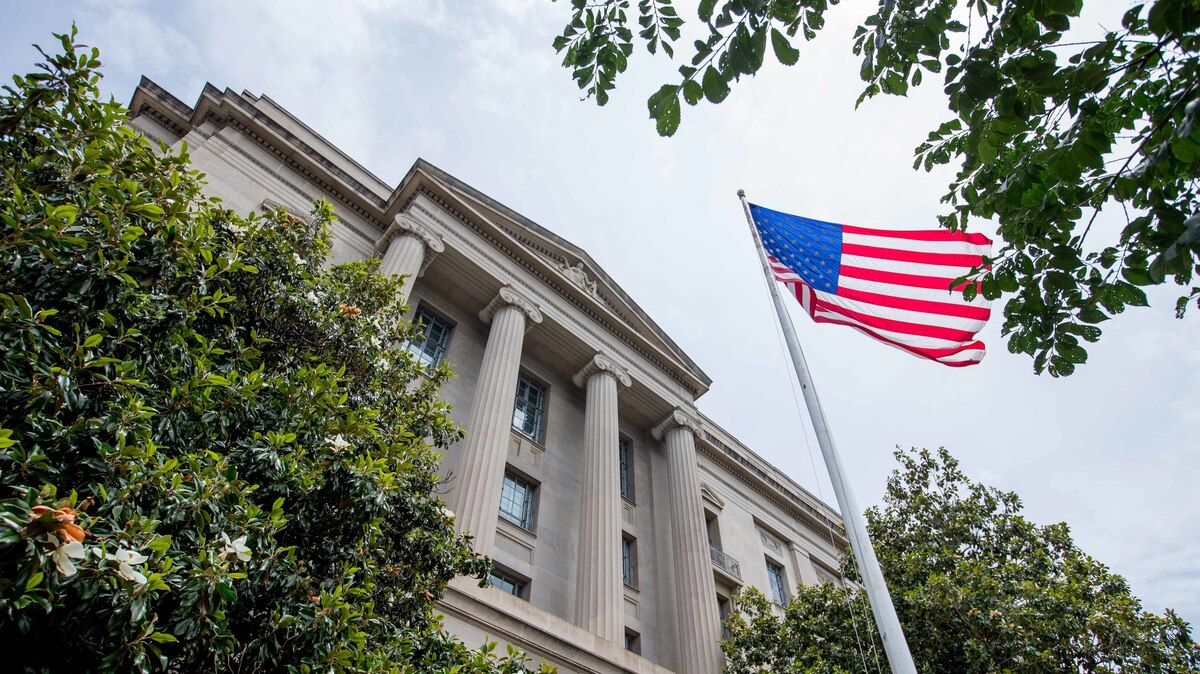 The Department of Justice has broad-ranging powers to decide who gets prosecuted with the full weight of the federal government. And some of the rhetoric used on the campaign trail this year, especially by Republican presidential nominee Donald Trump, worries some department veterans about the possibility of major political interference in law enforcement by the next administration.

"I think his campaign has demonstrated that he has the intent actually to potentially improperly influence judicial or prosecutorial matters," said Carrie Cordero, who worked as a career national security lawyer in the department.

Cordero said she's bothered by Trump's repeated attacks on the Mexican heritage and alleged bias of a judge hearing a civil fraud case against Trump University. Other Justice Department analysts said Trump may have crossed another line last May, when he used an appearance on Fox News to single out Jeff Bezos, the owner of the Washington Post, for possible scrutiny of antitrust and tax issues at his Web retailer Amazon after the Post published negative stories about him.

Trump Presses Case That 'Mexican' Judge Curiel Is Biased Against Him

Cordero also cited statements by Trump associates calling for his political opponent to face criminal charges. The Justice Department announced last month it would file no criminal charges against Democrat Hillary Clinton or her aides after the FBI director concluded "no reasonable prosecutor" would bring such a case based on the facts and the law. 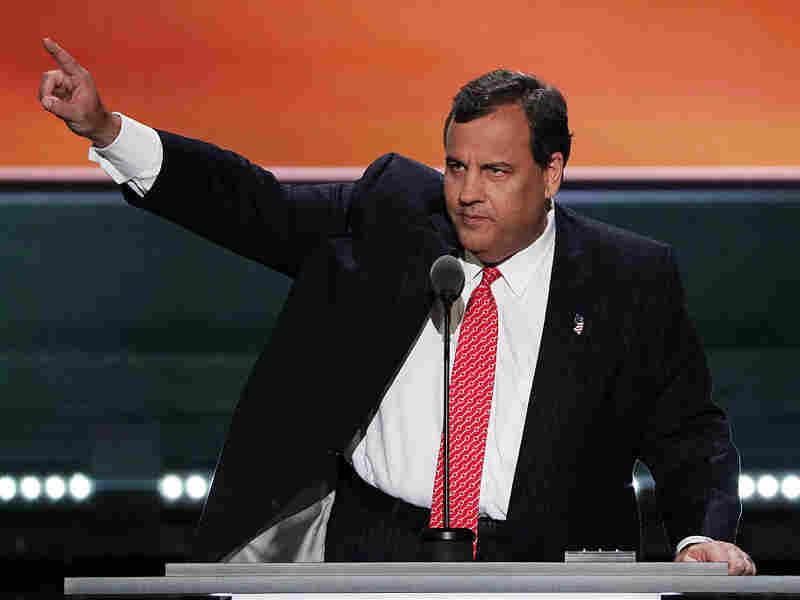 In his July 19 speech at the Republican National Convention in Cleveland, New Jersey Gov. Chris Christie gave a speech asking the audience to give "verdicts" on Hillary Clinton. Alex Wong/Getty Images hide caption 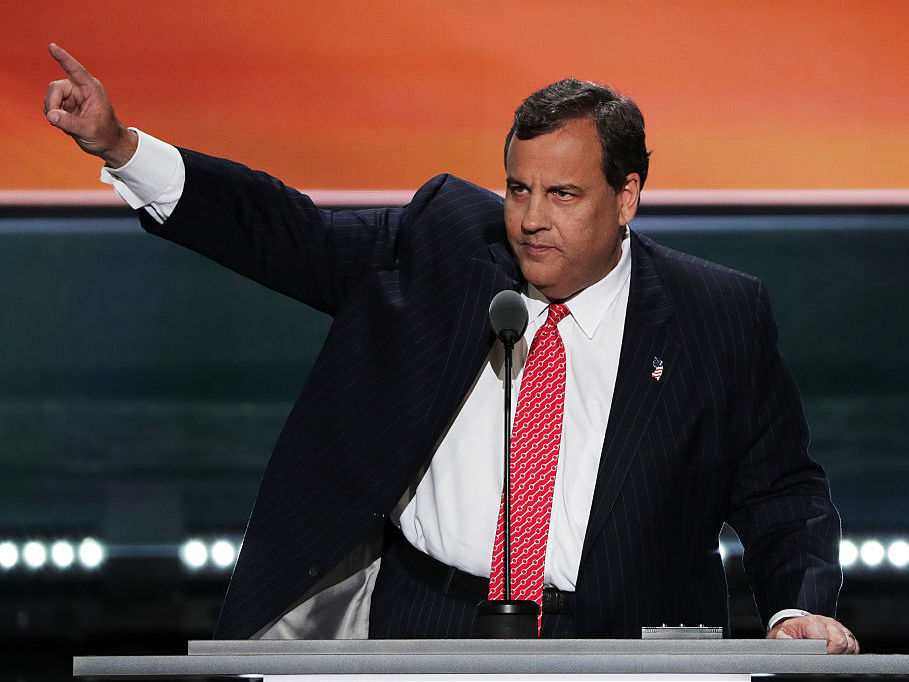 In his July 19 speech at the Republican National Convention in Cleveland, New Jersey Gov. Chris Christie gave a speech asking the audience to give "verdicts" on Hillary Clinton.

But that decision remains unpopular with many Republicans at last month's convention. New Jersey's Republican governor, Chris Christie, who's playing a big role in the Trump campaign, used his speech there to build a case against Clinton.

"We cannot make the chief law enforcement officer of the United States someone who has risked America's secrets and lied to the American people about it day after day after day," said Christie, a former federal prosecutor, before asking the crowd to render a decision.

"What's your verdict, guilty or not guilty?" Christie continued. "Guilty," the crowd roared.

The wall between politics and prosecutions

Decisions to bring criminal charges are supposed to be insulated from politics at the Department of Justice so that no one with improper motives uses law enforcement for his or her own ends.

"The most awesome power that the federal government has over the day-to-day lives of people is not through the intelligence community and is not through the military. It's through the Department of Justice," said Benjamin Wittes, a senior fellow at the Brookings Institution who closely follows the agency and edits the website Lawfare.

Wittes said the "tremendous" sweep of the federal prosecutor is not a new idea. In fact, he pointed out, former Attorney General Robert H. Jackson first addressed the topic in the Justice Department's Great Hall in April 1940.

Since there are so many laws on the books, and not enough investigators to sort through all of the allegations of wrongdoing, Jackson said where authorities choose to train their limited resources matters a great deal.

Benjamin Wittes, a scholar at the Brookings Institution

"Therein is the most dangerous power of the prosecutor: that he will pick people he thinks he should get, rather than pick cases that need to be prosecuted," he added.

The bottom line is, a lot of justice is about judgment. And history suggests people in the White House haven't always respected those lines.

In October 1973, then-President Richard Nixon built momentum for his own impeachment when he fired special Watergate prosecutor Archibald Cox in the notorious "Saturday Night Massacre." People from across the nation sent a flood of supportive telegrams, urging lawyers and investigators to continue digging into misconduct by the president and his allies.

Eventually, a new attorney general imposed limits on contacts between the White House and the Justice Department. Those limits mostly stood intact for 30 years. Then, a new controversy emerged: the Inspector General concluded that department officials in the George W. Bush administration had repeatedly and improperly used a "political litmus test" to hire prosecutors and judges for nonpartisan, career posts.

As happened a generation before, a new Republican attorney general ultimately took the reins, set out new rules, and steered the Justice Department past the trouble.

Some Republicans worry about a Clinton Justice Department

Republicans who served in the Justice Department said it's ironic to issue dire warnings about a possible Trump administration when Democrats have their own appearance problems separating politics from law enforcement.

They cited a series of campaign finance and public corruption scandals during the administration of former President Bill Clinton, and allegations the Internal Revenue Service targeted conservative groups seeking tax-exempt status during the Obama years. A Justice Department probe of the IRS actions ended with no charges, concluding "poor management is not a crime." Many conservatives remain outraged at that decision.

"I've just watched the current Attorney General, Loretta Lynch, meet with former President Clinton on her plane and in clear violation of the ethics rules not recuse herself from an investigation immediately, not do the right thing," said Mark Corallo, a former spokesman in the Department of Justice during the George W. Bush administration.

Corallo pointed out that just like Trump's business interests, the Clinton family foundation is also a source of intense scrutiny. He said he followed a series of campaign finance investigations into government officials during Bill Clinton's White House years, and he's not eager to return to those days.

Ultimately, Corallo said, there's no chance any Justice Department will be completely free of politics. But he said he's confident people there can filter out their opinions and follow the rule of law, just as they have done for decades.