Accessibility links
Cesar Chavez: The Life Behind A Legacy Of Farm Labor Rights From his earliest days picking peas to improving wages and working conditions as a union leader, Cesar Chavez dedicated his life to giving voice to the exploited men and women who grow America's food. 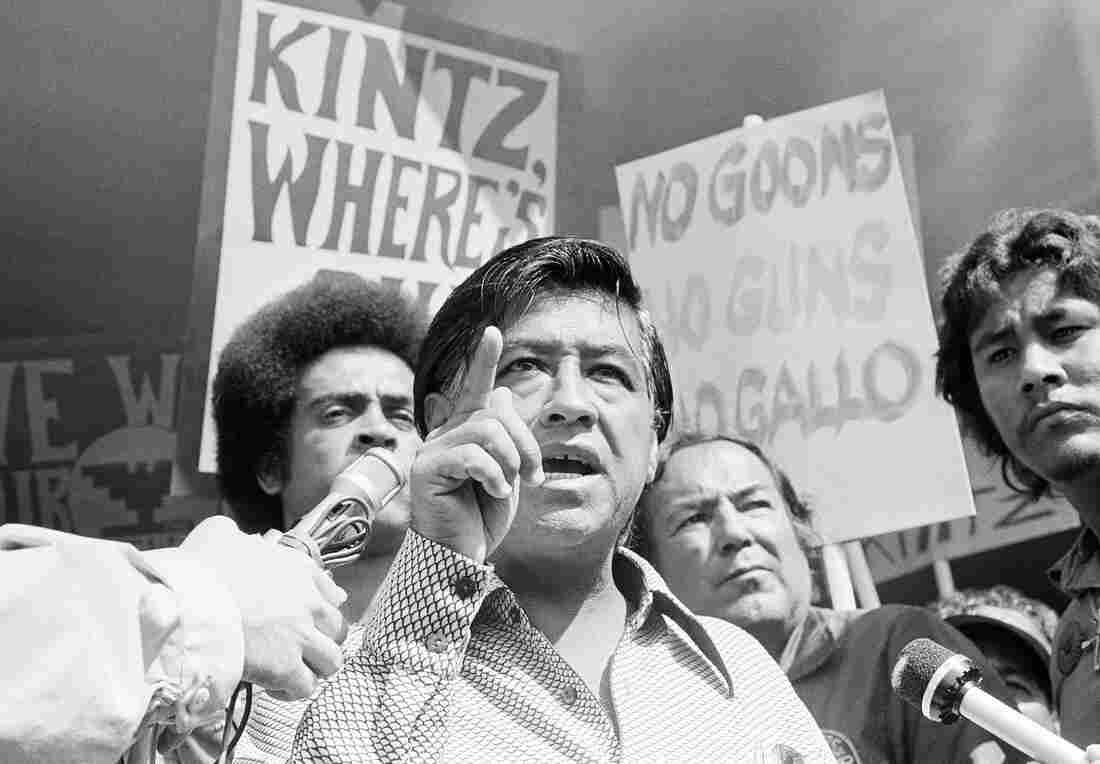 Cesar Chavez, the head of the United Farm Workers Union, calls for the resignation of Walter Kintz, the first legal counsel for the state Agriculture Labor Relations Board, in Sacramento, Calif., on Sept. 16, 1975. Chavez's efforts in California culminated in landmark legislation that protected the rights of the state's farmworkers and created the ALRB. AP hide caption 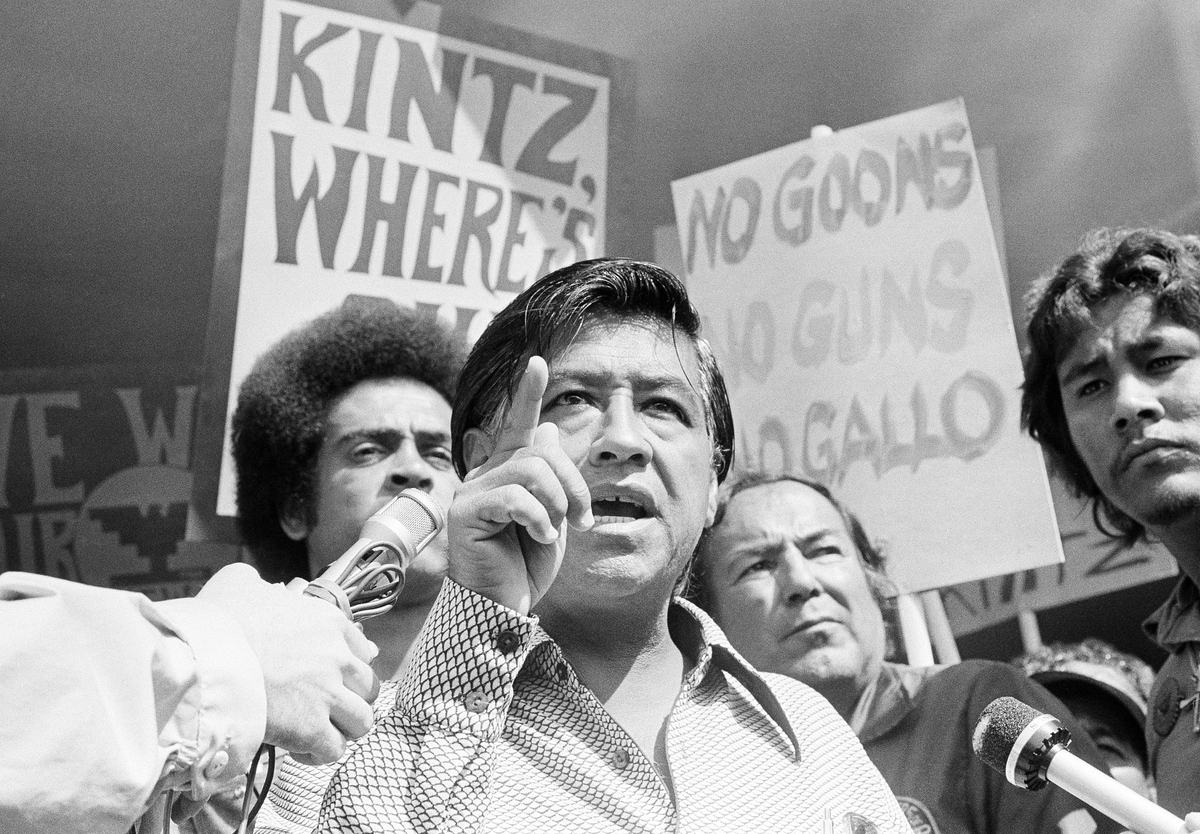 Cesar Chavez, the head of the United Farm Workers Union, calls for the resignation of Walter Kintz, the first legal counsel for the state Agriculture Labor Relations Board, in Sacramento, Calif., on Sept. 16, 1975. Chavez's efforts in California culminated in landmark legislation that protected the rights of the state's farmworkers and created the ALRB.

Half a century ago this summer, labor activist Cesar Chavez joined thousands of striking farmworkers in Texas as they converged on Austin, the state capital, to demand fair wages and humane working conditions.

Their march, which started from the punishing melon fields of South Texas, was his march, too. It was a deep and abiding understanding of the challenges of the farmworker's life that drove his commitment to labor rights. The life of Cesar Chavez mirrored that of the people he was trying to help. Their cause — La Causa — was his.

Born into a Mexican-American family of migrant farm laborers and a life of grinding poverty, Chavez dedicated his life's work to improving conditions for the legions of farmworkers who kept fresh food on the tables across America — while they often went hungry, living and laboring in abysmal conditions and being paid unlivable wages.

"Without a union, the people are always cheated, and they are so innocent," Chavez told The New Yorker's Peter Mathiessen in 1968.

Chavez modeled his methods on the nonviolent civil disobedience of Mahatma Gandhi and Martin Luther King Jr. — employing strikes, boycotts, marches and fasts — to draw attention to La Causa. And he drew inspiration from the social teachings of the Catholic Church and from the life of St. Francis. An Italian nobleman who lived in the 12th and 13th centuries, Francis of Assisi renounced his wealth after a period of captivity during war and illness. He became a champion of the poor, living his life in solidarity with them.

Even in the face of threats and actual violence — be it from police or other unions, such as the Teamsters — Chavez never wavered from his commitment to passive resistance.

At the end of his first fast — which ended in 1968 after 25 days — Chavez was too weak to speak, but a speech was read on his behalf:

"When we are really honest with ourselves, we must admit that our lives are all that really belongs to us. So it is how we use our lives that determines what kind of men we are. It is my deepest belief that only by giving our lives do we find life. I am convinced that the truest act of courage, the strongest act of manliness, is to sacrifice ourselves for others in a totally non-violent struggle for justice. To be a man is to suffer for others. God help us be men."

Chavez's work and that of the United Farm Workers — the union he helped found — succeeded where countless efforts in the previous century had failed: improving pay and working conditions for farm laborers in the 1960s and 1970s, and paving the way for landmark legislation in 1975 that codified and guaranteed agricultural workers' right to unionize, bargain collectively with their employers and vote in secret-ballot elections in California.

Memories Of A Former Migrant Worker

But after these momentous, hard-won victories, the UFW matured as a union, and its influence gradually declined, while the political climate in California turned against labor. Chavez took up a new cause, sounding the alarm over the dangers of pesticides — but never gained the kind of traction of earlier campaigns.

He died in 1993 in Arizona, not too far from where he was born. He was still doing union business, at 66. More than 40,000 people attended his funeral.

"He was for his own people a Moses figure," Clinton said. "The farmworkers who labored in the fields and yearned for respect and self-sufficiency pinned their hopes on this remarkable man, who, with faith and discipline, with soft-spoken humility and amazing inner strength, led a very courageous life. And in so doing, brought dignity to the lives of so many others, and provided for us inspiration for the rest of our nation's history."

Some key moments in his life:

1927: Chavez is born on March 31 in Yuma, Ariz., one of five children. When bank foreclosure forces the family to leave its small farm, the Chavez family joins the some 300,000 men, women and children streaming into California, following the harvest, during the Great Depression.

The work is back-breaking, hard-to-come-by and pays pitifully. For example, two hours of picking peas — in the hot sun, stooped over — yields the entire family 20 cents. They live in overcrowded, primitive housing with no electricity or running water. Sometimes they cram into a tent, or sleep in the rough. Chavez experiences profound discrimination at school — from teachers as well as other students — and drops out after 8th grade to join his family full time in the fields.

1939: Chavez is first exposed to unions in San Jose, Calif., where his family is working at the time.

1946: Joins the U.S. Navy and serves for two years at the end of World War II in a segregated unit. Chavez returns to agricultural work when his service ends.

1948: Meets and marries Helen Fabela in Delano, Calif. They have eight children. He begins learning about Gandhi — who used nonviolent civil disobedience in the fight for India's independence from British rule — and the teachings of St. Francis, who championed the poor.

1952: Starts working for the Community Service Organization, a Latino civil rights group that organized communities around issues such as voter registration, immigration and police abuse. He rises to become the group's national director.

1962: Chavez resigns from the CSO because it won't endorse his proposal to form a farmworkers union. He uses his life savings of $1,200 to form the National Farm Workers Association in Delano.

1965: Chavez criss-crosses California's Imperial and San Joaquin valleys to recruit members. At the time, he is so poor that he sometimes asks for food from the workers he is trying to help.

In September, the NWFA, under the leadership of Chavez and Dolores Huerta, calls for a strike against grape growers, joining the Agricultural Workers Organizing Committee, a Filipino American labor group. At the time, field workers earned as little as 40 cents per hour. 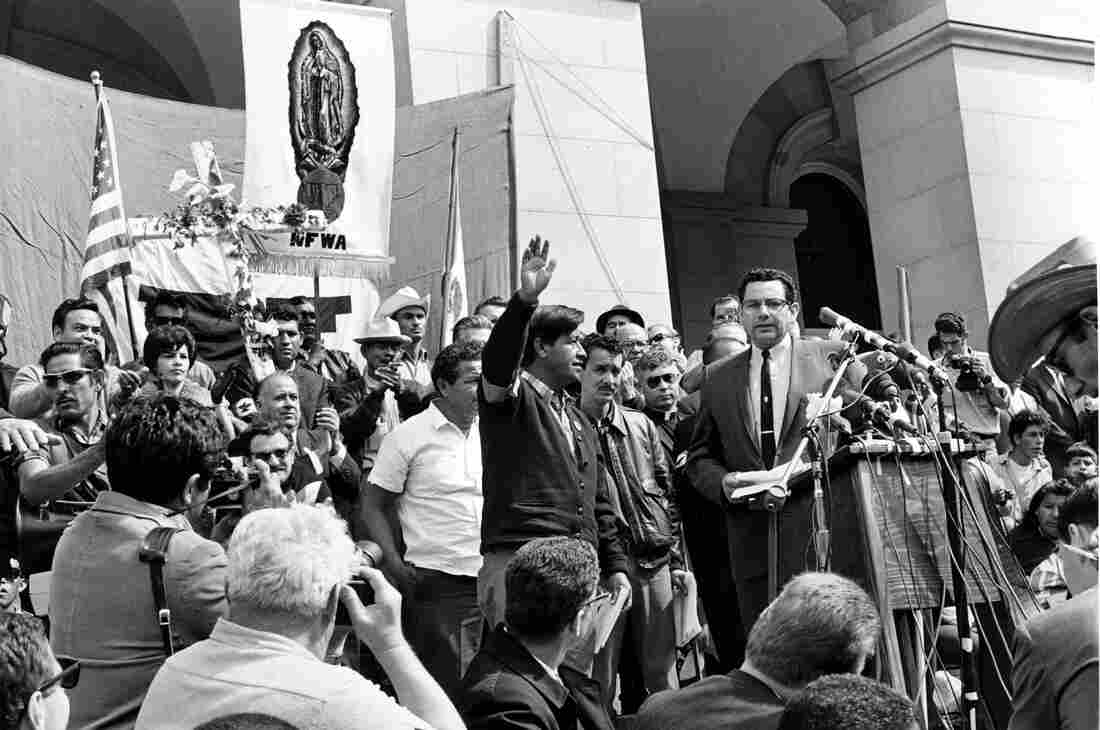 Chavez, leader of the Delano grape pickers' strike, waves to the crowd from the steps of the California Capitol in Sacramento, on April 11, 1966. Chavez led his strikers and followers on a more than 300-mile, 25-day pilgrimage from Delano to Sacramento in an attempt to meet with Gov. Pat Brown on Easter Sunday. AP hide caption 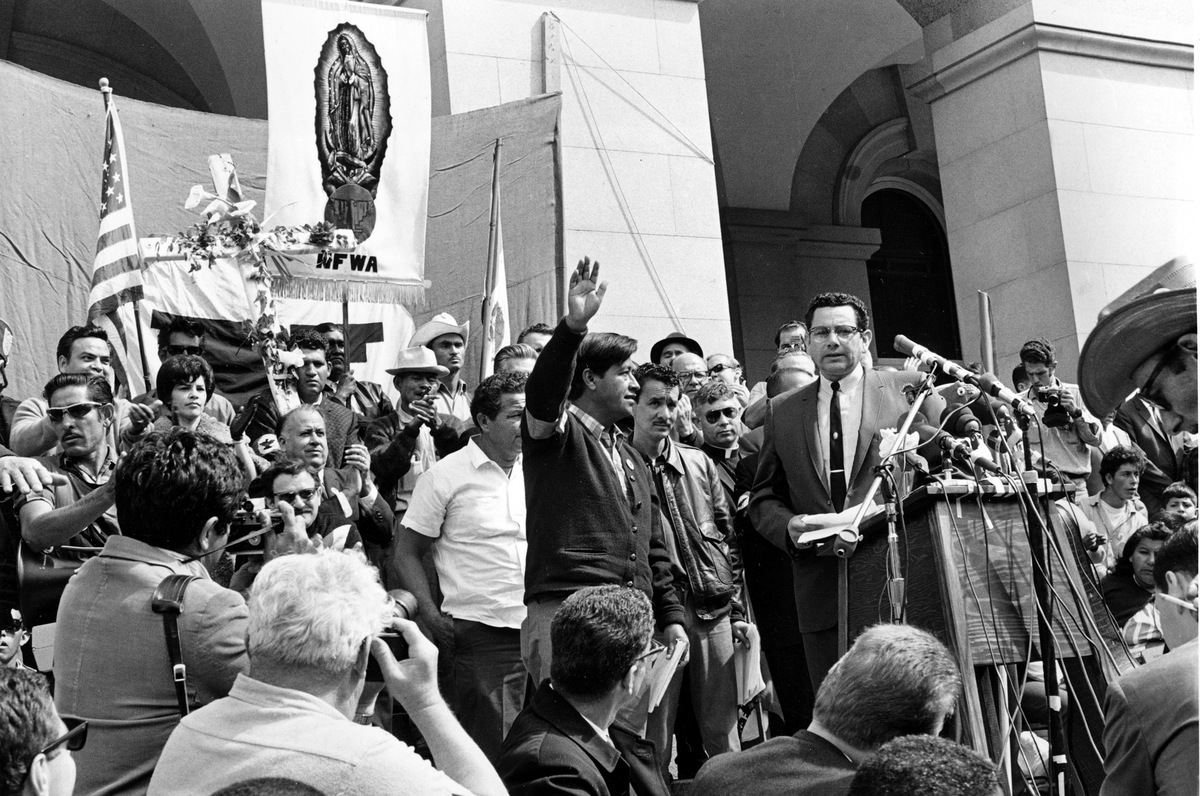 Chavez, leader of the Delano grape pickers' strike, waves to the crowd from the steps of the California Capitol in Sacramento, on April 11, 1966. Chavez led his strikers and followers on a more than 300-mile, 25-day pilgrimage from Delano to Sacramento in an attempt to meet with Gov. Pat Brown on Easter Sunday.

1966: Chavez leads strikers on a 340-mile march from Delano to Sacramento to bring awareness to La Causa of farmworkers. The NWFA also merges with the AWOC to form the United Farm Workers.

Chavez also helps lead a strike and march by farmworkers in Starr County in South Texas. Ultimately, the strike fails, as Texas Rangers bring in replacement workers from Mexico.

1967: In addition to the strike, Chavez calls for a nationwide boycott of non-union California table grapes. He sends UFW workers to cities across the country to raise awareness. Their efforts dovetail with the civil rights movement and a greater consciousness of racism and economic inequity. Millions of Americans supported the boycott, which eventually became international in scope and lasted until 1970. 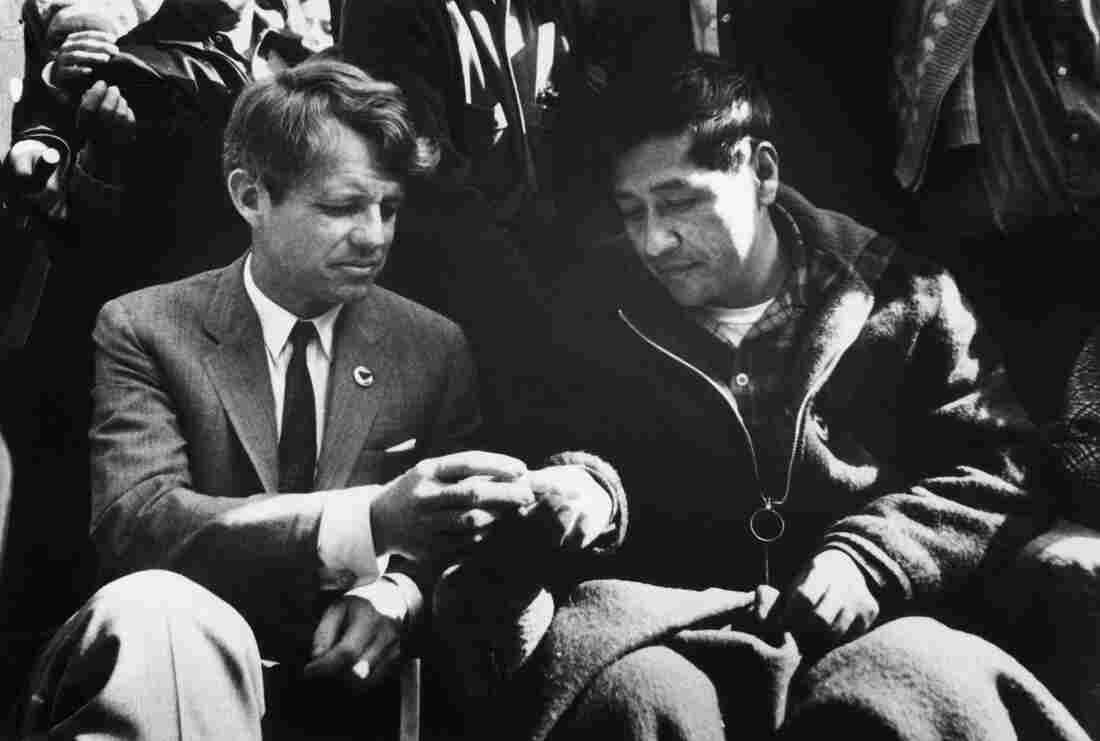 Sen. Robert F. Kennedy shares bread with Chavez on March 10, 1968, as the union leader ends a 25-day fast in support of nonviolence in the strike against grape growers. Bettmann Archive/Getty Images hide caption 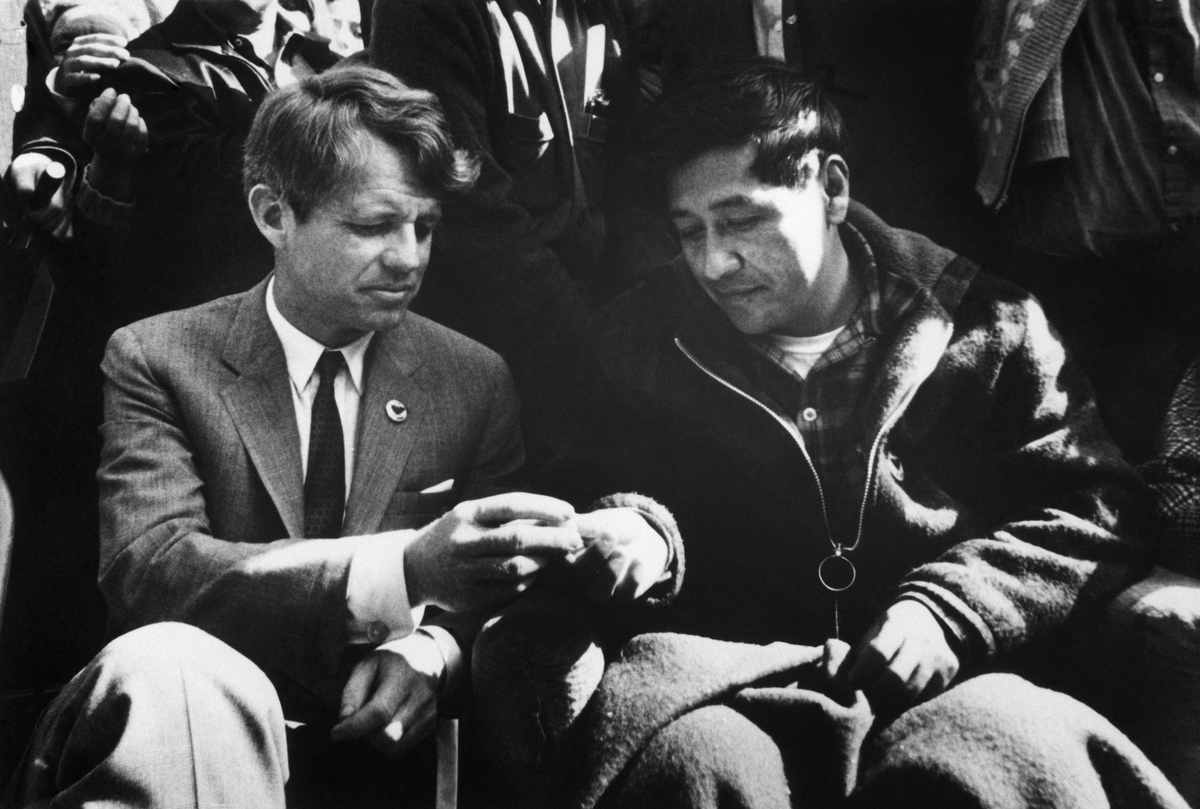 Sen. Robert F. Kennedy shares bread with Chavez on March 10, 1968, as the union leader ends a 25-day fast in support of nonviolence in the strike against grape growers.

1968: In February and March, Chavez fasts for 25 days to rededicate and recommit himself to the struggle for justice through nonviolence. He loses 25 pounds. Sen. Robert F. Kennedy joins him at the Mass where Chavez breaks his fast, and calls the labor leader "one of the heroic figures of our time." 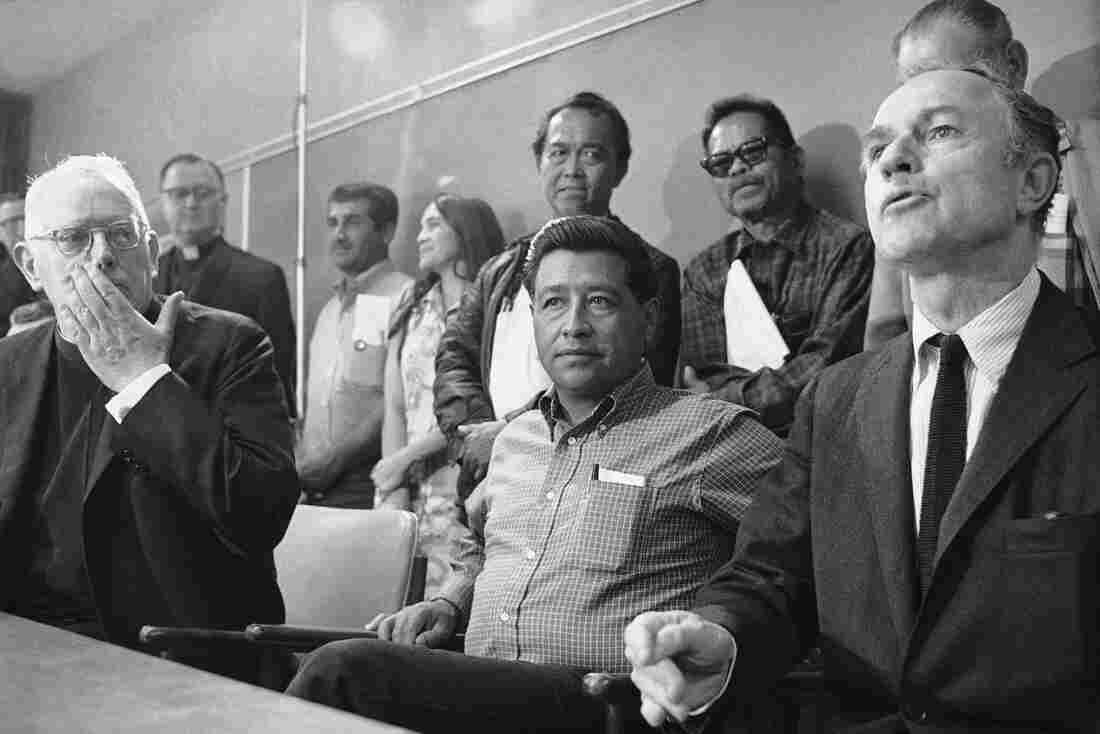 A judge jails Chavez and says he will stay behind bars until he calls off a nationwide lettuce boycott, Dec. 5, 1970. AP hide caption 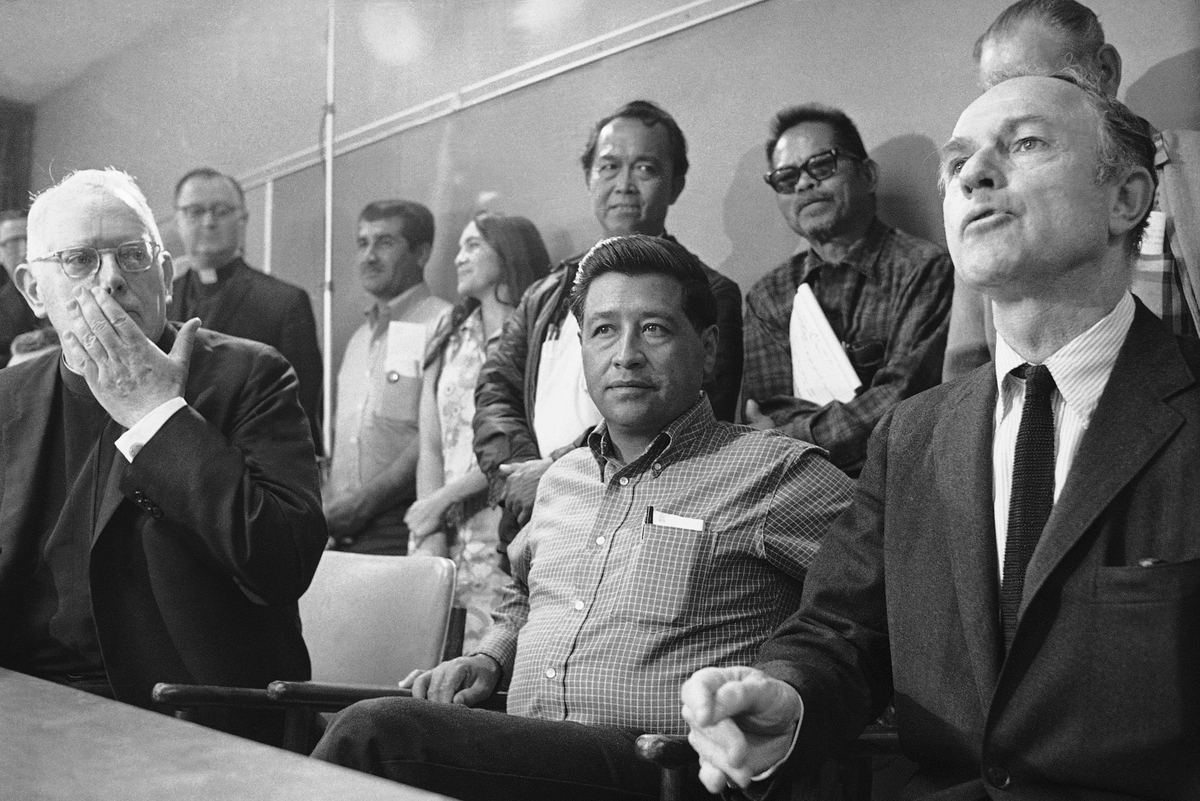 A judge jails Chavez and says he will stay behind bars until he calls off a nationwide lettuce boycott, Dec. 5, 1970.

1970: After five years, the strike and boycott against the grape growers ends in victory for the UFW. In the past, big agribusiness had been able to end strikes through violence or negotiating small, one-off pay increases. This time, the union is able to secure broader rights: to organize and bargain collectively, in addition to better wages.

He calls for a nationwide boycott of lettuce.

1972: Chavez fasts for a second time, for 24 days, to protest an Arizona law that bans farmworkers from organizing, boycotting or striking.

1973: After a second strike against grape growers turns violent, Chavez calls off the strike and begins a second boycott of grapes and lettuce.

1975: California passes the state's landmark Agricultural Labor Relations Act, which establishes and protects the rights of all farmworkers to form unions and bargain for better wages and working conditions. 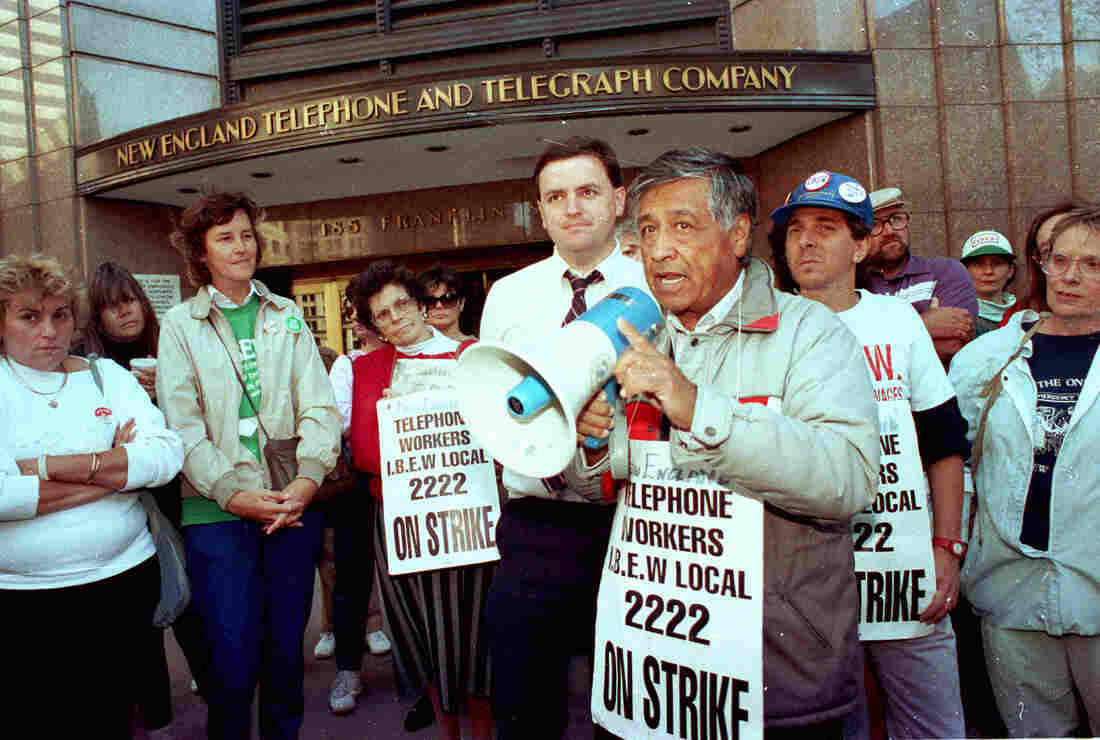 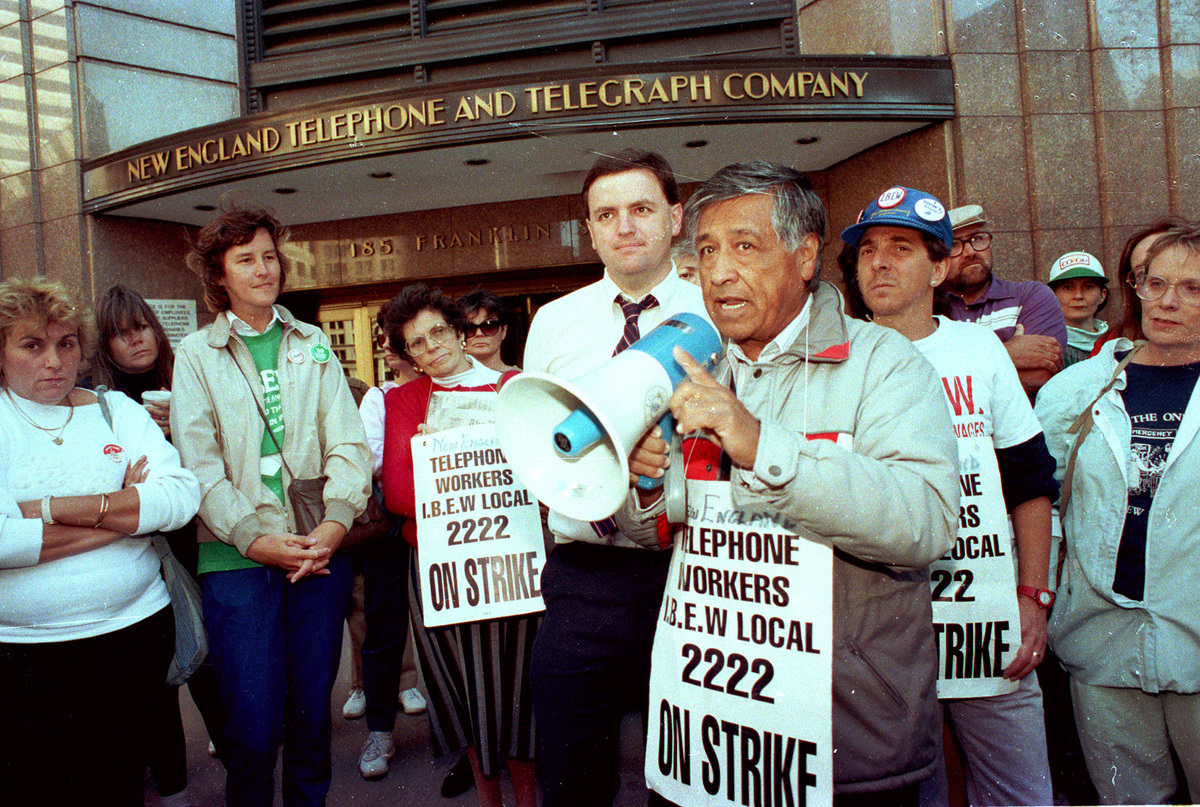 Chavez speaks to striking telephone workers outside the New England Telephone and Telegraph Company headquarters in Boston on Oct. 13, 1989.

1982: With the strong support of agribusiness in the state, Republican George Deukmejian is elected governor of California. He proceeds to defang enforcement of the farm labor laws.

1986: Chavez kicks off his "Grapes of Wrath" campaign to draw attention to the pesticide poisoning of farmworkers and their children. 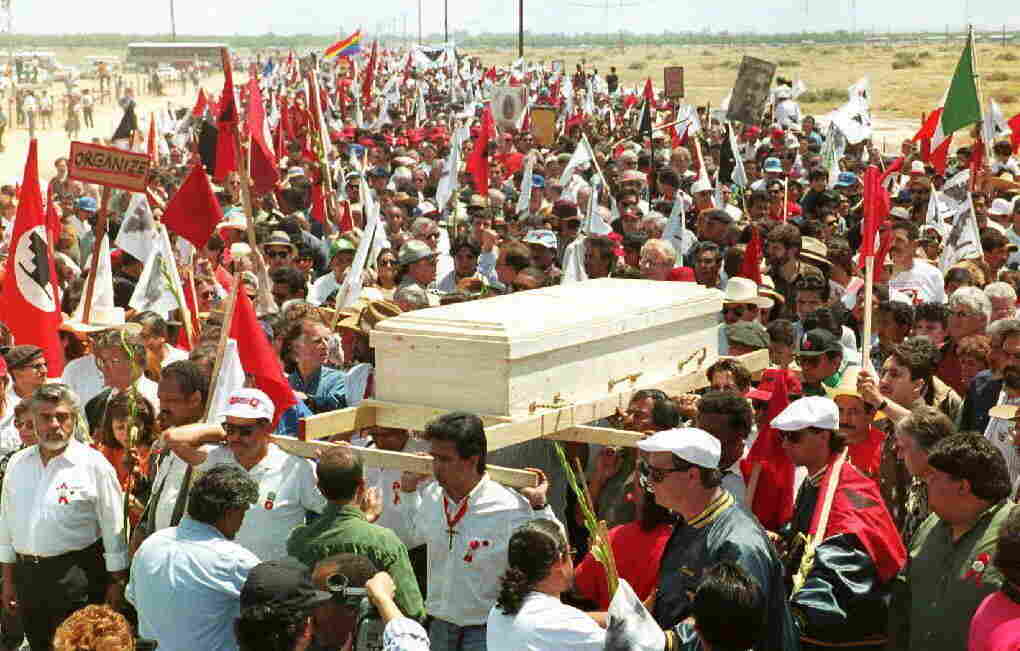 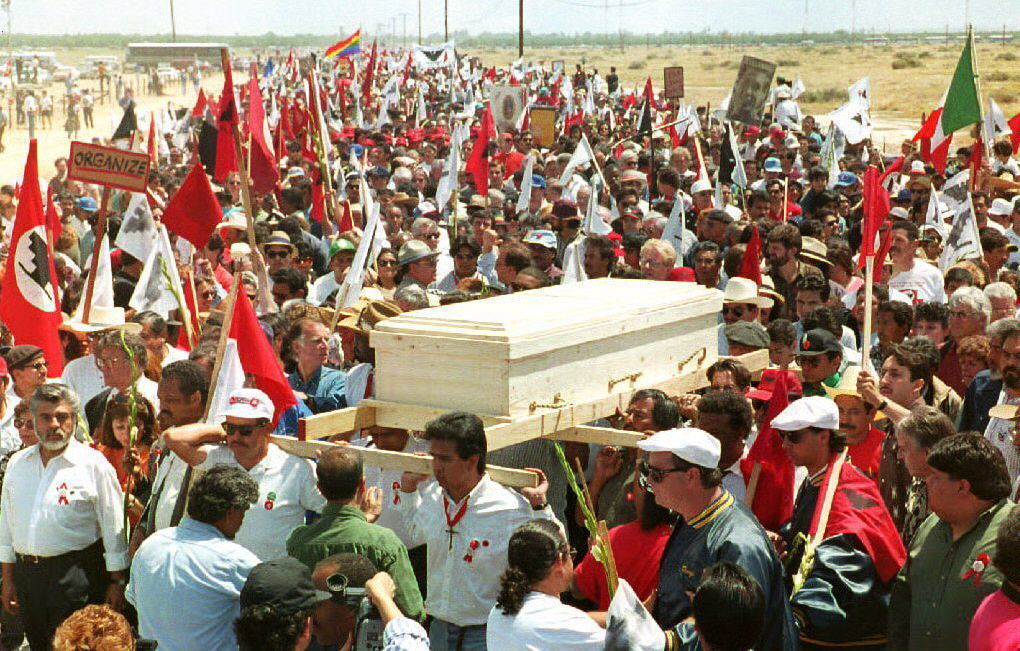 More than 40,000 people attended Chavez's funeral on April 29, 1993. The casket was carried through Arizona farmland.