Accessibility links
There Could Be No Other Way: 'Blue Monday' Is Back Chynna Clugston Flores' cult comic about a music-crazy high schooler and her mad mod friends is back after more than a decade. It's a largely autobiographical look at teen life in the early '90s.

There Could Be No Other Way: 'Blue Monday' Is Back

There Could Be No Other Way: 'Blue Monday' Is Back 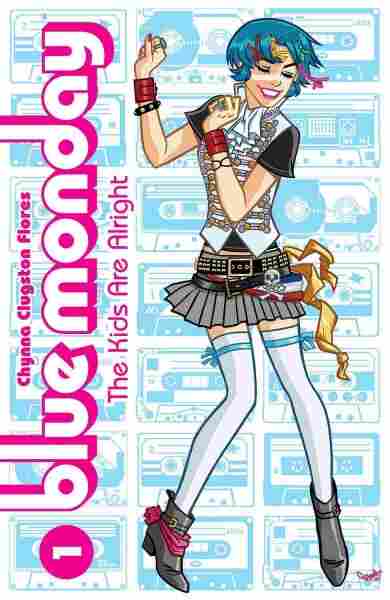 The Kids Are Alright

Blue Monday was a comic weirdly out of time. Creator Chynna Clugston Flores started drawing the adventures of music-loving high-schooler Bleu Finnegan and her band of mad, mod friends in the late 1990s — but somehow they lived in a world where grunge never happened, where Adam Ant and Paul Weller were still style icons and The English Beat ruled the airwaves (in other words, my kind of place).

In an email interview, Clugston Flores tells me Blue Monday is loosely based on her own high school experiences, "though a lot is exaggerated for obvious reasons. Almost everything involving the Badger mascot is true, however, and there are other stories that draw a lot from actual events. Some that might surprise you!"

Bleu inherited some of her own obsessions, Clugston Flores says: Buster Keaton, New Wave music and Modernism. "I think it'd be safe to say roughly 80% of Blue Monday is autobiographical, and the rest just seems like it should have happened that way. Did I mention the Jesus Head is real?"

I just want to say, it's been more than a decade since Blue Monday first came out and I'm still haunted by that darn Jesus head. Zoop! Zoop!

And more! 16 years since the first series, which is crazy. The Jesus Head isn't single any longer, either, but I don't want to terrify you further!

What is this world Bleu lives in? Or really, when is it? I remember picking the series up sometime in the early aughts and seeing the Blur lyrics quoted in that first dream sequence and thinking, here too is someone who denies grunge.

Oh, I hated grunge so much! I was neutral to it at first, and even liked "Smells Like Teen Spirit" when it was released because it sounded like a new style of punk, but then I realized grunge was killing the kind of music I loved to dance to, and the scene was anti-fashion!

Blue Monday is set "somewhere in the early 1990s," though since I wasn't very far removed from high school when I started working on it in earnest, some mid-'90s Britpop seeped in. To be fair, though, Blur is featured in their baggy phase from Leisure, which we did play in high school on repeat. The series is very much during the shoegaze era, though Bleu can't let go of her first love, New Wave, from ten-plus years before, hence her obsession with Adam Ant (her first real crush).

How important is music for Bleu and her friends?

Oh, it's so incredibly important. Music absolutely shapes them, it feeds their inner lives, their thoughts and crushes, it's on in some capacity nearly every moment they can possibly be listening to it. Music is integral to understanding subcultures, and the kids are well aware of this. It's a huge part of what links them all together. I've never understood folks who have only a passing interest in music, or who "like everything" and have no real opinions about it.

If you're not passionate about some kind of music, I can't fathom you being genuinely passionate about much of anything at all. That may be unfair, but I always felt that the kind of music one likes says a lot about them, and it says a lot about these characters, too. On that note, it's not necessary to know the music referenced in Blue Monday in order to get it or enjoy the story, not at all. It's intended to be an extra layer to get the feel for particular scenes or the overall storyline. It's a bit of a bonus for those who might appreciate it.

Going back and reading the original comics, they feel weirdly innocent — there are things in them that seem fine in context but would never fly today, like Clover's violence or Alan and Victor surreptitiously filming the girls swimming in their underwear.

Sure, the landscape between today and the early '90s has changed dramatically, but as far as Clover's violence goes, that's meant to just be slapstick — it's not meant to be taken as reality. I see her outbursts as the equivalent to maybe socking your buddy in the shoulder for swiping your french fries when you weren't looking, it'd be about that rough and without genuine malice. Like early Warner Brothers cartoons, it's for the sake of comedy above all.

I think Blue Monday gives the reader a pretty interesting look into pre-internet teen life, even with the over-the-top stories and gags. It's all there. Seriously, some of us still had rotary phones in our homes, even though they were well on the way out.

As for the boys recording the girls, that would definitely not fly today, and with very good reason! Back in the '80s and '90s it would be considered more prankish than anything on both sides, not something that could affect someone for years and years to come — even if it was, say, broadcast on local channel 13 to a handful of viewers.

With today's perspective, I think Blue Monday gives the reader a pretty interesting look into pre-internet teen life, even with the over-the-top stories and gags. It's all there. Seriously, some of us still had rotary phones in our homes, even though they were well on the way out. Texting was literally handwriting text on a piece of binder paper and folding it into interesting shapes and passing it between classes.

I totally agree that the characters are comparably innocent in many ways, they're definitely young and often bumbling, so you get to watch them feel their way around and make mistakes — you get to be embarrassed for them when they do screw up, which is often — but you'll also get to watch them grow, as well.