Accessibility links
In A Turbulent Election Year, Mosques Organize En Masse Voting In an election year marked by vitriol toward the Muslim community, some mosques are urging their worshipers to vote. To do so, they're borrowing a strategy used by African-American churches. 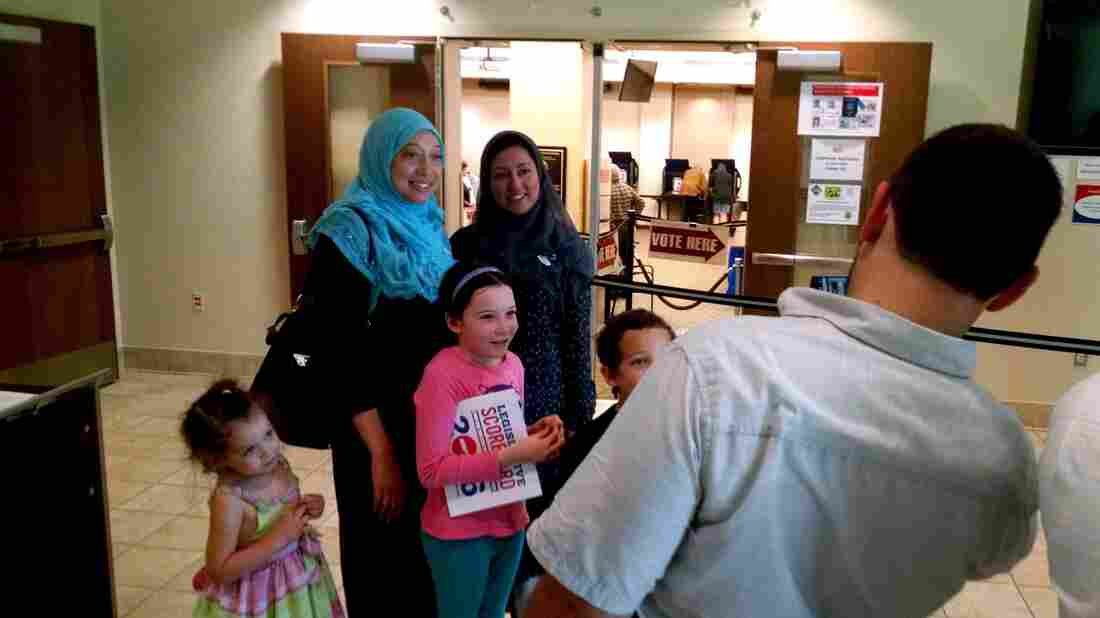 Alana Raybon, in a blue head scarf, pauses for a photo with a friend and her children after voting in Nashville's Howard Office Building. Chas Sisk/Nashville Public Radio hide caption 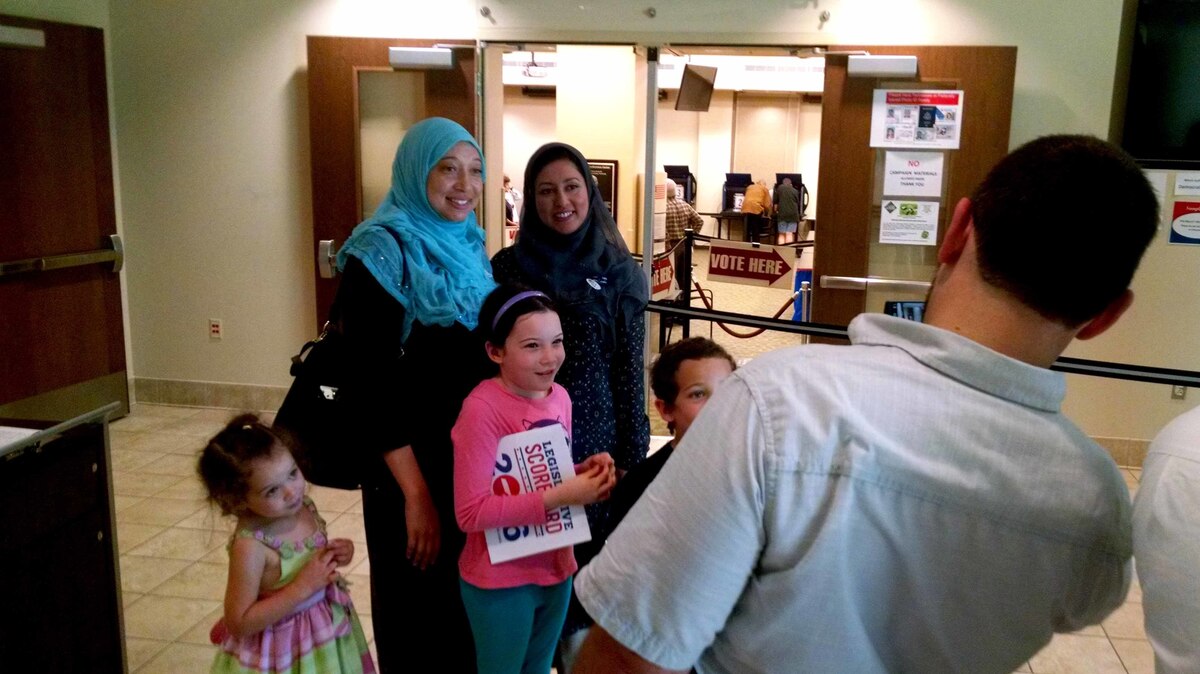 Alana Raybon, in a blue head scarf, pauses for a photo with a friend and her children after voting in Nashville's Howard Office Building.

In an election year filled with anti-Muslim vitriol, some mosques are urging their worshipers to vote in an attempt to make their voices heard. To do so, they're borrowing a strategy used by African-American churches and organizing "souls to the polls" campaigns.

Many mosques have traditionally shunned politics. As recently as the late 1990s, Muslim scholars were divided on the ethics of voting. For years, it was common for many Muslim-Americans to not exercise their voting rights. But this year, three of Nashville's biggest mosques are busing worshipers to the polls. The organizers say this is more about demonstrating the importance of voting than providing transportation.

On a recent Friday afternoon at the Islamic Center of Nashville, Tenn., just after the end of prayers, a crowd gathered around a table where sample ballots sit next to a book of Islamic scripture.

Tamanna Qureshi was there, telling them about a website where they can find out more about their district, as well as find candidates' answers to surveys.

Qureshi, 41, grew up in Nashville, the daughter of Bangladeshi immigrants, and has attended the mosque since she was a child. Now, she's a volunteer with the League of Women Voters.

Voter outreach groups have been working mosques for years, trying to overcome a bias against voting among many Muslims and immigrants. A common excuse is one that Qureshi heard from her own parents.

"There was this feeling of, are we meddling in something that's not our business?" Qureshi said. "Of course, my response is, 'It's absolutely your business. You're living here. You're paying taxes. You're a citizen. And this is what you need to do to participate fully in the community.' "

Outside the mosque, a long white school bus stood idling, waiting to take mosque-goers to an early voting place ahead of this week's statewide primaries.

Sahar Fakhruddin, a 20-year-old college student, was on one of the buses going to the polls. She said, with a laugh, that she got on the bus mainly because her aunt, a mosque elder, asked her to. 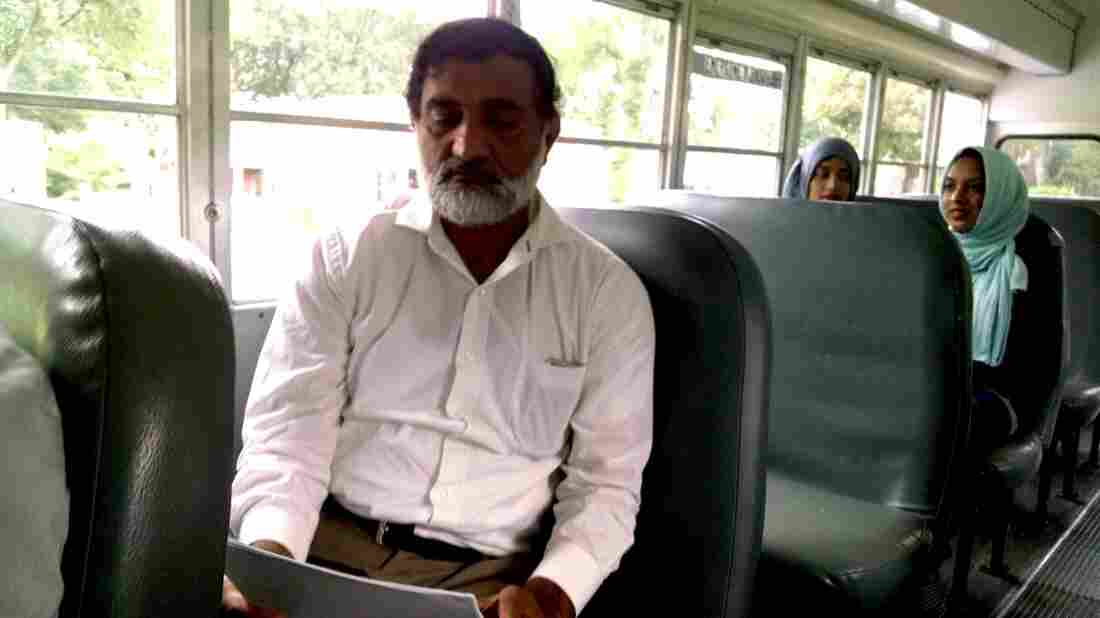 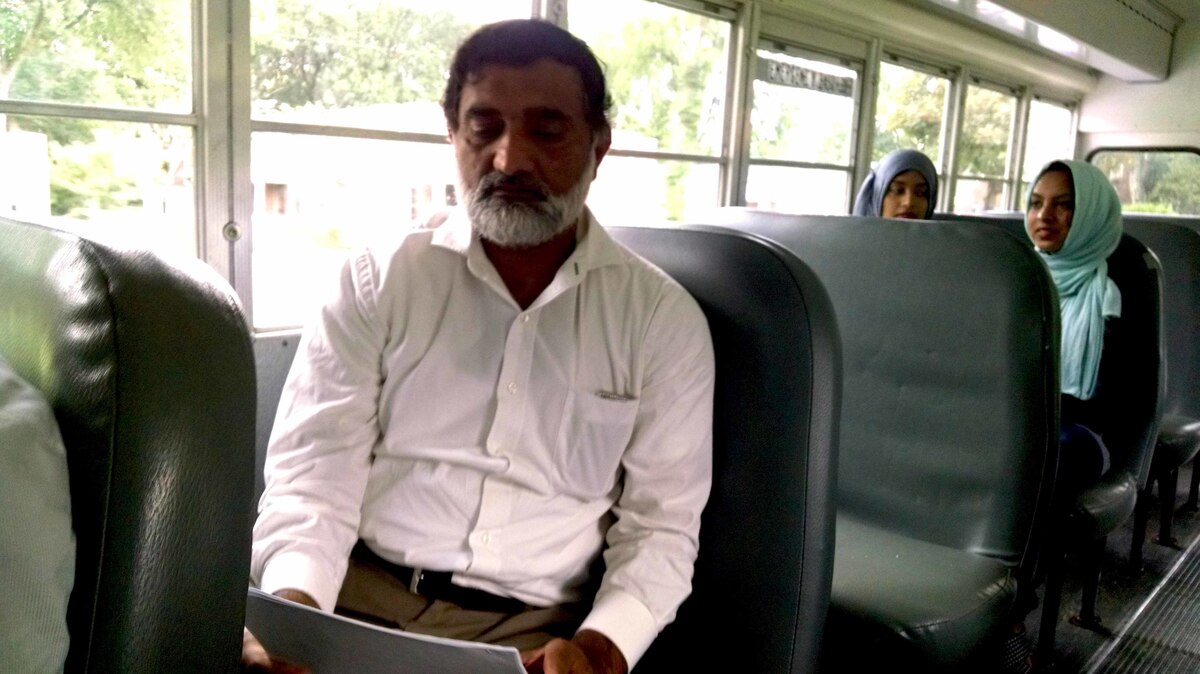 Hafiz Sibtain reviews a sample ballot as he rides a bus to early voting in Nashville.

"But then also because ... I think it's important to show that we're coming in as a group," said Fakhruddin, who has voted before.

She was there with her 18-year-old cousin, Maryam Fakhruddin, a first-time voter who said she was excited to participate.

"I think it's really important, just as a female American-Muslim citizen to be part of this election," she said.

I feel like with this presidential election, people are finally able to see why it's more important — more so than other years.

The Council on American-Islamic Relations says three-quarters of registered Muslims plan to vote in 2016, based on a survey the group conducted earlier this year. (By comparison, less than 60 percent of eligible U.S. citizens voted in the 2012 elections.)

Organizers of this bus ride say that hasn't always been the case. They say even some Muslims born in the United States believe voting is a secular practice that's best avoided. Others say they're simply too busy to take the time.

Sahar Fakhruddin has heard those excuses from her grandparents, who emigrated from South Asia and tended to avoid politics.

"I feel like with this presidential election, people are finally able to see why it's more important — more so than other years," she said.

This election year in particular, many Muslims say they feel like they've become pawns in a political game. Candidates score points by blaming them for violence perpetrated by other people, both on the national level and locally. 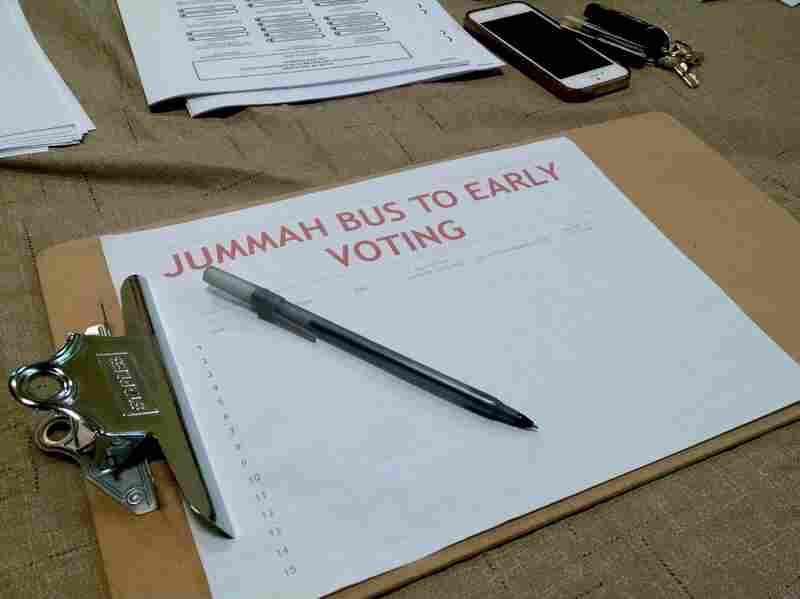 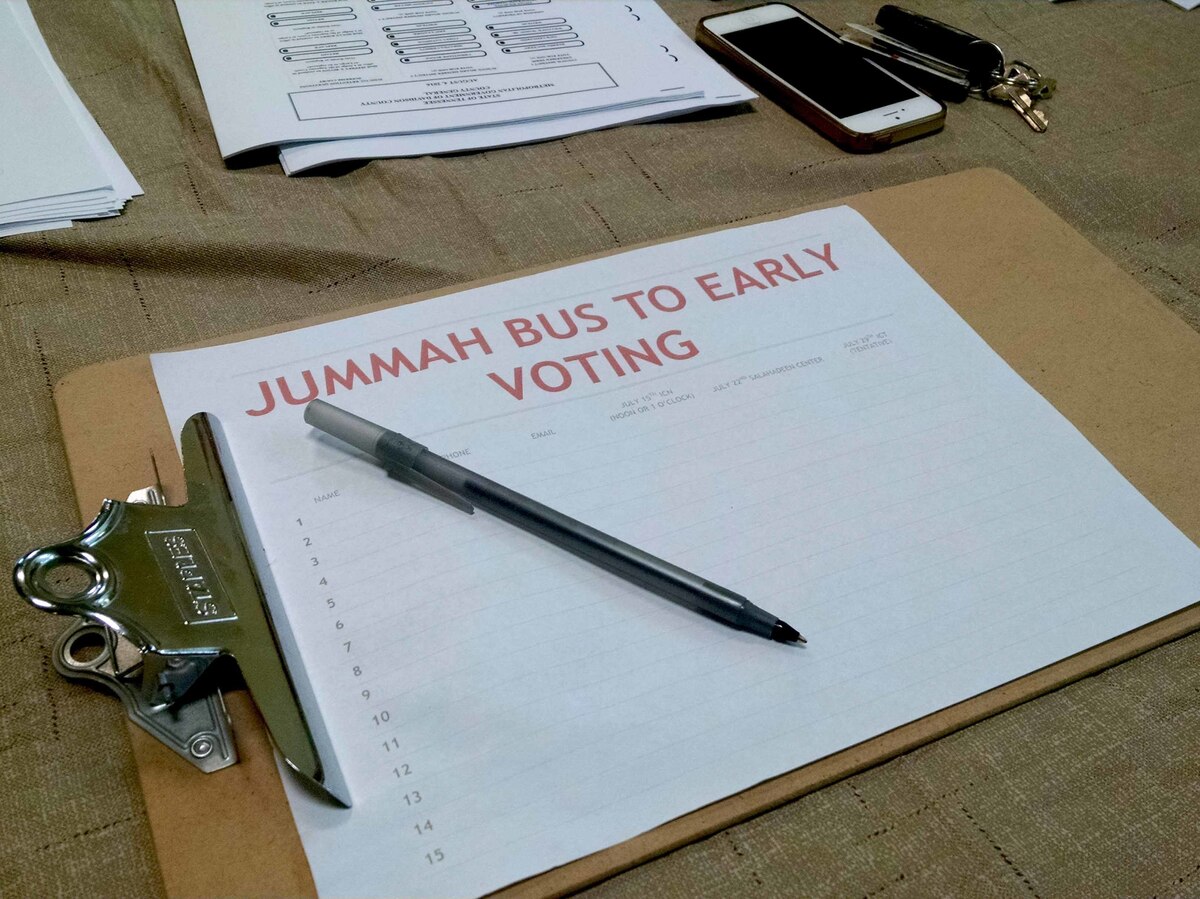 In Tennessee, Muslims have faced state legislation aimed at their community on a regular basis. Those include bills banning Sharia law and attacking perceived pro-Muslim bias in school textbooks.

The bus ride is nonpartisan and at least one voter, Alana Raybon, planned to vote in the Republican primary.

"It's my duty to stand up against injustice and wrong and [speak] out against the horrible actions of ISIS," Raybon said. "Not allowing politicians who are trying to marginalize us be in office is really, really important."

At the polls, things go smoothly. Raybon brings along her three young children as she goes to the voting booth.

Afterward, they pose outside the polls for a group picture. Then it's back on the bus for the return trip. Organizers plan to bring the bus out again for the general election this fall.

A big bus, they say, is a good way to show Muslims they have no excuse for not voting.