Accessibility links
Whose Side Was She On? 'American Heiress' Revisits Patty Hearst's Kidnapping Hearst was abducted in 1974 and then declared allegiance to her captors. Legal expert Jeffrey Toobin does not believe Hearst was brainwashed, but rather, "responded rationally to the circumstances." 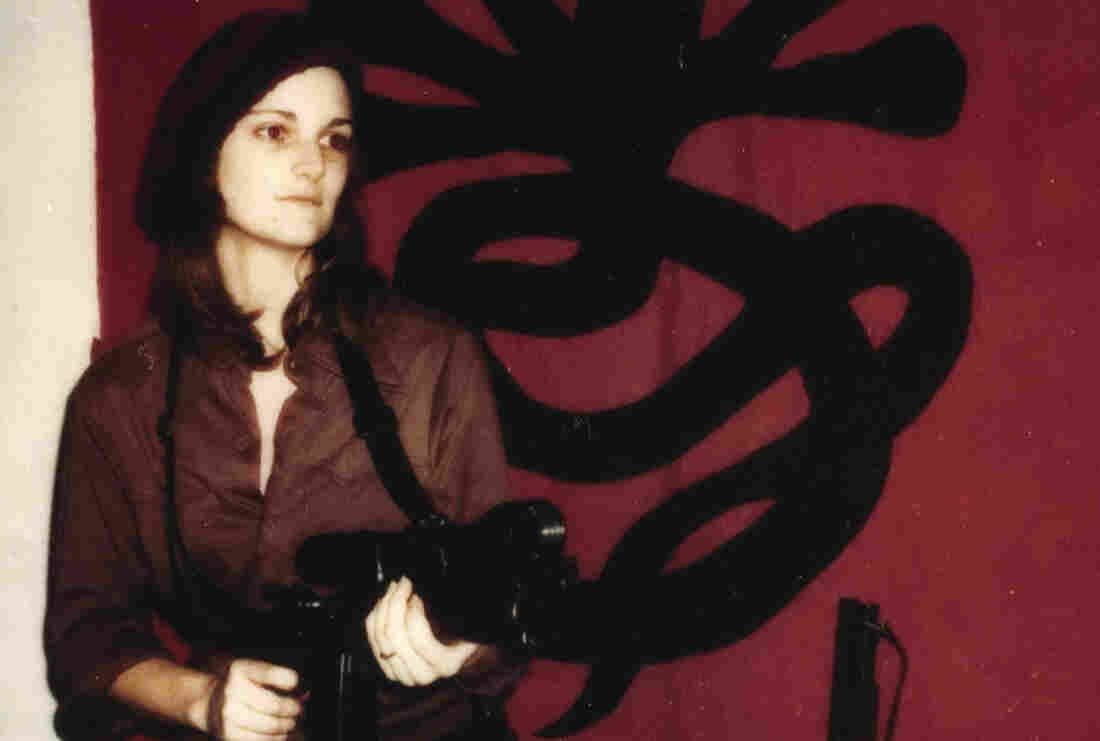 "This iconic photograph became one of the most famous images of the 1970s," Jeffrey Toobin says. It shows Patty Hearst standing in front of a Symbionese Liberation Army flag several months after she was kidnapped. Penguin Random House hide caption 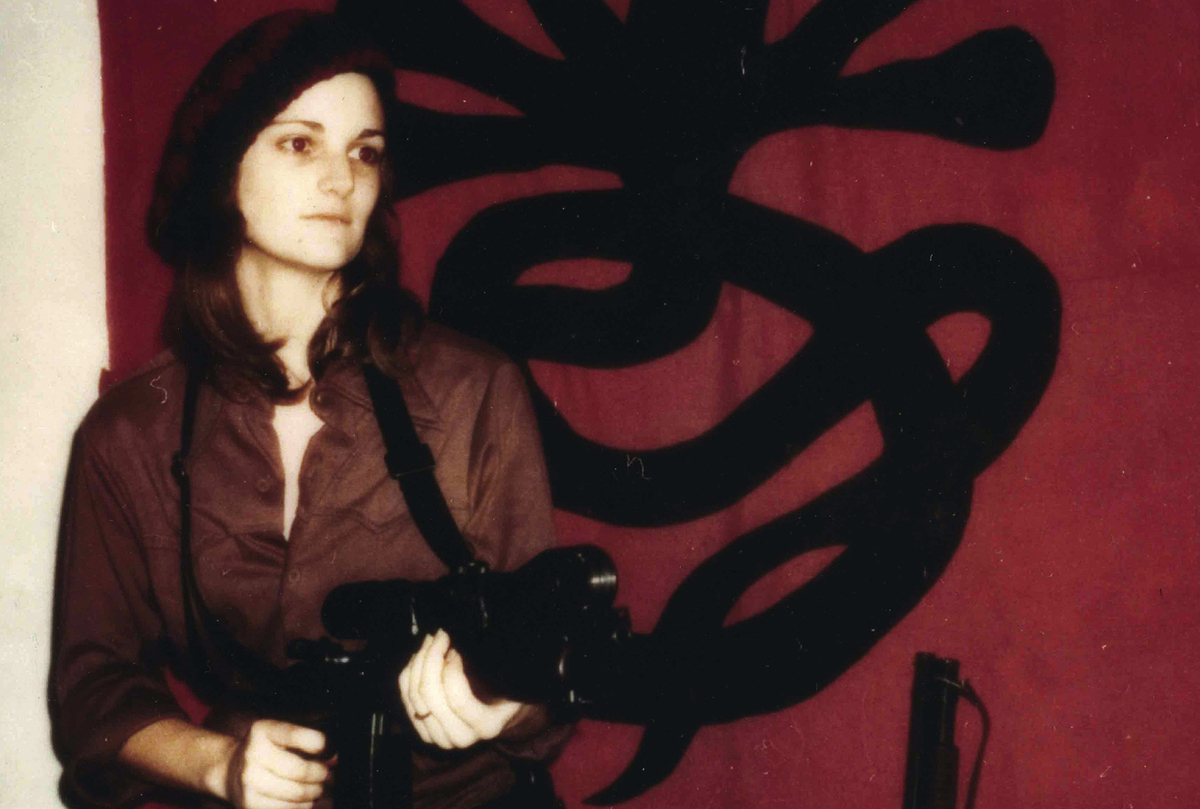 "This iconic photograph became one of the most famous images of the 1970s," Jeffrey Toobin says. It shows Patty Hearst standing in front of a Symbionese Liberation Army flag several months after she was kidnapped.

In February of 1974, Patty Hearst, the 19-year-old granddaughter of the wealthy newspaper publisher William Randolph Hearst, was kidnapped by the Symbionese Liberation Army, a small, armed revolutionary group with an incoherent ideology and unclear goals.

Two months after her abduction, questions concerning Hearst's ties to her abductors arose after Hearst declared her allegiance to the SLA, denounced her family and was seen carrying an automatic weapon during an SLA bank robbery. Newspapers published a photograph of the heiress carrying a weapon and posing in front of the SLA flag.

"You look at this photograph and you have to wonder: Whose side is she on?" author Jeffrey Toobin tells Fresh Air's Terry Gross. "The mystery of that photograph is really what the mystery of this book is about."

Toobin's book, American Heiress, revisits the famous kidnapping and the ongoing question of Hearst's motivations and loyalty in the 19 months that followed her abduction. "If you look at her actions ... over the following year, you see the actions of a revolutionary, not a victim," Toobin says. "There was some glamour to what she was doing, the swagger of wearing berets, of carrying machine guns — the romance of revolution was an undeniable part of the appeal of the SLA." 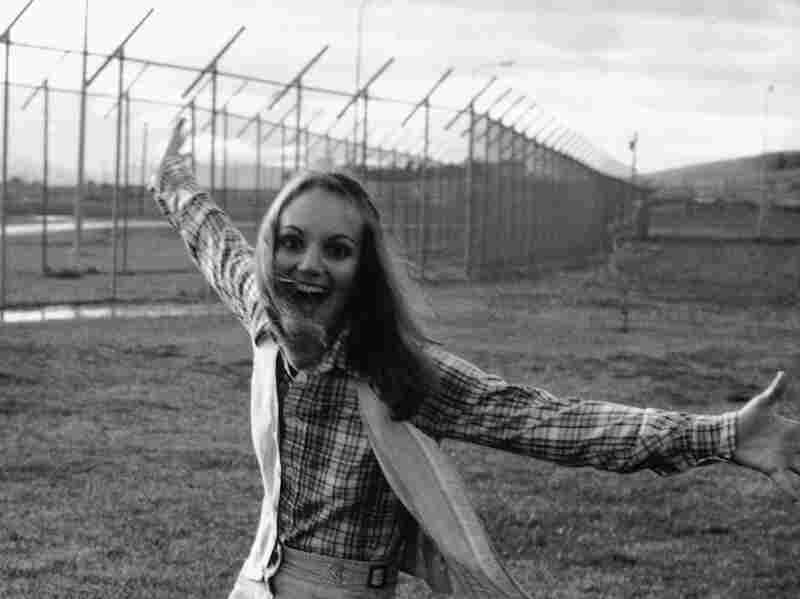 Hearst mugs for the camera in 1979 after President Jimmy Carter signed the commutation order for her early release from prison. Associated Press hide caption 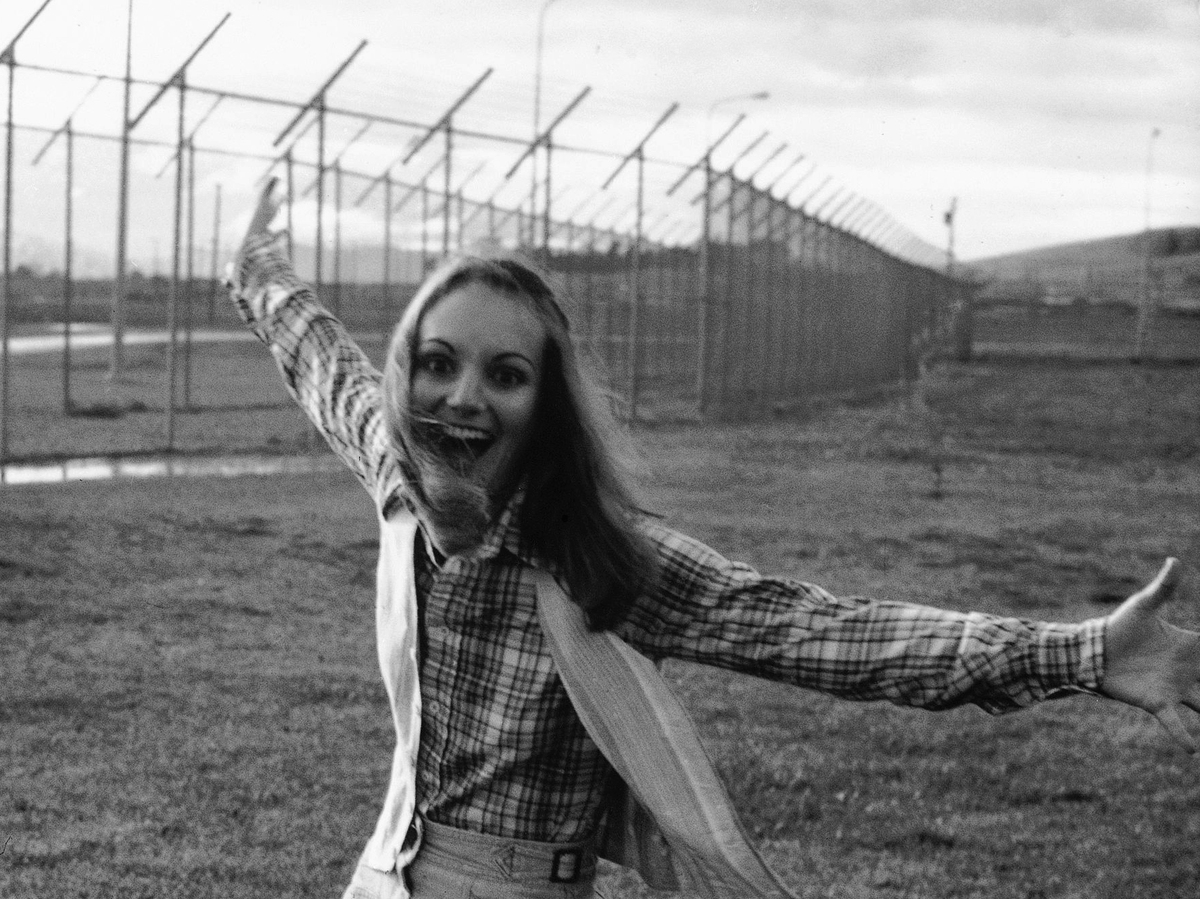 Hearst mugs for the camera in 1979 after President Jimmy Carter signed the commutation order for her early release from prison.

Hearst was eventually captured by the FBI, convicted of bank robbery and sentenced to seven years in federal prison. She served 22 months before President Jimmy Carter commuted her sentence. Later, President Bill Clinton pardoned her.

Toobin calls the presidential actions on Hearst's behalf an example of "wealth and privilege in action."

"The fact that she got these two presidential gestures of forgiveness is the purest example of privilege on display that frankly I have ever seen in the criminal justice system," Toobin says. 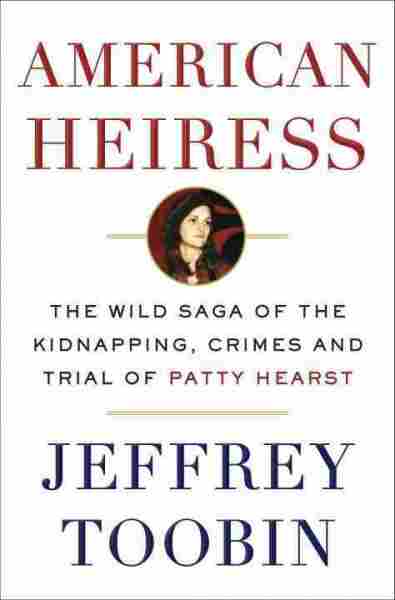 The Wild Saga of the Kidnapping, Crimes and Trial of Patty Hearst

It is a time when all American institutions were reeling. You had Watergate ... you had the energy crisis, you had Vietnam still not quite over. It really seemed like America was splitting at the seams, especially in the Bay Area, which really had the worst of all possible worlds when it came to violence.

On the power of the Hearst family name

There has never been a more powerful or charismatic or important newspaper owner than William Randolph Hearst, Patty's grandfather, whom she never met, because he died shortly before she was born. He was not only a powerful publisher, he was an immense figure in American history. He was the model for Citizen Kane. He built the grandest residence in America, San Simeon, and the name Hearst in 1974 still captured a sense of power and wealth that is almost like [Bill] Gates and [Jeff] Bezos, or even more so, than that today. So the fact that a Hearst was kidnapped was not just some random rich teenager, but a resonant American name.

On who Patty Hearst was at the time of her kidnapping

The SLA, when they kidnapped Patty, knew nothing about her except that she was a Hearst and that she was a sophomore at Berkeley. But they caught her at a particularly vulnerable and restless moment in her life. She had outraged her parents by moving in with her older boyfriend, but that relationship was souring. Later she described herself as being mildly suicidal; she wanted to get out of the relationship, but she didn't want to admit to her parents it was a failure. She was starting to have a political awakening of sorts. She was 19, and like a lot of 19-year-olds, she was very much an unformed person, and the SLA barged into her life at a time when she was uniquely receptive to new influences.

On the Symbionese Liberation Army

A helpful way of thinking of the SLA is, there's no such thing as "symbionese," they didn't liberate anything or anyone, and as an army, they had, at tops, about a dozen people. So it is an utterly misleading, but certainly memorable name. ... One of the reasons, in a way, it took so long to catch Patty and the remnant of the SLA, was that they had no connections to anybody. They were almost completely isolated, so there was no route in for the people, the FBI and others, who were pursuing them.

The photograph is Patricia standing with a machine gun in front of the SLA flag, which is a seven-headed cobra. It was taken shortly before the famous bank robbery, April 15, 1974, of the Hibernia Bank where Patricia was also photographed by a security camera holding a different machine gun. The photograph, which was distributed to the press while she was in captivity, I think the expression on her face is so mysterious and so subject to so many different interpretations. This iconic photograph became one of the most famous images of the 1970s.

Jeffrey Toobin Profiles 'The Nine' Inside the Robes

I think, again, this photograph is a metaphor for her whole story. ... It's also a broader metaphor because it's about the '70s, where young people, even a Hearst, were so at sea that many people could actually believe that a Hearst would become a revolutionary.

On evidence that Patty Hearst cooperated with her captors during a May 16, 1974, incident

Patty and two of the SLA members decide to go shopping. They need stuff and they go to a sporting goods store. Bill and Emily Harris go inside the sporting goods store, leaving Patty in a van across the street, with the key in the ignition. She's free to leave — she can drive away, she can walk away — but instead she waits.

... given the opportunity to walk away when her colleagues, her comrades are arrested, [Patty Hearst] ... fired a machine gun across a busy street, and that to me is the act of a woman who had joined the SLA.

That to me is the symbol and the demonstration of how Patty Hearst had really changed sides, because given the opportunity to walk away when her colleagues, her comrades are arrested, she ... fired a machine gun across a busy street, and that to me is the act of a woman who had joined the SLA.

On his theory of Hearst 's motivations

In writing American Heiress I tried to avoid using terms like "brainwashing," like "Stockholm syndrome." Those are journalistic terms; those aren't medical terms. My view of Patricia's story is that she responded rationally to the circumstances she was confronted with at each stage of the process.

She was 19 years old, she was being treated well by the SLA, she was being told that her family and the FBI were abandoning her, and she did, in fact, join with them. She robbed three banks. She shot up a street in Los Angeles. She helped plant bombs in several places in northern California. 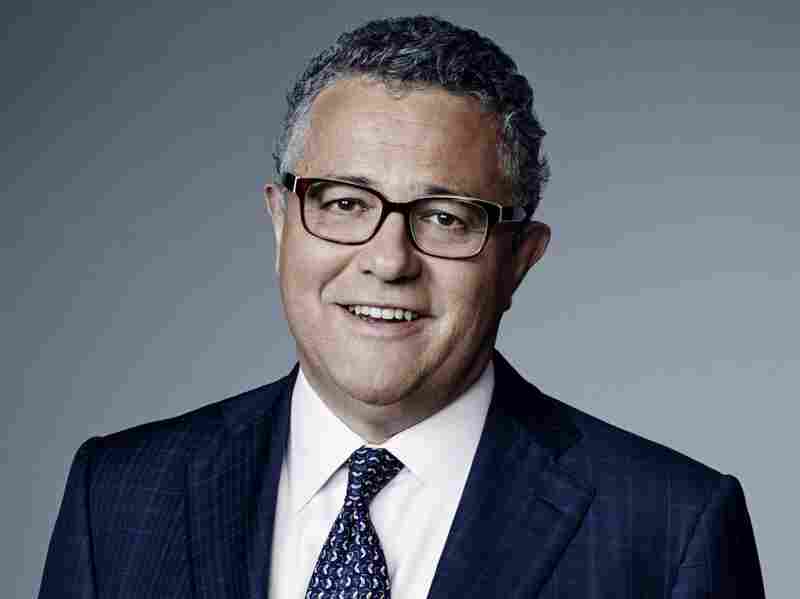 Jeffrey Toobin is a staff writer at The New Yorker and the senior legal analyst at CNN. His previous books include The Run of His Life: The People v. O.J. Simpson and The Nine: Inside the Secret World of the Supreme Court. Robert Ascroft/Random House hide caption 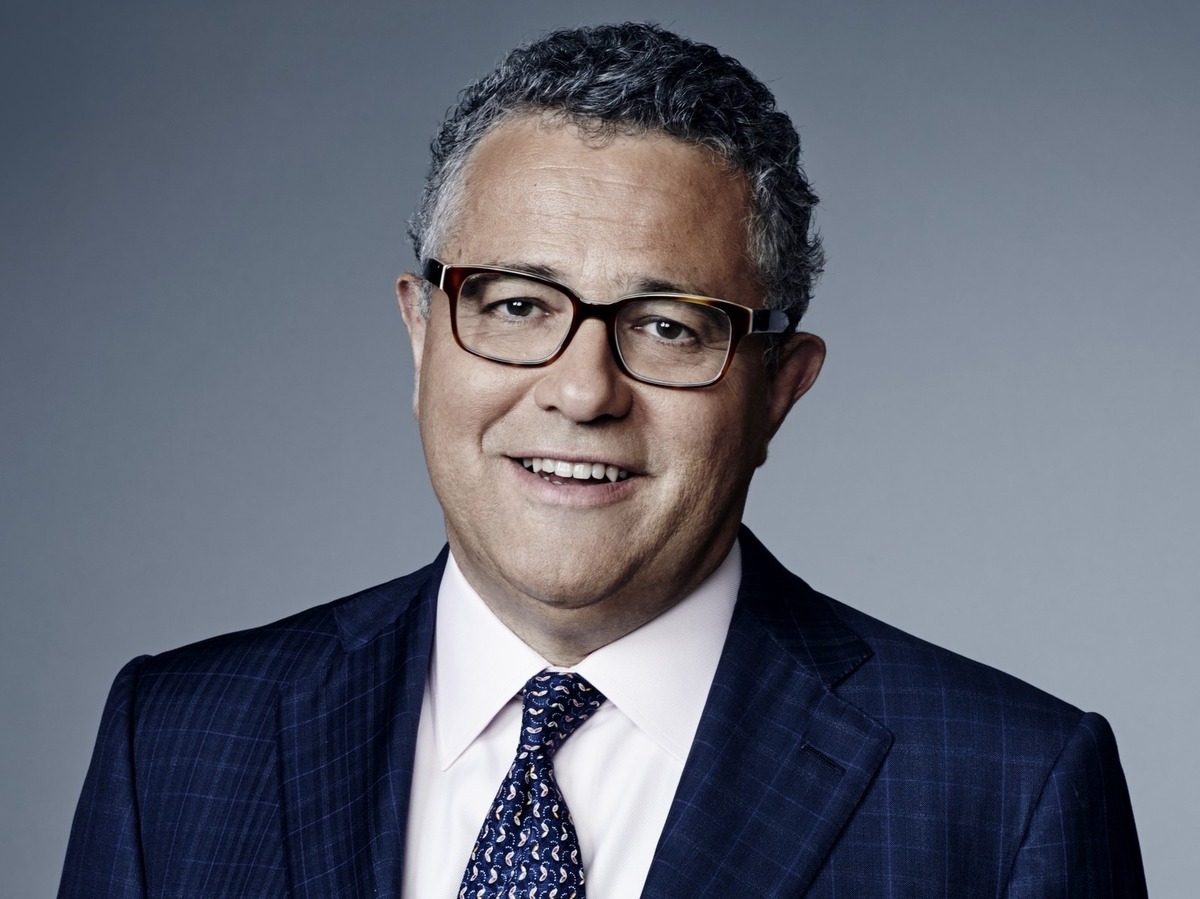 Jeffrey Toobin is a staff writer at The New Yorker and the senior legal analyst at CNN. His previous books include The Run of His Life: The People v. O.J. Simpson and The Nine: Inside the Secret World of the Supreme Court.

She didn't escape because she didn't want to escape. She was part of the group. After she was arrested in September of 1975, she responded rationally then, too. She said, Yeah, I don't want to be a part of all of this lunacy, anymore. I recognize that my family loves me. I recognize that I want to go back to my former life, and that's the position she took at that point.

I don't say any of this in an accusatory way, you know, this is 40 years ago. I'm not trying to convict Patty Hearst, I have no ax to grind in this story, but I think it's a more convincing, clear way to look at the story that she was a rational actor throughout, rather than these basically silly concepts that are imposed by journalists rather than looking at the actual facts of the case.