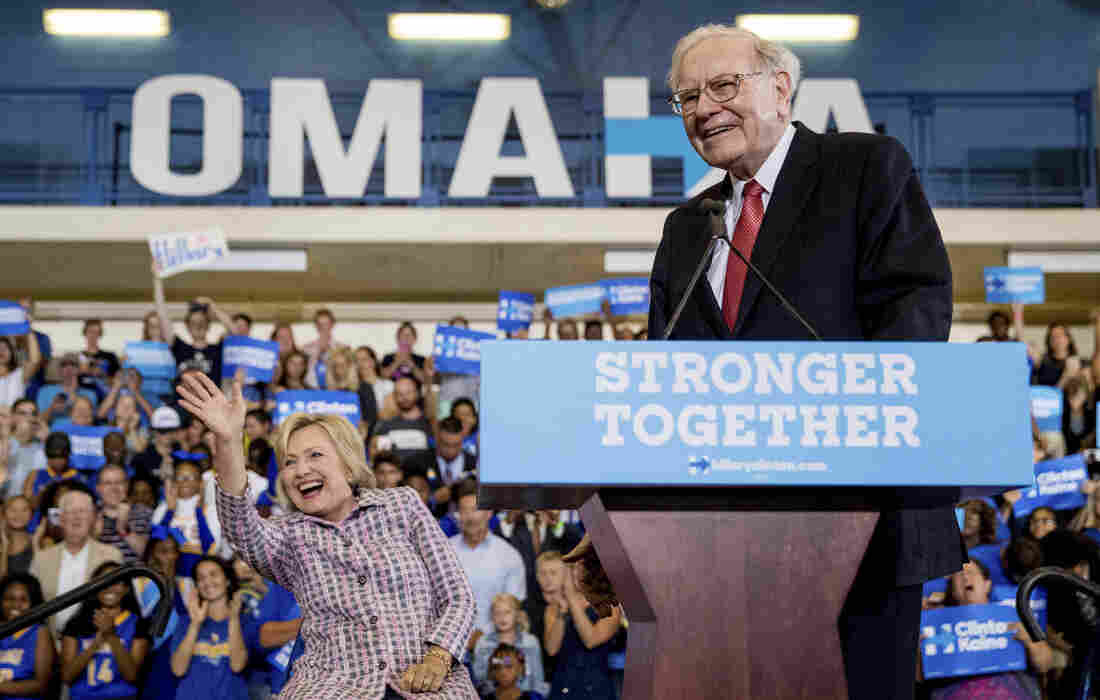 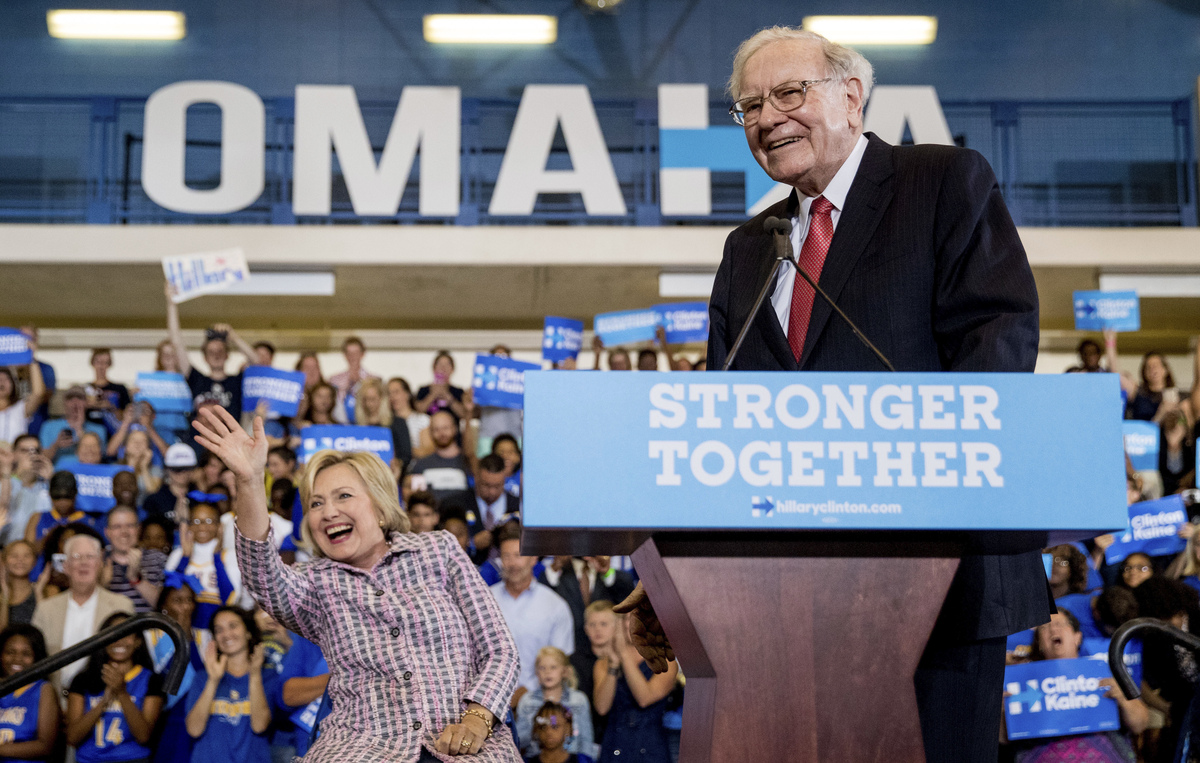 Berkshire Hathaway Chairman and CEO Warren Buffett stands at the lectern during a Hillary Clinton campaign event in Omaha, Neb. Clinton waves in the background.

Republican Donald Trump has built his presidential campaign around the idea that he is an enormously successful billionaire with a long track record of making money — and that given the chance he can use his business smarts to revive the American economy.

"I can tell you as an entrepreneur and investor with absolute certainty that companies and jobs, they won't be created by terrifying people," Cuban said at a Clinton rally in Pittsburgh last week. "No, Donald Trump, they'll be created by inspiring people like Hillary Clinton does."

Trump may be one of the world's best-known members of the club of the super-rich, but some of his fellow billionaires have been turning on him. Cuban, for example, used some choice — even vulgar — language to describe his disdain for Trump. Former New York Mayor Mike Bloomberg blasted him last week at the Democratic National Convention. Legendary investor Warren Buffett, at an event with Clinton, questioned if Trump had any "decency."

And the latest came from Hewlett-Packard executive Meg Whitman, a longtime Republican who made a fortune as the co-founder of eBay, who said she will be supporting Clinton.

"To vote Republican out of party loyalty would be to endorse a candidacy that I believe has exploited anger, grievance, xenophobia and racial division," Whitman said in a statement released Wednesday. "Donald Trump's demagoguery has undermined the fabric of our national character."

She went on: "Trump's reckless and uninformed positions on critical issues --from immigration to our economy to foreign policy — have made it abundantly clear that he lacks both the depth and sound judgment required as president. Trump's unsteady hand would endanger our prosperity and national security. His authoritarian character could threaten much more."

The Clinton campaign has seized on comments like that to undermine Trump's image as a business wizard and, perhaps, to get under his skin a little. The support of billionaires, however, could also have the affect of alienating more liberal voters, like those who supported Sen. Bernie Sanders in the primary. It's a group Clinton also needs on board in the fall election. Still, the campaign hopes having high-profile business supporters can peel off disaffected independents and some Republicans.

"Most of us who have our names on the door know that we're only as good as our word," said Bloomberg, a former Republican, at last week's DNC. "But not Donald Trump. Trump has left behind a well-documented record of bankruptcies, thousands of lawsuits, angry shareholders, and contractors who feel cheated, and disillusioned customers who feel ripped off. Trump says he wants to run the nation like he's run his business. God help us."

Trump has his own billionaire supporters as well, such as Bakken oil developer Harold Hamm and investor Carl Icahn, but they lack the star power of Cuban, Bloomberg, Whitman and Buffett.

On Monday, Clinton sat on an Omaha, Neb., stage behind Buffett, grinning widely as he attacked Trump for not releasing his tax returns. "How many of you would be afraid to have your tax return made public?" Buffett asked the cheering crowd. "You're only afraid if you've got something to be afraid about."

Buffett even offered a kind of deal, saying he'd release his tax returns if Trump did.

For the Clinton campaign, appearances by figures such as Buffett and Cuban can subtly help erode Trump's reputation for wealth and success, Democratic consultant Hank Sheinkopf said.

"The kind of endorsements from Cuban and Warren Buffett and Mike Bloomberg and other like that are ways of saying, 'Donald Trump is not the businessman he says, 'cause if he was, real businessmen would be endorsing him,' " Sheinkopf said.

It's also a way of scaring off potential donors, at a time when Trump appeared to be starting to finally gain some ground in fundraising, though major contributors have been holding back.

"If the Koch brothers have already said in public that they're not necessarily going to do a lot for Trump, the Republican businessmen, Chamber of Commerce types, are going to look at the names Buffett, Cuban, Bloomberg and others and say, 'Wait a minute, what am I investing my money in?' " Sheinkopf said.

For Clinton, who has battled the perception that she is too close to Wall Street and has been criticized for her past support of trade agreements, the strategy is not without some risk, said former GOP Congressman Tom Davis of Virginia.

As the candidacies of Trump and Sanders have made clear, this is a change election, when many voters are tired of the status quo. While Trump campaigns as a populist, Clinton increasingly seems like the candidate of the establishment, and appearing alongside the super-wealthy could hurt her.

"In an election where people think the country's going in the wrong direction," Davis said, "marching out the wealthiest of the wealthy, I don't think that's how you do the message."