Accessibility links
Review: Of Montreal, 'Innocence Reaches' After 14 albums, Kevin Barnes' music still bursts like an overripe peach. He retains his knack for supple, indelible melody, as well as pomp, melodrama and lavish flourishes of texture and verse. 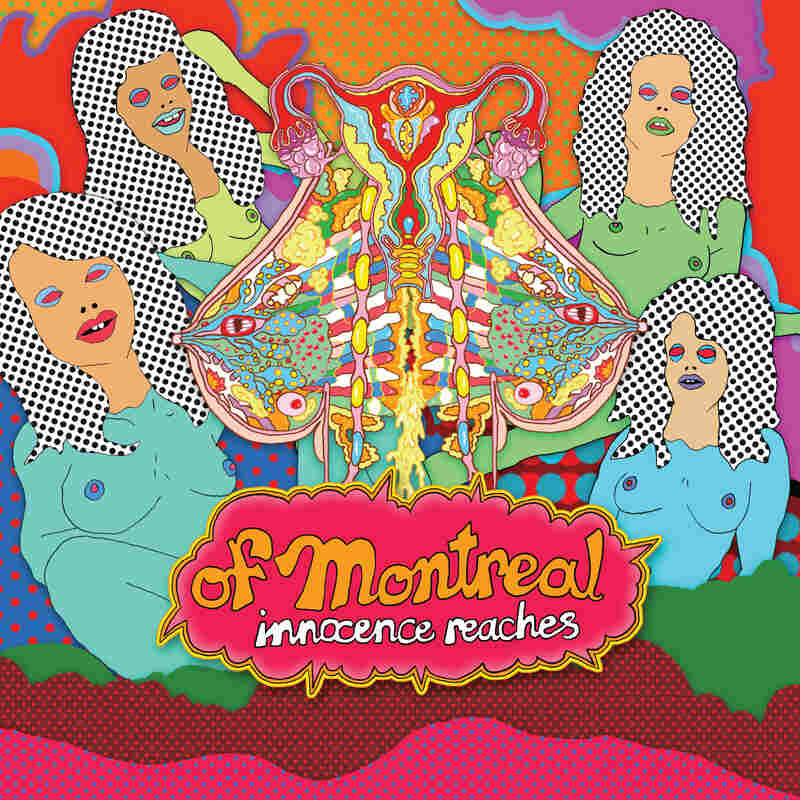 Of Montreal, Innocence Reaches Courtesy of the artist hide caption

When Of Montreal began in the mid-'90s, leader Kevin Barnes' influences were clear: the warm '60s pop of The Beatles, The Kinks and The Beach Boys. The band was, after all, part of the Elephant 6 collective, the same retro-obsessed indie-rock scene that birthed Neutral Milk Hotel, Elf Power and The Apples In Stereo. But as Of Montreal evolved and started releasing record after critically acclaimed record, Barnes absorbed and reflected so much more: deeper psychedelia, icy new wave, grandiloquent prog, electronic dance music and a way to condense dizzying concepts into timeless pop anthems that coquettishly decline to tell you their age.

That artistic flirtatiousness abounds on Of Montreal's new 14th album, Innocence Reaches. "My Fair Lady" flexes its languid funk as Barnes coolly delivers lines like, "My lady's back at home / Cutting herself and sending me photographs." There's a tinge of Prince to it, rich and ornate, though Barnes' precious, faux-British accent is just as pronounced as ever. On the other end of the spectrum, huge garage-rock riffs and Bowie-esque backing vocals propel "Les Chants De Maldoror," a track informed by Barnes' recent stay in Paris following his divorce; there, he spent time soaking up the language as well as the literary atmosphere. Barnes' lyrics have always been a mouthful: "Must I always be chaos arpeggiating?" he sings cryptically in "Chaos Arpeggiating," even as he veers from stadium-sized glam to surfy twang in the span of a single song.

For all its spectacle and swirl, the album does have a focal point. "It's Different For Girls" feels like a conscious attempt at an anthem, and one that may even court controversy. "It's different for girls / From when they are children / They're depersonalized / Aggressively objectified," he sings, part of a litany of observations about the opposite sex, chanted over a winning synth-disco strut which bears a suspicious-yet-welcome similarity to Blur's "Girls And Boys." Not that Barnes subscribes to anything so reductively binary as the idea of opposite sexes: He's no stranger to onstage crossdressing, and to a lesser extent, "Let's Relate" taps into the same spirit as "It's Different For Girls." "How do you identify?" he asks robotically in the song's first lines, as keyboards chime and the low-end churns, the sound coming from some dimension where ELO and O.M.D. share the same bodies.

Through all the genre splicing and experimentation, Barnes' classic pop songcraft shines through. Scrape away all the digital technology and sumptuous effects — not that you'd want to — and there are still Beatles, Kinks and Beach Boys songs bubbling beneath. Barnes' knack for supple, indelible melody, as well as his love of pomp, melodrama and lavish flourishes of texture and verse, have made Of Montreal one of the most consistently captivating bands of the past 20 years. Bursting like an overripe peach, Innocence Reaches is no different.