Accessibility links
'I'll Sell You A Dog' Is Full Of Affection For Art And Artists Juan Pablo Villalobos' third novel is his least absurd (but funniest) yet; this tale of a failed dog taco vender-turned-aspiring author is a reminder that art comes from real people. 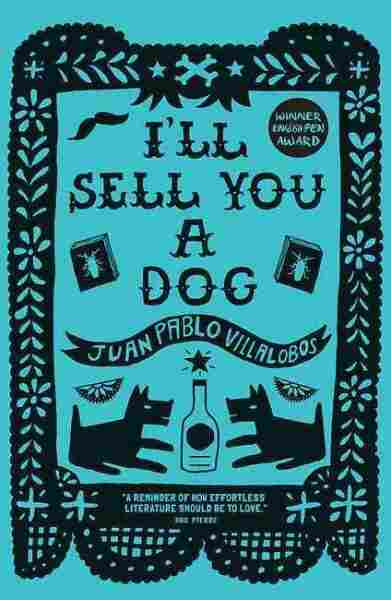 I'll Sell You a Dog

The hero of I'll Sell You a Dog has a lot of problems. His retirement home has two infestations, book clubs and cockroaches. The grocery-delivery boy who used to bring him bootleg whiskey has disappeared. Before his retirement, he was famous across Mexico City for his dog-meat tacos — which he'd have the reader believe were standard issue once upon a time — but no modern-day taco stand will buy dog meat from him now. Instead, they've put the Society for the Protection of Animals on his tail. (Pun intended.) Worst of all, his neighbor Francesca, leader of the retirement-home literary salon, has decided that he's writing a novel, and taken it upon herself to critique his work.

Our hero's main comforts — besides booze — are literary theory and teasing people. He reads the philosophy of Theodor Adorno to telemarketers, and befriends a Mormon missionary just for the pleasure of refusing to convert. "You got here far too late," he says. "We've already had a load of these types: Franciscans, Dominicans, Humboldt, Rugendas, Artaud, Breton, Burroughs, Kerouac. The competition's tough as hell." He's what would happen if the serious young poet at the beginning of Roberto Bolaño's The Savage Detectives grew up to run a taco stand and watch too much Curb Your Enthusiasm.

I'll Sell You a Dog is Juan Pablo Villalobos' third novel, and of the three, it's the least absurd, but the funniest. His debut, Down the Rabbit Hole, featured a drug lord's young son on a quest for a pygmy hippo; it was madcap and heartbreaking at once, but it occasionally went overboard. I'll Sell You a Dog never does. Villalobos has a light touch in this book, and perfect narrative control. He doesn't lean too hard on his jokes and he doesn't push a single character into caricature, which is quite a feat when you consider that this book contains a government functionary named Papaya-Head and a student radical given to pronouncements like, "Roaches are counter-revolutionaries! Everyone knows they're biological weapons of the CIA!"

Villalobos has a light touch in this book, and perfect narrative control. He doesn't lean too hard on his jokes and he doesn't push a single character into caricature.

In this book, everyone's a believer. There's Mao the anti-roach radical, Willem the missionary, Francesca the high priest of literature — and then there's our hero, who wants everyone to think all he cares about is beer, sex, and dog meat, but chooses to be called Teo, as in Teodoro, as in Theodor Adorno. He says he's not working on a novel but stays up late to write. He's haunted by the ghost of the painter Manuel González Serrano, who appears in dream form to critique Teo's work and howl about how he's suffered more than Christ. Teo believes in art. To him it's bigger than religion, bigger than politics, though that's no reason to treat it seriously. What Teo loves, he mocks.

Of course, I'm really talking about Villalobos here. I'll Sell You a Dog is a satire, but it's full of affection for art and for artists. Most of all, it's a reminder that art comes from real people. There's nothing glamorous about sitting down to write a book. Once Teo decides he might be working on a novel after all, he compares it to dog-meat tacos and declares that he doesn't want to write it at all. But he has no choice – he's got a muse, lucky man, and she's blackmailing him. It's Francesca, queen of the literary salon, and she needs new reading material. At the end of the book she gives Teo a choice: Write a novel or she'll have him sent to a care home. Fair enough, he decides. Art's not special enough to refuse. And besides, no one will buy his dead dogs.