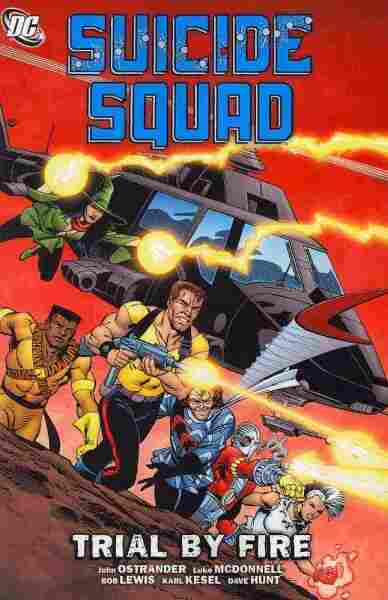 Happily, the creators behind the 1980s comic series Suicide Squad have been getting a fair amount of attention with the release of the splashy new movie it has inspired. Writer John Ostrander created the comic (with artist Luke McDonnell) and Ostrander's late wife, Kimberly Yale, co-wrote it for much of its run. But in all the coverage of the film, Yale has been completely overlooked.

Yale, who died in 1997, was brought to my attention by YA and comic book author Grady Hendrix. As a teenager in South Carolina in the 1980s he was devoted to the comic about bad guys forced by the U.S. government to fight for good.

"DC had been inventing all of these really stupid C-list supervillians for Batman and everyone to fight," he recalls. These characters had goofy names and superpowers—like Captain Boomerang, whose power was throwing a boomerang, or Slipknot, whose power was tying knots. Still, he says, they harbored dark potential.

"They have this cold blooded amoral side," says Hendrix. "And [Ostrander and Yale] started using them in ways that took them more seriously."

"We fleshed them out," Ostrander says. "We tried to give them more depth, more background. We tried to explain them a bit, [so] that you could identify with them."

Hendrix believes that having a female co-writer might explain why Suicide Squad's cast looked completely different from other comics of the era by featuring numerous characters of color, a Catholic, a born-again Christian, a character with disabilities and several powerful women who often served as a given storyline's moral center. It was Ostrander who created Suicide Squad's inimitable boss — a short, 200-pound African-American woman named Amanda Waller, who kept the bad guys in check through plots that often mirrored real-world geopolitical situations. They also reflected the overall shift taking place in comics at that time, from bright and colorful super-powered spectacle towards gritty noir.

Because Suicide Squad's characters were expendable, they could be, and sometimes were, killed off. But Ostrander credits Yale with safeguarding Suicide Squad's female characters, even the ones in relatively small roles, like the staff who work at the prison where the supervillains serve their time. "Kim made sure we were not being stereotypical and giving them panel time," says original series editor Robert Greenberger .

And Yale helped revive a character who started off as marginal, even dopey: Batgirl. After a C-list career that stretched over a couple decades, Batgirl — real name, Barbara Gordon — ended up getting tortured, shot, paralyzed and possibly raped by the Joker. Once that happened, DC benched her. John Ostrander and Kim Yale dug Batgirl out of comic book limbo and rebuilt her as Oracle, the DC universe's information broker and super hacker. Ostrander says Yale built a believable story about female trauma and resilience. She created a complex superhero who realistically used a wheelchair.

"Kim wanted to show how difficult it was to move from a wheelchair just into a car," Ostrander says. "And she wanted us to detail — in every panel, the whole page — the difficulty." She did her research, he says, interviewing people about what using a wheelchair is like.

"She wanted to make sure we got it right."

When Kim Yale died, she was only 43 years old. In the months after her diagnoses, Yale wrote a column for Comics Buyers Guide, about being a feminist in an industry that did not then care about female readers. She wrote about the need for diverse heroes, long before that concept became part of the cultural conversation. And she wrote about her breast cancer for fans of a genre that valued breasts for their size.

Kim Yale is remembered as a trailblazer by friends and former coworkers. But even within the comic world she's not particularly well known. For a while, The Kimberly Yale Award for Best New Talent was awarded every year at San Diego Comic-Con by an organization called Friends of Lulu, an organization promoting women in comics that Yale helped to found. When Lark Pien won it in 2004, she'd never heard of Kim Yale.

"I think I would have liked to meet her," Pien says. When she accepted the Kimberly Yale Award she met dozens of women cartoonists. "It made me feel included and my respect for the larger community grew."

I saw the movie Suicide Squad with Robert Greenberger, the original series' editor, who found it wildly inconsistent, but he enjoyed recognizing the fingerprints of the original comic book team. Even though the character Harley Quin was added later, Greenberger believed that Yale would have liked how she was handled in the film, and Yale would have responded well to Amanda Waller's expert manipulations and machinations. "Kim definitely would've appreciated a lot of the moral threads that were introduced here," he told me.

"Oh god, she would be so excited about it," says John Ostrander. "I'm sure wherever she is, she's bouncing up and down going, 'I want back in! I want back in!'"

Nearly 20 years after her death, Kim Yale is still a powerful part of the comic book industry. Today it's far more common for women to write, draw or create superheroes, even at the major publishing houses. And that, along with Suicide Squad, is an key part of Kim Yale's legacy.