Accessibility links
Massachusetts Joins State-Led Efforts On Equal Pay For Women As part of a state law designed to help equalize pay for women, employers are now prohibited from asking about an employee's previous salary. Advocates say the question creates a cycle of low pay. 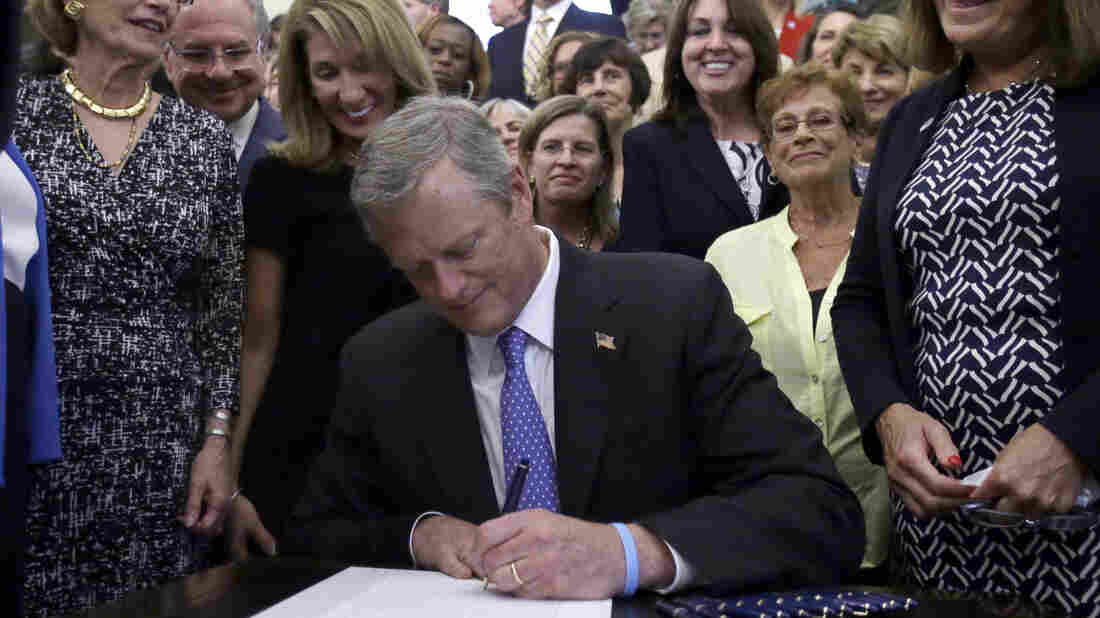 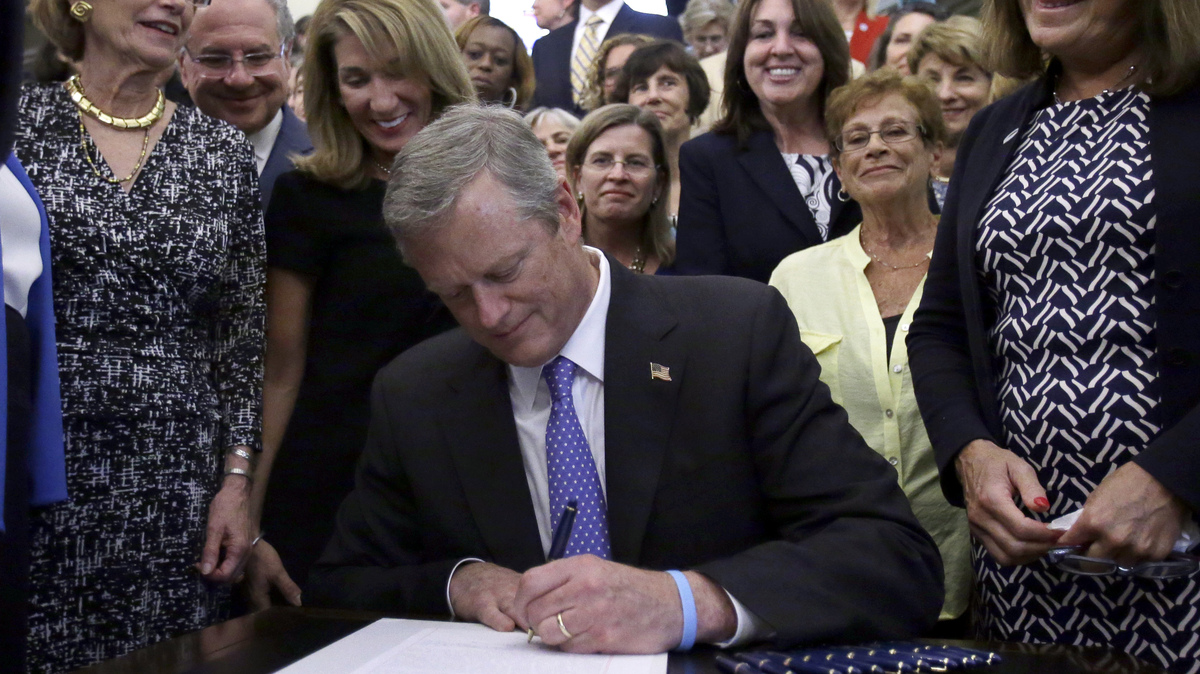 Massachusetts Gov. Charlie Baker signs a pay equity act into law at the Massachusetts State House on Monday in Boston.

Employers in Massachusetts will be barred from forcing prospective employees to divulge how much they were making at their last job. The change, effective in 2018, is part of a sweeping new equal pay measure Republican Gov. Charlie Baker signed into law on Aug. 1.

The law's goal is to prevent women from being stuck in a cycle of low salaries.

"What happens to people over time is if, in that first negotiation — or those first few jobs out of high school or college — you are underpaid, then you really get a snowball effect," says Victoria Budson, who directs the Women and Public Policy Program at Harvard University's Kennedy School of Government and who advocated for the new law.

"If each subsequent salary is really benchmarked to that, then what can happen is that type of usually implicit and occasionally explicit discrimination really then follows that person throughout their career," she says.

Democratic state senator Pat Jehlen was the chief sponsor of the legislation. She says divulging a low salary may prevent someone from even getting the job in the first place.

"We heard about a woman who had had a phone interview for a job, did very well, and didn't hang up at the end of the conference call," Jehlen says. The woman "heard the other people saying: 'She looked like an ideal candidate until we heard what she's making now. She must not be as good as she looks,' and they didn't hire her."

The law also protects employees from retribution if they talk openly about how much they're paid. It's already been illegal under federal law for more than 80 years for employers to impose "pay secrecy." But according to the Institute for Women's Policy Research, about half of employees say talking about salary with coworkers "is either discouraged or prohibited and/or could lead to punishment."

Advocates say that if employees talk with their coworkers about how much they're paid, it's easier to find out when there are discrepancies.

One business group opposed the new law: the Massachusetts High Technology Council. It objected to the presumption that any pay differential is the result of discrimination. The group declined to comment for this story.

But other business groups supported the law, based on a provision that could help companies.

For the first time in the U.S., companies will have new ways to defend against claims of wage discrimination. Under the new law, companies can defend themselves against lawsuits by showing they have taken a look at pay practices and taken steps to remedy disparities.

To Jehlen, that's the most powerful part of the new law.

"I think most discrimination is not intentional," the state senator says. "I think people are unaware of bias or of the causes of bias. And so if they perform a genuine self-assessment looking across the board at what different people are paid, and seeing if there [are] unintentional differentials, they can use that if somebody tries to bring a suit against them."

Massachusetts is one of the pioneers in mandating equal pay, passing its first such law in 1945.

Now, it's part of a national trend, says Vicki Shabo of the National Partnership for Women and Families.

"It's actually the latest in a run of some pretty strong pay-equity laws that have passed over the last year or so in California, in New York, recently in Maryland," she says.

At a time when Congress has been unable to pass an equal pay bill, states are taking the lead.