Accessibility links
Painting Donald Trump As Temperamental, Hillary Clinton Attempts To Flip Gender Stereotype Hillary Clinton's campaign is trying to build a case that Trump is "temperamentally unfit to be president." It's a reversal of something that has long hung over female candidates. 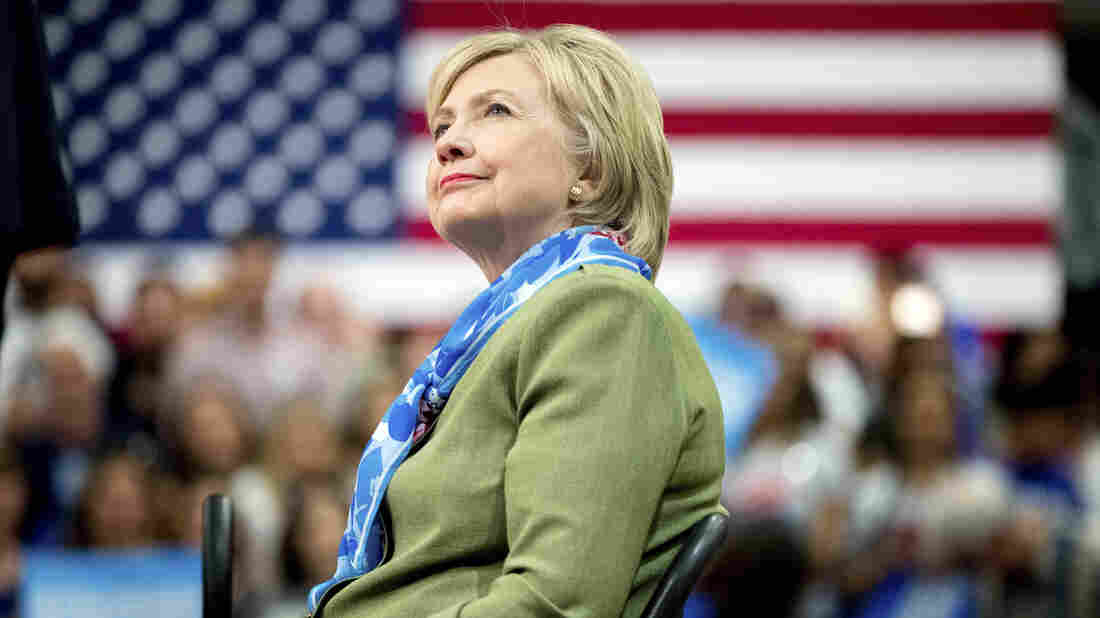 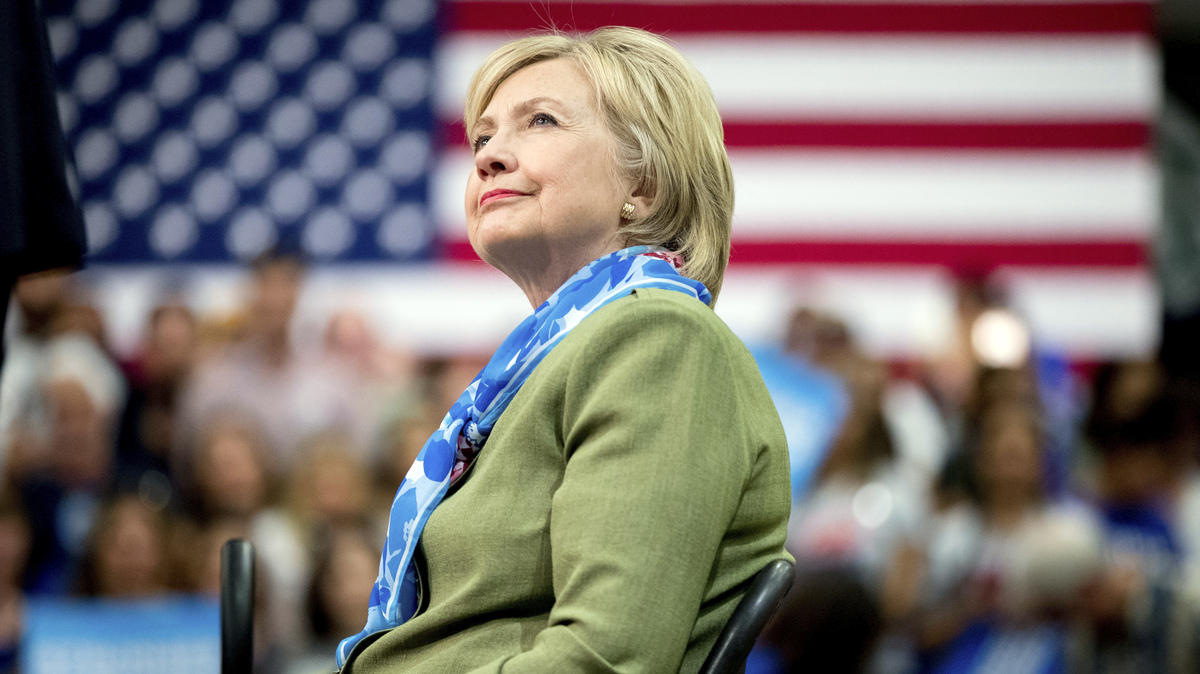 There is an old stereotype about women in politics, one that was articulated by a man named Mark Rudolph back in 2008 on the Fox News Channel in an interview with Bill O'Reilly.

"You get a woman in the oval office, the most powerful person in the world, what's the downside?" O'Reilly asked.

Rudolph's answer: "You mean beside the PMS and the mood swings, right?"

Moments later he said he was joking. But for women in politics, questions or jokes about temperament are familiar.

If I weren't a woman I don't know that I would have been judged as harshly or asked whether I am strong enough to push the button.

"I'm capable of leveling with the American public. I am capable of dealing, again, the hard things I'm willing to do," Ferraro said in a documentary about her run. "I don't know if I were not a woman, if I would be judged in the same way in my candidacy, whether or not I would be asked questions like 'Are you strong enough to push the button?'"

In September 1987, Democratic Congresswoman Pat Schroeder ended her short run for president with a sun swept speech to supporters in Denver Colorado. When she announced that she would not be a presidential candidate, the crowd reacted with emotion.

"There was this huge sigh, which really got me," Schroeder recalled.

In that speech nearly 30 years ago, she went on, "We're going to go on to help this great city, this great state and this great country."

That's the moment when her emotion got to her. Her voice broke. She got out a tissue and leaned on her husband who encouraged her to take a moment before she soldiered on.

"I choked for a few minutes and shed a few tears," Schroeder remembered. "And oh my goodness, the end of the world happened. I mean, people were like that's it. That's it. We can never have women. They are just so emotional." 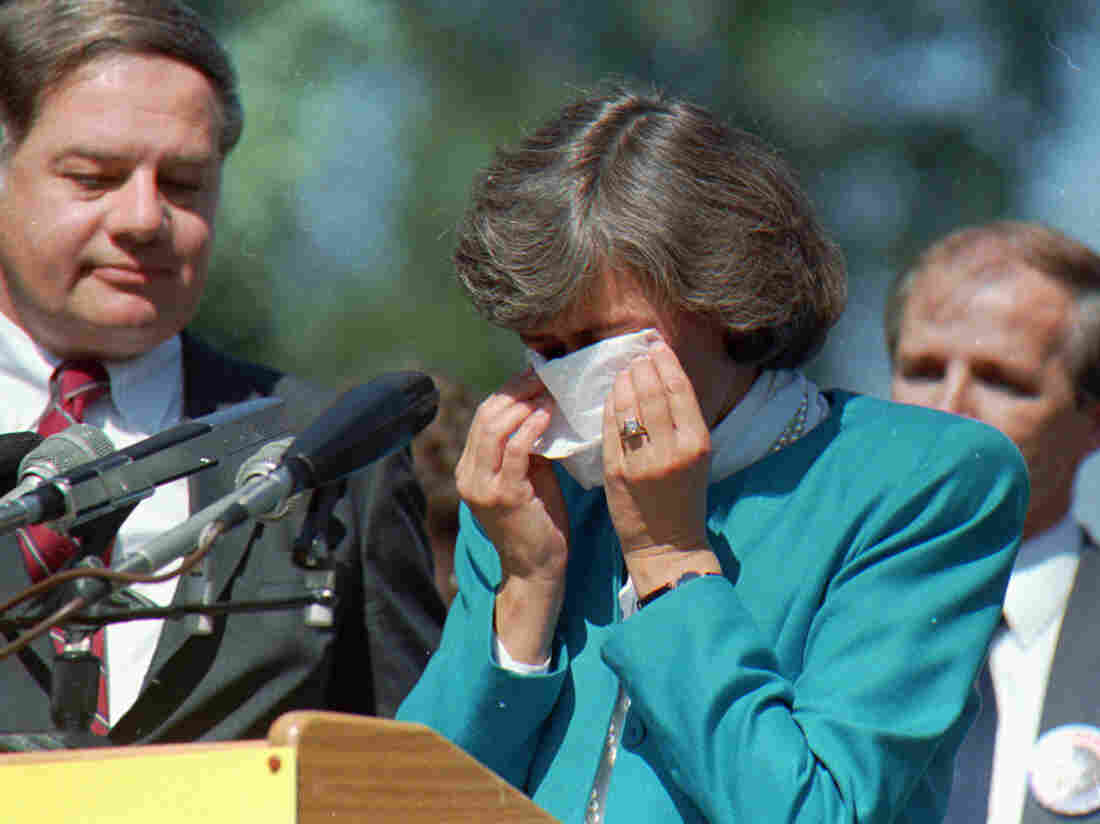 Former U.S. Rep. Patricia Schroeder wipes away tears after announcing she would not seek the 1988 Democratic presidential nomination at a news conference on Sept. 28, 1987, in Denver. Aaron Tomlinson/Associated Press hide caption 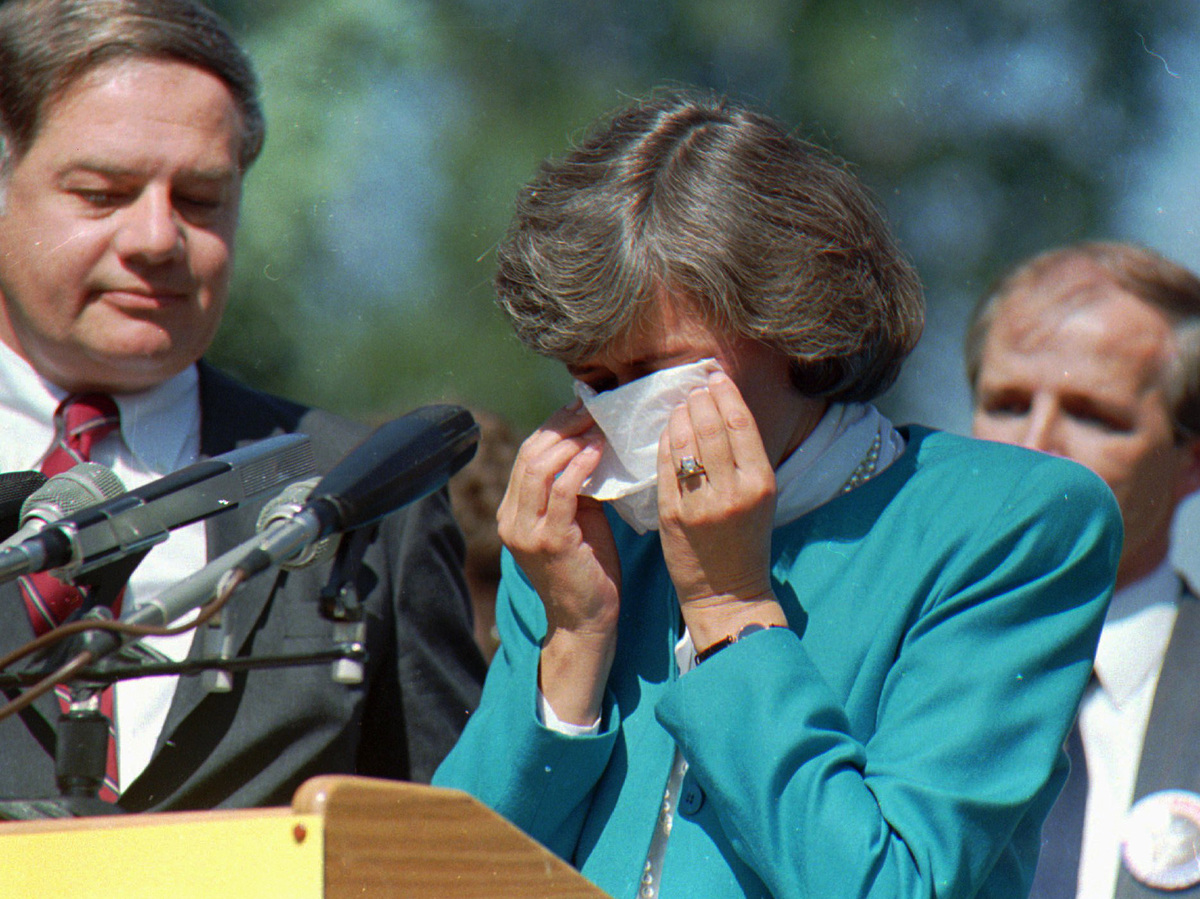 Former U.S. Rep. Patricia Schroeder wipes away tears after announcing she would not seek the 1988 Democratic presidential nomination at a news conference on Sept. 28, 1987, in Denver.

Schroeder is good humored about it now, but back then she started a file, keeping track of every time a man in politics or sports cried and it didn't cause an uproar.

Now, she watches Hillary Clinton's campaign against Donald Trump with some delight as Clinton attempts to flip the script on the idea of the unbalanced, hysterical woman. She's not the volatile one, she says, he is.

LISTEN: At The DNC, We Asked Women Why They Were Voting For Clinton

In almost every speech, Clinton delivers some variation on this line of attack. Her address at the Democratic National Convention was no different.

"You really think Donald Trump has the temperament to be commander in chief?" Clinton asked the crowd, who responded with an emphatic "no."

"A man you can bait with a tweet is not a man we can trust with nuclear weapons," she went on.

And Clinton isn't the only one hammering home this idea. Leon Panetta, Doug Elmets and Michael Bloomberg did too in their DNC speeches.

Can you imagine if Hillary spent 90 percent of the time defending herself against anything anyone said about her. People would say, what is the matter with her?

A spokeswoman for Donald Trump says his temperament is "phenomenal." Meanwhile, Clinton casts herself as the candidate with a steady hand.

You won't find anyone happier about this role reversal than Pat Schroeder.

"Temperamentally unfit doesn't just fit for women," she said. "Can you imagine if Hillary stood up and gave the same kind of speech, where she spent 90 percent of the time defending herself against anyone who said anything about her. People would say, what is the matter with her?"

But the question is whether the stereotype of the hysterical female candidate is being put to rest in 2016 or whether it's just this particular race and these particular candidates.