Accessibility links
Some Bernie Sanders Supporters Finding A New Home Within The Green Party The former Democratic candidate may have been mentioned more than the Green Party's own presumptive nominee, Jill Stein, at the third party's convention this weekend in Houston. 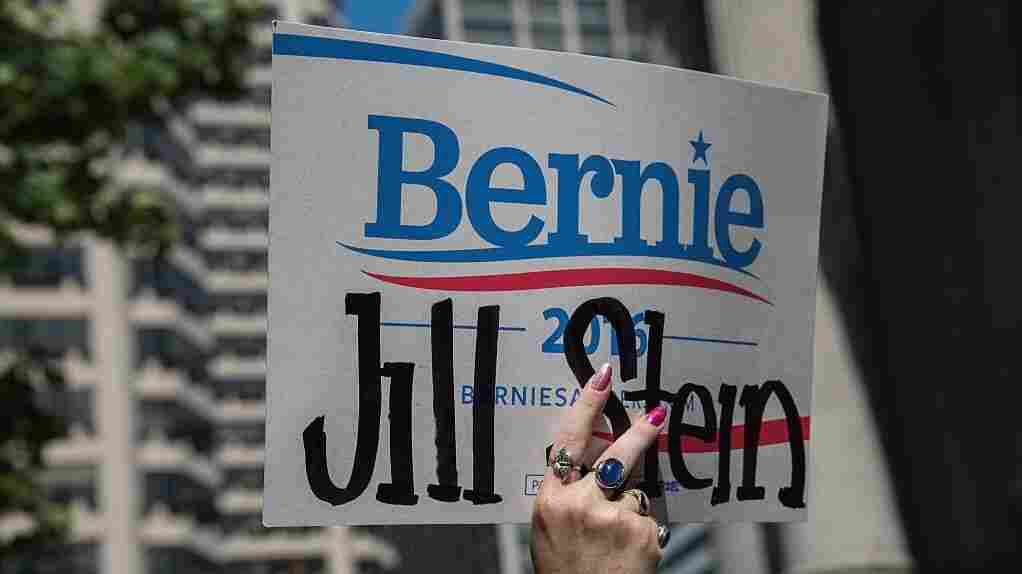 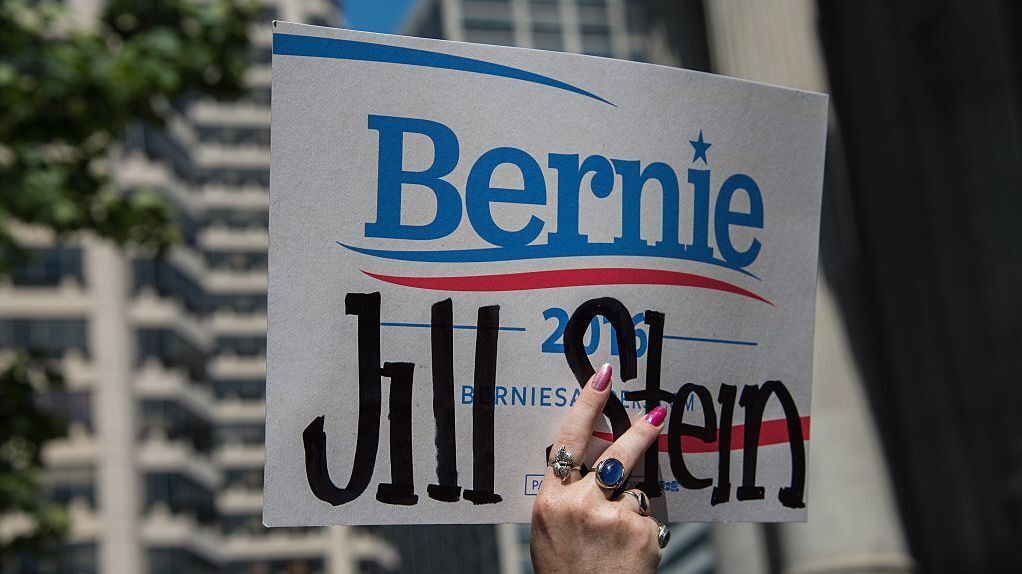 A supporter of Green Party candidate Jill Stein holds a doctored Bernie Sanders sign at a rally at City Hall in Philadelphia during the Democratic National Convention last month.

At the Green Party national convention in Houston, Bernie Sanders may have been mentioned more often so far than the party's own presumptive nominee, Dr. Jill Stein.

The progressive third party has a rare opportunity to expand its reach by picking off disaffected supporters of the Vermont senator. The group had planned to have about 250 people at its quadrennial gathering, but organizers said in the past few weeks interest exploded and that now more than 500 people are expected.

An opening reception Thursday evening featured a speech from Yahne Ndgo, a vocal "Bernie or Bust" supporter who has now found a home in the Green Party. She said the Democratic National Committee rigged the Democratic primary in favor of Hillary Clinton.

Libertarian Candidates Pitch Themselves As Antidote To Partisanship

"Are you going to try and go inside there and reform this party that has demonstrated in every way, with every opportunity, that they really do not give a flying f*** about one thing that you care about?" Ndgo said to rousing applause. "Or are you going to open up your mind to the possibility that there is something in place, a national organization that's already in place that actually wants to hear from and represent your needs, your interests and your leadership? To me, it's not a hard decision."

Margaret Flowers, who's running on the Green Party line for Senate in Maryland, said the primary purpose of the weekend was to officially nominate Stein and her running mate, Ajamu Baraka, Saturday afternoon. But she acknowledged at a press conference Thursday that the gathering was also a chance for disaffected Sanders supporters to hopefully find a new home.

"It's an opportunity for Greens to be together and for new people to learn about the Green Party and our values," Flowers said. "I think the new people will find the GNC is very different from the RNC or the DNC. We're real people. We're people who really care."

Andrea Mérida Cuéllar, one of the party's national co-chairs, said the current election was "unprecedented" and that the "shenanigans" in Philadelphia at the Democratic National Convention had sparked new interest in their decades-old party.

"It is ever more crucial for us as a third-party entity, for us as a Green Party, to prepare ourselves and present a home for those people who have said enough is enough," she said.

It is ever more crucial for us as a third-party entity, for us as a Green Party, to prepare ourselves and present a home for those people who have said enough is enough.

"We're very excited by this challenge, we welcome folks, like-minded who really see what has happened, the disaster of politics at the RNC and DNC. We open our arms and we're ready to get to work and further that 'political revolution,' if I can appropriate that phrase," Cuéllar continued, in a nod to Sanders' rallying cry throughout his campaign.

Vanessa Tijerina said she was inspired by Sanders to get involved in politics. But when it became evident to her that the presidential hopeful wasn't getting a fair shake in the Democratic primary, she decided to run for office herself for an open congressional seat in the Texas Rio Grande Valley. She's had her mourning period over Sanders, but says she's re-energized by her newly adopted party and Stein as her new candidate.

"I stood by [Sanders] and I understood that on that fateful day during the DNC, that eventually we were going to find out where the movement was going to go. I had already accepted that Bernie had decided not to follow everybody else," Tijerina said. "That's the thing — we just go with the movement. The movement is not a person. I thank Bernie for opening up my eyes. Were it not for Bernie, were it not for his rhetoric for his efforts — he inspired me to run for office."

Suzanne Simmonds, from Houston and another former Sanders backer, said Stein had helped fill the void for her after Sanders withdrew and endorsed Clinton.

"I miss him so much, and I'm very thankful that Jill is able to come into the fold and take all these people that worked so hard for Bernie, to take them under her wing, and that now we have somebody else to support other than the capitalist and the fascist," she said.

Simmonds said she would have previously considered herself a Democrat and did vote for President Obama twice. But no one had ever inspired her to get active in a political campaign until Sanders.

Bernie's the one that got me into this race... I'm going to continue this revolution without him. Thank you for igniting us, but it's time to stand down and let us continue this.

"I had never felt this strongly about a candidate before in my life before, I'd never donated money before," she said. "I think a lot of us are brokenhearted, but the fact that we have Jill gives a lot of us hope, that maybe we can change things. That a protest vote will count, and maybe we can get some of her candidates elected locally.

Ed Higgins led a "DC to DNC" march with 25 people last week — walking the 140 miles from the nation's capital to Philadelphia over nine days to protest Clinton's nomination.

"I'm always going to be Bernie. Bernie's the one that got me into this race. What I believe is that the Democratic Party is run by corporate terrorists," Higgins, who considers himself a political independent, said. "So we are supporting a Green Party because they actually are inclusive of everything that we believe in.

Higgins said he's found the Green Party welcoming as well, and that what Sanders began, he and others are committed to finishing.

"I'm going to continue this revolution without him. Thank you for igniting us, but it's time to stand down and let us continue this," he said. "Bernie wanted a political revolution — we want an actual revolution. What does that mean? It means no bullet will be fired, no bomb will be dropped, but we will take back our country because our movement is that strong."

Carlos Martinez of Houston started the "Viva Bernie" Facebook community and said his most of his 71,000 followers wanted to continue with Stein the "revolution" that Sanders started.

"You're always disappointed when you support something and it doesn't go your way, especially when you have an option like Donald Trump and Hillary Clinton, who are both atrocious candidates," Martinez said.

Now he'll be working online and through social media to "mobilize the masses" for Stein "in a much faster, quicker, compressed way because our time is short."

But it's still a tough climb for the Green Party to make in just a few months. In order to get into the debates this fall, Stein has to reach 15 percent in national polls. An NBC/Wall Street Journal poll released this week showed her at 5 percent. That same survey showed that Clinton has shored up support from 86 percent of former Sanders supporters.