Accessibility links
These 250-Plus Violins Are About To Be Owned By The U.S. Government American-made violins are often regarded as inferior to European ones, but guitarist David Bromberg knows their value. So does the Library of Congress, which is acquiring his impressive collection. 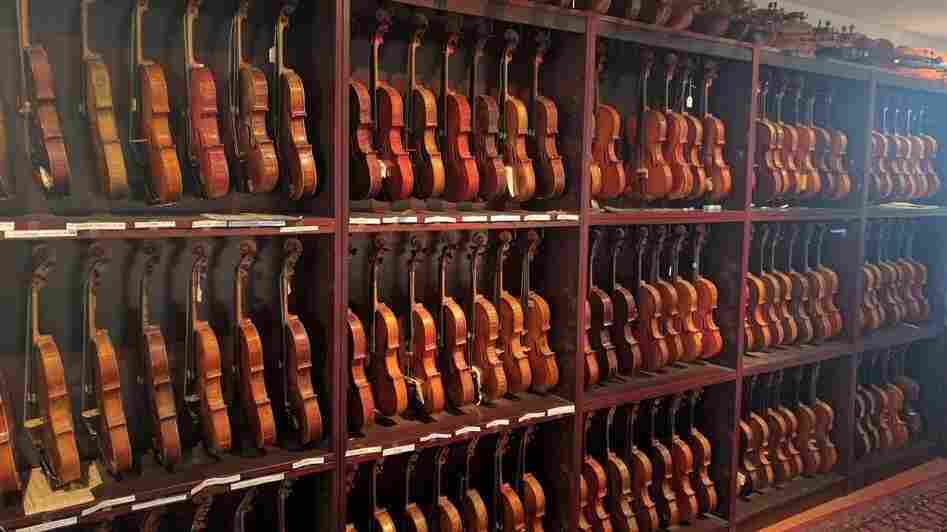 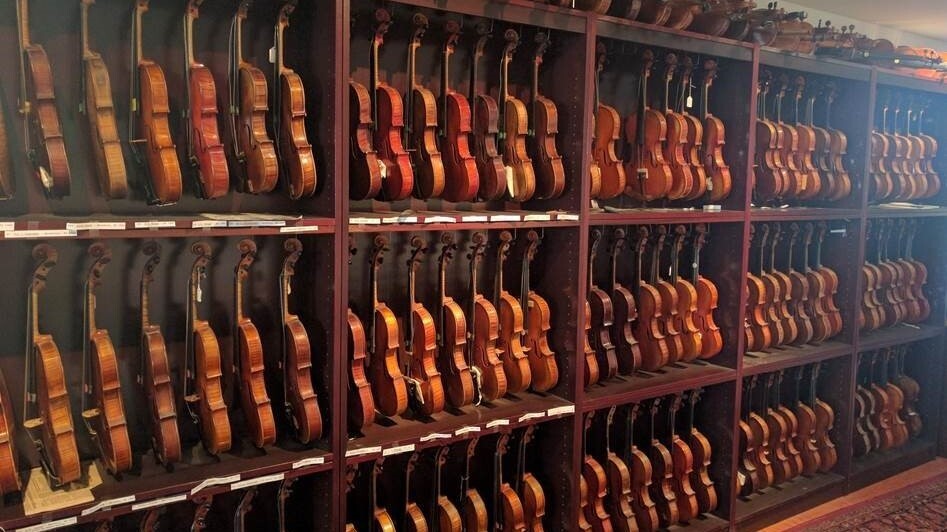 Just part of David Bromberg's collection of more than 250 American violins, crafted by nearly as many makers.

David Bromberg is best known as a guitar virtuoso, who has collaborated with Bob Dylan and George Harrison and fronted his own band. But he's also a collector of American violins, and his collection is such that the Library of Congress has announced its intention to acquire it.

Bromberg started collecting violins in the late 1960s. "As a traveling musician, I'd always go to the violin shops if there were any wherever I was and I'd say, 'I collect good American violins,' he recalls. "As like as not, they would literally laugh in my face."

That's because many view American violins as second-rate compared to their European counterparts. But violin-maker Jan Strick, who heads the International Association of Violin and Bow Makers, saw some of Bromberg's violins at an exhibition in Paris and was impressed. In Europe, he says, "we were all very surprised seeing those beautiful American violins because we didn't have a clue that there were nice violins made on the other side of the ocean."

There are 263 violins in Bromberg's collection by nearly as many American makers. Most of them hang on the walls of his home in Wilmington, Del., but the most valuable are kept in a steel vault in his office. Inside, Bromberg picks up a violin made in 1860 by a German-born immigrant to New York. It's an instrument by George Gemünder, who is sometimes thought of as the first great American violin-maker. Bromberg contends that, with the exception of Antonio Stradivari, no one carved the scroll — the decorative end of the violin's neck — better than Gemünder.

Next, he brings out a violin made by Simone Fernando Saconi, who learned his craft in Italy and came to the U.S. in 1931. Saconi studied in Rome with a maker named Rossi, starting out by sweeping the floor of Rossi's shop. After Saconi started making violins, Rossi quit.

Bromberg has been thinking about selling his collection for a couple of years. He hoped the Library of Congress would want all of the violins, but he also asked the library's curator, Carol Ward-Bamford, whether he should sell a few of them individually.

"I said to David, 'I'm not interested if the whole collection doesn't come here. I just want the whole thing or nothing,' " Ward-Bamford says. "I've never wavered from that because that's how the story will be told and kept."

Bromberg says it's an important story to tell. In fact, he says unscrupulous dealers will take fine American violins and give them fake documentation claiming they're Italian, so they can sell them for more money. He has two violins in his collection by a maker named Walter Solon Goss, one of which may be Goss' last violin, made for his daughter in the 1920s. "This violin for all the world looks like a small-town Italian violin, and that it's in the collection is its only protection," he says. "If it got into circulation, before too long it would get an Italian label and pass."

The Library of Congress plans to raise $1.5 million to acquire the collection and tell their story as part of a new center for the study of the American violin. For Bromberg, the significance of his instruments lies not in where they will live, but whose lives they stand to affect. "The fact that there will be all of them in the Library of Congress — they'll all still be together, they'll all be available for study," he says. "It's the only memorial that hundreds of American violin-makers are going to have."