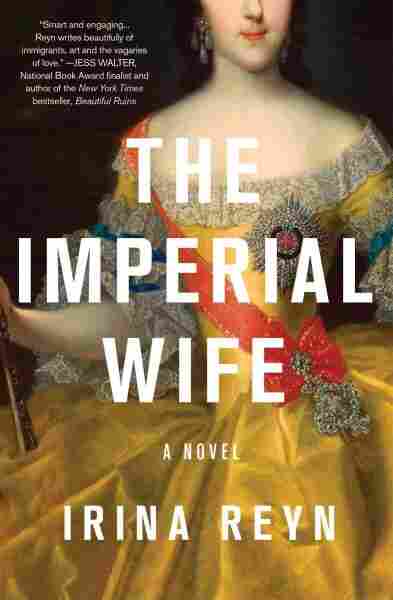 With Hillary Clinton having made history last month by becoming the first female presidential nominee, could it be that today's gender roles are not as egalitarian as we think?

Irina Reyn's new novel, The Imperial Wife, raises such questions. The dual-narrative follows the marriages of two ambitious women immigrants: one, a rising Russian art expert in a high-end Manhattan auction house set in the present day; the other, a young Catherine the Great in imperial Russia.

You'd think the marriage set in contemporary New York is the modern one, but Reyn says she saw flashes of modern life in Catherine the Great's story.

While digging through the empress' memoirs, the author — a Russian immigrant herself — saw flashes of both her own biography and that of another contemporary figure. She says a thought occurred to her: "The way that we talk about Hillary Rodham Clinton is not so different, have we really come that far in 300 years?"

The modern woman, Tanya Kagan, is a bright, confident Russian immigrant, about to go into the biggest auction of her career — a glorious medal worn on a sash by Catherine the Great. But it's Catherine who rejects marital expectations and gives birth to kids who aren't Peter's, while Tanya longs for her husband's approval.

I was reading Catherine the Great's memoirs and was thinking, my goodness, the way that we talk about Hillary Rodham Clinton is not so different. Have we really come that far in 300 years?

Even though centuries separate their worlds, the two female protagonists find themselves in a similar difficult marital dynamic: Both women wrestle with having an ambitious nature, while being tied to expectations within the confines of marriage.

Or, as Reyn puts it: "They were both women who had these innate strengths and partly because they had to overcome these obstacles of coming to this new place and adjusting. And more than adjusting — flourishing."

On the Catherine the Great character as a more modern woman

Yes, which is very ironic, isn't it, 300 years later, that we're sort of in a more conservative place? I mean the reason I was conceiving of this Catherine the Great story, it was in 2008 after my first book came out and I was just watching Hillary Rodham Clinton and her bid for the Democratic nomination, and I have to say I was reading Catherine the Great's memoirs and was thinking, my goodness, the way that we talk about Hillary Rodham Clinton is not so different, have we really come that far in 300 years? And just thinking about the distrust, the threat of the powerful woman, was something that just spurned the first sort of germs of this book.

On whether the stronger, married woman needs to make an effort to protect her husband's ego

It's certainly hard to speak about this globally and I think that that's why in the book I made her an immigrant because, well, I can't speak for how this would work with women who are even more American than I am, born here, but I just knew that protecting male egos is something that is very much ingrained in a patriarchal culture. There's something to be thought about, evening out the power structure a little bit more, and interestingly enough, in the Catherine the Great section, she doesn't really do that. ...

But these are women facing similar situations in their marriages, but I think they're so much more competent than the men around them. But it's the men who are being handed all these opportunities, whether they're worthy of them or not. And I think that these two women are dealing with that issue in their own way.

On which of the two female protagonists is a role model

I don't think I could write fiction with the idea of a role model. I think that they're both women that are so much of their own time that are grappling with having these innate strengths. And what I found really fascinating about Catherine is when I realized, wait a minute, she's kind of an immigrant like me. She came at 14 years old; I came when I was 7. She's also had to sort of assimilate in this new culture and learn a new language, a new religion. Of course I only had to learn a new language and make friends at school, she had bigger problems, but sometimes being an immigrant means you have to tap into certain kinds of strengths.