Accessibility links
Who Let The Dogs In? More Companies Welcome Pets At Work We'd all rather work with our dogs, wouldn't we? More employers are allowing pets on the job, although sometimes that entails navigating a different kind of office politics. 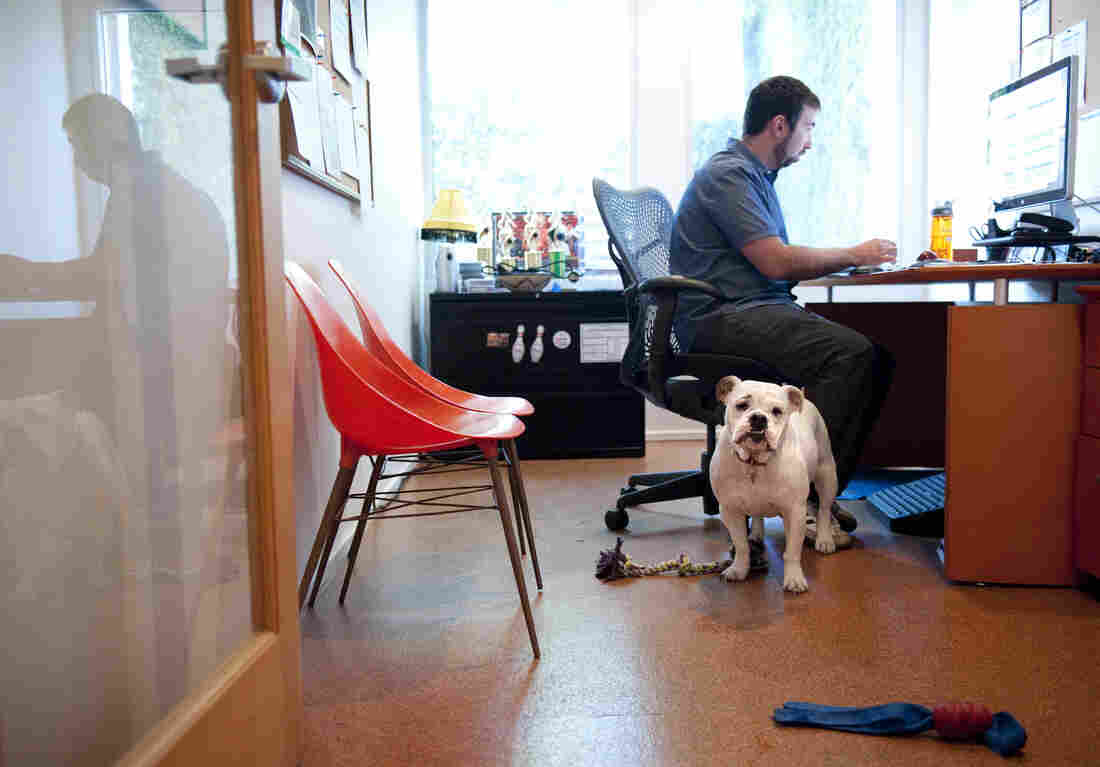 Ginger, an English bulldog, stands watch while at work with her owner, Will Pisnieski, at Authentic Entertainment in Burbank, Calif., in 2012. According to the Society for Human Resource Management, 7 percent of employers allow pets at work. Grant Hindsley/AP hide caption 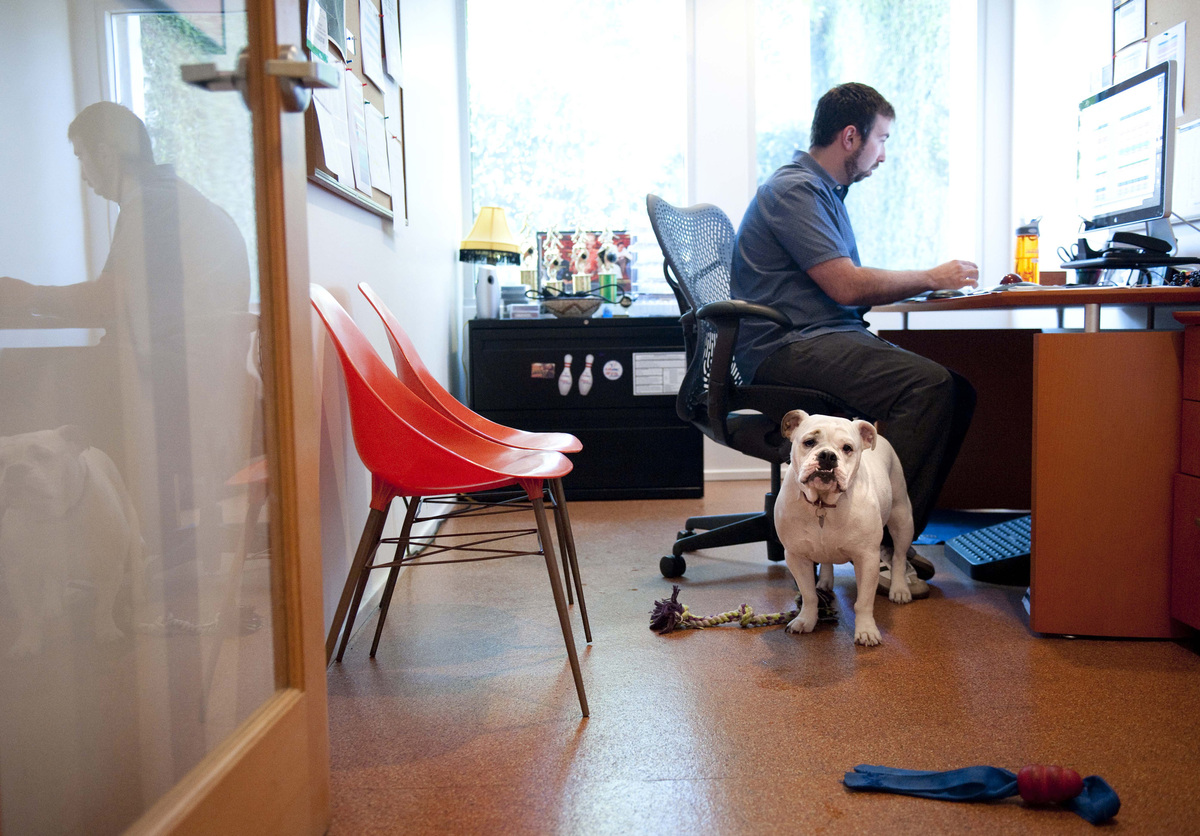 Ginger, an English bulldog, stands watch while at work with her owner, Will Pisnieski, at Authentic Entertainment in Burbank, Calif., in 2012. According to the Society for Human Resource Management, 7 percent of employers allow pets at work.

Charlie is an ideal colleague. He's energetic, knows how to handle bullies and has serious people skills. His work mostly entails riding on a cart pushed by Kim Headen, who fills orders in the warehouse at Replacements Ltd.

"He loves coming to work," Headen says. "He beats me to the door when we pull up in the parking lot. He knows his way in and to go exactly where I sit."

Charlie is a Yorkshire terrier. He's among the 400 people and about 30 animals who come to work at Greensboro, N.C.-based Replacements, where other varieties of fauna regularly come to visit.

"We've had customers bring in a duck, a potbellied pig, a possum," says public relations manager Lisa Conklin, who hopes to bring her horse, Azim, to work one day.

But consider this: Replacements makes and sells fine dining ware.

For These Cosplayers, Geeky Costumes Are The Cat's Pajamas

According to the Society of Human Resource Management, 7 percent of employers now allow pets to come to work with their owners. That's up from 5 percent five years ago.

Benefits managers say it's a nonfinancial benefit that speaks to the growing demand among workers for work-life balance.

Conklin agrees. She says the pets-at-work policy costs the company nothing, and staff often say it's their favorite perk. Conklin also says it helps with employee retention, too, though longevity can become bittersweet. 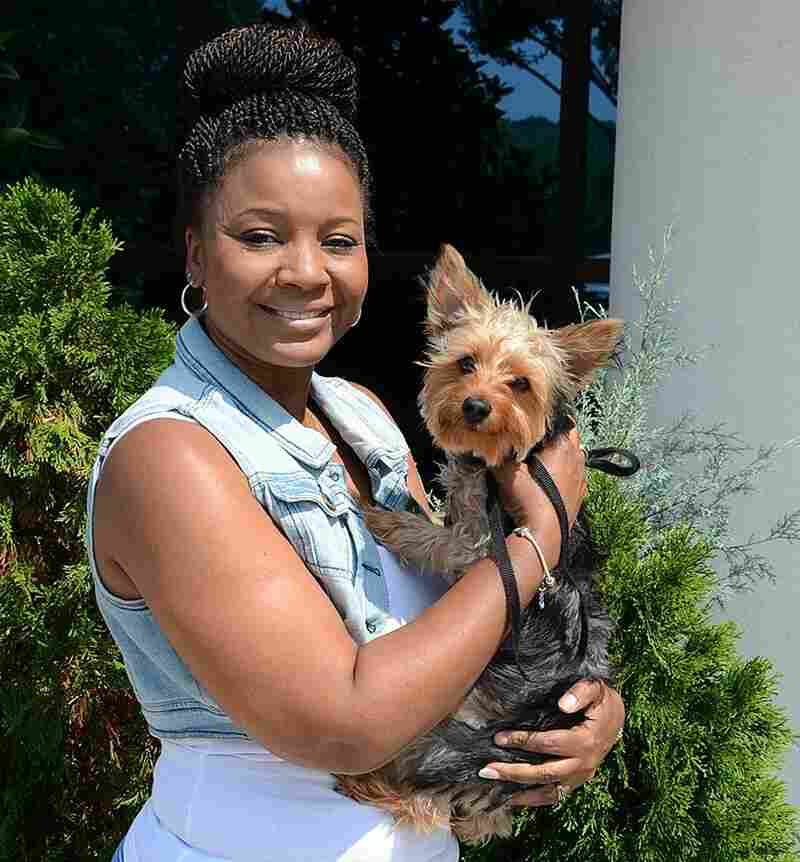 Kim Headen fills orders in the warehouse at Replacements Ltd. and brings her Yorkshire terrier, Charlie, to work. The company currently has 400 employees and 30 animals that come to work. Courtesy of Kim Headen hide caption 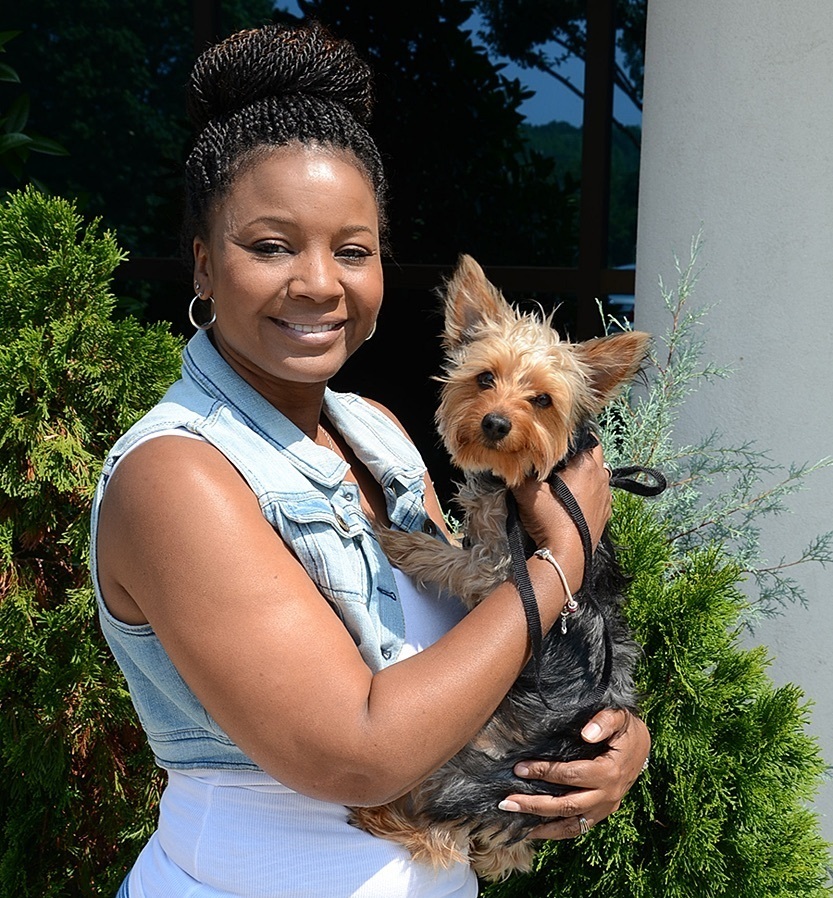 Kim Headen fills orders in the warehouse at Replacements Ltd. and brings her Yorkshire terrier, Charlie, to work. The company currently has 400 employees and 30 animals that come to work.

"It's oftentimes very emotional, because sometimes you see someone come in with a puppy and you watch that dog go through its life," Conklin says, her voice cracking. "And then unfortunately sometimes we lose them, and it's amazing to see that lifespan of that dog here at work."

"They tend to see that the dogs increase co-worker cooperation and interaction, particularly when people would go by and see the dog just to visit," says Randolph Barker, a professor of management at Virginia Commonwealth University.

(Yes, that is his real name. "You know, we've always been teased about that," Barker says. "But I've had that name all my life, and it's legitimate; we didn't change it because of the research.")

Barker's 2012 research measured levels of cortisol in workers' systems and found that people whose pets came to work saw a decrease in stress throughout the workday, whereas those who didn't have a pet saw their hormones increase.

Pet-food maker Purina has long had a pets-at-work policy — one that requires animals to be civil and well-behaved, among other things.

Kurt Venator, director of veterinary services for Purina, says a successful policy must be planned in advance and accommodate co-workers' wishes — including pet allergies. And, he says, recognize that the first day on the job might be tough on your pet.

"They encounter novel things, such as revolving doors or elevators," Venator says.

Barbara Sobel sports cat tattoos and is adamant about her love of felines. There are two that live in the offices at Good Scents, a shop in Cape May, N.J., where she works. She says cats make for great colleagues.

"I get greeted every morning. I can bounce ideas off of them on projects. They don't judge me," she says and laughs.

But has a cat allergy ever got in the way of hiring?

Should We Really Be Keeping Cats And Dogs — And Geckos — As Pets?

"You know what? In all the years that I've worked here, and everyone who's come through our doors, that's never been a problem," Sobel says.

In the case of Buchanan Public Relations outside Philadelphia, Lacey — a Rottweiler mix — was terrorized by Romeo, a toy poodle.

"He had a bit of a Napoleon complex," explains Assistant Vice President Nicole Lasorda.

Instead of reneging on the pets-at-work policy, the company's owner, Anne Buchanan, hired a dog trainer to sort things out. Romeo ceded some territory, and workplace harmony was restored.

Lasorda says the pet policy is a big priority. A year ago, when the company looked for bigger office space to rent, the policy posed a challenge.

"Every place she went when they said no pets, it was off the list," Lasorda says. "And there were a lot of places that were no pets."

Instead, the company bought its own building, and the animals still come to work.