Accessibility links
'Playing Dead' Author Elizabeth Greenwood: 3 Steps To Faking Your Own Death Elizabeth Greenwood has spent a lot of time researching the death fraud industry. She says the hardest step for many aspiring fraudsters would be cutting all ties with friends and family. 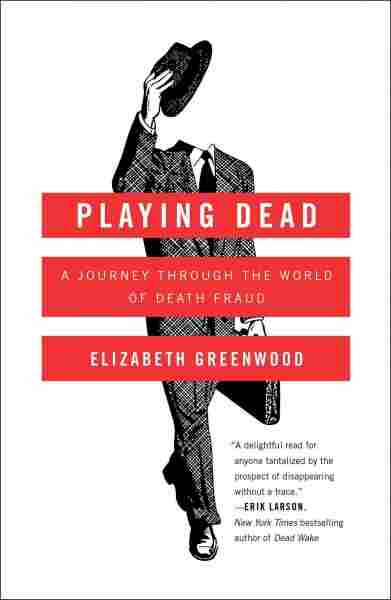 A Journey Through the World of Death Fraud

A few years ago, writer Elizabeth Greenwood went on a trip to the Philippines where, on the afternoon of July 7, 2013, she died. "My death certificate indicates that I perished in a car crash," she tells NPR's Audie Cornish.

Clearly, Greenwood didn't actually die, but she did spend a lot of time researching how to make the world believe she did. Faking your own death, or pseudocide, is the subject of her new book, Playing Dead: A Journey Through The World of Death Fraud.

Greenwood started thinking, hypothetically, about pseudocide when she was staring down a six-figure student loan debt. In the course of her research, she spoke to an investigator who tries to expose fraudulent deaths and an expert who helps people disappear. Both agreed on one point: It's not worth it.

On the three steps to faking your own death

The first step is really planning that accident, whether it's going to be staging a suicide, like someone I spoke to for the book, Sam Israel, who was a hedge fund manager. And he had lost half a billion dollars of investor money and he staged his suicide off the Bear Mountain Bridge. He staged a jump and actually caught himself in construction nets that were hanging beneath the bridge and managed to scramble to the other side of the embankment to freedom in an RV, where he lived for several weeks.

You really have to be able to cut all ties, never look back, to leave behind all the parts, good and bad, of who you are. And that is a very tall order, and I think for most people nearly impossible.

The second [step] is to have a place to go, a place to hide, enough cash on hand to sustain yourself without having to rely on credit cards or other methods that might indicate where you are.

And the third thing is really just being able to cut off all ties and communication with friends. Marcus Schrenker, who was a money manager from Indianapolis, he staged a plane crash and he had actually emailed a friend two days before detailing his plan. So he was only presumed dead for, I think, up to 48 hours. So [keep] your lips sealed. ...

You really have to be able to cut all ties, never look back, to leave behind all the parts, good and bad, of who you are. And that is a very tall order, and I think for most people nearly impossible.

It depends why you're faking your death. So if you, for example, have just absconded with millions of dollars of your investors' money and you have the Securities and Exchange Commission hot on your tail, they might be looking for you. If you're committing life insurance fraud over a certain dollar threshold and, you know, you can't produce a body straight away, then there are investigators who the insurance companies will send out to prove that you are not in fact dead. So it really depends on what your motives are and then what ancillary crimes you've attempted.

On acquiring her own death certificate in the Philippines

A Mortician Talks Openly About Death, And Wants You To, Too

I'd heard about the Philippines all through my research. I'd heard that there are black market morgues where unidentified people are brought in and kept on ice and then death fraudsters will go to the morgues and buy these bodies very cheaply, have them cremated immediately and then try to pass off the cremains as their own. So I was very excited to visit the Philippines.

While I was there, I was able to acquire my own death certificate and accident report detailing my fatal car crash. And the whole way leading up to that moment I wasn't that nervous. And then when I actually opened up that manila envelope and held this very clinical government document in my hands that said I'd died on arrival at this hospital on this date, it was very, very chilling. And it really all kind of became very real. In a way, it had just been theoretical up until then.

On why pseudocide isn't victimless

For me, it was really when I met family members who had been involved in a parent's or loved one's pseudocide where that message of the darkness of this plan really hit home to me. ...

I spoke to a woman who had been under the impression for her entire life that her father had died when she was a toddler. She never really knew him. One of the only artifacts she had of his life was this photograph of a Corvette that he was known for. And a friend of hers was over for dinner and asked about it, and she said, "Don't you ever think about your dad?" And something kind of sparked an interest in her that night and she went and Googled her father's name plus "Corvette" and lo and behold an interview on a website dedicated to [Andy] Warhol stars — which he had been a very minor one in a film called San Diego Surf — appeared. And this interview was dated [2007]. She couldn't believe it, and just a few months later she found his very real obituary that had come out — that he had passed away in very recent history.

So, just that deceit, just having to revise your entire biography and everything you knew of yourself, that was very troubling to see.