Accessibility links
Election 2016: Donald Trump's 'Second Amendment' Comment Fits A Pattern Of Ambiguous Speech Trump has repeatedly made statements that push the boundaries of acceptable political discourse, but that are often open to interpretation. 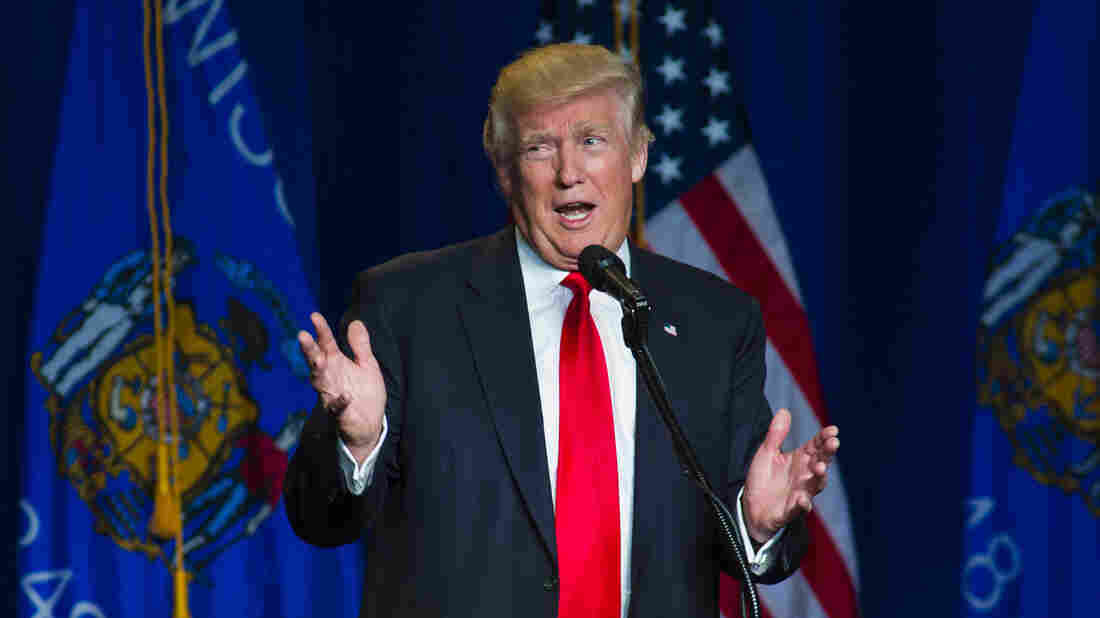 Donald Trump's suggestion that "maybe there is" something Second Amendment supporters could do to stop his Democratic rival from picking Supreme Court justices caused outrage among those who read it as an incitement to violence.

Trump says he was merely talking about the political power of gun-rights advocates and the National Rifle Association to defeat Hillary Clinton. But it's far from the first time the Republican nominee has made a statement that seems open to sinister interpretations.

As we've noted before, Trump has repeatedly made public comments that have seemed to many observers to push or violate the boundaries of acceptable political discourse in the United States.

Just a couple of weeks ago, the real estate developer held a press conference in Florida where he suggested that Russian hackers should look for emails missing from Hillary Clinton's time as secretary of state.

"Russia, if you're listening, I hope you're able to find the 30,000 emails that are missing," Trump said.

Pressed by reporters on whether he was concerned about the idea of Russians looking at private State Department emails, Trump said he was not. He did not clarify his remarks until later, after the Clinton campaign accused Trump of encouraging Russian hacking.

Initially, Trump's spokesman, Jason Miller, tweeted: "To be clear, Mr. Trump did not call on or invite Russia or anyone else to hack Hillary Clinton's emails today."

But that interpretation differed even from an explanation offered later by Trump himself, who told Fox News the next day that "of course I'm being sarcastic."

Wanting to "hit" his opponents

Trump got into trouble for seeming to encourage violent behavior at his rallies after several violent clashes between protesters and supporters during the primary season. Trump suggested he would pay the legal fees of a man accused of punching a protester at a rally in North Carolina in March. He also urged supporters to "knock the crap out" of anyone trying to disrupt his rally by throwing tomatoes. He later backed off those statements, telling CBS News, "I don't condone violence."

More recently, while campaigning during the Democratic National Convention, Trump repeatedly told supporters he'd like to "hit" his critics who were attacking him from the convention stage — including former New York Mayor Michael Bloomberg. CNN ran that headline, while also noting that Trump often uses that term as a rhetorical device to describe verbal attacks.

Even so, during a rally at the Wings Over the Rockies Air & Space Museum in Denver, Trump doubled down, promising to "hit them back so hard." At that rally, Trump made clear that he'd "do it verbally" and on social media, and also attacked the media for questioning the statement.

Many of Trump's opaque statements seem to rely on suggestion and innuendo. It's been a year since Trump, displeased with Fox News host Megyn Kelly's tough questions at the first Republican presidential debate, told CNN that Kelly had "blood coming out of her eyes, blood coming out of her wherever." That comment was widely viewed as referring to Kelly's menstrual cycle — though Trump claimed his comments were misinterpreted. "Only a deviant would think that," Trump said.

But there have been other remarks that appear to fall along similar lines. Trump mocked 2012 GOP nominee Mitt Romney after Romney criticized him, saying the former Massachusetts governor would have "dropped to his knees" for Trump's endorsement four years ago. Also in March, during the primary season, there was the infamous "hand size" discussion, when then-rival Florida Sen. Marco Rubio raised questions about Trump's ostensibly small hands (a concern that has plagued Trump since the 1980s). Trump objected, saying, "Look at those hands, are they small hands? And, he referred to my hands — 'If they're small, something else must be small.' I guarantee you there's no problem. I guarantee."

The response to these vague statements from Trump tends to follow a pattern:

3. The media go into a frenzy, with several news cycles of coverage.

4. Trump and his allies complain that his words have been distorted, taken out of context or overblown.

Over the past year or more, this cycle has played out like a ritual again and again — keeping Trump in the spotlight and feeding news outlets' appetite for headlines. It's also fed Trump's narrative that the media are a mouthpiece for the Clinton campaign.

That approach worked well for Trump in the primaries, when he excited many core GOP voters with his bluntness and plainspoken, visceral style. Many Republican-leaning voters have told reporters they liked Trump's directness, even if they sometimes wished he'd moderate his tone. Many have also said they don't take his more outrageous statements literally, but admire that he's not afraid to say them.

But it's less clear that this style will work for Trump with general election voters. Since the Democratic convention, he's been slipping in polls of likely voters in key battleground states. About two-thirds of voters in a recent Washington Post-ABC News poll said they didn't believe Trump has the temperament to be president — a concern that may be exacerbated by Trump's pattern of making questionable statements, and a charge Hillary Clinton has picked up on.