Accessibility links
This Food Is Tasteless, But Never Bland: 'Sausage Party' Is Gleefully Profane Ain't no party like a Sausage Party 'cause a Sausage Party don't stop ... being blithely offensive. But this animated film for adult audiences is made with true passion and technical skill. 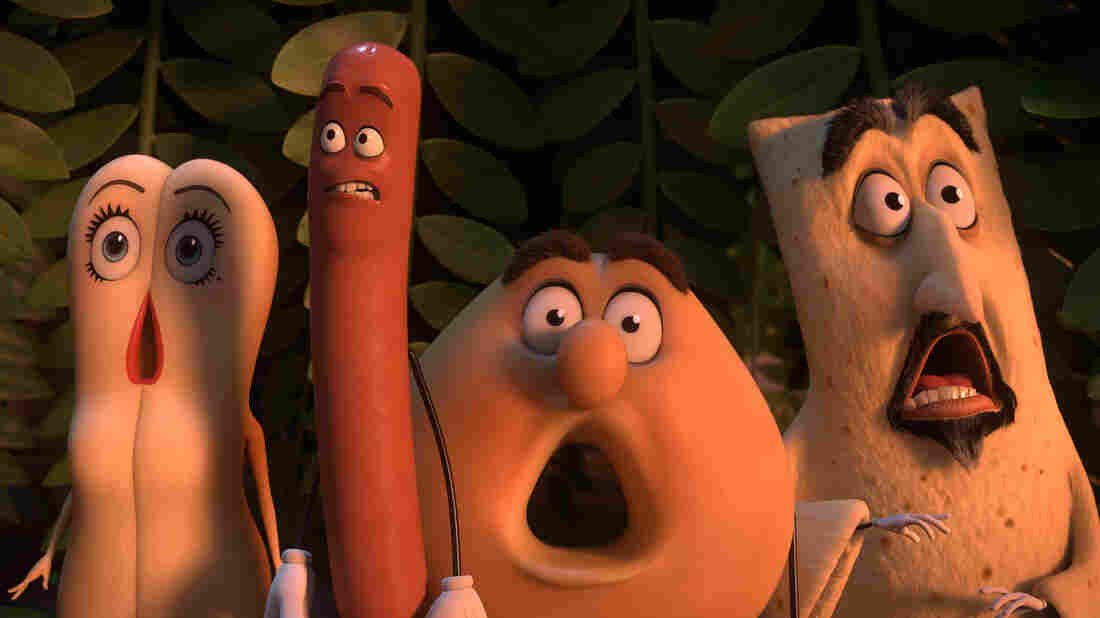 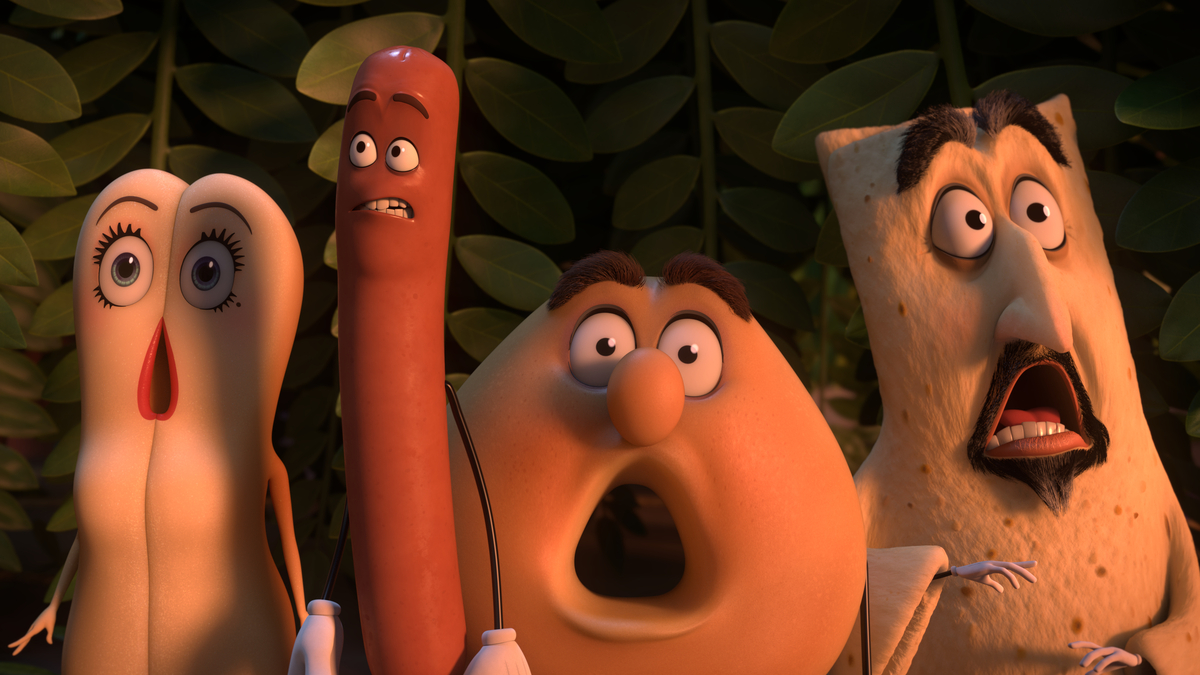 Food talks in the new computer-animated comedy Sausage Party, and it does a hell of a lot more than that. This hard-R supermarket saga is pure, unprocessed Seth Rogen and Evan Goldberg, the folks behind filthy fare like This Is the End and Pineapple Express, so you can expect to see copious substance use, unspeakably foul language, and heavy attention paid to everyone's favorite male organ. What you won't expect is getting all of those things from a talking hot dog with little Mickey Mouse gloves.

Rogen's predilection for a certain herb not sold in the seasoning aisle is well-known, but Sausage Party is made with too much loving care (and too much money) to be written off as a dumb stoner Disney parody. For heaven's sake, they hired Alan Menken, musical architect of the '90s Animation Golden Age, to carefully syncopate every f-word in the elaborate opening musical number. Some idea is at work, some truly anarchic spirit of the sort that's been absent from modern comedy features. The only thing processed here is the protagonist.

The film's script, by Rogen, Goldberg, Kyle Hunter and Ariel Shaffir, is — of all possible recipes — a religious parable. In the grocery, each food item sits patiently in its packaging, praying for one of the cart-pushing "Gods" to pluck them from the shelf and steer them through the double doors into the "Great Beyond." So when the packages holding Frank the frankfurter (Rogen) and his girlfriend, Brenda the bun (Kristen Wiig), are chosen, no one suspects their destiny awaits between someone's teeth — they're just hoping to finally have some hot, meat-in-bun action. (One of the film's many unexplained paradoxes is that, besides the obvious metaphor at hand, each piece of food also seems to have separate working, invisible genitalia.)

When there's a cleanup in the condiment aisle, staged like Saving Private Ryan, Frank and Brenda are separated from their companions and discover the truth about the Gods. Fellow sausage Barry (Michael Cera) encounters this truth up close when he narrowly avoids a Fourth of July slaughter in a kitchen and sets off on a Toy Story-esque journey back to the store — that is, if the scene in Toy Story where the toys reveal their true forms to Sid had involved bath salts.

More is yet to come, though it's best to stop there, both because the escalating weirdness should be served cold and because NPR standards prohibit me from describing it. What kind of hygiene product does Nick Kroll voice, for example? Can't tell you. What plan do all these lovable foodstuffs come up with once they realize the humans are out to eat them? Can't tell you that, either. How would they, hypothetically, celebrate a victory? Definitely not touching that one. This is a film determined to violate every boundary of good taste, though in so doing it becomes more childish than most "for kids" cartoons: It also traffics, South Park-style, in the easiest stereotyping jokes you can imagine. There's a jive-talking can of grits (Craig Robinson), a lusty Latina taco (Salma Hayek) and a nebbish-y bagel (Edward Norton) warring with a thickly bearded lavash bread (David Krumholtz) who dreams of "77 bottles of extra-virgin olive oil" waiting on the other side.

Some of the off-color stuff works; some is past its expiration date. But picture the teams of animators who labored for years over something this demented; consider that the production house, Nitrogen Studios, drew on its expertise from Thomas the Tank Engine to make this; and it's tempting to call Sausage Party the most absurd big-studio picture in recent memory, as well as the most absurdly compelling. No wonder it took 10 years to make. Co-directors Conrad Vernon (Shrek 2) and Greg Tiernan (the aforementioned squeaky-clean Thomas series) keep the concept cooking by treating it as though they really were making a Pixar movie. Facial animations have that familiar fluidity, the slightly exaggerated emotions, the slow dawning realizations. And whenever Frank and Brenda wander into a new supermarket aisle, the camera swoops around them with the same glee of discovery as Joy and Sadness wandering into new dreamlands in Inside Out.

These are no small gestures. Computer animation in the 21st century has supernovaed in complexity, both technical and emotional, to the point where adults regularly buy tickets to many of the genre's finest films. Sausage Party, unlike the Family Guy school of adult animation, knows this is a genuine love, not a cynical one, and plays us like the big cartoon-crazy fools we are. Not only does the film effortlessly mock the sense of wonder and the emotional roller coasters we've all felt watching Pixar's big-eyed sentient objects, but, in its own messed-up way, it provokes some new feelings, too: shock and awe, baked (and baked) until golden.