Accessibility links
In Defense Of Bronze: The True Mettle Of The Metal Of The 3rd-Place Medal In the Olympics, and in many other areas of life, from comic-book eras to health care plans, "bronze" has come to signify the least of three things. It shouldn't. 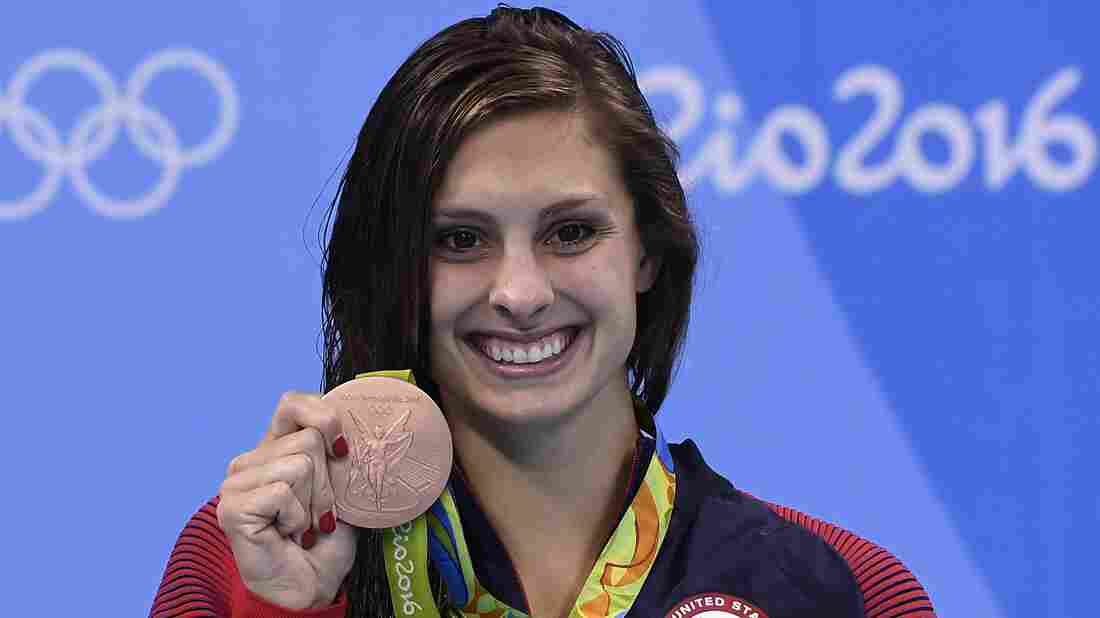 USA's Katie Meili poses with her bronze medal on the podium of the women's 100-meter breaststroke at 2016 Olympic Games in Rio. Gabriel Bouys/AFP/Getty Images hide caption 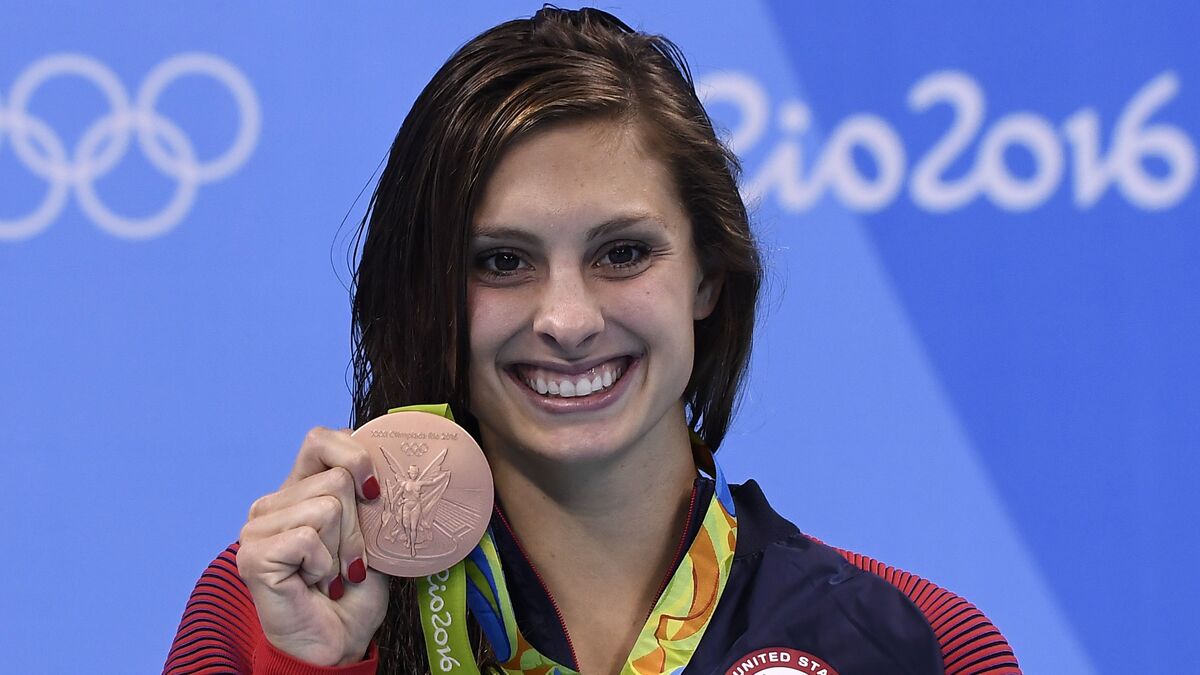 USA's Katie Meili poses with her bronze medal on the podium of the women's 100-meter breaststroke at 2016 Olympic Games in Rio.

As hierarchies of merit go, it's got long historical legs, stretching all the way back to the ancient Greeks.

Not — as many believe — to the ancient Olympic Games, however; those athletes just got olive wreaths for their trouble. (Well, olive wreaths and sunburn, one supposes, as competitors observed the tradition of gymnos, or nudity.)

No, it was the Greek poet Hesiod who first adopted a metallic taxonomy for assigning value to non-metallic things. He broke down the Five Ages of Man thus:

First came The Golden Age, in which the very first (perfect, benevolent) humans lived among the gods on Olympus.

The Silver Age occurred after Zeus overthrew his father, Cronus, and men began to war with one another. Zeus eventually destroyed these men for turning away from the gods.

The Bronze Age began when Zeus created a new human race, scrappy and tough, who eventually died in a massive flood.

To those he added an idyllic Heroic Age and a final Iron Age — Hesiod's own era, marked by labor and strife.

Somewhere between 600 and 700 years later, the Roman poet Ovid proposed his own Four Ages of Man (by lopping off Hesiod's Heroic Age, essentially).

Both poets set the template, in the Western World, for breaking the past into metals of different values — the further back you go, the better/more precious things get. (Hinduism also breaks the Ages of Man into four periods, or yugas, which are similarly albeit informally designated Golden, Silver, Bronze and Iron.)

Archaeologists, as is their wont, are much more practical. To them, the term "Bronze Age" represents a precise mid-point between the Stone Age and the Iron Age, so named for the tools humans were using, not any inherent value. But then, archaeologists are notorious buzzkills. Let's you and I ignore them.

It wasn't until the 1904 Olympics in St. Louis that the Gold/Silver/Bronze medal hierarchy was first introduced. Since that time, it's come to pervade the culture.

And yet, whenever it's exported and applied to other aspects of life, as it often is, Bronze generally gets left behind: employee health care plans, event sponsorships, credit card companies and frequent flier programs dutifully assign Silver and Gold status levels — but with Silver serving as the ground floor. From there, they often build up and out, adding a Platinum level, a Titanium level, and even a Diamond level (which can't help but seem like cheating, as diamonds are gems, not metals. Pick a schema and stick with it, Delta! It's a little thing called internal consistency, look it up.)

Music sales are certified Silver, Gold and Platinum. Burl Ives sang "Silver and Gold" but somehow never, throughout his long and storied musical career, spared even a single, tremulous note on the subject of bronzed baby shoes.

For most of the last century, there were just two commonly recognized eras of comic book publishing: the Golden Age (late 1930s-early 1950s) and the Silver Age (mid 1950s-early 1970s). The notion of a Bronze Age (now generally designated 1970-1985) came along relatively recently, and it connotes a time when superhero comics grew Byzantine and insular by abandoning the kids market to cater exclusively to hardcore, teen-and-adult fans.

All of this is why, when it comes to its current cultural cachet, bronze can't catch a break; it might as well be corrugated frickin' cardboard.

Hard proof: Both the traditional and modern breakdowns for anniversary gifts designate silver and gold as appropriate for a couple who've powered through 25 and 50 years together, respectively. But bronze? Hallmark, which really should know such things, doesn't include it on the modern list at all, and it only shows up on the traditional list as "Pottery/Bronze" for an ... 8th anniversary.

Eight lousy years. All your marriage needs to do to merit bronze is hang in there just one year longer than Burn Notice. Unless, that is, your friends opt to go the pottery route. Here, we do hereby celebrate your loving commitment with this ceramic duck.

So here we are: The Olympics' Gold/Silver/Bronze medal schema makes sense only if we think in the dullest, narrowest, purely pecuniary sense. Yes, gold is rare, silver somewhat less so, and the great demand for, and limited supply of, these metals ensure their relative trading values.

But these are athletes we're celebrating. Their feats are examples of human achievement.

Gold and silver? They already exist in the world. They are merely ... found. Stumbled across, as you would a wild potato.

But bronze? Bronze is wholly different. It's something we create. It is a human achievement.

Millennia ago, our ancestors conceived and fashioned something that had never existed in the universe: an alloy of copper and tin, alongside other metals. We, as humans, smelt it and — for the more than 2,000 years it stood as the hardest, most hotly traded metal in the world — we dealt it as well.

That's why every Olympic bronze medalist can take heart. Bronze stands for something, something profound and deeply inspiring about the human experience, that gold and silver never can or will.

Not that they need my pep-talk. As a much-cited 1995 paper in the Journal of Personality and Social Psychology noted, winners of Olympic bronze medals are generally happier with their achievement than silver medalists.

According to that paper's authors, bronze medalists are content to earn a spot on the podium. Silver medalists, however, will spend the rest of their lives tasting the victory that eluded them.

(The fact that they, and they alone, will always be able to use their medals to defend themselves from werewolves offers them, I suppose, only very the coldest of comforts.)