Accessibility links
Summer Camps Struggle To Enforce Bans On Screen Time Summer sleep-away camps say it's getting harder to enforce cell phone bans, and millennials say it's tough going cold turkey. But they all say it's more important than ever to learn how to unplug. 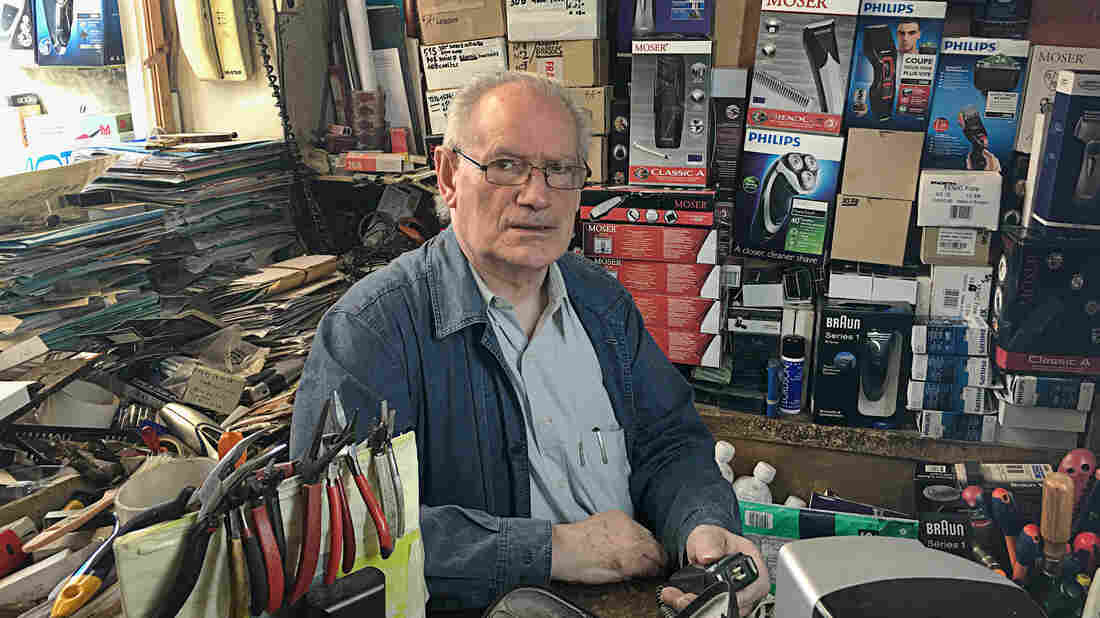 A sign outside the camp office offers a reminder of the gadget policy. Tovia Smith/NPR hide caption 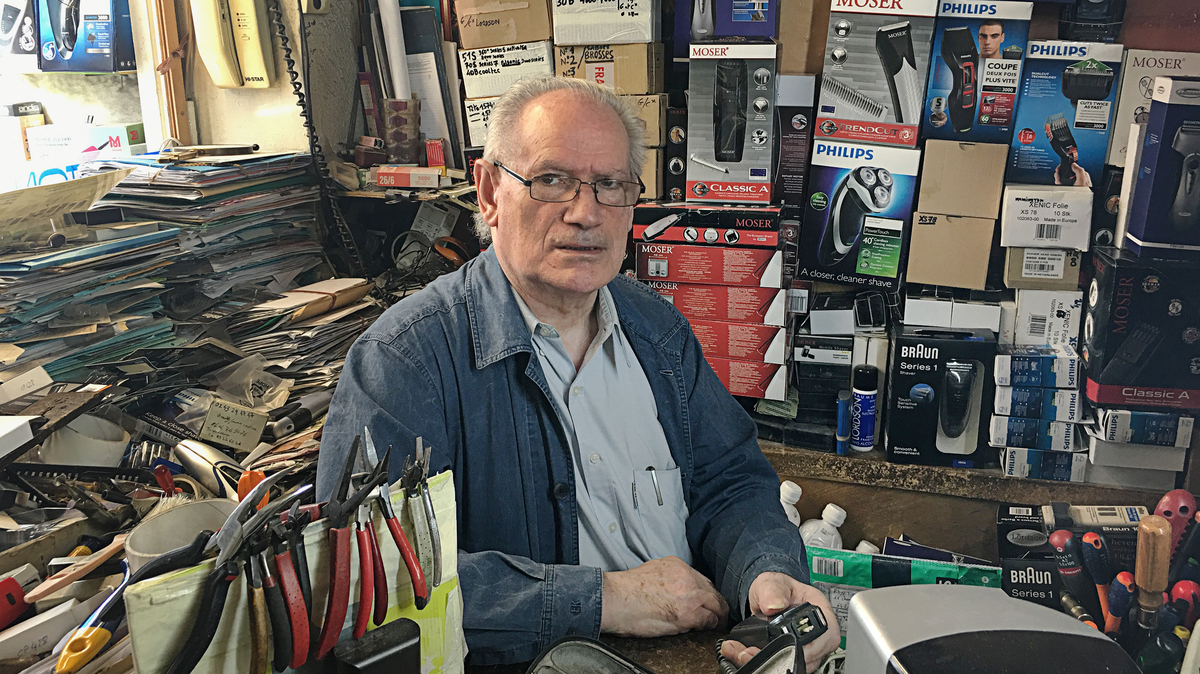 Part of the experience of summer sleep-away camp is missing loved ones. And for many kids these days, that means longing for their beloved...cell phones.

Most camps ban them, including Cape Cod Sea Camps, in Brewster, Mass. On opening day, the long driveway into camp is lined with signs welcoming campers, and warning them, "Send your last Snapchat" and "Last chance to send a text!"

Campers say going cold turkey isn't easy. When 16-year-old Lily Hildreth first arrives, she says she would constantly "tap my pockets, and you're like, 'what am I missing?'"

15-year-old Jack Reilly says he actually got the shakes. Well... sort of. He says he felt phantom vibrations from his empty pocket for weeks. "I'd like think I got a text and I'd like look around in my pockets, like, 'Where's my phone? Like, oh wait, I don't have my phone. I'm at camp!'"

Resident camp director – and psychologist — Stephen Gray Wallace, who runs weekly sessions with the campers, has been helping counsel the campers through their withdrawal. Out on a field under a tree, he reassures the teens they're not alone.

"They say when you hear your text come in, or a buzz, it's addictive," he tells them.

Whether brain chemistry is actually at play, Wallace knows he's dealing with kids who find their phones irresistible. And he says camps like his have been tweaking their rules; trying to find the right balance for these gen–tech kids who never unplug. 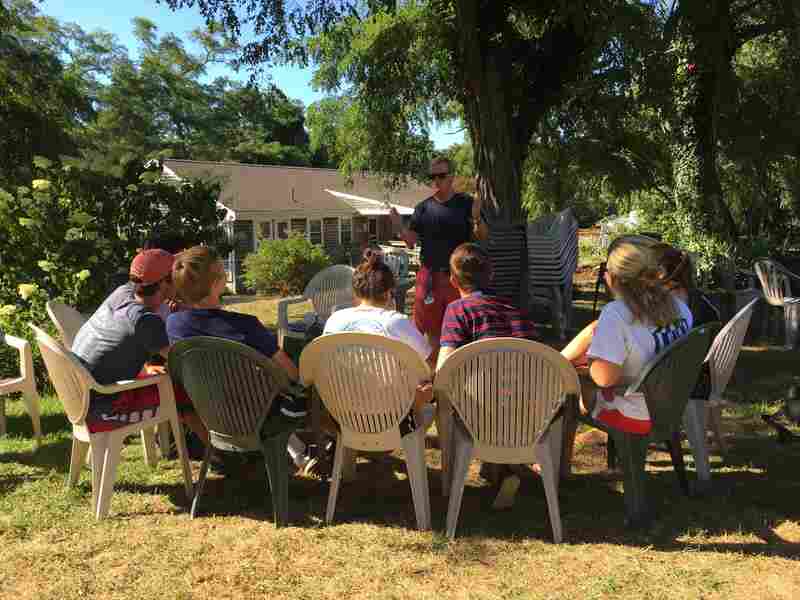 Cape Cod Sea Camps resident director Stephen Gray Wallace, who runs weekly sessions with the campers, has been helping counsel them through their withdrawal from the screens that dominate many of their lives. Tovia Smith/NPR hide caption 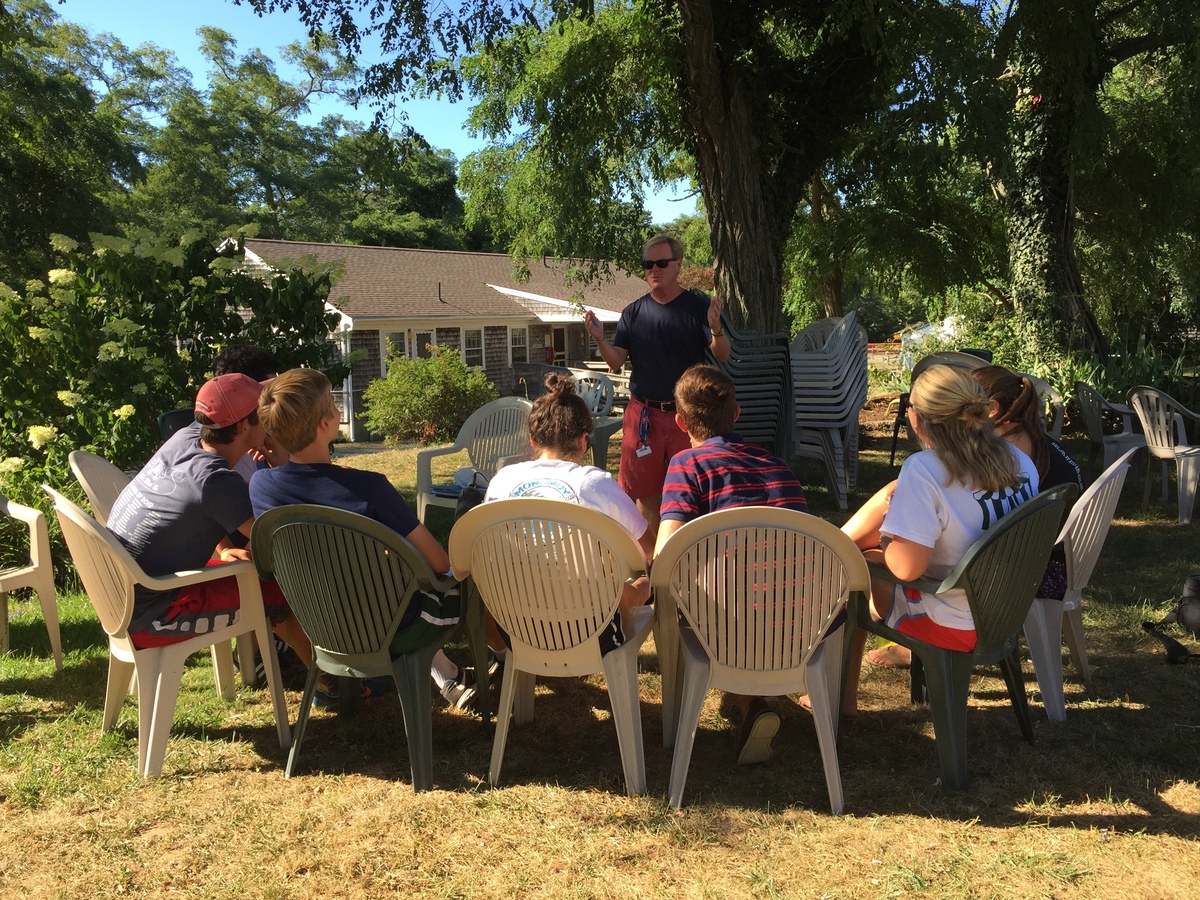 Cape Cod Sea Camps resident director Stephen Gray Wallace, who runs weekly sessions with the campers, has been helping counsel them through their withdrawal from the screens that dominate many of their lives.

At first, camp policy allowed phones only on trip days for emergencies. After a clamor from campers, Wallace says he relented and allowed kids to also text and call during trips, but social media were still banned. In retrospect, Wallace says, it was unrealistic to think kids could use their phones but resist the urge to check Facebook or Instagram and Snapchat.

"It got to the point where it was just unmanageable, we were literally sinking in this morass of disciplinary situations," he says.

So this year, the policy changed again. Now kids are allowed a social media fix on trips, but at camp they're back on the wagon. Many campers say it took them a week or two to detox, but ultimately they've surprised themselves.

"I haven't read a book in like five years, and I just recently started reading one," says 16-year-old Jonah Bachman. "I forgot how much I loved reading!"

Since quitting his phone habit, he says he's also more engaged with friends and the outdoors.

"Often times I'll sort of just find myself walking around, like enjoying, like you know going down to the ocean, just sort of being there," he says.

The wooded seaside camp grounds are a bucolic setting. The view over the bluffs to Cape Cod Bay, glistening in magic Cape light and dotted with sailboats, is such a picture-perfect scene it's little wonder that campers like 17-year-old Aggie Chamlin still fight the urge to snap and post it.

"I mean this view! You definitely want your friends to see it," says Chamlin. "I mean how could you not want to brag about this?"

But Chamlin has seen the light. Now six weeks sans selfies, she says she is actually able to be more herself. And she says being phone-free has also led her to make friends with kids who are not exactly in her comfort zone — kids she would never even talk to at home.

"I think a cell phone's a virtual wall that you put up for yourself," she says. "You're on your phone, and it's like you don't need to communicate with this person. You just don't have to. "

And it's completely cured her "FOMO," or "Fear Of Missing Out," that she feels when she scrolls through everyone else's smiling, laughing posts.

"I feel like social media stresses me out a lot," she says. "And so not being able to have [the phone] prevents it completely. There's nothing you can worry about, 'cause it's out of your hands."

Some kids have come so far, that even when they get their phones back and are allowed to check social media, they don't.

"You have this slew of texts, and it's all just so minute," says Chamlin. "It just doesn't matter. My brain just isn't there."

But she says it 's been a bit of a different story trying to cut the cord to Mom and Dad.

"When things happen, like, oh this person isn't being nice to me, and all I want is to hear my mom's voice, or all I want is to text my mom and tell her, 'I'm out of snacks, and I need them now.' This is just so inconvenient," she says. "But it also forces you to like be innovative, I guess, and figure it out."

And yes, he has actually caught parents smuggling phones in.

Janet Shapiro, from a suburb of Boston, was one of those moms. "I have to laugh, yes. I say it with shame as well." She gave her son an old, dead phone as a decoy to hand in when he arrived, so he could secretly keep the working phone with him.

But, Shapiro says, she quickly learned her lesson the hard way.

"He was calling all the time! Too often!" she says. "I didn't want to hear from him!"

This year, she did not smuggle in a phone for him. But as kids tend to do when they're left to be independent at camp, he got resourceful, and figured out another way to get it done on his own.

Now, Shapiro is hoping he gets caught, so camp will confiscate the phone.