Accessibility links
Meryl Streep's Singer Has Delusions Of Adequacy In 'Florence Foster Jenkins' In her latest role, Streep plays a real-life laughingstock who fancied herself an opera singer. 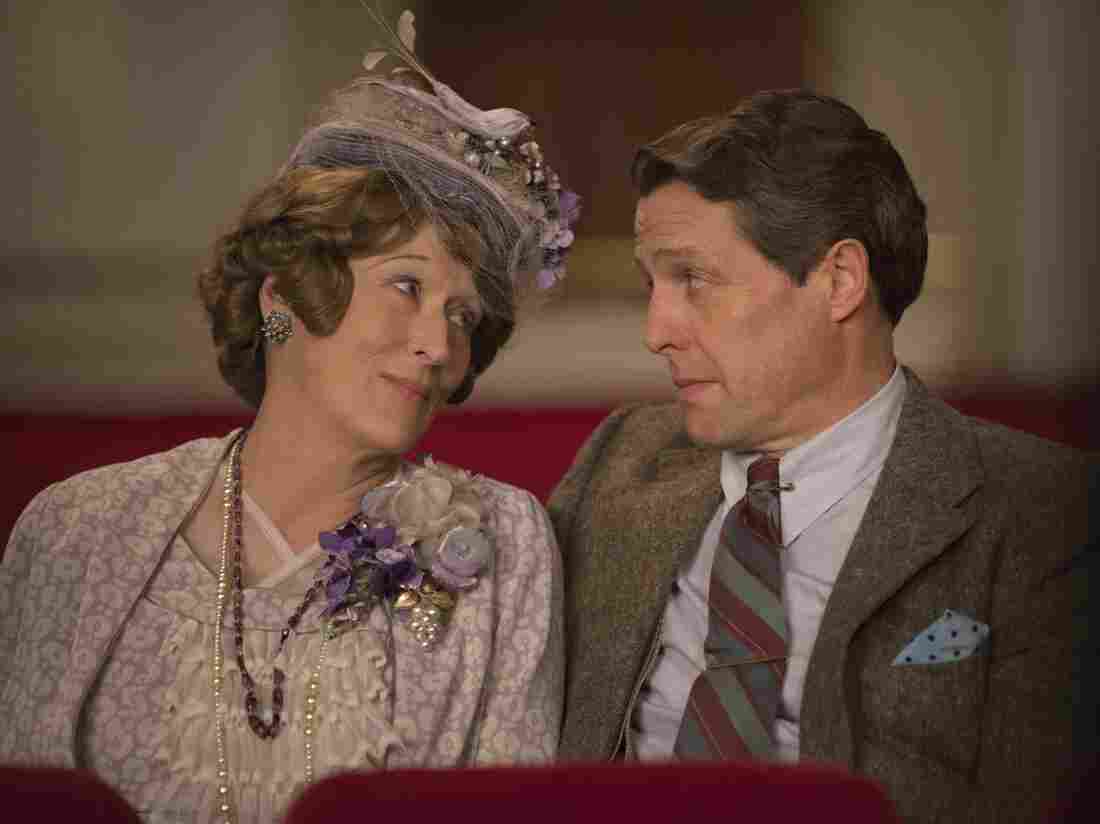 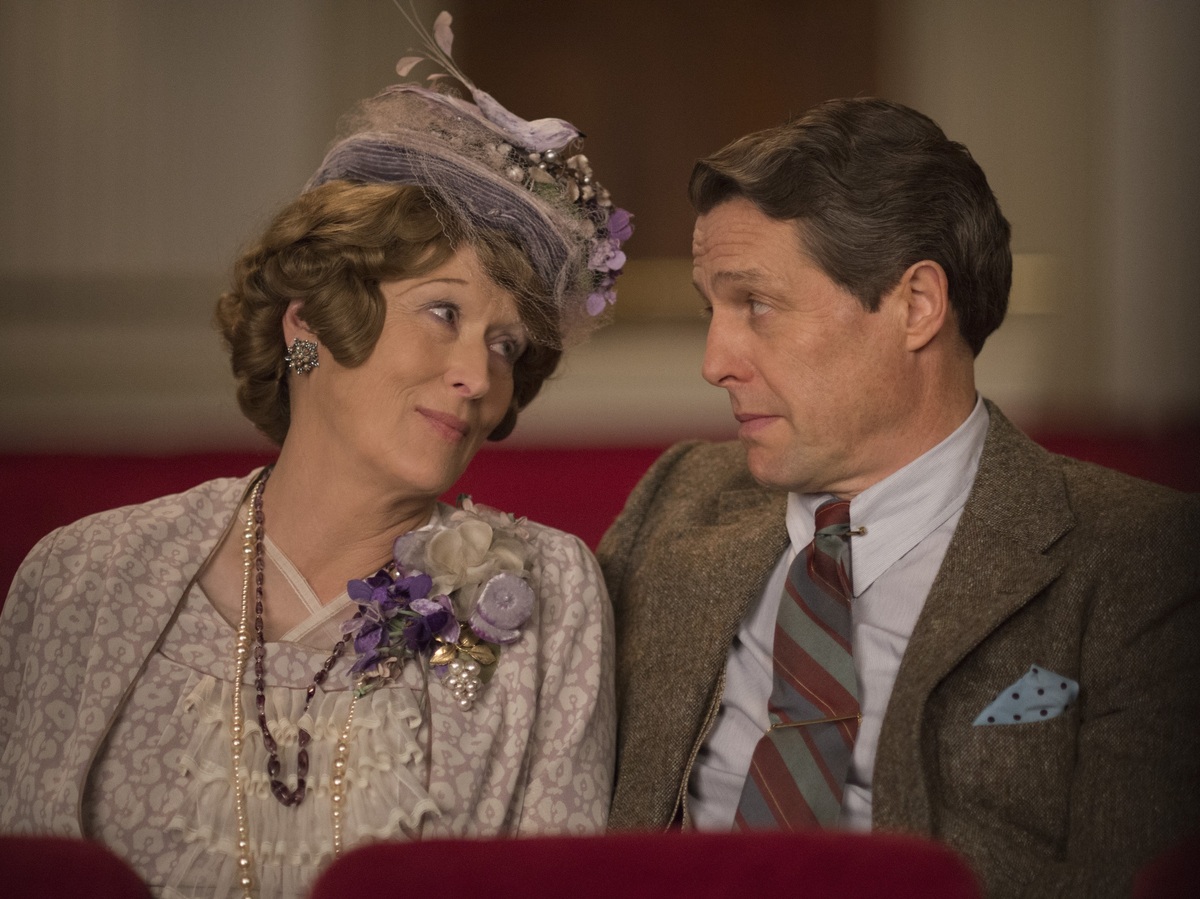 The perils of misplaced confidence animate the story of Florence Foster Jenkins, both in real life and in the various fictions built around her.

In Stephen Temperley's two-character play Souvenir, Florence's story — that of a wealthy 1940s arts patron who became quite famous as a really terrible opera singer — was used principally as a vehicle for ridicule and laughs. She was turned into a '20s French doyenne in Xavier Giannoli's César-winning film Marguerite (2015), which viewed her with sentiment and no small degree of pity.

And now she's played by Meryl Streep in the eponymous film, Florence Foster Jenkins, which roughly splits the difference between those two interpretations.

The real Florence sang dreadfully at public recitals, attired in costumes with angel's wings. She recorded albums. And she managed to perplex all who heard her by never letting on whether the whole thing was a joke. Now, there's a good chance that the least-gifted performer ever to sell out Carnegie Hall is about to start selling out a lot of movie theaters.

The film introduces Florence (Streep) and her actor-husband St. Clair Bayfield (Hugh Grant) at a charity pageant where they are hosting (rather than providing) entertainment of a relatively dignified sort. It then follows them home to a grand, lavishly appointed apartment where there always seems to be something musical going on. On this particular morning, there are people inquiring about concert tickets; conductor Arturo Toscanini has dropped by to solicit a symphony donation; and the hallway is filled with auditioning pianists. Florence, it seems, has decided she needs an accompanist for her music lessons.

A timid, diminutive fellow named Cosmé McMoon (The Big Bang Theory's Simon Helberg) erupts in smiles when he's selected. And he's still smiling the next day when her distinguished music instructor begins the lesson. And then his smile fades as he hears his patron's voice for the first time, and the instructor greets her strangled shrieks with a quiet, "There's work to be done, but you've never sounded better."

Now you'll note that "never sounded better" is not quite a compliment. Nor is a later comment that "there is no one quite like you."

But you see how this works: St. Clair Bayfield protects his wife by surrounding her with people he pays to be supportive. And who's hurt, really?

Frears is blessed with a cast that seems incapable of hitting any wrong dramatic notes.

Until, that is, Florence's enthusiasm leads her to propose a public concert. At which point, Cosmé can't understand why St. Clair is so calm. What Cosmé doesn't know is that Florence's husband has been through this before. The guests at the concert will all be prescreened — folks who know her, who have benefited from her generosity, who have, in short, reason to applaud.

Then Florence does something that causes even her husband alarm: She rents Carnegie Hall and offers most of the tickets to returning servicemen as thanks for their war effort. When a recording of Florence is leaked to a radio station, demand goes through the roof, and the problem for St. Clair becomes how to deal with a raucous SRO crowd and, more particularly, the press.

Hugh Grant's stammering has rarely been put to better use. Director Stephen Frears has made Florence Foster Jenkins more affectionate than affecting, taking a frothier approach than the French film Marguerite did, though seldom descending into actual farce. The real Florence Foster Jenkins did rent Carnegie Hall, and she and Cosmé McMoon did perform there to a sold-out crowd, barely a month before she died (some said of distress at the crowd's less than friendly reception).

Frears is blessed with a cast that seems incapable of hitting any wrong dramatic notes: Grant's Bayfield is stoic as he strives to protect his wife from scoffers, as well as from what you might call her own delusions of adequacy; Simon Helberg does his own accomplished piano playing as Cosmé, even as his eyes betray a firm conviction that "we'll be murdered out there."

And the film revolves around (and would be more or less unthinkable without) Meryl Streep, who is not only doing her own excruciating singing on the soundtrack, but is inhabiting the dotty diva of the title as fully as she has such other real-life figures as Margaret Thatcher and Julia Child. She looks at times like a sort of musical Margaret Dumont, upholstered in a dowager's furs and gowns, ignoring a whole world of Marx Brothers distractions.

But she's so much more fragile, and hopeful.

And, though you come to laugh at her, you'll likely reconsider.