Accessibility links
Trump Supporters On The Border With Mexico Want The Wall Along the U.S.-Mexico border, most people favor Hillary Clinton for president and oppose building a wall. But a small group of Trump supporters demonstrates zeal. 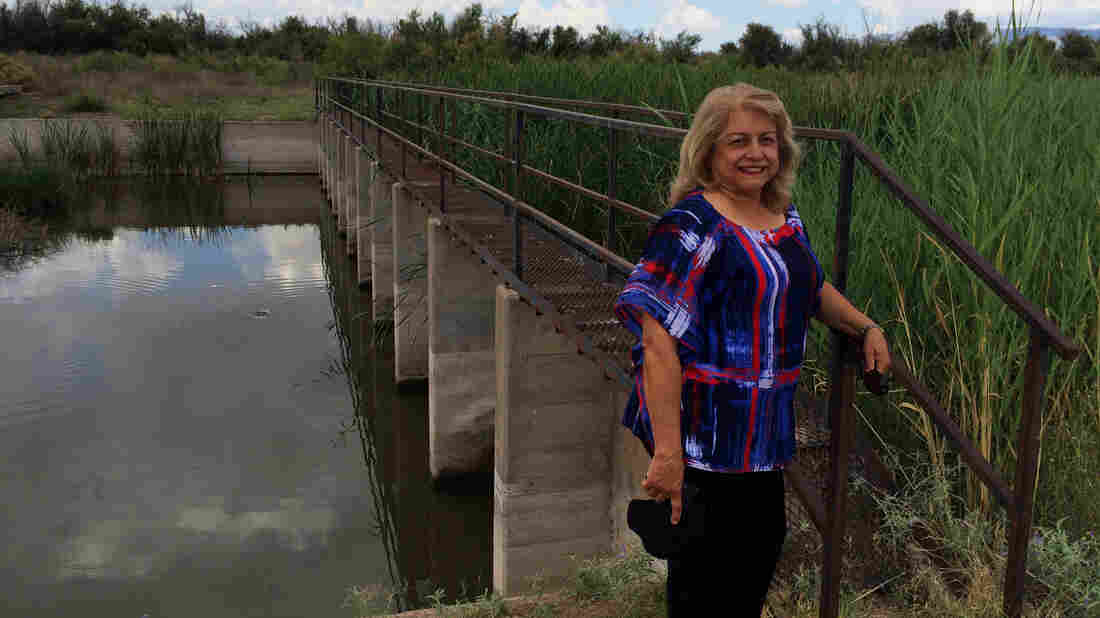 Lupe Dempsey, a retired federal agent, brings her Glock 9mm with her when she goes down to the Rio Grande. She believes the border is too wide open, evidenced by this unguarded metal walkway across the river in far West Texas. John Burnett/NPR hide caption 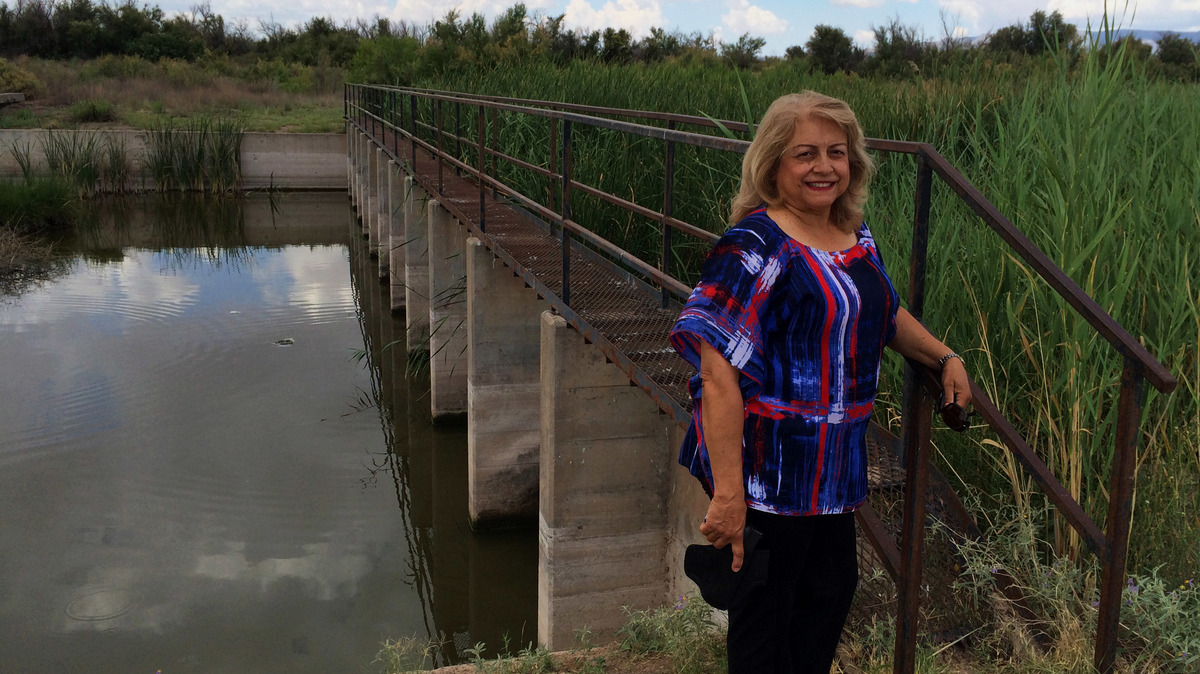 Lupe Dempsey, a retired federal agent, brings her Glock 9mm with her when she goes down to the Rio Grande. She believes the border is too wide open, evidenced by this unguarded metal walkway across the river in far West Texas.

Polls show that the idea of building a wall across the southern border remains unpopular with the general public and especially in the U.S. borderlands.

But not everyone living near the international divide opposes a barrier between the U.S. and Mexico. Donald Trump has a small, zealous following along the southern frontier.

Trump's Plan To 'Make Mexico Pay' For The Wall

Hudspeth County, in far West Texas, has desert, mountains, cactus, coyotes and 250 Republicans. The GOP county chair is Maria Guadalupe Dempsey. She looks as sweet as a school crossing guard, but for 20 years she worked as a criminal investigator with Immigration and Customs Enforcement. She says lots of folks in lower Hudspeth, where she lives, are concerned about border security.

"Border Patrol does a good job of patrolling this area, but it is kind of difficult to patrol it all the time," She says. "So I would see a wall maybe as a deterrent."

As proof of a porous border, she describes a footbridge across the Rio Grande, built years ago, that is completely unguarded. After a bumpy 20 minute drive from Interstate 10 down to the riverside, seeing is believing. Sure enough, it's a narrow metal walkway across the river that anyone could walk across from the Valle de Juarez, in Mexico, which is home to farmers and violent drug smugglers.

"[It's] the same that you would do in your house," Dempsey says, holding a Glock 9mm handgun for protection. "You build a fence, you put a gate up and you open and close it as you wish. You invite people in. You don't want people who are not invited to come into the country."

After the interview, we go to a cafe for iced tea and we meet a couple of Border Patrol agents Dempsey knows. One of them smiles and says, "We knew y'all were down there."

Drive six hours downriver and you come to the quiet border town of Del Rio — home to an air force base and Lake Amistad, with its big bass. Jon Anfinsen is a Border Patrol agent and local president of the National Border Patrol Council, which has publicly endorsed Trump. When asked about Trump's wall, he smiles tightly.

"Well, I don't know if Trump is holding to [a wall from the West] coast to the Gulf [of Mexico] anymore. I know the union has expressed it to him that there are places where it absolutely is necessary," he says. "But there are other places where it's just not feasible. A lot of the area it's hilly or the terrain just would not support it. We have a lot of private land."

Anfinsen is asked, in general, what he thinks about Trump's candidacy.

We're driving under a canopy of shade trees past small, hand-built houses that face the river and the rugged bluffs on the other side. Anfinsen pulls over and parks in front of a closed gate. A man hauls himself out of a wheelchair. He's drinking a beer and a small, excitable dog is racing around his feet. 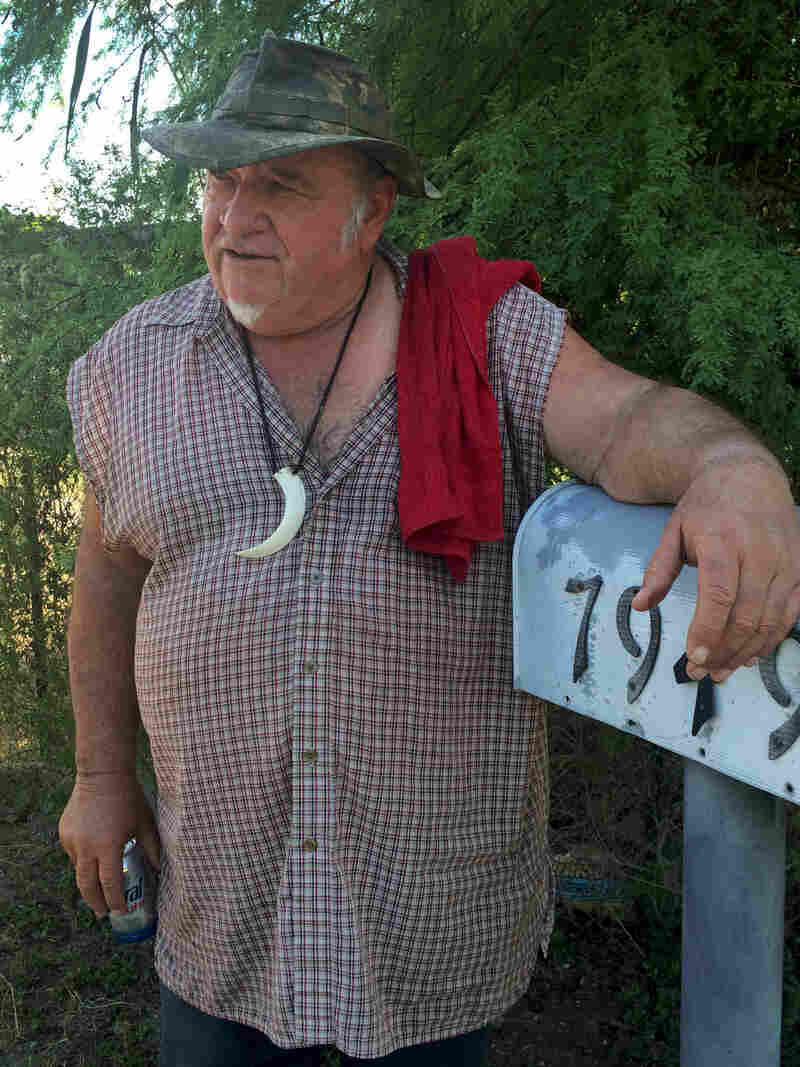 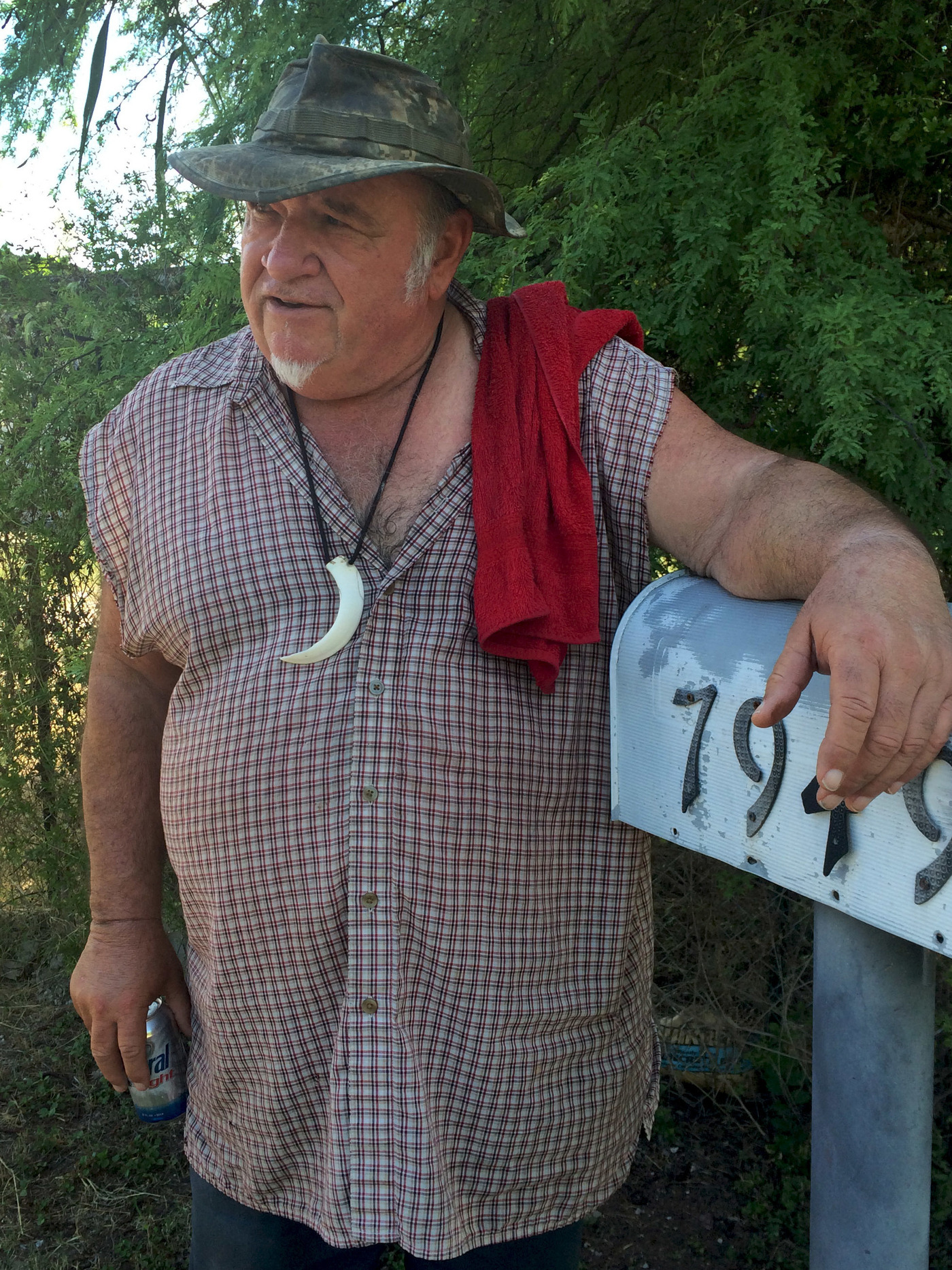 Andres Montemayor, a 66-year-old retired police officer, says he's all for Trump's wall: "I think we need protection on the border. You know why? Because our law enforcement are too undermanned."

Montemayor is understandably upset. A week before this interview, he says thieves waded across the river and stole his Skillsaw, a chainsaw and a grinder. He says build the wall, despite his lovely view of the unusually clear, sparkling waters of the Rio Grande that flow past his home.

"We keep getting hit [by thieves]," he says, adding darkly that if it keeps happening, "I'm gonna shoot to kill."

As I'm walking away from his gate, the ex-cop has a parting message: "If you can get hold of Donald Trump tell him we need him here."

Another three hours down the border highway brings you to the international trade hub of Laredo. Elva Leyendecker lives in the old downtown neighborhood that backs up to the Rio Grande. She stands outside of her historic house built of river rocks before Texas won its independence.

"Mexico is my backyard, seriously," she says, glancing at a giant Corona beer sign in Nuevo Laredo, Mexico.

Leyendecker is a devout Christian, a Republican and she's Mexican-American. She plans to vote for Trump not because Laredo needs a border fence — it already has one — but for other reasons. 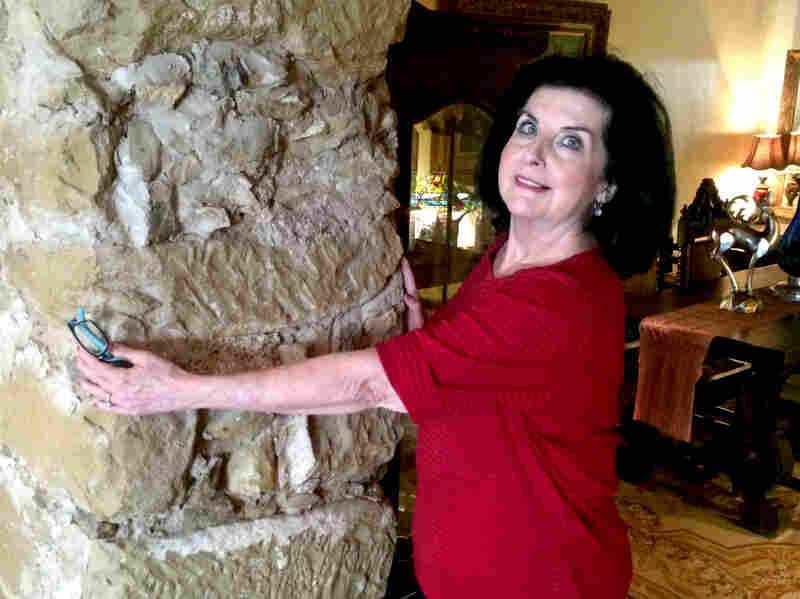 Elva Leyendecker, a Laredo Republican who plans to vote for Donald Trump, shows her historic home on the northern bank of the Rio Grande. John Burnett/NPR hide caption 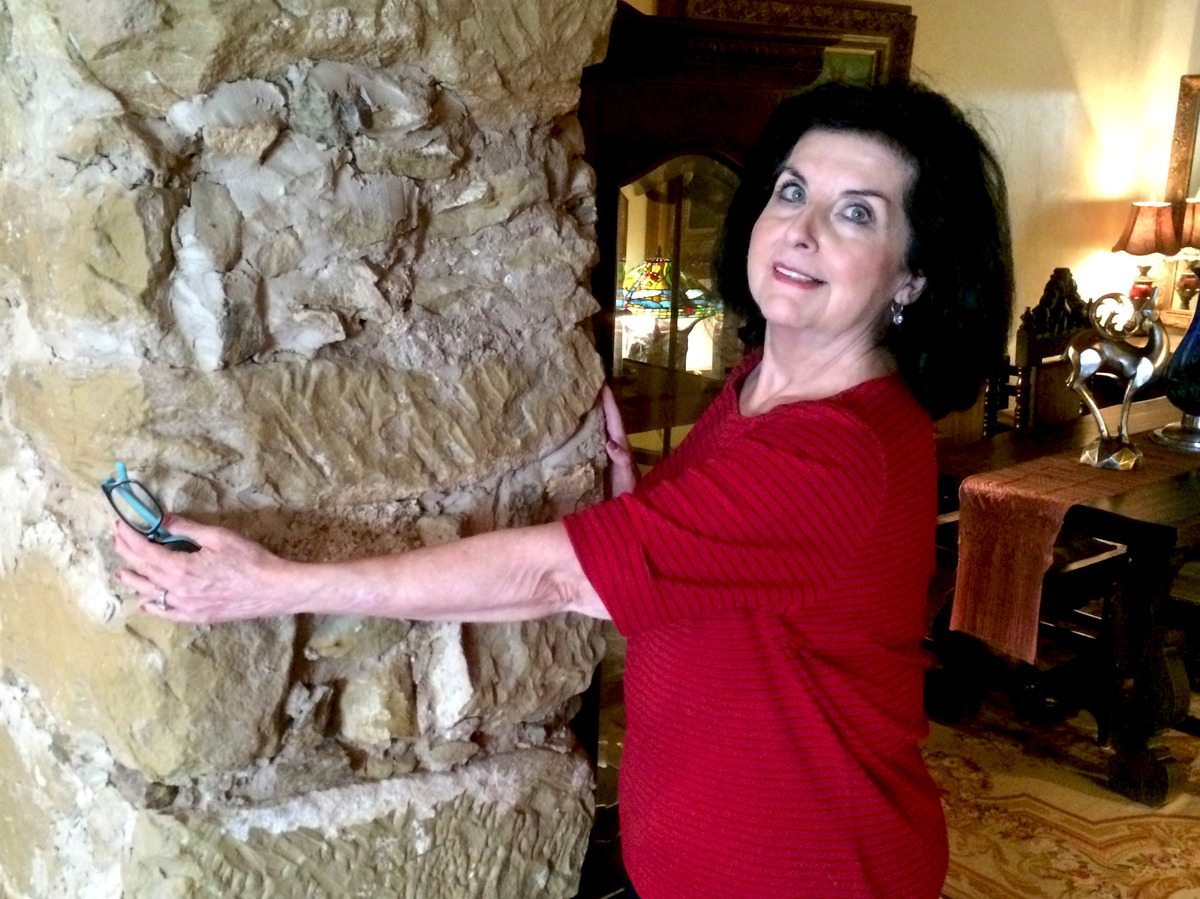 Elva Leyendecker, a Laredo Republican who plans to vote for Donald Trump, shows her historic home on the northern bank of the Rio Grande.

"I know several women that come and have babies here that are Mexican citizens," she says. "Which is right because you're an American citizen. I understand that. But they're making more money than those of us who are working because they have five children. People have to realize that this is a problem here."

The state of Texas did a study a decade ago on the impact of undocumented immigrants and concluded they generate more taxes and other revenue than the state spends on them.

Last month, Cronkite School of Journalism at Arizona State University, Univision and the Dallas Morning News released a survey of U.S. border residents — 7 in 10 respondents said they do not want Trump's wall.

The borderlands are Hillary Clinton territory. It doesn't help that Trump insulted Mexico and a Latino federal judge and that he eats taco bowls. But as with the rest of the country, no matter what he says and does week after week, some people just love Donald Trump.