Accessibility links
It's Electric: 'Last Days Of Night' Re-Creates Charged Rivalry Of Edison And Westinghouse In the 1880s, Thomas Edison and George Westinghouse battled over control of America's nascent electrical system. Graham Moore tells their story in The Last Days of Night. 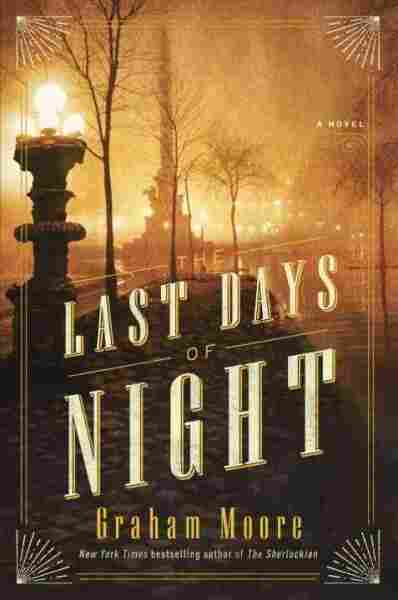 The Last Days of Night

Graham Moore's new novel opens in 1888 with a jolt: Its main character, Paul Cravath, witnesses a Western Union worker being electrocuted in the sky above Broadway while trying to repair a live wire. Blue flame shoots from his mouth and his skin falls from his bones.

Later that day, Paul meets Thomas Edison, an inventor who is racing against archrival George Westinghouse to electrify the United States from coast to coast. The success of Edison's inventions hinges on the U.S. adopting DC electricity, while Westinghouse's innovations rely on AC power.

Moore's novel, The Last Days of Night, follows Edison and Westinghouse's rivalry. He tells NPR's Scott Simon that he was eager to re-create the time period in which America was being lit up for the first time. "When you read the journals, the diaries, of people alive in the 1880s, they talk about seeing electric lightbulbs for the first time and they describe it as if they're seeing a new color. They had literally never seen anything remotely like this before. The effect was shocking, sort of literally and figuratively."

On why he decided to put Paul, a 26-year-old lawyer, at the center of his story

As I started researching this book, there was a long period of going through biographies of Edison, Westinghouse, Nikola Tesla. And then one day I kind of stumbled on a single sentence in an Edison biography that made me sort of stand up and say, "This is it." And I was reading about how, in 1888, Edison sued his archrival George Westinghouse for violating his patent on the lightbulb. Edison sues Westinghouse for what historians estimate to be ... about a billion dollars in 1888, which you can imagine was the sort of money worth going to court over. ...

Edison's Talking Dolls Can Now Provide The Soundtrack To Your Nightmares

But so that's what made Westinghouse's next move so utterly insane. What Westinghouse did was hire as his lead litigator on what might be the largest lawsuit in American history — Westinghouse hires this 26-year-old kid named Paul Cravath. Paul is 18 months out of Columbia Law School in New York. He has never really had a client before, much less tried a case. And now he's the lead litigator on this unfathomably large lawsuit. He's in way over his head, and this kind of opened up the whole story for me. What if we tell the story of kind of the great scientific rivalry of the 19th century, all from the perspective of this earnest, ambitious, hungry young attorney who's just moved to New York to make good?

On the difference between AC and DC electricity

The simplest way that I like to talk about it is it's the 19th-century version of VHS and beta, if we all remember that from the '80s: They're two incompatible, essentially, systems of electricity. You know, there is still scientific debate about, kind of, which is "better," AC or DC, and I think what I would argue is after 100 years we've found that they're sort of good for different things. But effectively ... the question that Edison and Westinghouse were fighting over, it wasn't just the lightbulb. The lightbulb was what the lawsuit was over, but what the lightbulb represented was who was going to control the American electrical system. Who was going to wire all of the United States for electricity, and whose system of these two incompatible systems were they going to use? And that's why it was so valuable, because everyone knew whoever controls the American electrical system, you know, makes an unfathomable fortune for centuries to come.

It was a brilliant move on Thomas Edison's part. At one point he felt that he was, kind of, losing the PR war with George Westinghouse, so Edison — who had up until this point been actually a vocal anti-death penalty proponent — hatched this plan. And what he did was he started petitioning the New York State Legislature to begin executing its prisoners with an electric chair. And you might ask: Why did he want electricity, which he was a proponent of, used in executions? Well, he didn't ask the New York State Legislature to use his direct current; he asked them to use his enemy George Westinghouse's alternating current, AC. So he petitions them to use his opponent's technology in an electric chair so that his opponent will get kind of all this terrible press and people will associate Westinghouse with the electric chair and, you know, who will want the buy the same equipment for their home that's used in an electric chair? No one. ...

Edison's plan finally is put to the test when they execute, New York State executes, its first prisoner with Westinghouse's AC. And the whole PR fight they've been having this whole time has been about which is safer, AC or DC? And they're each saying their technology is safer, because people were quite afraid of it. So they have the first electrocution and Westinghouse's AC proves to be too safe. It doesn't kill him on first try; it doesn't kill him on the second try. And Edison's attempt to smear Westinghouse with the dangers of AC has precisely the opposite effect.

It reaffirmed my belief that I am certainly not one, which is always handy to be reminded of. No, I mean in a sense I felt so much like Paul Cravath writing this novel, and I think that's one of the reasons he became the protagonist — this, kind of, hopefully reasonably intelligent person in way over his head as he tries to fathom the inner workings of the minds of Edison, Westinghouse, Nikola Tesla. I was trying to figure out what was going on in their heads just as Paul Cravath was.