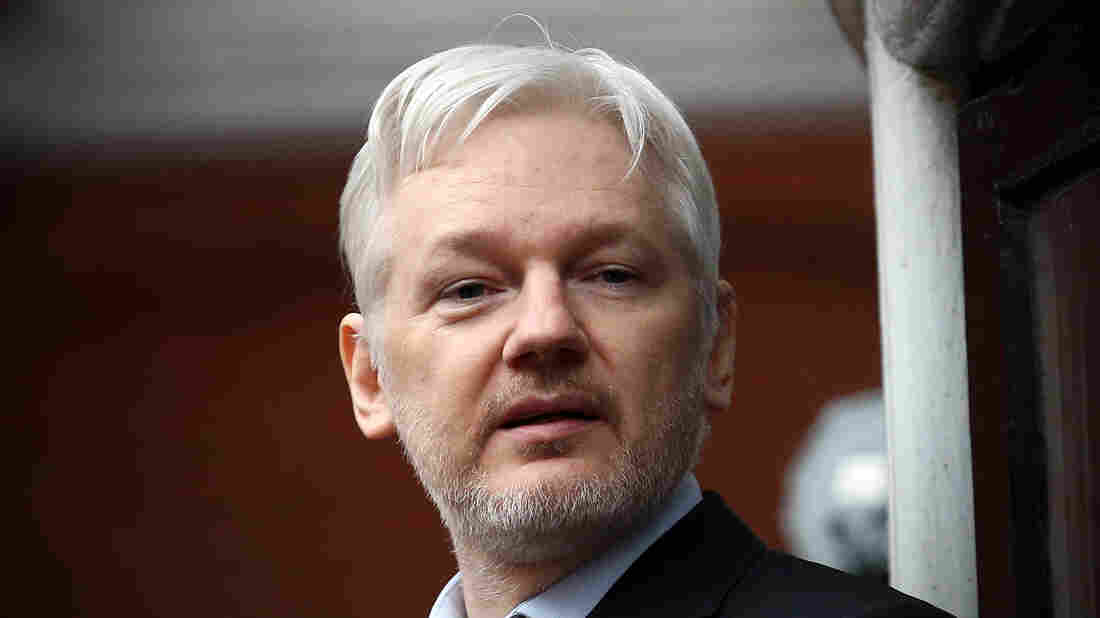 WikiLeaks founder Julian Assange, pictured in February on the balcony of the Ecuadorean Embassy in London, where he has lived for four years to avoid extradition to Sweden. Carl Court/Getty Images hide caption 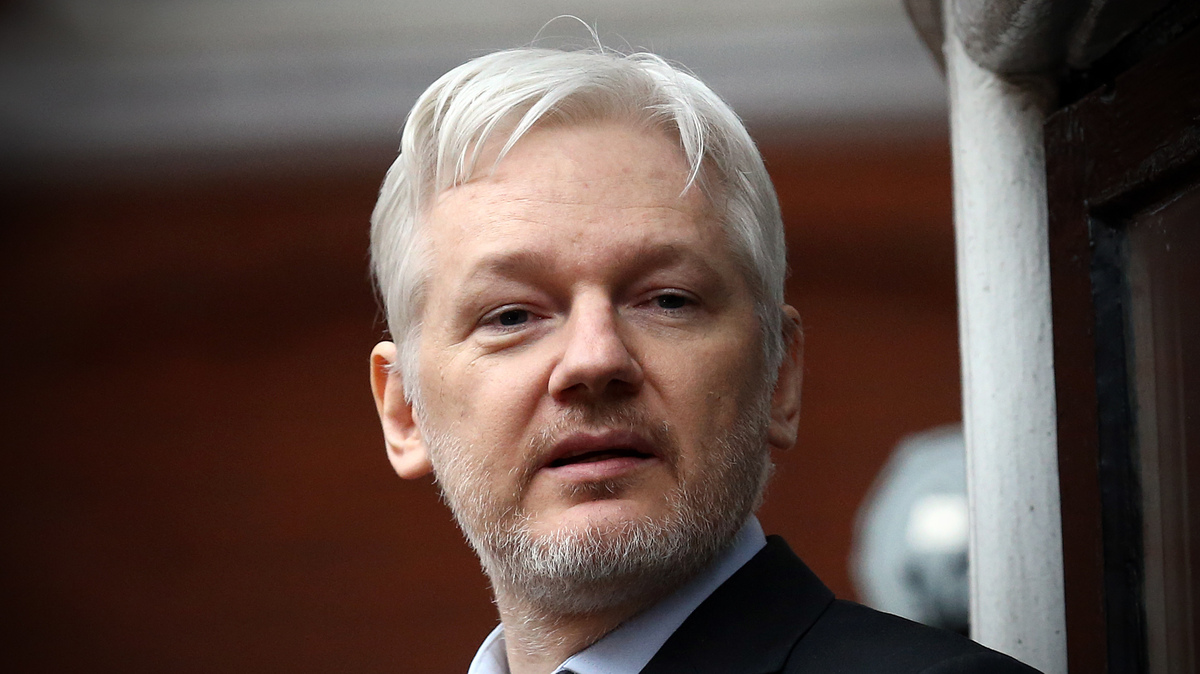 WikiLeaks founder Julian Assange, pictured in February on the balcony of the Ecuadorean Embassy in London, where he has lived for four years to avoid extradition to Sweden.

Julian Assange says if the United States government sees him as a threat to national security, it should see Hillary Clinton as one, too.

In an interview with Morning Edition's David Greene, the founder of WikiLeaks called the Department of Justice's decision not to prosecute Clinton for handling classified information on her private email server an "incredible double standard."

Assange has been living in the Ecuadorean Embassy in London for four years to avoid extradition to Sweden, where he is wanted for questioning on suspicion of rape.

In a statement last month, FBI director James Comey said the FBI "did not find clear evidence that Secretary Clinton or her colleagues intended to violate laws," but that the use of a private email server was "extremely careless." Comey advised the Justice Department that "no charges are appropriate in this case," and career prosecutors agreed.

Assange noted that, had a case proceeded, Clinton could have been prosecuted under the Espionage Act of 1917, which bans the disclosure of classified information to an unauthorized person "with intent or reason to believe that the information is to be used to the injury of the United States."

Assange said in the past courts have found that a lack of intent to harm the United States did not absolve the accused of guilt.

"There has been an interpretation saying that it doesn't matter that you didn't intend to harm the United States, but they seem to have changed the standard." 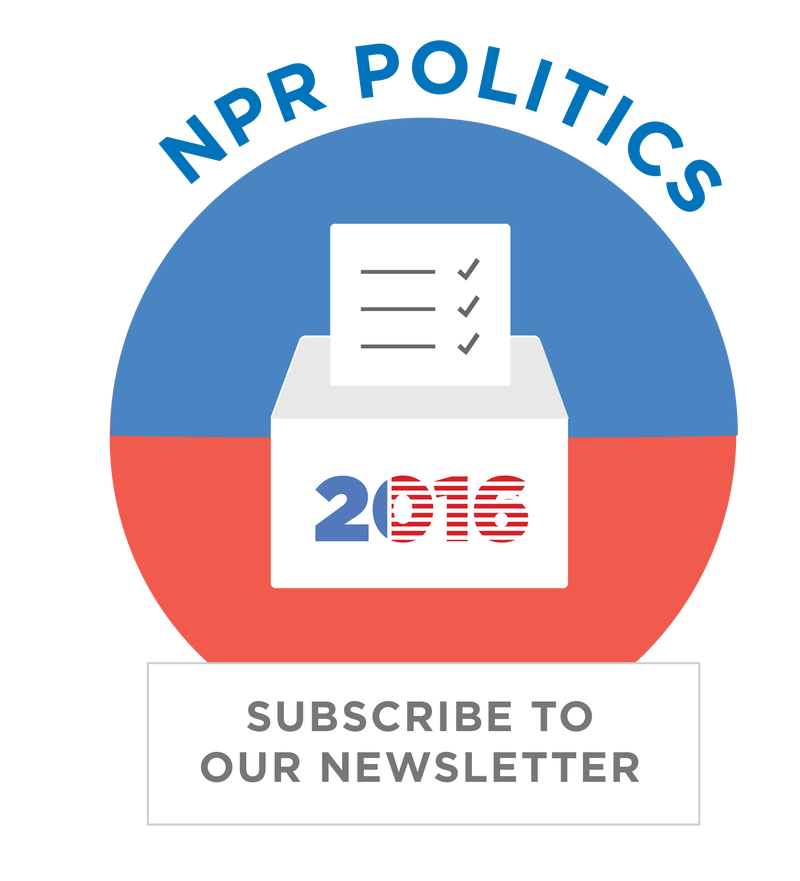 In 2013, U.S. Army Pfc. Chelsea Manning was convicted of the Espionage Act after disclosing classified military information to WikiLeaks. Some have criticized the conviction, arguing Manning was a whistleblower, not a spy with intent to harm the United States.

In his NPR interview, Assange regarded the open disclosure of information with reverence. He referred to WikiLeaks' 11 million documents as a "rebel Library of Alexandria."

"I believe that the way to justice is education," Assange said. "By bringing out into the public domain how human institutions actually behave, we can understand frankly, to a degree, for the first time the civilization that we actually have."

As an example, he cited one of WikiLeaks' more recent publications: the 20,000 hacked emails from the Democratic National Committee. Those emails revealed that some senior DNC staffers had worked to promote the candidacy of Hillary Clinton over her opponent Bernie Sanders. Four DNC officials resigned in the aftermath, including its chair, Florida Rep. Debbie Wasserman Schultz. Assange called the leak "a great journalistic scoop."

"That's a remarkable and important contribution to U.S. democracy by our sources and by WikiLeaks," Assange said. He questioned how other publications might have handled the information.

But, he added, "I'm not confident that in fact all media in the United States would have published those emails," referring to what he called the partisan nature of the U.S. media landscape leading up to the election.

The potential source of the leaked material has intrigued some as much as its substance: U.S. officials have said they're "highly confident" the DNC hack was the work of the Russian government. Assange said he could not give any information to Greene about who his sources are.

"So far we have a perfect record of WikiLeaks having never revealed information that exposed a source over 10 years," Assange said.

In the interview, Assange also spoke about the Trump campaign — he'd happily receive any authentic "internal documentation" from it. And when asked about the murder of a DNC staffer early last month, who some have speculated was a WikiLeaks source, Assange repeated that WikiLeaks does not disclose its sources, "even dead sources."