Accessibility links
NPR's 'Noteworthy': Zooming In On The Creative Process, One Artist At A Time Audie Cornish speaks with NPR's Jason King about the new documentary series Noteworthy, in which he profiles prominent musicians and reveals the secrets behind how they write, produce and record. 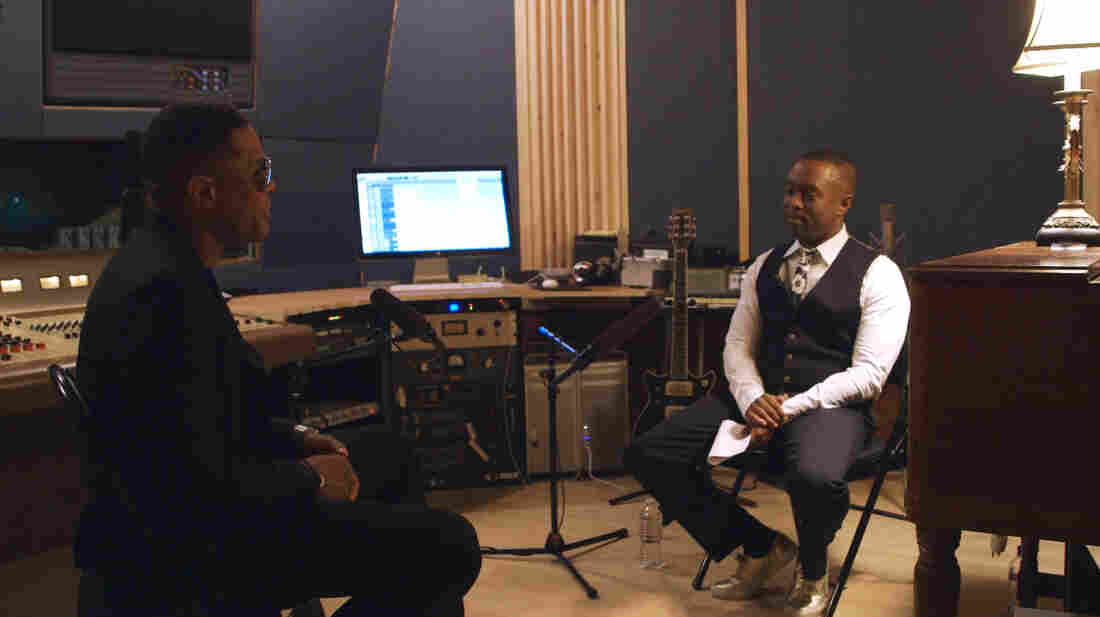 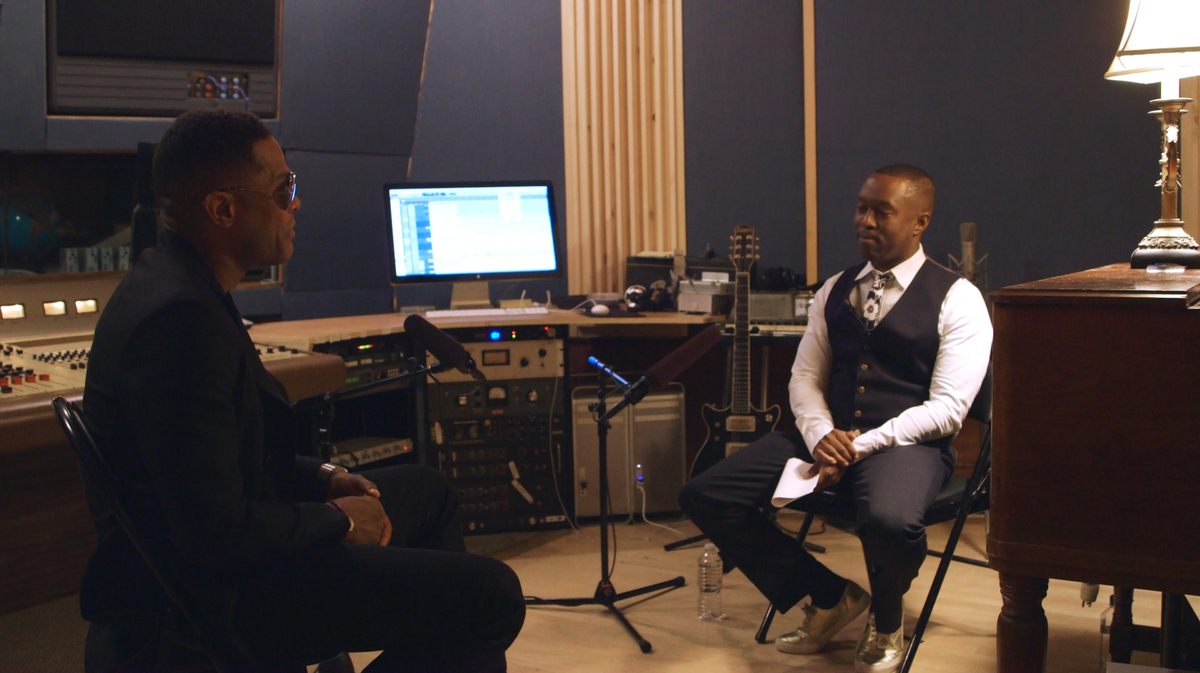 NPR contributor Jason King (right) sits down with R&B star Maxwell in an episode of the documentary series Noteworthy.

The shiny, polished pop of today sometimes sounds effortless, as if it hatched fully realized from the keyboards of genius producers. But just because the technology is different doesn't mean the creative process is.

Noteworthy, a new video documentary series from NPR Music, spends a day with a musician to understand the real work that goes into the creative process: how they get ideas for melodies and lyrics, the places and people that inspire them.

Maxwell And The 20-Year Friendship That Defines His Sound

The host of the series is Jason King, NPR Music contributor and curator of its streaming R&B channel, I'll Take You There. He joined Audie Cornish on All Things Considered to share highlights from his interviews and the surprising things he's discovered in the process of making the series. Hear the radio version at the audio link and read on for an edited version.

Audie Cornish: So, going into this, what were the kind of underlying questions that you wanted answers to? What did you want to find out?

Jason King: The idea for Noteworthy was to go a lot deeper than the traditional sort of junket or press conference where you might talk to an artist — to actually talk to musicians in their home cities, where they feel connected to their creativity.

So for instance, we hopped on a plane and went to visit Anthony Hamilton in North Carolina: spent a full day with him visiting his childhood home, going to the barbershop where he first learned to develop his work ethic. We got on a plane to Los Angeles to meet with Miguel at his beachfront home, which is a kind of sanctuary for him, where he clears his head to be creative. So we were able to take those kinds of trips that allowed us to connect directly to the creativity of these music superstars.

Several of the artists that you've interviewed are known for being perfectionists, for doing a lot of writing or production themselves. When you spoke with Alicia Keys, she talked about what it was like to really learn to collaborate.

"Now I've learned that you try to control things too much and you miss the magic. So that's just been an evolution and a process. But I had to control it at the beginning, I feel, because I wouldn't have been even given a chance, and I don't think I would have made the music that I'm still proud today to play." —Alicia Keys in Noteworthy

So in that interview I did with Alicia Keys, she talked about how, as a teenager, she had a record deal where she was forced to conform to this musical identity that didn't fit her. And so, given that, she tried to become a micromanager and control every aspect of her music. But over time, she had to learn how to collaborate. Even this new record that she's about to release, she's relied on a trusted team of collaborators, including her husband, producer Swizz Beatz.

Alicia actually sat down at her custom-crafted piano and performed for us a new song that's from her forthcoming album called "Hallelujah." ... It was astonishing to watch, and one of the things that I was really excited about was to see her, even before the performance, start to work out some of the chords and basically practice in front of us. We're trying to shine a light on the creative process, and it was great to be able to see her in her element.

Now, these singers and songwriters also talked to you about where they get their ideas. And in this day and age I guess it's unavoidable, given that we're in the season of politics and everything that's going on in the world, that they are very much affected by current events.

Yeah, that theme showed up in a really interesting way in the interview that I did with Miguel, who's mostly known for writing these very sensual songs about love and intimacy. In a lot of ways Miguel has kind of followed up on the legacy of Marvin Gaye, who also made very sensual soul records in the 1970s. But, Marvin Gaye also made this political music: Everybody knows his famous album What's Going On, which directly responded to all these social issues of the time. So for the interview with Miguel, I was really curious about how he feels about the contemporary political situation — like Black Lives Matter protests, the increased attention to police brutality and all the kind of turbulence that's happening. And he responded in a really interesting way.

"I think it's this sense of responsibility that makes [the studio] a little more scary to me. Because I'm measuring up my conscience and what I feel like needs to be spoken about and needs to be brought to light or discussed, and I've never been there like that. What is my way of doing it, to dive deeper?" —Miguel in Noteworthy

Even though Miguel hasn't made a lot of political music throughout his career, he did feel like it was important for him as an artist to make music that, as Nina Simone once said, reflects and synthesizes the times. And after I had this conversation with Miguel, he uploaded a song to his SoundCloud account a couple weeks later called "How Many," and this song, which was sort of off the cuff, was his response to hearing about police shootings of civilians. So one of the things that's been fascinating about Noteworthy as a series is that we're able to capture artists in the moment where they're coming up with these creative and musical responses to the times in which they live.

It's interesting for you to talk about an artist in terms of a legacy like Marvin Gaye, right? You can't have one part of a legacy and not the other.

Exactly. I mean, I think artists are struggling these days to find ways to bring together and synthesize all of the different aspects of who they are — but that's what makes great artists. And so it's interesting to be able to interview artists about how they negotiate that struggle in 2016.

It sometimes seems like these pop stars come out fully formed. What surprised you about the creative process for artists on this level?

One of the things that's really surprising to me about these interviews is to really talk with musicians about all the unseen, unaccounted-for hours and labor that actually goes into making a hit album or hit song. There's times when the process of making music is really intuitive for an artist; it can happen really quickly, like lightning in a bottle. Actually, Miguel talked about how he wrote his Grammy-winning hit "Adorn" in 30 minutes. But generally, creating a hit song or hit record is more like what Quincy Jones would have said: It's like painting a 747 with a toothbrush. It takes a lot of detail, a lot of time, a lot of energy, a lot of unseen hours.