Accessibility links
Book Review: 'The Hike,' By Drew Magary Drew Magary's new novel is the strange story of average guy Ben, whose business meeting at a old country hotel turns into a bizarre odyssey through the woods, full of giant crickets and talking crabs.

'The Hike' Turns Traditional Fairy Tales Inside Out

'The Hike' Turns Traditional Fairy Tales Inside Out 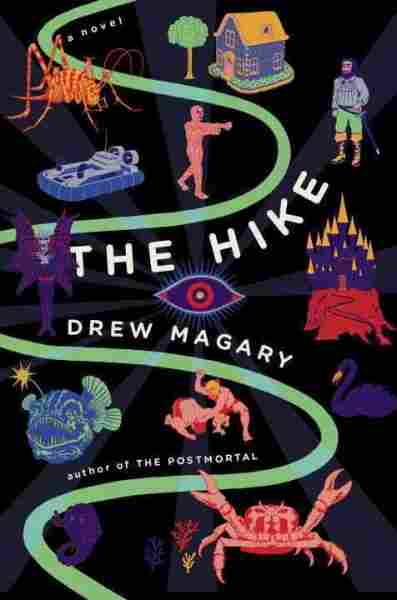 You know what they don't make a lot of? Summer beach books for dudes.

I mean, okay. If you like crime novels, sure. There are always 10,000 of those slumping on the shelves. Military techno/spy WE-ONLY-HAVE-24-HOURS-TO-SAVE-THE-KENTUCKY-DERBY-FROM-ESKIMO-TERRORISTS!-style thrillers? Yeah, I guess there are some of those, too.

But what I'm saying here is that there aren't enough books with hovercrafts. With dwarf-fights. Books for guys who don't care about the specific technical details of the next generation of main battle tanks, but do have bad knees and softening guts, families, jobs, and the vague feeling that somewhere along the way we gave up something big that we didn't understand for a small victory we understand even less.

Here's the good news: Now there is one. It's called The Hike and it's written by Drew Magary (who you might know from GQ, from Deadspin, or from his appearance on the cooking show Chopped, where he played the part of a doofus in a polo shirt so perfectly that it's like he really is just some doofus in a polo shirt). He's the guy who makes fun of your favorite football teams online. Who gleefully destroys children's programming in essays full of bad words and excellent analogies. Who has already written a couple other books, but has now turned his hand to deconstructing (and then maybe having a few drinks and a half-tab of acid before re-constructing) the traditional fairy tale for this weird, modern age in which we live.

It begins with Ben — a man who has a job that's so boring I can't even recall exactly what it was. Ben is 38. He has a wife and three kids in Maryland, but as the tale opens, he has come to a faded country hotel in rural Pennsylvania for some sort of business meeting.

Which is when his entire universe comes un-stuck at the seams.

First thing I loved about The Hike? It happens so fast, this unsticking. And when that moment comes, it's brutal.

"And then he saw the man: a big, hulking man wearing a denim shirt and cheap jeans, dragging a body out of the shed. The corpse was small and clad in a little cupcake nightgown. Her feet were gone."

It goes on. It gets worse. It is precisely as shocking and disorienting as it's supposed to be. There's a chase, a great and believable narrow escape, panic, tears, barfing, a giant cricket.

Yes, a giant cricket. Ben has to fight one. In the attic of a creepy, empty house in the middle of nowhere. With a cheese knife. And that isn't even the weirdest thing that happens on that page because after the cricket comes the talking, grumpy, foul-mouthed crab (named Crab) who becomes Ben's only friend.

What Magary is playing with here (beyond fairy tales, beyond an 8-bit videogame structure of puzzle-item-reward that is predictable but as nostalgically comforting as the shape of a Nintendo controller in the hand) are themes of regret, resilience and dedication.

What Magary is playing with here (beyond fairy tales, beyond an 8-bit videogame structure of puzzle-item-reward that is predictable but as nostalgically comforting as the shape of a Nintendo controller in the hand) are themes of regret, resilience and dedication. There is a path. Ben has to stay on it or he will die. There's an ambiguous promise that if he does this, he will (someday) make it back to his wife and children. Nothing else is given, or even offered (except the occasional lobster dinner).

And look, the whole thing is wildly uneven and sometimes frustratingly basic. There's a drooping middle segment that would've worked fine as a second-act training montage in an eighties movie, but dragged things down on the page. But still, The Hike just works. It's like early, good Chuck Pahlaniuk leeched of all bitterness and class warfare — back when Chuck was still weird and tired and furious. It's like a story you tell yourself on a long drive alone in the dark. It's fun and fast and bizarre, familiar yet completely other.

But the real kicker? Magary underhands a twist in at the end that hits you like a sharp jab at the bell. You'll see stars, I promise, but I don't want to come within a million miles of spoiling for you. It's just that good.

So like Ben, you're just going to have to earn it by getting to the end of the path yourself.