Accessibility links
Riveting 'Obelisk Gate' Shatters The Stillness N.K. Jemisin continues the story of the Stillness — a world constantly rocked by quakes, and the rare, gifted people who can control them — in a second volume even more engrossing than the first. 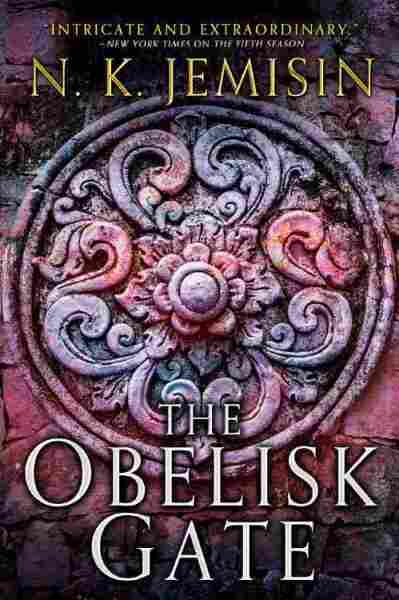 The Obelisk Gate is the second book in a trilogy that makes me forget everything people say about second books in trilogies. By rights it should be full of the things we forgive middle books: necessary stalling; development of characters less interesting than in the first volume but nevertheless plot-critical; all the weary setup of scaffolding from which to launch the finale.

But it isn't. If anything it's even more engrossing than The Fifth Season, picking up right where that first book left off and plunging us deep into the Evil Earth and all its machinations. Not only could I not put it down — I couldn't come up for air long enough to comment on it while forsaking sleep and food in order to finish it.

Spoilers for The Fifth Season will of course follow — these are not stand-alone books by any means. If anything they feel like one smooth story, broken, Scheherezade-like, at their most compelling points.

In the world of the Stillness, earthquakes occur with such devastating frequency that their aftermath is called a Fifth Season: a season of ashy skies, boiled oceans, fauna and flora that change their behavior in accordance with the vicious atmosphere. The world has lasted this long because of orogenes, people born with the ability to manipulate thermodynamics such that they can quell shakes and divert disaster. But orogenes are a feared and oppressed minority among the so-called stills, kept in check by Guardians who can resist and disrupt their power.

We last saw Essun — who was Syenite, who was Damaya — living underground in a strange crystal-ridden community called Castrima, learning that her old friend, mentor and lover, Alabaster — the most powerful orogene in the Stillness — is responsible for the current Season. Drawing power from the incomprehensible obelisks that float in the skies, he tore the continent apart trying to use their power to break the sick social order and begin the enormous work of ending the terrible cycle of Seasons.

But the cost of using the obelisks is high. Alabaster is slowly turning into stone, and Essun needs to learn all she can from him if she's to complete the work he began, and end the Seasons once and for all. The short time they have together is troubled: Enemies press Castrima on all sides, threatening the fragile peace between orogenes and stills. And somewhere in the world, Essun's lost daughter is coming into her own immense orogenic power, undergoing a strange and dangerous education of her own.

Beyond the meticulous pacing, the thorough character work, and the staggering ambition and revelations of the narration, Jemisin is telling a story of our present, our failures, our actions in the face of repeated trauma, our responses to the heat and pressure of our times.

This book is riveting. I can say with authority that the transition from The Fifth Season is seamless, because I read the books back to back and already have trouble remembering which events were in each; I can't even fathom what it must have been like for readers to finish The Fifth Season without having The Obelisk Gate nearby to dive into. Except I can, a little — The Obelisk Gate ends at the edge of another precipice, but it is less a lightning strike of shock than it is a gathering of clouds, a crackling of building static to burst in The Season of Stillness next year.

It feels in many ways presumptuous and patronizing to applaud the maturation of a writer's work, as if I, the reviewer, stand beyond some literary finish line prepared to award a novelist her laurels. But I don't know how else to speak to the awe I feel, having followed the unfolding of The Hundred Thousand Kingdoms series — which I thoroughly enjoyed — into this. Every insight is deeper, every observation sharper. Beyond the meticulous pacing, the thorough character work, and the staggering ambition and revelations of the narration, Jemisin is telling a story of our present, our failures, our actions in the face of repeated trauma, our responses to the heat and pressure of our times. Her accomplishment in this series is tremendous. It pole vaults over the expectations I had for what epic fantasy should be and stands in magnificent testimony to what it could be.

The Obelisk Gate is dedicated "To those who have no choice but to prepare their children for the battlefield." With these books, Jemisin facets diamonds out of the hot mess of our world.