Accessibility links
Donald Trump Expresses 'Regret' For Saying The Wrong Thing The Republican nominee has landed in controversy after controversy. Thursday night, after shaking up his campaign, Trump acknowledged regret for sometimes causing "pain" with his words. 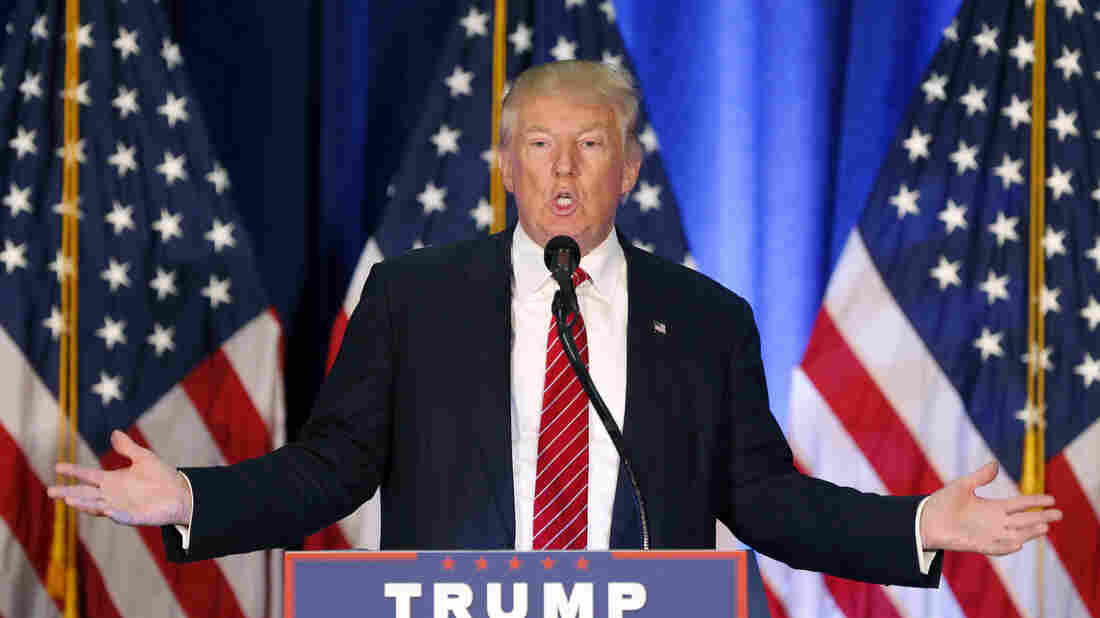 Donald Trump, the Republican Party's presidential nominee, said Thursday night that he had "regret" for choosing the wrong words that have caused "pain" during the 2016 campaign. Gerald Herbert/AP hide caption 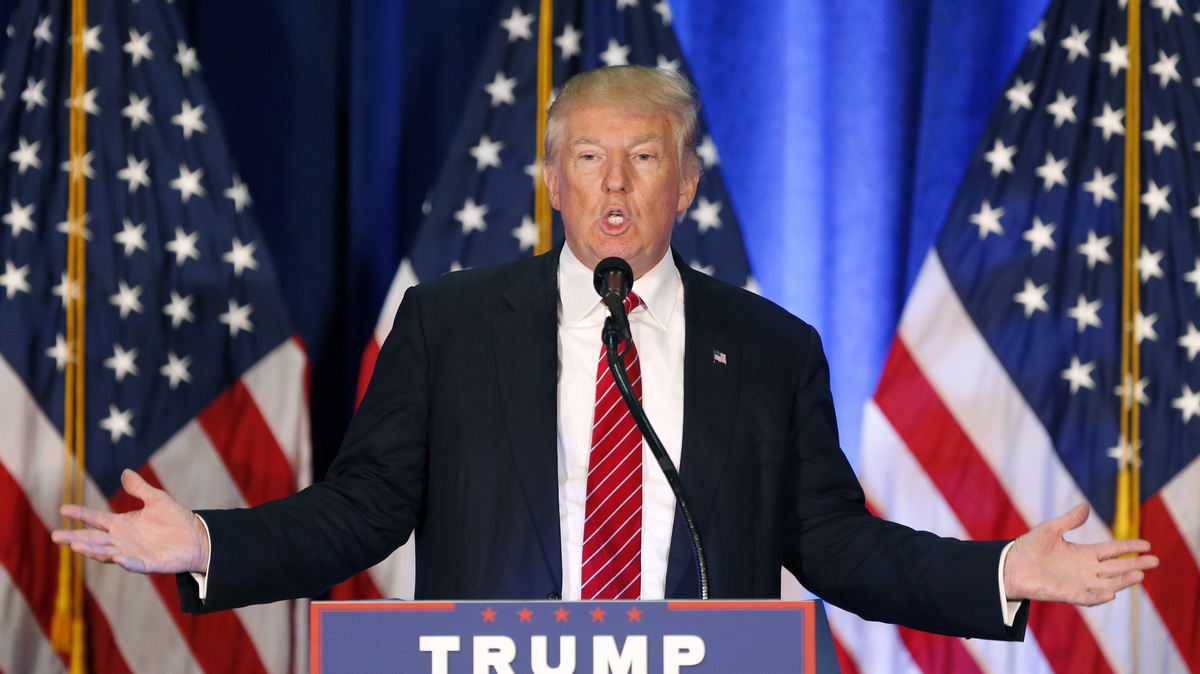 Donald Trump, the Republican Party's presidential nominee, said Thursday night that he had "regret" for choosing the wrong words that have caused "pain" during the 2016 campaign.

Trump Shakes Up Top Campaign Staff, With Less Than 3 Months To Election Day

In an effort to save his flagging presidential candidacy, and two days after shaking up his campaign, Donald Trump expressed "regret" for sometimes saying the wrong thing and causing "pain."

"Sometimes, in the heat of debate and speaking on a multitude of issues, you don't choose the right words or you say the wrong thing," Trump said, reading from a teleprompter at a campaign event Thursday night in Charlotte, N.C. "I have done that, and I regret it, particularly where it may have caused personal pain. Too much is at stake for us to be consumed with these issues."

TRUMP: Sometimes speaking in the heat of debate you say the wrong thing. I've done that. I regret it.https://t.co/PT3rHl6gEJ

It is a remarkable statement from a man not known for outward self-reflection or admitting fault. Quite the opposite — he has come to embody political incorrectness and the visceral emotion of an angry sect of the electorate. He said during the primary campaign, in fact, he was proud to carry the "mantle of anger."

As recently as four days ago, Trump tweeted, "I am who I am."

The failing @nytimes, which never spoke to me, keeps saying that I am saying to advisers that I will change. False, I am who I am-never said

But he has faced withering criticism this past month — even from within his own party — for everything from picking a fight with the family of a Muslim American soldier killed in Iraq to saying that "Second Amendment people" might be able to do something about his opponent, Hillary Clinton, and that President Obama is the "founder" of ISIS.

And he has suffered in the polls because of it. He has dropped precipitously in battleground states, to the point that Clinton is now leading in every competitive state, including in usually right-leaning Georgia.

Party leaders and insiders have been urging Trump to shift at least his tone, and this could be the beginning of that. CNN reported that, on Friday, Trump and his vice presidential pick, Mike Pence, will visit flood-ravaged areas in Louisiana. President Obama is vacationing on Martha's Vineyard and has faced criticism from a Louisiana newspaper for not visiting.

A Guide To The Many Conspiracy Theories Donald Trump Has Embraced

The Clinton campaign pushed back quickly to Trump's speech.

"Donald Trump literally started his campaign by insulting people," said Christina Reynolds, deputy communications director, in a statement. "He has continued to do so through each of the 428 days from then until now, without shame or regret. We learned tonight that his speechwriter and teleprompter knows he has much for which he should apologize. But that apology tonight is simply a well-written phrase until he tells us which of his many offensive, bullying and divisive comments he regrets — and changes his tune altogether."

Some, including CNN's Anderson Cooper and The Washington Post's Robert Costa, reported that Trump drove the "regret" line, not a speechwriter.

I'm also told that Trump personally decided to express regret tonight and brought riff to Conway, Manafort as something he wanted to do...

But Costa notes there's skepticism that that's the case.

But calling around just now, there is skepticism in Trump's orbit that he drove this. Tonight's speech was right out of Conway's playbook.

Trump began tonight to reframe and repackage his message on a host of issues. In addition to expressing "regret," he also tried to express sympathy, saying he has "no patience for injustice, no tolerance for government incompetence."

Whether or not Trump wrote these lines, Trump adviser Jack Kingston, a GOP congressman from Georgia, saw the influence of his new campaign manager, Kellyanne Conway. "Her signature was all over it," Kingston told CNN. Conway is known for her work targeting female voters — with whom Trump needs to make up a lot of ground to be competitive — and her new role involves traveling with Trump and advising him in real time.

Trump even tried to reach out to nonwhite voters: "Nearly 4 in 10 African-American children are living in poverty. I will not rest until children of every color in this country are fully included in the American Dream."

He also tried in parts to strike a hopeful tone: "Our whole country loses when young people of limitless potential are denied the opportunity to contribute their talents because we failed to provide them the opportunities they deserved. Let our children be dreamers too."

That stands in stark contrast to the dark tone he set for much of his campaign and in his acceptance speech at the Republican National Convention in Cleveland. Longtime Republicans lamented that Trump had appeared to cede hope, as a theme, to Democrats.

But if it will last is very much an open question. Even on Thursday, his national campaign spokeswoman was on cable news claiming that Hillary Clinton is suffering from dysphasia, a type of brain damage. It's the kind of conspiracy theory, backed by no evidence, that Trump has touted through this campaign and since he rose to right-wing prominence by raising false questions about President Obama's place of birth. (The president was born in Hawaii.)

There has been a usual pattern from Trump — to say outrageous comments that land him in hot water, followed by party leaders and his family sitting him down urging him to rein it in, then Trump getting itchy, throwing out the script and landing in more controversy.

Trump may be learning that all headlines aren't good for his brand. But his hiring of Stephen Bannon — the former head of Breitbart News who subscribes to a take-no-prisoners approach to politics — as his campaign CEO does not lend to the idea of a Trump who won't be Trump.

What's more, how much damage has already been done? How much of the controversies — of Trump's own creation — will be forgotten or erased? It's not possible for Trump to rewind the past three weeks, but he hopes that he can win back at least some of those supporters who propelled him into the lead in some polls after the Republican convention.

There are 11 weeks to go, and it's all about to be tested.

Here's a broader section of Trump's "regret" remarks (you can click here to read his entire prepared remarks, as released by the campaign):

"As you know, I am not a politician. I have worked in business, creating jobs and rebuilding neighborhoods my entire adult life. I've never wanted to learn the language of the insiders, and I've never been politically correct — it takes far too much time, and can often make more difficult.

"Sometimes, in the heat of debate and speaking on a multitude of issues, you don't choose the right words or you say the wrong thing. I have done that, and I regret it, particularly where it may have caused personal pain. Too much is at stake for us to be consumed with these issues.

"Our campaign is about representing the great majority of Americans — Republicans, Democrats, Independents, Conservatives and Liberals — who read the newspaper, or turn on the TV, and don't hear anyone speaking for them. All they hear are insiders fighting for insiders.

"These are the forgotten men and women in our society, and they are angry at so much on so many levels. The poverty, the unemployment, the failing schools, the jobs moving to other countries. I am fighting for these forgotten Americans."