Accessibility links
Amy Schumer Bares Her Soul In 'The Girl With The Lower Back Tattoo' Schumer's new essay collection is revealing, packed with personal diary entries going back to her preteen years — and funny. But she doesn't shy away from difficult topics like her sexual assault. 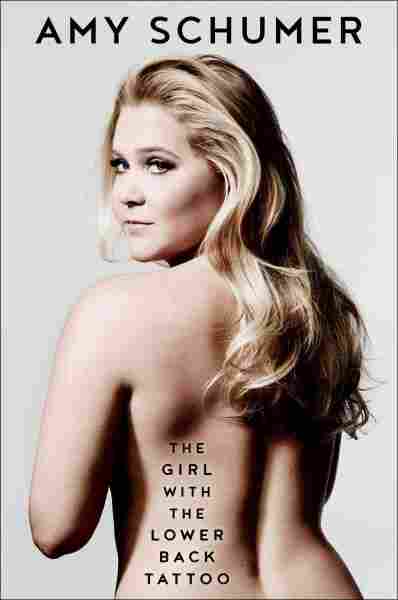 The Girl With the Lower Back Tattoo

Title
The Girl With the Lower Back Tattoo
Author
Amy Schumer

Editor's note: This interview contains adult themes, including a discussion of sexual assault.

Amy Schumer is tired of answering a question journalists ask her all the time: Is this a good moment for women in Hollywood?

"It is an amazing moment for every woman," she tells NPR's David Greene, "if you have ovaries and you're in the 90210 ZIP code."

One reason Schumer hates that question: She's a New Yorker. The other? She thinks women generally have it tough all the time. And speaking up — about sex, gender stereotypes, crazy, unrealistic expectations for women and their appearance — is a signature of her comedy.

Schumer was already a comedy star the last time she spoke to NPR a few years ago. Then, last year, Trainwreck — the movie she wrote and starred in, somewhat inspired by her own life — was a hit. And she got really famous.

Now, she's written a memoir, The Girl with the Lower Back Tattoo (and, yes, she has one).

Like her comedy, the book is revealing. She shares excerpts from her personal diaries going back to her preteen years, complete with footnotes from present-day Amy (young Amy dreamed of living in New York and making money acting and bartending, all of which she's done).

Schumer says she always knew she was funny. "I only remember loving making people laugh. And making myself laugh."

On being a comedian and an introvert

I think standup is pretty good for an introvert, because you are performing, but, I mean, it's on your own terms. There are so many people in the room, but it's a one-sided conversation. And you actually don't have to interact, unless you want to. ... I don't want to pull the curtain back, but comedians do want laughs. That is the goal. Being introverted, it doesn't mean necessarily being shy or being afraid of public speaking, it just means that it's hard for me to interact with people for too long.

Talking about this in the book, it's a lot and it's risky, and then people say, "You didn't use the word rape." People ... they just want a pull quote. They want clickbait. And so just talking about being sexually assaulted in any way, you know, for women, it's never like, "Oh, I'm really sorry that happened to you." Which is really how it should be, and how you would think it would be. But it's more, we look for problems we have with how that woman has spoken about her sexual assault.

I call it "grape," because it's this gray area. Not of whether or not it was rape, but it's not the way we think of, like, a Law and Order episode. And when it's not as black and white for everyone, it makes it harder for them to digest. So it's this very personal thing to me, that I decided to share. And I'm only looking for people to feel less alone reading it, and maybe for a guy to read it and think, "Oh." Maybe that'll stop somebody in their tracks, I don't know.

Not enough. Things are being talked about more than they used to be, things like the wage gap. ... I do talk about sex because I do think that a lot of things translate from the bedroom into how you live your everyday life. Like, as a woman, I think that a lot of women are in relationships where they're with someone who doesn't make sure that they orgasm. And the woman doesn't make it important ... and I think that translates to the office, where you should demand to be spoken to and treated equally to men. I feel like there won't be enough change ... until there's no wage gap, and until someone says "You're my favorite comic," not "You're my favorite female comic."