In 'Ghost Talkers,' The Spies Are Actual Spooks

In 'Ghost Talkers,' The Spies Are Actual Spooks 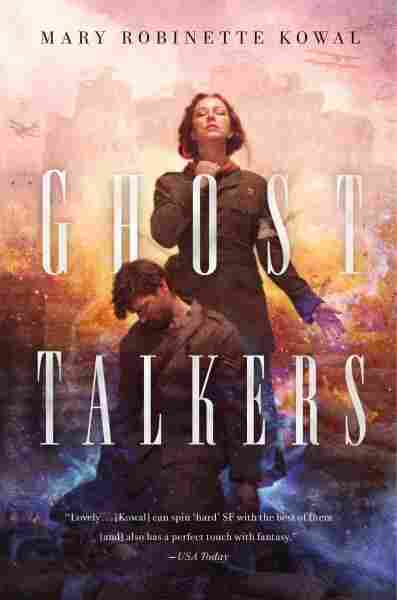 Look, I am solidly a ray-guns-and-spaceships kind of genre nerd. Never been much for fantasy done after the 1970s (it mostly sounds like bad Tolkien). Never cared much for ghost stories or alternate histories or love stories or horror.

Which is why, on the surface, it might seem odd that I was so thoroughly taken in by Mary Robinette Kowal's newest novel, Ghost Talkers. I mean, it's essentially an alternate history love story with ghosts in it. Lots and lots of ghosts. And therefore falls firmly into that sprawling pile of Stuff I Wouldn't Read On A Bet.

Except check this out: The hook for it? It's World War I and the British have a whole division called the Spirit Corps who contribute to the war effort by talking to the ghosts of (very) recently dead soldiers in order to gain intelligence about the goings-on at the front. Where did the bullet come from that killed you? At what angle did it enter? Did you hear the crack of the shot? See the German who shot you?

The mediums take reports from every soldier killed. It's a grind of a job and Kowal makes you feel it — makes it almost forensic, almost scientific, in its application. The information taken down by the mediums is all intelligence, and it is used to direct fire, to plan attacks, to shift defenses. It figures into strategy on both sides, and there's nothing hand-wavey about it. Very little that seems mushy and spiritualist. This is a hard job done by those few volunteers who have a sensitivity for the work, and it is vital.

It was the idea of it that got me into the book, and Kowal's affectless presentation of the mediums and their work that kept me going. Did it help that the main plot concerns American heiress Ginger Stuyvesant (a working medium, exhausted and burnt-out by the stresses of experiencing the deaths of hundreds of young men) and her fiancé, British intelligence agent Benjamin Hartford? Of course it did. I like a good spy story as much as anyone (even without spaceships). And once things get going, Ghost Talkers has a good thrust with the Germans trying to discover the location of the Spirit Corps, a highly-placed mole in the British command, secret murderers, double crosses, codes and ciphers.

... it was that rare ability of Kowal's to make what could have been a completely goofy add-on to the British war effort into something that felt completely wedded and solid that sold me — that spark of a great idea, well-executed.

But it was that rare ability of Kowal's to make what could have been a completely goofy add-on to the British war effort into something that felt completely wedded and solid that sold me — that spark of a great idea, well-executed. It is a story that just works. That lays out a presumption (ghosts are real), builds a plot architecture around it (they might be useful intelligence assets), and then grounds it with emotional weight (those forced to talk to the ghosts of the young and dead might not come out of it unscathed).

The book has flaws, of course. For every deeply considered character like Ginger or her fiancé, there are two who are adorable stereotypes (the excellent Lady Penfold, for example — a professional gossip, titular head of the Corps and, essentially, Downton Abbey's Dowager Countess with a sense of humor and a pistol), and one who is just plain cardboard, like the harrumphing, mustache-twirling, tea-and-crumpets marionette of a general who seems to exist solely to tell Ginger she's being hysterical at every opportunity. And because of some baked-in deus ex machina, there is rarely a moment where it feels as though Ginger is in any real danger (with one notable exception late in the novel).

But still, the plot moves. The ghosts stack up. With the aid of her fiancé and his stuttering personal aide, Ginger travels from the relative safety of Le Havre to the trenches of the front, to POW camps and beyond. There's an undeniable momentum to Kowal's writing, and even in the rough spots, she keeps it going with Ginger's pluck, some spy-vs-spy cleverness and a couple of surprising betrayals.

Still, it's unfortunate, these weaknesses at the center of things. Because Kowal does such a stellar job with making the ridiculous seem grounded. She has the mechanics of ghosts down pat. The history of spiritualism. The shadowy life of ghostly spies.

It's only the real people that occasionally trip her up.