Accessibility links
Book Review: 'Breath Of Earth,' By Beth Cato Beth Cato's new book is set in an alternate version of San Francisco where geopolitical intrigue and homegrown unrest complicate a young earth magician's attempt to head off the great quake of 1906.

'Breath Of Earth' Is A Brisk, Relevant Alt-History Barnstormer

'Breath Of Earth' Is A Brisk, Relevant Alt-History Barnstormer 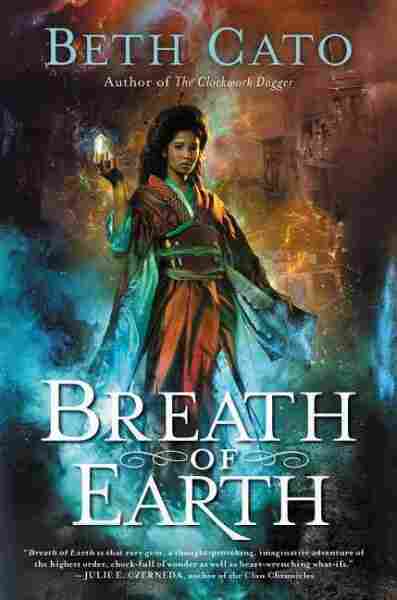 More than a century later, the 1906 San Francisco earthquake remains a dramatic, traumatic moment in American history. That makes it the perfect vector for an alternate history novel — a potential that isn't lost on Beth Cato. In her latest novel, Breath of Earth, the Nebula-nominated author casts off from the wholly fabricated fantasy world of her acclaimed steampunk duology, The Clockwork Dagger and The Clockwork Crown. Instead, she sets Breath of Earth at the center — indeed, the epicenter — of a magic-infused, reality-warped version of San Francisco circa 1906. In so many ways, it's a city on the brink. And Cato doesn't let you forget that for a second.

Breath of Earth opens on April 15, 1906, three days before the quake took place in our world. Cato's world, though, is strikingly not ours. Following Japan's intervention in the U.S. Civil War, which included military aid in the form of magic, the two countries formed an alliance called the Unified Pacific. Since then, the superpower has consolidated its hold on the globe through its use of geomancy: magic drawn from the energy of the earth itself. By 1906, the Unified Pacific is waging a never-ending war with rival power China, leading to the oppression of Chinese-Americans on the West Coast. Ingrid Carmichael is a 25-year-old secretary to Warden Sakaguchi of the Earth Wardens Cordilleran Auxiliary, a group that uses geomancy for the public good — so long as it aligns with the interests of the Unified Pacific.

When the Auxiliary is mysteriously attacked, the headstrong Ingrid begins owning her considerable geomantic power, which she's had to suppress due to the sexism of the age. And as she struggles through a web of homegrown unrest and geopolitical intrigue, a dashing Southerner named Cy Jennings sparks feelings she's not ready to deal with. Cato already proved her expertise as weaving romance with adventure in her Clockwork books, and in Breath of Earth, she keeps that chemistry breezy; in fact, the book as a whole strikes a nervy balance between easygoing charm and suspense, especially as the four-day-long plot counts down to the fateful quake that threatens to destroy much more than a chunk of San Francisco.

Cato's exhaustive research of the time and place gives the book texture and grit, and she hasn't whitewashed what was a very problematic chapter of America's history.

As brisk as Cato's plot is, it's also straightforwardly simple. But she embroiders it richly with gorgeous period setpieces, imaginative speculation and the charismatic Ingrid herself, a hero-coming-into-her-own full of gumption and dimension. Cato's system of earth-based magic is fun to dig into, so to speak, and she injects plenty of swashbuckling action into her conceptual playground. There's even some good-old-fashioned, goggles-and-airships steampunk barnstorming to sink your teeth into, another welcome holdover from the Clockwork books.

Where Breath of Earth really shines, though, is in its detail and relevance. Cato's exhaustive research of the time and place gives the book texture and grit, and she hasn't whitewashed what was a very problematic chapter of America's history. She spotlights the plight of the Chinese-American population of the West Coast in the early 20th century with sensitivity and attention; at the same time, that tension becomes essential to the story, especially as it boils over into the streets of San Francisco. Historical figures like Teddy Roosevelt weave throughout the story with neat twists. And the book speaks to this century, too. It may take place in an alternate universe over a hundred years ago, but it deals with the issues of xenophobia, racism, sexism and anti-immigrant hatred set against a backdrop of perpetual war, a situation that feels familiar today. Rather than taking a soapbox stand, Breath of Earth makes its points as a witty, charming adventure yarn — one that's only as escapist as you want to be.