Accessibility links
Great Lakes Waters Can Take A Savage Toll On Swimmers High winds and dangerous rip currents make swimming in the Great Lakes unpredictable, and sometimes deadly — most beaches have no lifeguards, and hundreds drown in the lakes each year. 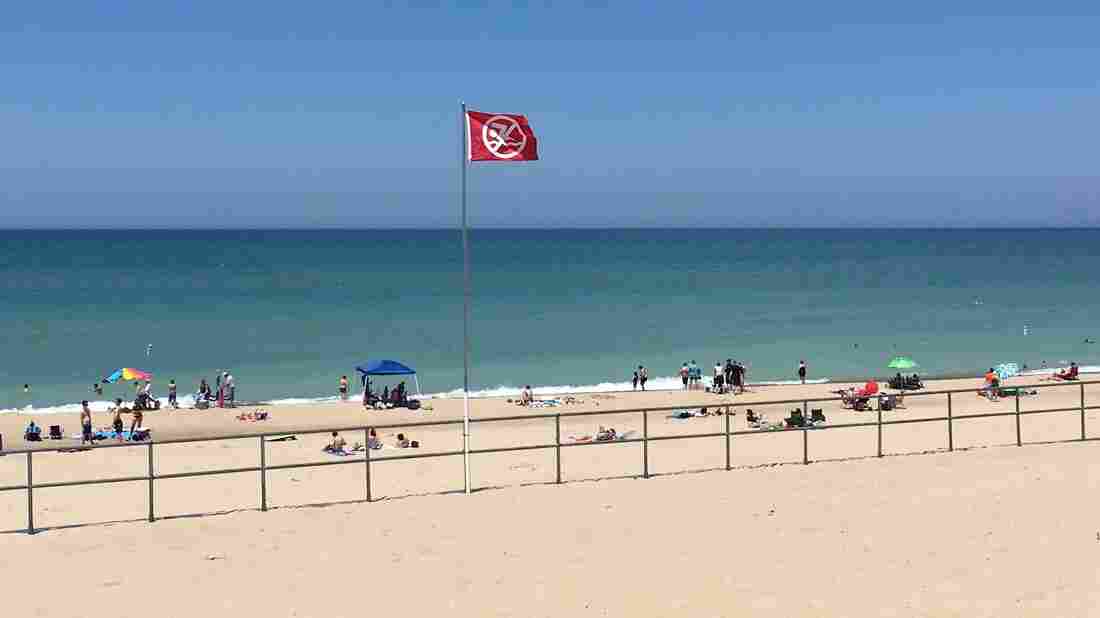 A red flag flies over Warren Dunes beach in western Michigan, warning visitors of a high risk of drowning. Like many Great Lakes beaches, Warren Dunes has no lifeguards on duty. Elizabeth Miller/WCPN ideastream hide caption 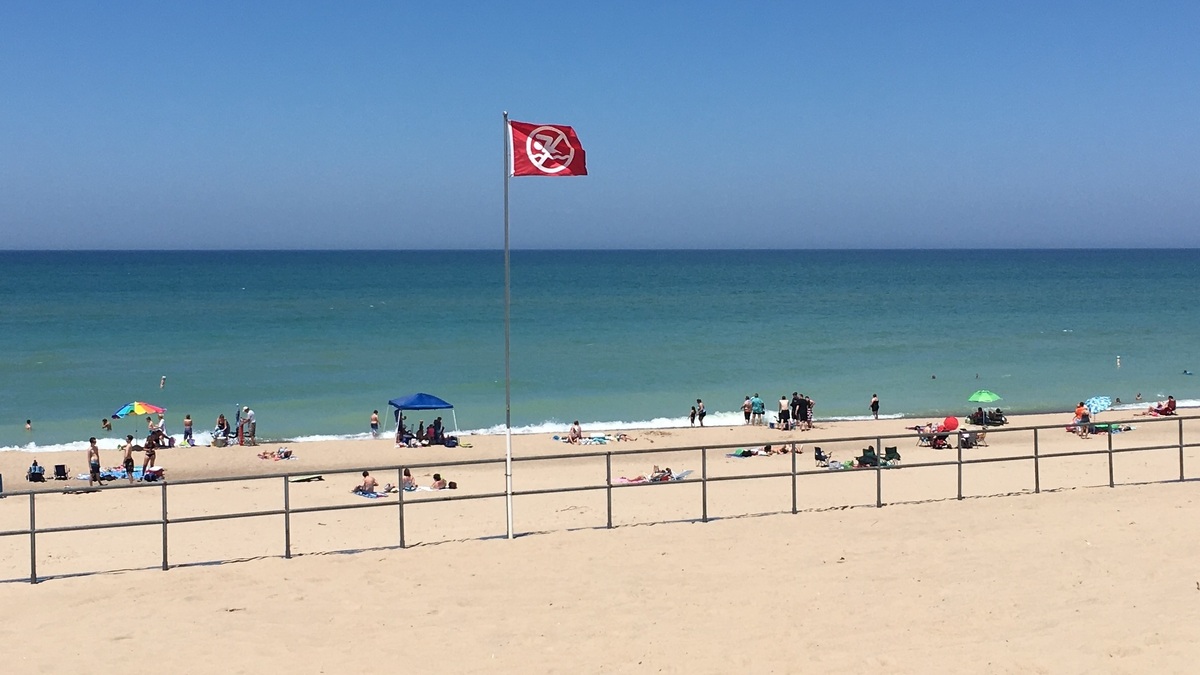 A red flag flies over Warren Dunes beach in western Michigan, warning visitors of a high risk of drowning. Like many Great Lakes beaches, Warren Dunes has no lifeguards on duty.

The Great Lakes have more coastline for beaches than the United States' East and West coasts combined. There are thousands of beaches — and dozens of drownings each year, in part because of dangerous currents that are very different from those found in the ocean.

The five Great Lakes border eight states and one Canadian province. They're used for commercial shipping and fishing, and for recreational boating and swimming. There's even surfing — but the high waves on these waters can be especially dangerous.

According to the Great Lakes Surf Rescue Project, 69 people have died in those waters so far this year, already surpassing the 55 total deaths from 2015.

"It can start out pretty calm," he says. "Pretty soon it picks up — you know, you're out there just enjoying the beach, and you're not really thinking about it. And all of a sudden, man, the waves have come way up from what they were when you first started."

The waves come more frequently in the Great Lakes. They typically last three to five seconds, while in the ocean, waves last about 10 seconds or longer. And while the waves may look similar, they combine with the wind to produce dangerous currents.

"When you have really strong winds blowing from the west, or the northwest, or the southwest, that causes the water to pile up near the beaches on western Michigan," Dodson says. "You'll get better water piling up, you have a better chance for currents to develop."

And the currents aren't always visible from shore. Rip currents — caused by a break in the sandbar underneath the water — can knock you off your feet, pulling you into open waters.

Experts say at least 20 people have drowned in Lake Michigan every year since 2010, more than any other Great Lake. At the more than 200 beaches in the state, efforts are underway to try to prevent drownings — things like flags and signs warning beachgoers when it's not safe to swim. But that doesn't mean swimmers obey them.

On a recent red-flag day at Michigan's Warren Dunes State Park, 50 miles across the lake from Chicago, beachgoers like Pam Shutts didn't let the chance of dangerous currents keep her or her two daughters out of the water.

"We know there's no lifeguards, so we kind of police each other and kind of keep tabs on where they are," she said.

There are no lifeguards at any of Michigan's state parks — Warren Dunes and most other Great Lakes beaches rely on signs. Michigan is working to make those easier to read, but Bob Pratt, executive director of education for the Great Lakes Surf Rescue Project, says it's difficult to know if the signs keep visitors any safer.

His group holds water safety courses all across the Great Lakes, showing kayakers and others how to use everyday objects that float — things like footballs and plastic coolers — to help people struggling against a current. The Coast Guard provides similar courses, sending teams to schools across the region.

And while advocating safe swimming on the Great Lakes remains a challenge, officials at the Great Lakes Surf Rescue Project, U.S. Lifesaving Association and other organizations continue to push for lifeguards at every beach. 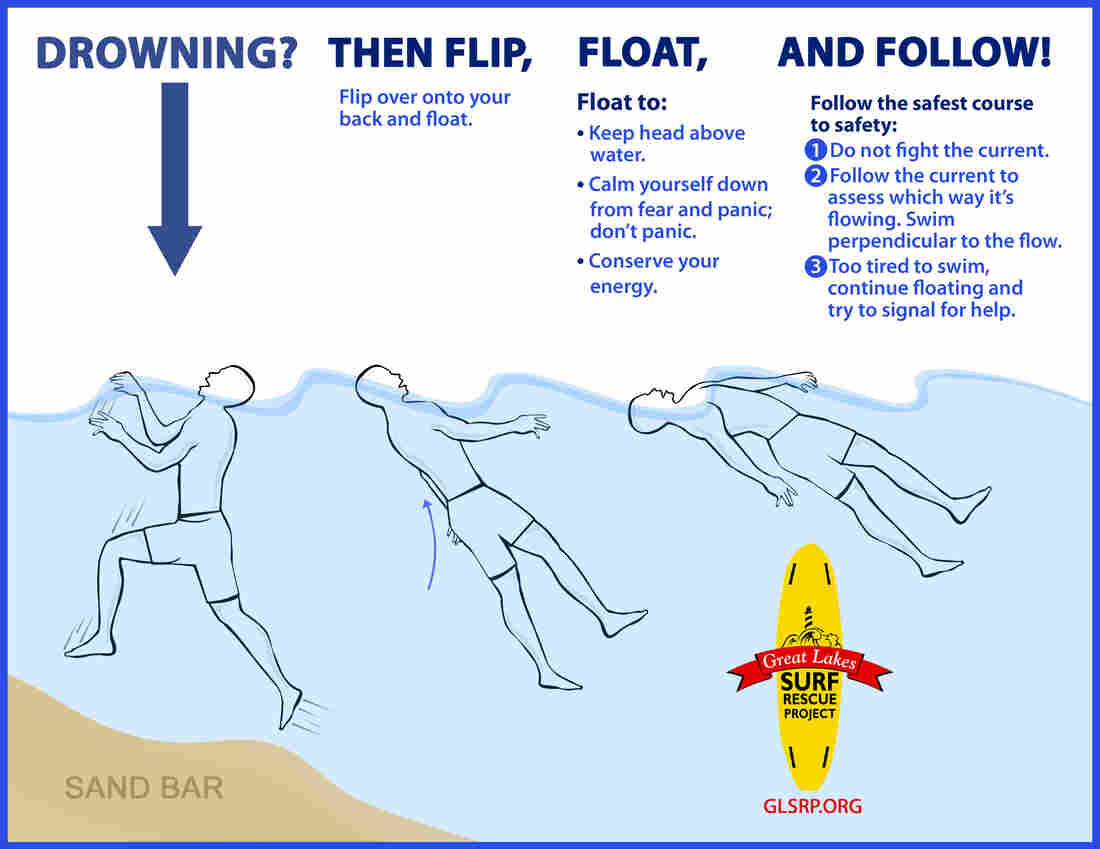 In the audio of this story, as in a previous Web version, we mistakenly say there are hundreds of drownings each year in the Great Lakes. In fact, as the story states, there were 55 such deaths last year and there have been 69 so far this year.