Accessibility links
Actor John Krasinski Takes Stock Of His 'Lottery-Ticket Life' Krasinski says he's thankful for his big break "every single day." Three years after the wrap of The Office, he continues to branch out. He's now directing and co-starring in the film The Hollars. 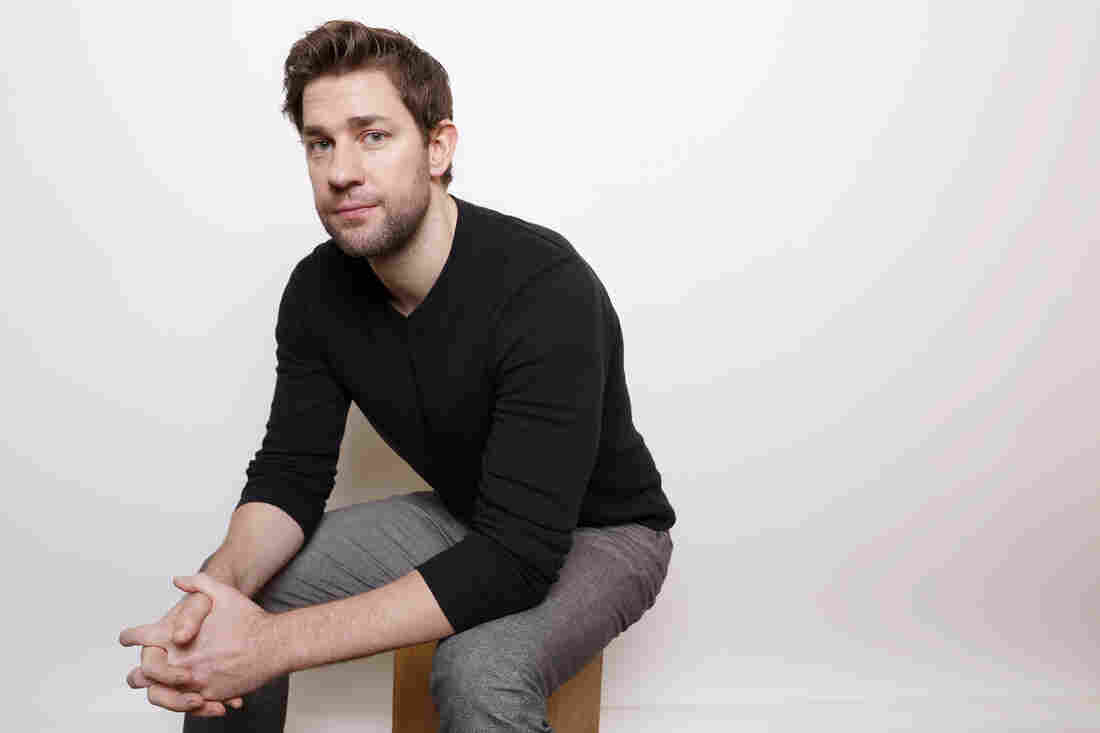 Actor John Krasinski spent 2 1/2 years in New York trying to get his acting career off the ground. After landing a few commercials and some "off- off- off-Broadway" plays, he was about to call it quits. But his mother encouraged him to stick it out a little while longer, and three weeks later, he landed the role of Jim on The Office. Matt Sayles/Matt Sayles/Invision/AP hide caption 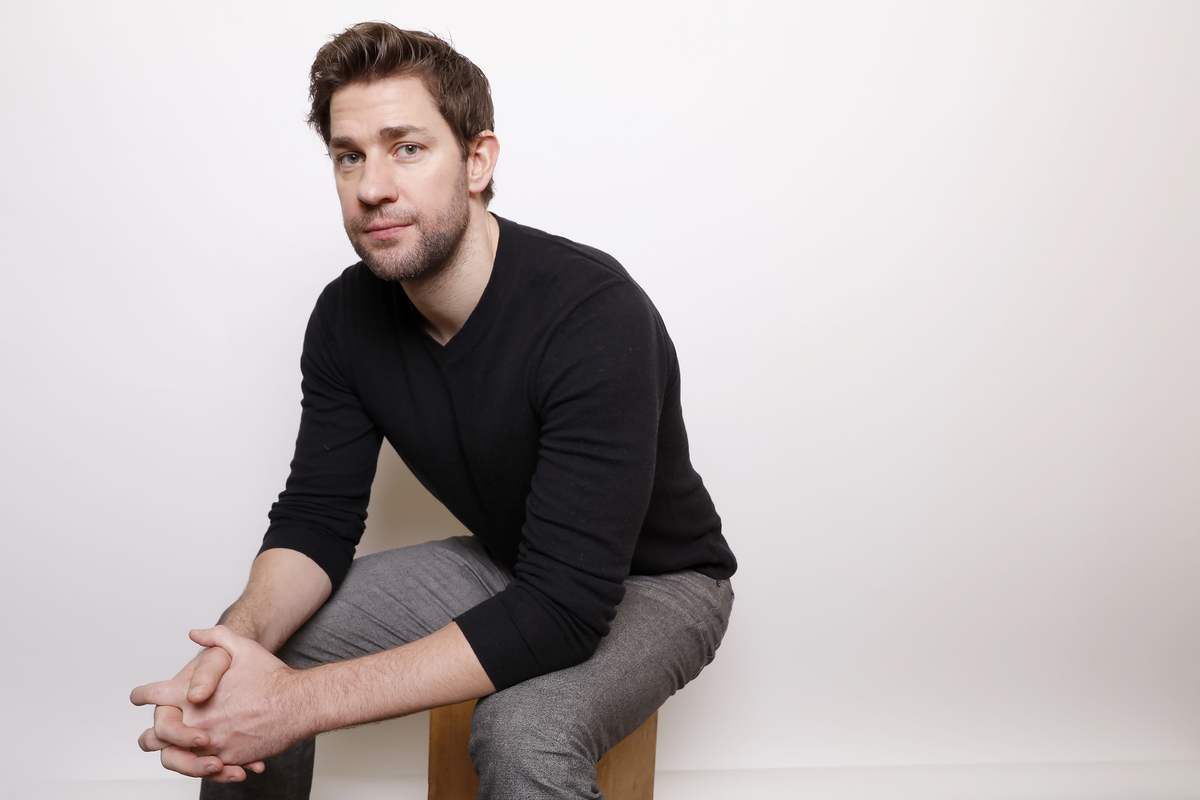 Actor John Krasinski spent 2 1/2 years in New York trying to get his acting career off the ground. After landing a few commercials and some "off- off- off-Broadway" plays, he was about to call it quits. But his mother encouraged him to stick it out a little while longer, and three weeks later, he landed the role of Jim on The Office.

It has been three years since The Office wrapped, and actor John Krasinski, who played Jim Halpert, is still feeling lucky. Landing a role on the NBC comedy series had been an unfathomably big break for the actor, whose previous work had been in a series of commercials and off-Broadway plays.

"I take stock of the fact every single day that I'm living a lottery-ticket life," he tells Fresh Air's Dave Davies. "It's so unbelievably rare to get the opportunity that I did to be on The Office, so what I try to do instead is try to deserve to stay here. That's why I branched out to do writing and directing and producing."

Krasinski's latest project is directing and co-starring in the new film The Hollars. He plays a man who returns home when his mother, played by Margo Martindale, is hospitalized with a brain tumor.

Everybody in this cast was so good. I actually remember actually asking Matt Damon about his experience with Clint Eastwood, and he told me this story about how it was so terrifying working with Clint Eastwood because he only did one or two takes. And one day, Matt said, "Could I ever do another one?" and Clint said, "Anytime you want to do another take, you can, but I'm fine, because I hired you to be the actor I knew you could be." 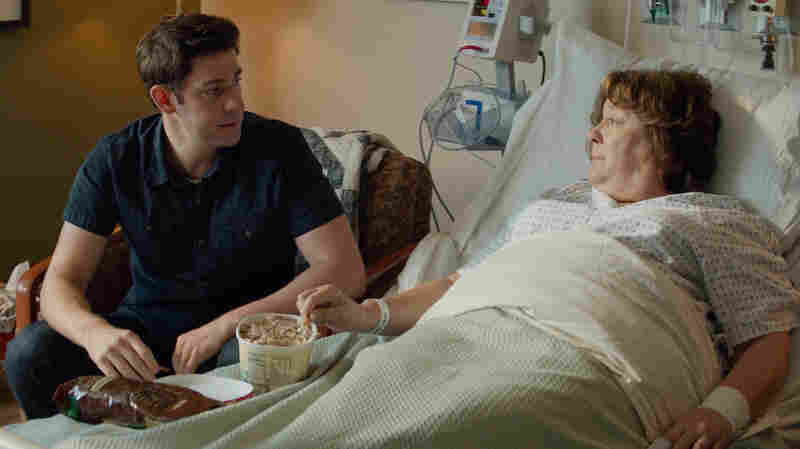 John Krasinski's character returns to his small hometown when his mother (Margo Martindale) is hospitalized with a brain tumor in The Hollars. Sony hide caption 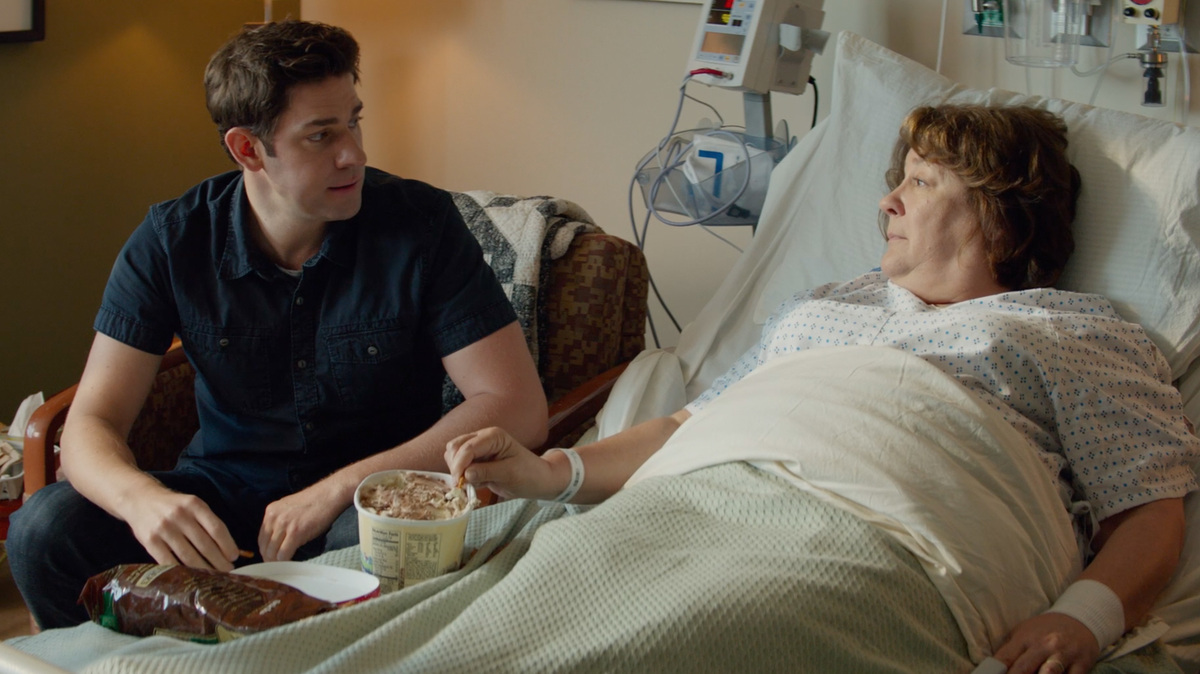 John Krasinski's character returns to his small hometown when his mother (Margo Martindale) is hospitalized with a brain tumor in The Hollars.

I thought that was really interesting, and certainly on this film that applied here, which is, I hired these people that I knew would absolutely shine in these roles, and they certainly did. So it was less about trying to get them to achieve a performance, and much more about trying to create an environment where they could feel safe and empowered to do that performance.

On Martindale playing the matriarch

Very few people are able to communicate a sense of reality. It's almost like she's not acting, certainly in this movie, she's just living through this experience that I think a lot of families have experienced, to have a parent be ill. She brings such humanity and grace to the situation that you feel that you're not watching a movie. At least I sometimes feel like I'm not watching a movie. It almost becomes like you're watching a home movie, and that's a very rare thing to be able to communicate, that she feels like your mom.

On growing up and loving comedy

I think from the age of 6 I tried to never miss a 'Saturday Night Live' — a weird admission I'm making now, on air, because I don't think my parents ever knew ...

I was more of the geeky comedy nerd than anything. I think from the age of 6 I tried to never miss a Saturday Night Live — a weird admission I'm making now, on air, because I don't think my parents ever knew that I was sneaking downstairs to watch every Saturday night. ... I always loved the energy that was coming off Saturday Night Live and things like that.

Growing up, I think that performance and trying to be more of the class clown or trying to be funny for my family was all I really cared about, but I never had the intention of being an actor. Actually, when I went to college I was dead set on being an English teacher, which again, probably came from a movie. I probably saw Dead Poets Society and said, "Oh yeah, just get kids to stand on desks, that sounds like a good life!"

On how his parents reacted when he decided to pursue acting

I remember my parents came to the final performance at this theater school, and the next morning we were driving home, and I hadn't talked about this with them at all, and I just said in the back of the car, I said, "I want to move to New York and be an actor."

And without hesitation my mom said, "Great. Just promise me one thing: That in 2 1/2, three years, if you don't have a bite, if there's not that idea that maybe something's coming, you have to pull yourself out of it, because the only thing you can't ask me to do as your mom is tell her son to give up on his dreams." I thought that was the most profound, unbelievable invitation, and the kindest way to send me out there.

Sure enough, 2 1/2 years later, I actually did call my mom and say, "Well, I gave it a shot. You were right, nothing's really happening." I had done some commercials and some off- off- off-Broadway plays, and I said, "I'm ready to pull out, you were right." And it was about September when I called her, and then she said, "Oh, it's September, just finish out the year!" And three weeks later I got The Office.

On auditioning for the role of Jim Halpert on The Office

I was sitting in line, it was bit of a bizarro, alternate universe feeling, sitting next to six other people who looked exactly like you. And we were all going in for the role of Jim, and they went through the line of the six guys and I was the last person, and the casting director came up and said, "You know, we're just going to take a break for lunch." ... So I watched, you know, 50 to 60 people leave the office. ...

They went down to the restaurant, came back up with salads and sandwiches, all these people came back and one guy sat across from me and said, "Are you nervous?" And I said, "Oh no, you either get these things, or you don't. What I'm really nervous about is them screwing up a perfect show. The Americans always have the ability to screw up these amazing British shows and I'm afraid this is going to be another one of them."

And he said, "Oh great. I'm Greg Daniels, I'm the executive producer." And I genuinely almost threw up right on his shoes. ... He later said, "Honesty is the best policy. It's the reason you got the role."

I think he's still just being nice. I won't dare try it again by going into auditions now saying, "I think this movie's going to be horrible," and then see if they give me the role.

On breaking character and laughing during takes

I'm the least professional actor you can meet when it comes to breaking. I laugh all the time. There are way too many outtakes of me laughing, and I believe, as the Internet has confirmed, I laugh, I think, like a "little princess," is the quote? I laugh like a little princess. ... When I break that much I, for some reason, have a very high-pitched register that I got to say, I embrace it.

I think the rivalry made us become kind of like brothers. I mean, there's that rivalry between brothers, obviously, and it's not necessarily competitive, it's just this free-spirited thing. ...

One of the things that I got nervous about was play fighting with him, because he's a very good actor, but I, for some reason, would always end up injured when we did any play fighting. So there were all these scenes where he would throw snowballs at me and it actually hurt, or he'd go to push me and he'd push me too hard, and I'd actually get hurt. ...

More On 'The Office'

Ricky Gervais On The Original 'Office'

After years and years and years of him doing all these things to me, there was one time where I'm walking through a door and I slap him in the face, and there was no way to fake that, because I had to actually slap him. I had in my head, "This is my full payback for all these years." And Rainn said, "Listen, you can hit me as hard as you need to, don't worry about it." And I said, "OK."

And so the scene you see in the show is as hard as I've ever hit a human being before, and I have no idea why I took that opportunity, other than it was that brotherly thing of "I can't let this happen." So if you go back and watch that scene, you will see Rainn genuinely stunned by how hard I hit him.

I'll never forget ... the cameramen barely remain standing they were laughing so hard, but the assistant cameramen who stand right next to the camera guys making sure they don't bump into anything, fell down on the floor laughing. ... At that moment, I was no longer Jim and he was no longer Dwight, that was John and Rainn's moment.